This is where you can deliberate anything relating to videogames - past, present and future.
Post Reply
1732 posts

Noita devs doing an AMA if you're interested - https://old.reddit.com/r/Games/comments ... _upcoming/


My favorite bug was the deers drowning in their own piss

So back in the day we put some animals and had them roam around in the world. And also they had to urinate from time to time. Because the game is 2D, the urine would fall into these ditches. And what ended up happening is that deers would also hang around in the ditches urinating themselves. Eventually there would be so much urine that deers would drown in it. And the landscape was littered with these ditches full of urine and dead deers. Good times. 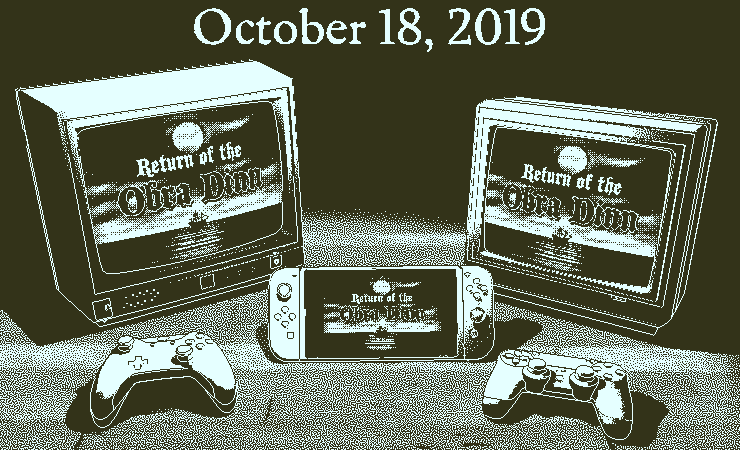 Exciting! Get ready to update your Top 50 lists

Not a big deal to me personally, although these constant announcements and delays within the industry probably speak to a lot of carts being put before a lot of horses behind closed doors. Hope the devs aren't crunching too hard and that the game turns out okay.
Top

Honestly while it’s a real shame it’s delayed, as I’m really looking forward to this, I don’t mind at all.

It’s not as if there’s nothing else to currently play, I’m cool with it taking a little longer.

Pretty sure it’s it’s first delay too isn’t it ?? So that’s perfectly fair.

Only downside is that it’s now got the same release as Animal Crossing - or maybe that’s a good thing....
Top

If I were in charge of Project Unicorn over at KSub Fantasy Studios, I would probably let my employees develop their game in peace at a sane, non-crunchy rhythm. And when the game is all done and properly play-tested and everything, only then would I sit down with the marketing team and decide on when and how to release it while everybody else takes a much deserved few weeks of paid leave. But hey.
Top

That’s what they did with Daikatana.
Top

I’m kinda the exact opposite on the pocket. With the Mega Sg it’s the ability to play my original carts on my HD tv that sells it. I don’t really need that with my handhelds.

Glad it exists, but I don’t need it.
Top

Or you could hack an old Vita.

EDIT: Ah sorry, didn't realise it actually played the carts! (I was also taking about the Analogue Pocket).
Top

Yeah, I understand the system doesn’t suit all needs. I love the Mega SG but doesn’t really suit my requirements.

To be honest, I kind of don’t need my Super NT for the same reasons.

But a single handheld device that can play all my carts, on a backlit screen, in hardware from Analogue, with the performance reputation of Anaolgue - I’m well up for one of those.
Top

Errrr, sorry I kind of missed the link in my original post.

Here’s the Eurogamer report on the news.

A Kamiya-led Okami sequel just got sort of announced!? Ikumi Nakamura (the cool lady from that Tango Gameworks game at last E3, also worked on Okami) has been posting stuff on Twitter hanging out with Kamiya, where they suggest it's happening, or they're trying to make it happen at least. I have a feeling this is just them messing about and it's nothing official, but even this is way closer to an actual confirmation than I'd ever expected to see.

They should just release the second third of the game, nobody would even notice!
Top

This is the most interested I’ve ever been in a Blizzard event.

Sadly, all for the wrong reasons.
Top

I'm surprised it's gone so well and everyone is so well behaved. I mean, that might change. but I'm long past bored now, it's slipping into something more existential.

You can tell they're not ready at all to show diablo 4 but their hands been forced since the phone debacle.
They've been throwing all their resources at this demo, they kept saying that it was a long way off and that this was a first step.
It looks ... drab.
They got the memo that fans wanted something that was more "dark" than diablo 3 so they've just sucked all the colour out of everything.
Didn't look exciting at all, but I suppose these things never do.
Looks like it's always online again, no putting that genie back in the bottle.

Overwatch 2 wasn't exciting either, left 4 dead with robots. I just can't be arsed to even pretend to care about that sort of thing nowadays.

All the people in the audience looked fat and bored. There was a girl in a halloween witch hat and she looked so fucking done with everything

Come on now, you're better than that.
Top

I'm not judging them, I felt an affinity with the crowd. It seemed like an observation worth making. Blizzard games make you feel overfed and overstimulated to the point of boredom, then when we're all slumped there barely breathing through our mouths in a dead eyed stupor, they suck out our souls and sell them on the auction house.

It was just weird seeing it in black and white like that, these are the die hard fans that have come to see the reveal and even they couldn't muster up a hearty fart of enthusiasm.
Seeing their other games that you're not interested in hammers it home. The special ingredient that's missing from those other games is such a tiny little nothing.

I shouldn't have sat in front of that for 2 hours. I don't feel well.
Top
Post Reply
1732 posts