A) get jealous
B) wonder how much money is left in his scrooge mcduck silo!

This made me chuckle too!
Top

I did start collecting Game and Watch, but it’s a very expensive hobby and I ended up selling on most of them.

I kept Donkey Kong, for historical reasons (first ever dpad don’t you know), kept the ones that work but aren’t really in ‘collectible” condition, and also kept Bomb Sweeper cause that game is *really good*.

I have a really good book about the history of Game and Watch (favourite fact: they kept making new games for the US and EU market that they didn’t release in Japan, those ones include the most ridiculous implementation of a side scrolling platformer you’ll ever see that isn’t actually just a game boy game) so I knew which were actually rare and which weren’t.

They’re a fun part of industry history, but very few of them are actually any good.
Top

It’s out of print, as you can tell from those eye watering amazon prices.

I paid cover price for it when it was first published, sadly the later volumes were never translated to English. (it’s from a French publisher)
Top

I’d heard about the D-Pad innovation but had no idea that they had a side scrolling G&W. Madness.

I have a friend that picked up nearly all of the common versions some time ago in a charity shop for 25p each.

I do like the Game & Watches, I think it’s the way that they are built and their styling, really premium for what they were in the time that they were released.
Top

My favourite Game and Watch is the little proto-Switch.

The Super Mario game and Watch (as opposed to other Mario ones like cement factory and the one in the bottling plant) looks like this:

Another one from late on that did some very complex things is Gold Cliff. Here’s a video of that:

Ooh... I want Balloon Fight as I had that as a bairn and somehow don't have it anymore. Major nostalgia for that. Just the normal one, not the weird "Crystal" one that's all expensive, I'd bet it's still pretty pricey though.

Had a check today and no Balloon Fight, but I think all the Nintendo ones started at ¥20,000, so yeah they’re a bit pricey!

EDIT- Though that awesome Super Mario Bros. one Flabyo shared the video of was. Box and all! I’ll check how much it is next time I go.
Top

Been going back and forth on it for a while, but I’ve finally caved and put in a pre-order for the Analogue Mega Sg. I have stacks of megadrive carts but my modded machine is very flaky now, and I’ve no idea how much longer my ancient NTSC 60hz crt will last anyway.

Analogue take a different approach to a lot of modern ‘retro’ console makers, rather than just put together a Linux box running emulation software they’ve instead used a hardware based system, they essentially recreate the original hardware on new silicon.

The megadrive is notorious for having audio that is a bugger to emulate, this apparently nails it. We shall see. In April.
Top

I have the Analogue Super NT and it’s a fabulous piece of kit - I’m sure the Mega SG will be equally as good.

Looking forward to hearing how you get on with it.

I went for the EU colours in the end, I don’t have any particular preference.
Top

Today was a good day. 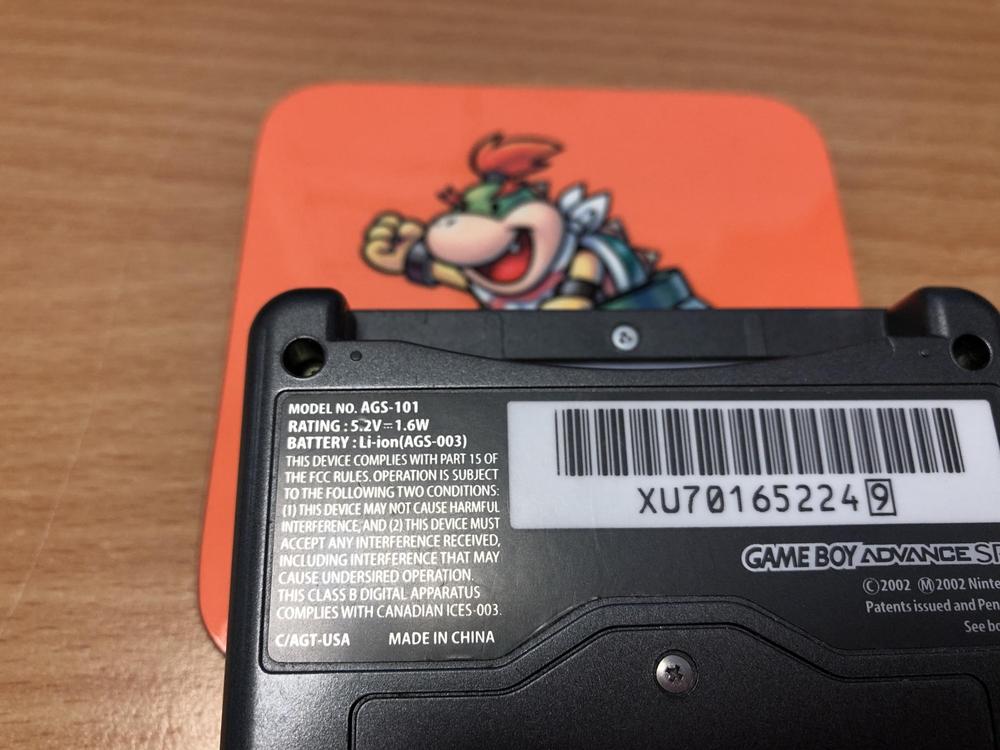 As someone who enjoys gaming hardware in a similar way to the actual games, I've always been drawn Nintendo's handheld hardware, it's versions, performance and revisions.

In a similar vein to my other thread about the 3DS TN/IPS screen differences, I have finally addressed something I've been looking for for a while.

If you're from the UK, or even Japan, these revised GBA-SP's are a bit hard to track down. Being a late run revision to the already popular GBA-SP, the AGS-101 had a much improved (backlit) screen and was available in America, the European continent and other parts of the world......but not the UK.

The key difference between the models is the the AGS-001 had a top, bottom and side lit screen. Which was a wonderful addition to the GBA as the original model was almost impossible to view in anything other than perfect light.

The AGS-101 had a per-pixel backlit screen, which gave a much much clearer appearance and was a huge, improvement over the 001. Even with the backlight off, it's still lit up wonderfully.

I've been aware of these models for a while and have been actively looking for one for about two years now.

The actual screen technology isn't that expensive really and many people, modify, or even build their own with parts available very cheaply from China and Japan.

I've always sort of wanted a Nintendo built one though.

The work-around I've been using is a good one and cheap too - a DS Lite.

The only thing stopping the DS Lite being the perfect GameBoy unit for all occasions, is that it won't play any cartridge other than GBA. Original GameBoy and GameBoy Color are a no go.

So ultimately, the best option is the GameBoy Advance and it's versions, for your entire library of GameBoy carts.

**Now, I'm fully aware that a lot of the bigger GameBoy, GBC and GBA games are available on the 3DS VC, when my batteries run out in my carts I often resort to the 3DS's VC to play games - but I always try and play on original hardware where I can, I just prefer it. Besides, I've got well over 100 GameBoy carts so I still what a sweet way to play all those.

I've liaised with many a shop, many a foreign friend (including users on here from Japan, Germany & Holland) in the hope that they can track me down an original version.

They often come up on eBay, either for more than I'm happy to pay (£200+) or are missing the base stickers (a key indicator that that is probably a 001 with a cheap screen put into it) or have clearly seen a bit of a hard life.

Anyway, I've now got one. 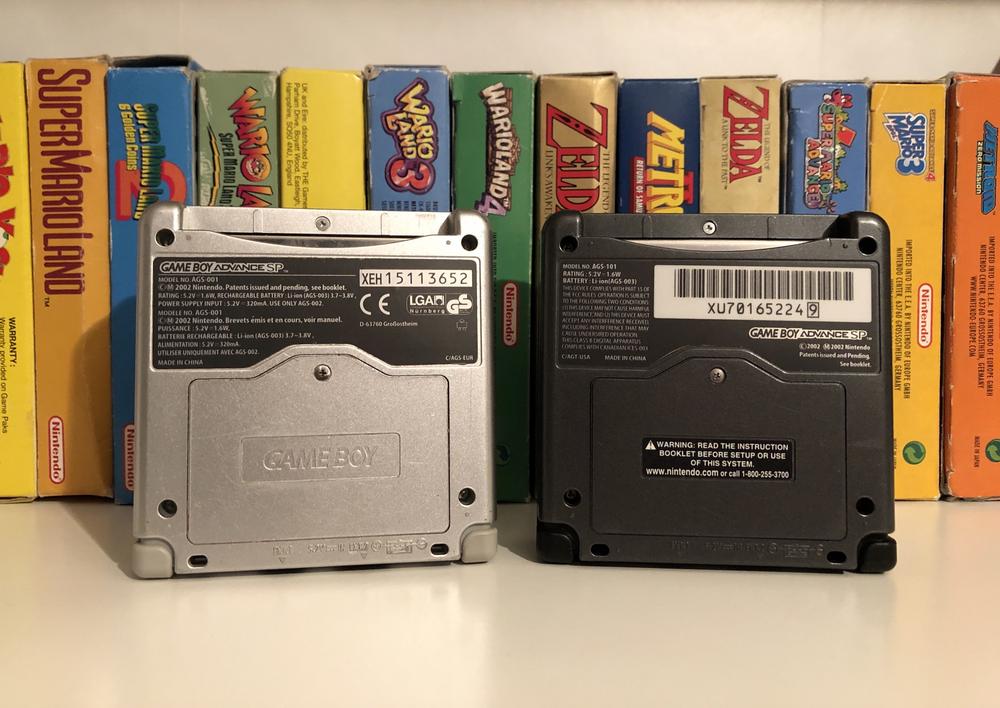 It's a little hard to see in the image above but of you look at the base stickers in the top left hadn't corner you should just about be able to see the model numbers.

Sadly, it's not boxed, has a few light scratch's (nothing I'm worried about - it's in better nick than any of my others !) and appears to have had the battery cover removed.

But the boards are genuine and the screen is unmarked, misted, or dusty in any way - I'm happy.

The difference is immediately noticeable, even on boot up.

To be honest, having the back light on, is a little overkill and can look a little blown out in the dark and I'm sure is there for when you're outside.

Here's some comparison pictures between my 001 and my 101, with a few GBA games - the difference, even in the pictures is massive but they still don't do it justice, it's just so clear, fast and vivid. 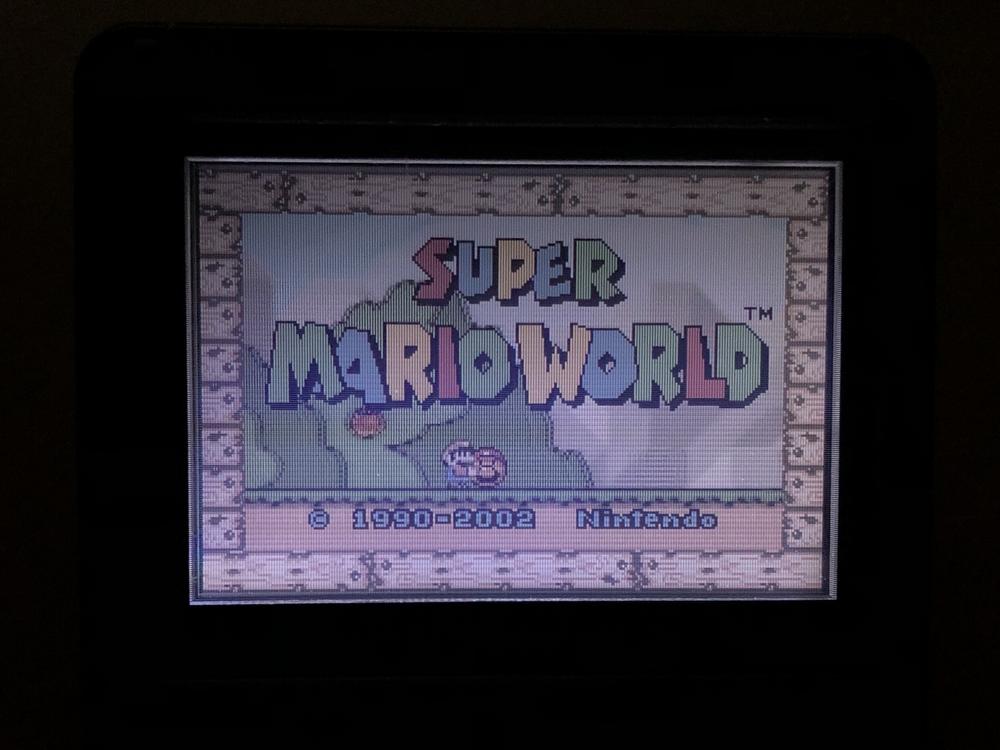 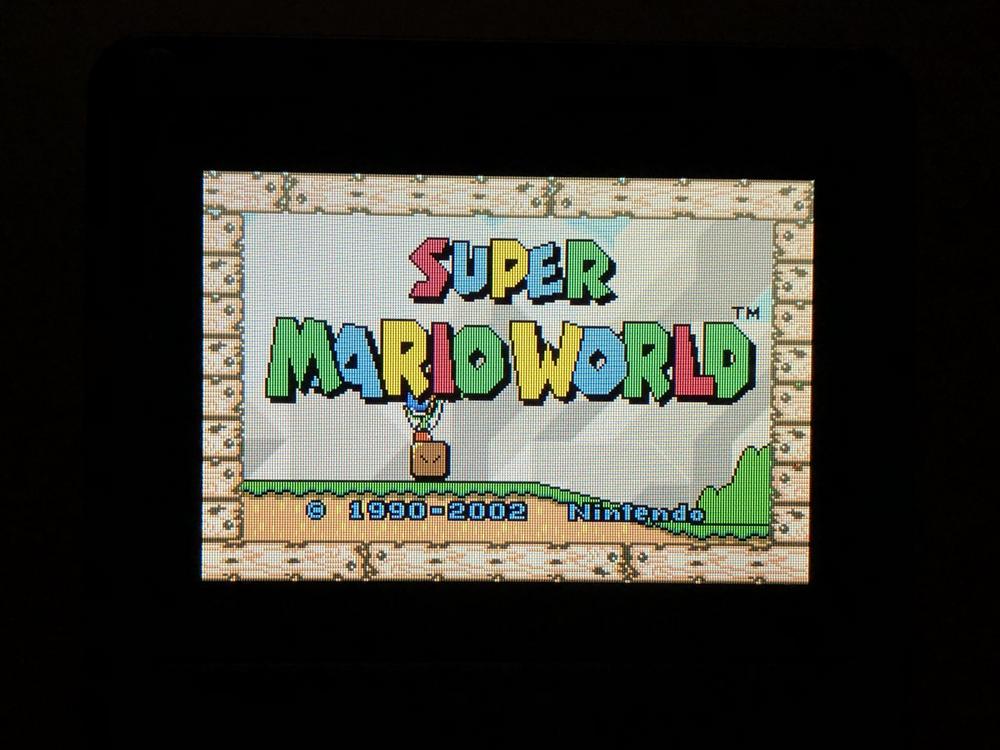 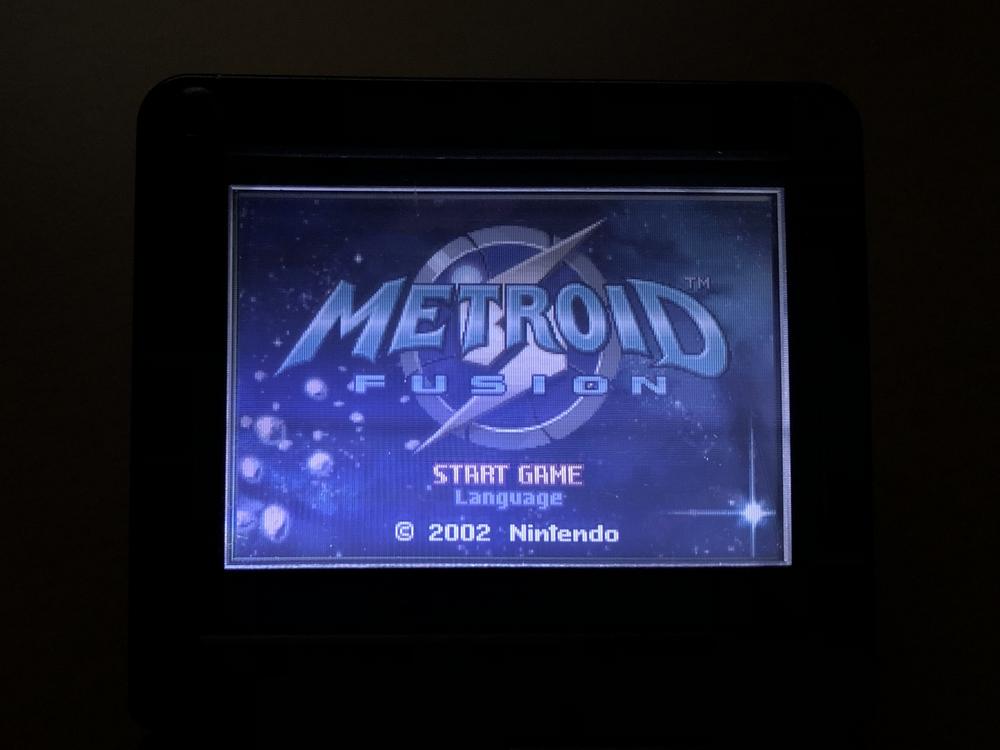 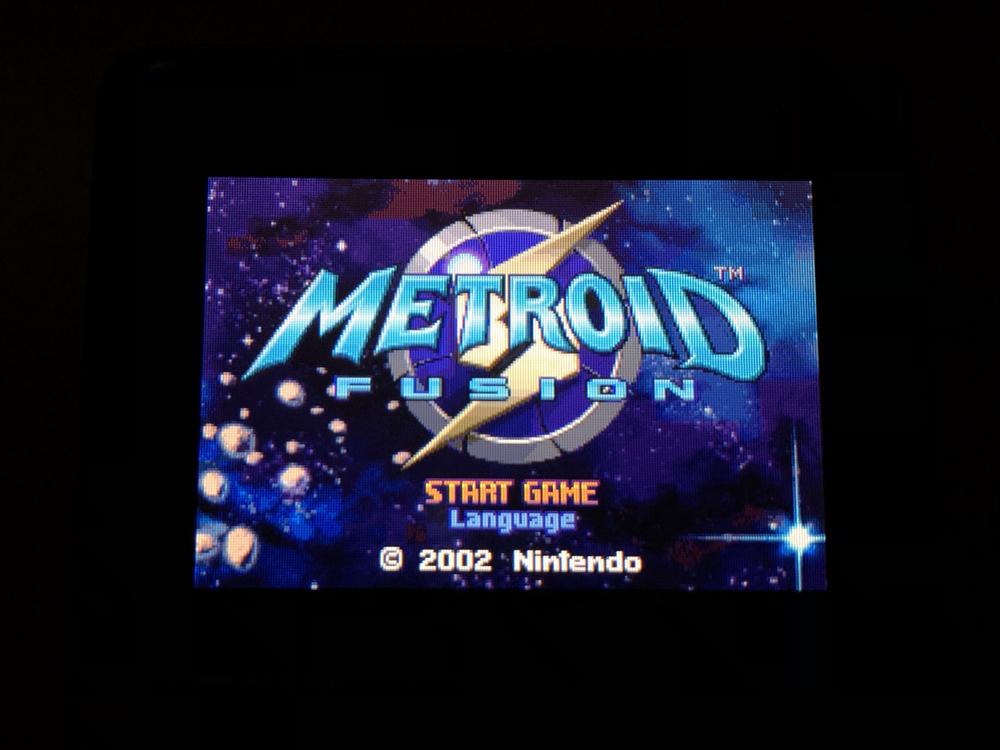 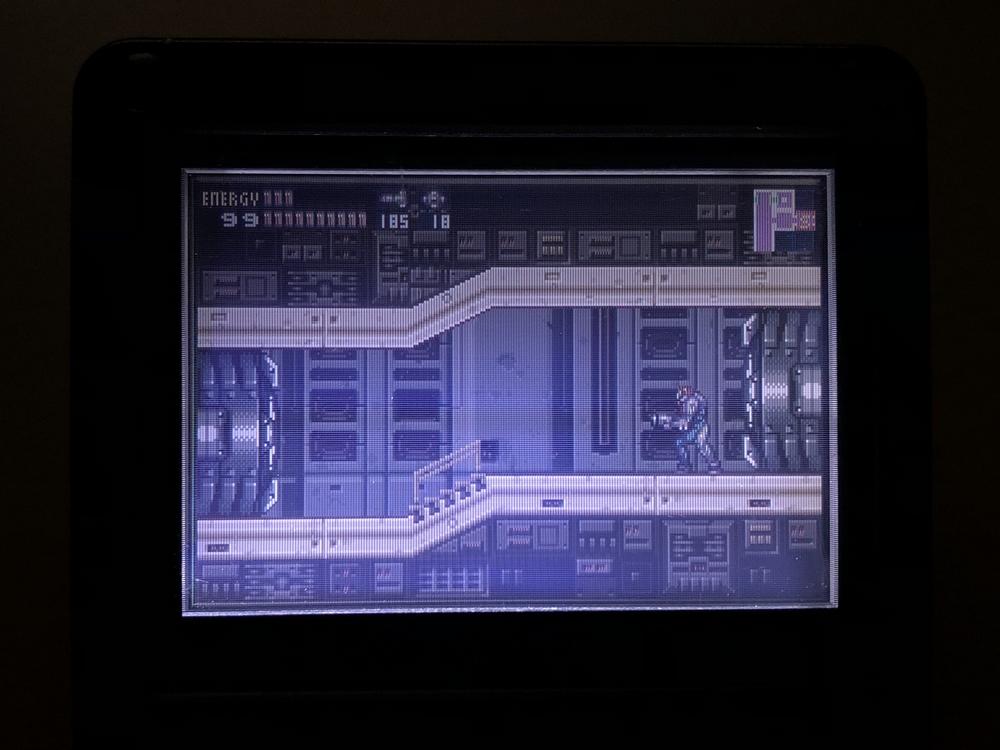 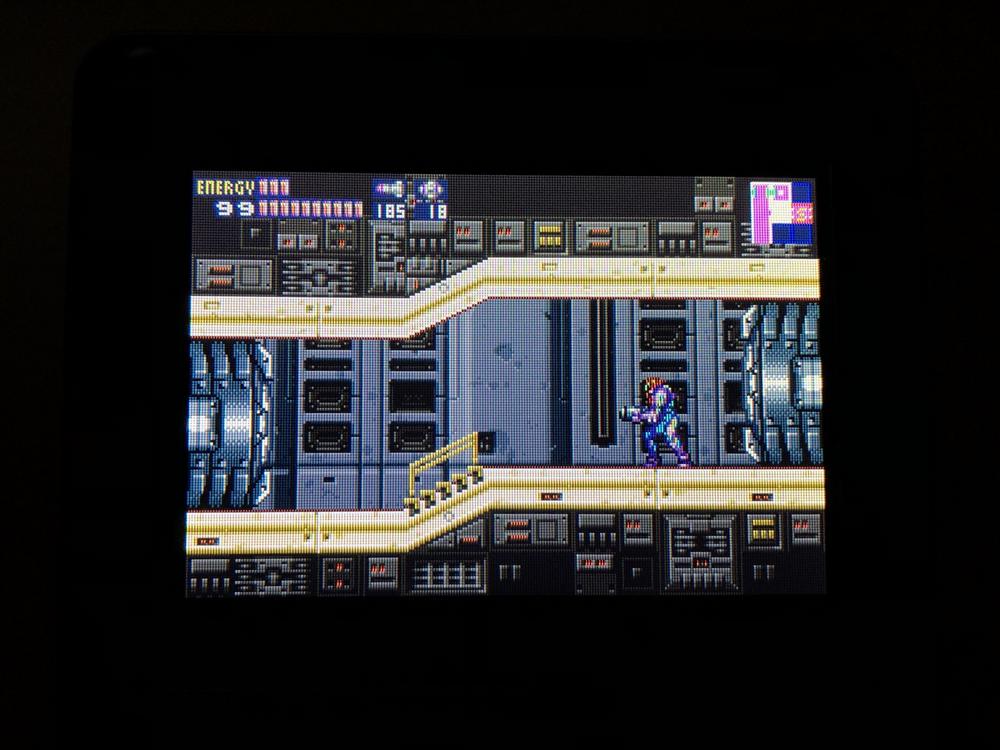 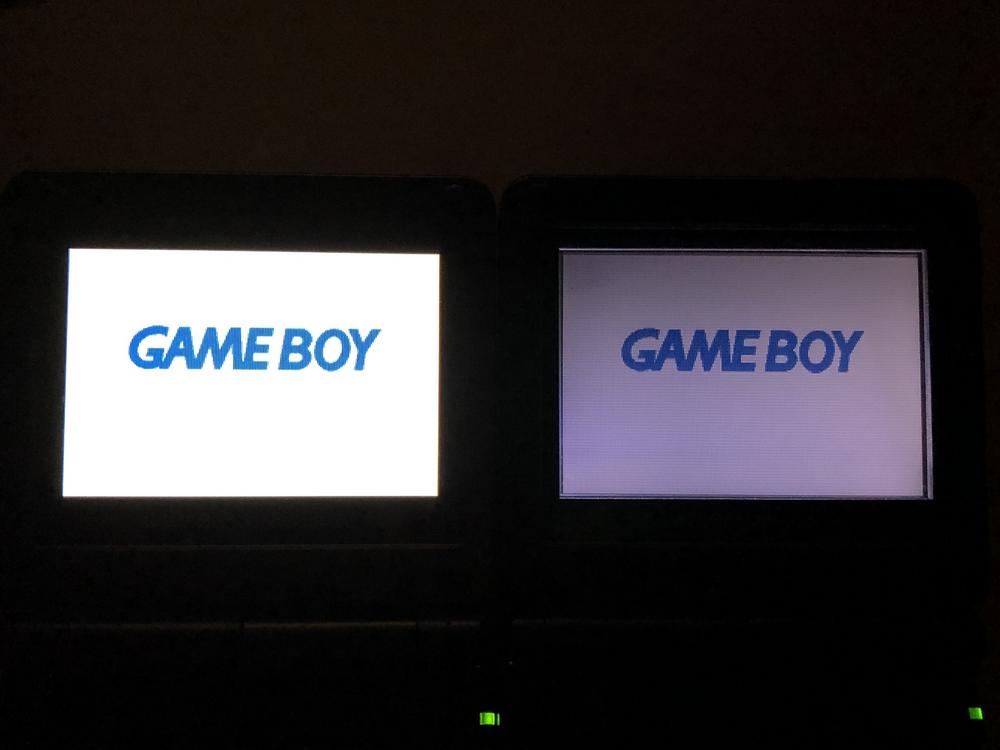 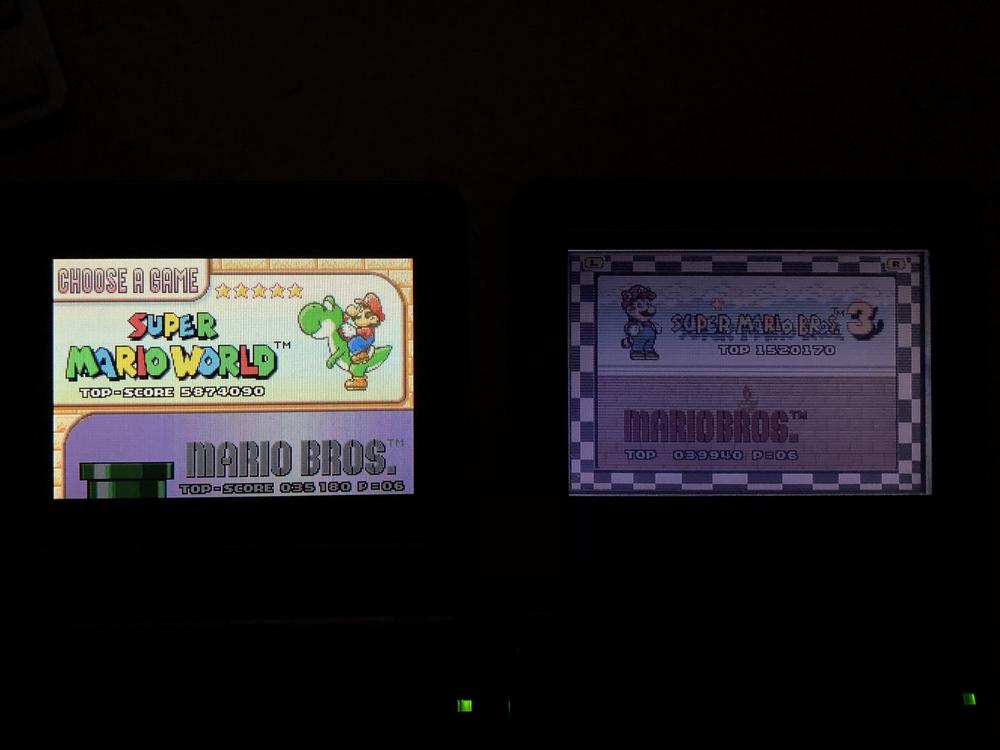 The AGS 101 is dope. It's difficult to convey the difference in display quality without actually holding both models side-by-side. Its only "fault" is the lack of a native headphone jack, really. But it's a fantastic piece of hardware and the best way to play GBA games - together with the DS Lite.

There is something magical about using a new platform or display for the first few times, too. Happy playing!
Top

Fantastic, so glad you managed to find one.
Top

I loves me some GBA games, but it wasn't until I played them on the Retron 5 that I really appreciated some of them. Like. Mega Man Zero is a great example of a game with a super, super rich OST that you'd never hear out of standard GBA speakers. That game has some CHONKY fuckin' bass that you can only get out of a sound system with a sub. The enemy explosion sound effect - sounds like tin cans rattling with a pop sound on the GBA, but with a subwoofer, you get this really low "BOOM" layered in there. It's really something else.

Now, if only someone could devise a method of playing DS and 3DS games on a proper TV, maybe through modding the WiiU or something... That would absolutely tickle my bacon.
Top

I (foolishly it appears) assumed you were male.

On the speaker side of things, I have some Bose Componant 2.0 speakers either side of my PVM - which have severed me well for many years now. They are extremely punchy and have a deep bass with rich mid. This is my desktop solution for GBA games via the GameCube GameBoy player.

Agreed some of the GBA have great sound, I don’t know what they were thinking with that excruciating penny sized single speaker in the GBA. Some of the solutions the modding community have produced regards sound improvement are impressive. You can really get some wonderful custom portable hardware for all types of GameBoy stuff nowadays.
Top

I (foolishly it appears) assumed you were male.

On the speaker side of things, I have some Bose Componant 2.0 speakers either side of my PVM - which have severed me well for many years now. They are extremely punchy and have a deep bass with rich mid. This is my desktop solution for GBA games via the GameCube GameBoy player.

Agreed some of the GBA have great sound, I don’t know what they were thinking with that excruciating penny sized single speaker in the GBA. Some of the solutions the modding community have produced regards sound improvement are impressive. You can really get some wonderful custom portable hardware for all types of GameBoy stuff nowadays.

I am male! Is bacon a euphemism for female genitalia in the UK...? Pretty awks if that's the case. I mean, I'm male, body dysphoria aside - I have a male, oxen-like body, and I'm fat to boot. My "inner voice" is more like a sparky teenaged girl. I wouldn't call that gender dysphoria, because I don't feel not-male. I just think I have the wrong body type to be as hyperactive and energetic as inner me.