Now this is just adorable.
Top

Reflashed the analogue up to v4.2 of the firmware when I got home last night (I remembered that my almost completely unused Mac Mini reads SD cards just fine so did it with that). The ‘built in’ game from DICE called Ultracore is also in that newer firmware, haven’t tackled that yet though.

Figured I may as well start out with the hardest test for it I own, the Megadrive version of Virtua Racing. It’s a big cart because it has extra hardware on it to do the 3d, and It handled it just fine. It’s not the best port of the game around, I just like it from a pure technical achievement point of view.

Then I played a lot of Sonic 2, because I know some of that is a good test for how solid the audio emulation is (especially casino night zone, there’s a bit of that tune that emulators usually muck up, not the case here)

It’s pretty awesome really, I’m very happy with it. About the only wrinkle is it doesn’t like going through my hdmi auto switcher, so I have to plug it direct to the tv.

Going to set aside some time this weekend to finally play Landstalker. I game I wanted but could never afford as a kid. I might see about testing the battery in the cart first though

I lent a copy of Scarface on the Wii to a friend this week.

I’d had it in the loft for about 6 years.

He opened it to play it yesterday and found £285 cash in old notes inside it.

Which was nice.
Top

Yep, no idea where it came from.

I think, it’s from a Wii bundle I picked up years ago and threw the swaps in the loft.

Budget for more games, yayyy!!! Fitting that it was Scarface too: "First you get the money..."
Top

Well, it was my mates 8 year old daughter that found it and gave it to her Mum - so I gave her £90 towards her savings, as she was saving for a Wii U, which she can now buy.

I've been using these for the last few days.... 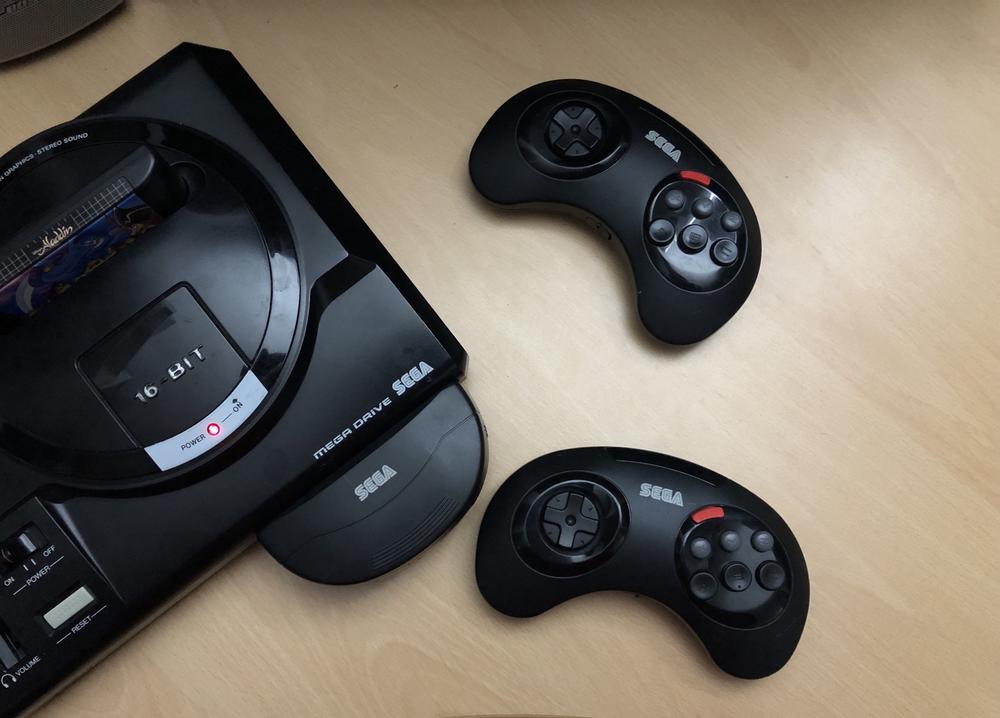 I've recently lost a few of my family of Mega Drive controllers leaving me with just a single 6-button controller.

With the recent release of the wonderful Analogue SG it seems that the slew of original Mega Drive controllers has been culled somewhat and the price of an original pad has escalated dramatically.

I have a friend that's never played the Streets of Rage games, so is keen to give them a go and is coming over on Monday to work our way through them.

I'd had a bit of trouble getting these to work previously but it seems a good fiddle with all of the controller sliders and a new set of batteries I know have them both working and they're not that bad.

The range is good, obviously if you cover the lens of the controller it won't work but other than clearly blocking the line of sight between the pad and the console adapter it works fine.

They may well be a factor of input lag but the platformer's I've tried it with and ultimately using it with the benchmark that is SoR2 it works just fine.

They feel real nice too and haven't had much use so the D-pad and buttons are nice and sweet.

^^^^Not bad at all! How was the Streets of Rage session?

So last Sunday I went to my first of the two yearly trips to retro gaming cons I allow myself, with some friends and my two kids. I had some birthday money left for this one and on the whole it seems that prices at these conventions are coming down... so this was really a big haul for me. 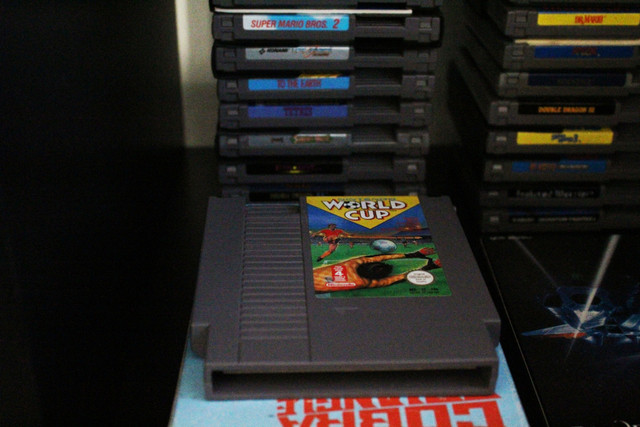 Nintendo World Cup is a mad, hyper violent soccer game made by Technos, originally set in the Kunio Kun or River City Ransom universe. The marketing and cover art for this Western version paints a very different picture, however, which elicited much lambastation and shunning from serious football (game) fans. It got trashed by Mean Machines and CVG, I believe.

It was always a real laugh with 4 players, back in the days. Think Mario Smash Football/Strikers or Speedball, rather than Pro Evo or FIFA. 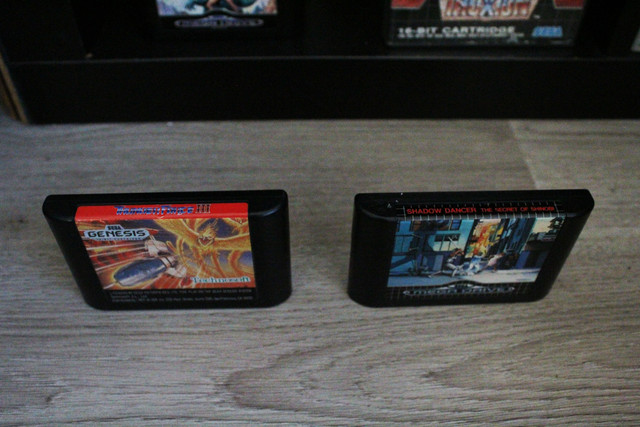 The PAL release of Thunder Force III is very misty indeed and at least there don't seem to be many legit European copies of this game around... but I found a very reasonably priced Genesis cart of it and it plays on my Mega Drive without a hitch.

Shadow Dancer I remember being very impressed by in kiosks, back in the days, and I very much like what I've played from it. It's far more of a direct successor to the original Shinobi than the (monumental) Revenge of Shinobi was, even though it's now considered as more of a spin-off. 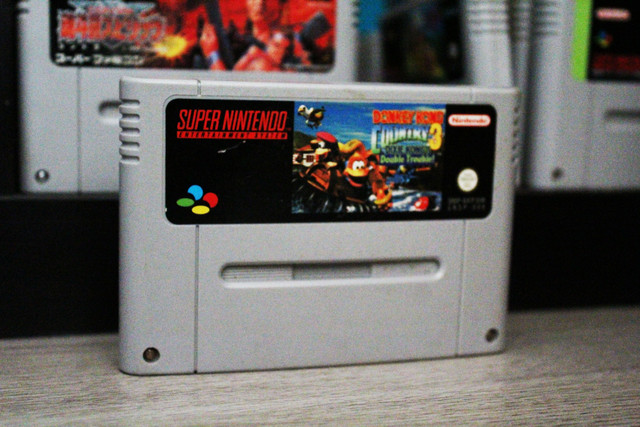 Still needed this one for the DKC trilogy podcast we're doing later in the year. Been enjoying chipping away at Donkey Kong Country 2, so playing through this one is a nice prospect. 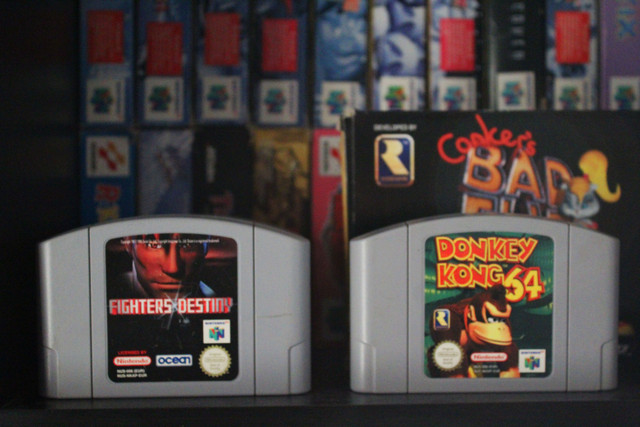 Genki's Fighters Destiny might just be the best fighting game on the N64, which isn't saying much. It is fairly unique though, eschewing winning by depleting your opponent's health bar in favour of a point system that rewards throw takedowns, knockdowns and ring-outs, making it a technical and timing based game.

DK64 I sold back in the days in disgust, but in reality there is good to be found in here (like the Donkey Kong arcade game!) and its omission did start to feel like a hole in my collection, even though I will never attempt to play it to completion. Was not going to shell out 30+ EUR for a boxed copy, however! 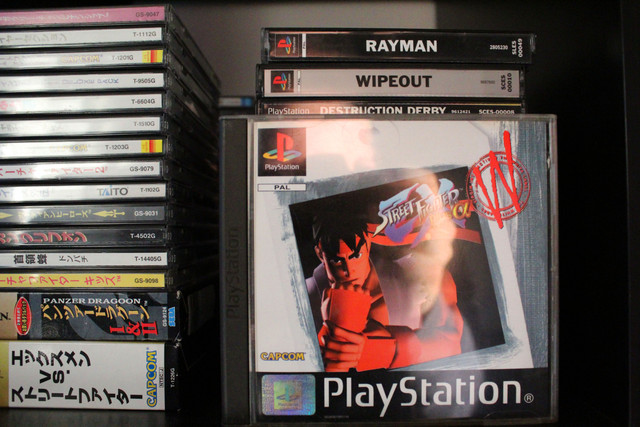 Always wanted Street Fighter EX Plus Alpha to add to the breadth of my Street Fighter collection and I found a mint copy that went for very little money. 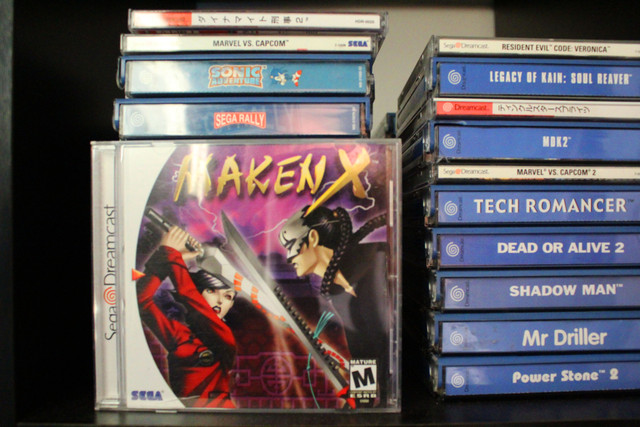 Now this was the suprise find of the trip (always the Dreamcast games, isn't it?). Maken X is an odd, but intriguing, first person sword slashing, brain jacking action adventure by Atlus, with character designs highly remeniscent of the Shin Megami Tensei series that I've seen go for 80 dollars/euros and up. Found this pristine copy for a tenner, so I guess this was one of those rare cases where the seller wasn't really aware of what he had. 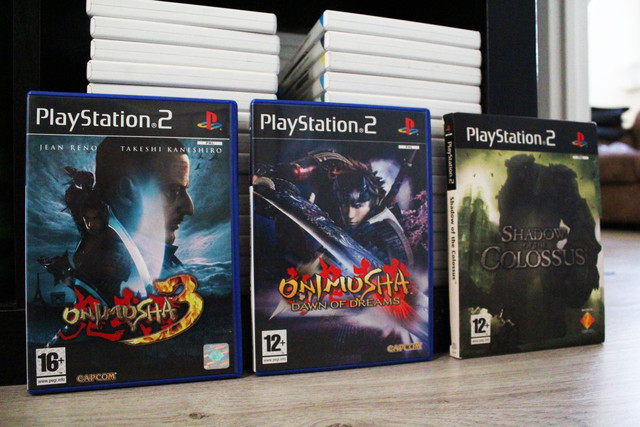 I now have the Onimusha series complete, so that's another series playthrough I have to plan in.

I also always wanted a copy of the fancy edition of the original Shadow of the Colossus for PS2. I'm not a real fan of your average HD remaster approach of up-rezzing a game with a relatively low polygon count and flat textures and while the remake looks fantastic, I think it loses the bloomy, dream-like Team Ico atmosphere, so I guess I'll have to contend with the crappy frame rate. 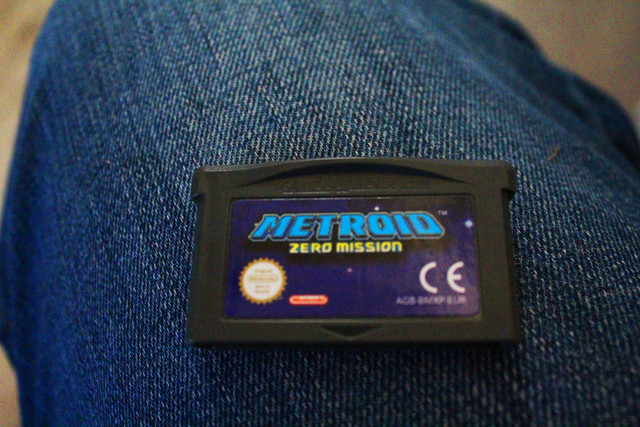 This wasn't a find on the convention, but it was sent to me by the honourable and most lovely KSubzeroo1000 only last week and I wanted to include it. Being a fan of the original Metroid, I always wanted to try this elaborate remake, but I found the going rates too prohibitive, so this was an incredibly welcome and heartwarming gift! 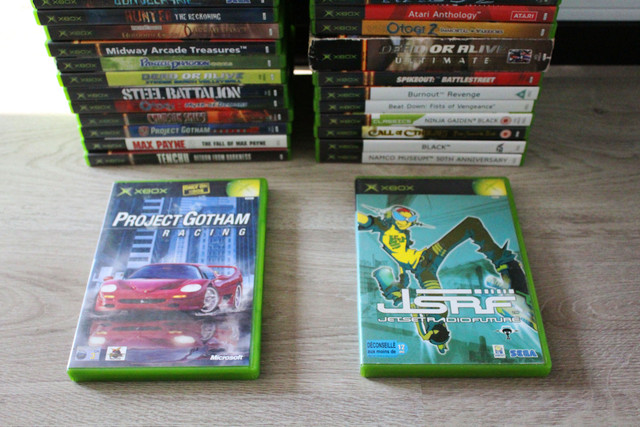 PGR, I got for a couple of cents at the convention, but again, I could not find a copy of Jet Set Radio Future (been on the lookout for it for 4 years), this time. But I walked into a retro gaming store in the center of Amsterdam yesterday with the explicit purpose of checking if MAYBE this time they had one... and they did! 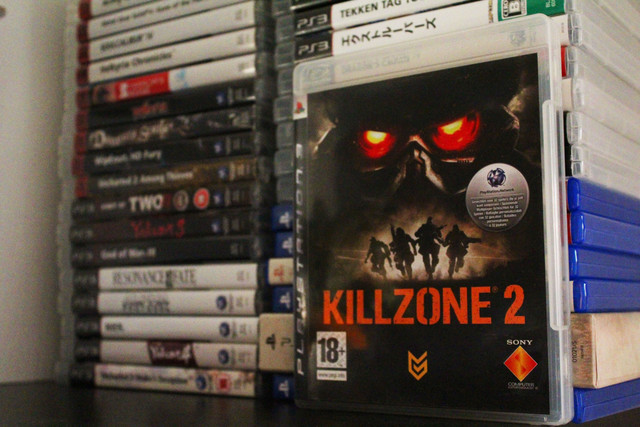 Blame this purchase on DF Retro's John Linneman, who recently did a full episode on it, causing me to look into a series of games I never had any interest in.

And that's really it!
Top

Have you tested your copy of project gotham? I have 4 copies of the game which crash at the title screen or various early menu screens quite frequently. Happens more on 360 but also on original hardware too. It’s the same with the sequel. A firmware problem maybe or perhaps just my aging hardware/disc drive.
Top

^^^^ Yeah, I was just playing it on the o.g. Xbox. Cleared the first set of stages, so all seems well. Played quite a bit of part 2, a while back.
Top

From what I can tell from my Japanese copy, the Megadrive version of Shadow dancer is very much it’s own thing and not really a port of the arcade game at all.
Top

The levels are different, the dog interactions are different, you diffuse bombs instead of save people in the arcade version, but both very much follow on from the original Shinobi in terms of their design and core mechanics, with enemy formations guarding something you need to rescue (or diffuse) and a lot of jumping between levels and background/foreground.
Top

World Cup on the NES I've never played although I do remember the World Cup on the GameBoy which was great fun and effectively the same game. Very enjoyable doing super shot overhead kicks

You can get some good deals on cart only, over here at least so it's a great opportunity to grab them at conventions and are usually overlooked I find for the CIB versions.

Good old Camille sorting you out a Metroid cart, I recently played through Fusion over Christmas and started Zero Mission but didn't want o overdo it on the classic Metroid so have left it be for a while - maybe next Christmas perhaps...

Good find with the Dreamcast game, again I find a lot of imports at conventions over here in the UK and often people don't bother with them, if you have the means to play them its a goldmine of curios.

Ha, yes, very good thanks. We played through SoR1 on Monday and managed to get all the way to the Blaze twins second battle, outside of Mr X's office before we lost all of our original lives and had to use a continue.

My mate was impressed by the offer of Mr X to join him and was tempted to see what happened if you accepted but I promptly told him and we played on.

SoR2 next. He has no idea what he's in for.
Top

No biggie, only cost 3,50€ including shipping from a seller with a brand new account and a 7,5% approval rating. Not my problem if the paint peels off and his NDS gets Y2K'd.

No biggie, only cost 3,50€ including shipping from a seller with a brand new account and a 7,5% approval rating. Not my problem if the paint peels off and his NDS gets Y2K'd.

Hahahahaha, I like the cut of your jib !!
Top

World Cup on the NES I've never played although I do remember the World Cup on the GameBoy which was great fun and effectively the same game. Very enjoyable doing super shot overhead kicks

You can get some good deals on cart only, over here at least so it's a great opportunity to grab them at conventions and are usually overlooked I find for the CIB versions.

Yeah, I collect to play, so if I can get a loose cartridge for much less, I usually take it. When I buy boxed cartridges, it's typically because that was the only option.
Top

It seems like this has been “coming” for a long time but hasn’t materialised yet. They’ve now got a kickstarter with a vague launch window. Thought I’d spread the word and this seemed like the best thread to do that.
Top