This is where you can deliberate anything relating to videogames - past, present and future.
Post Reply
791 posts

But you probably know that already, hehe.

I’ve not actually played it yet mate, although I’m aware it’s pretty naff.

The music in it is... a thing. That exists.
Top

I’ve recached the end of my five year GameCube collection adventure – but I’ve come up short of the line.

It’s been loads of fun, a great adventure. I’ve met plenty of cool people and it’s been exciting finding games you need and learning about the systems library.

A number of factors has led to this.

This is a serious factor in any collection. A full set is roughly 450 games, if you’re going for full PAL-UK, this excludes reginal games that were only released in France, in French etc…. That’s effectively two IKEA Billy bookcases stacked top to bottom. I have rather a lot of other games on other systems too (over 1000) so shelf space is a premium and its pushing collection like Saturn and Dreamcast into areas of the office I don’t like.

This will give me much more space to organise things nicely and room for future pickups and expansion.

These suck, they are mostly now terrible third party games that were late release and sold badly. Because of this, they can reach upwards of £200 for something I don’t even want to look at.

Forking out serious money for games like Chibbi Robo, Mario Party 7 (Big Box), or Kirby’s Air Ride is easier, than for games like Disney Sport Basketball, Gadget Racers (£200) or the Powerpuff Girls.

Trim down my displayed collection to just the game I want, want to play or are interesting.

I’ve taken out all the first Nintendo titles, the big box games, games I love and then other cool curios on the system and kept them out on the shelves – about 100 in all.

I’ve also left a few of the big price games in there as they make good conversational pieces as to why they are expensive, Frogger etc..

Then the rest (300+ below) are the shovel wear, or other naff entries I have no real desire for outside of the full PAL set.

I will likely wrap these up, box them up and store them somewhere secure (the loft I’d expect)

I’m not ruling out picking up any further GameCube games in the future should I come across titles I need if they are deals but for now - I’m done. 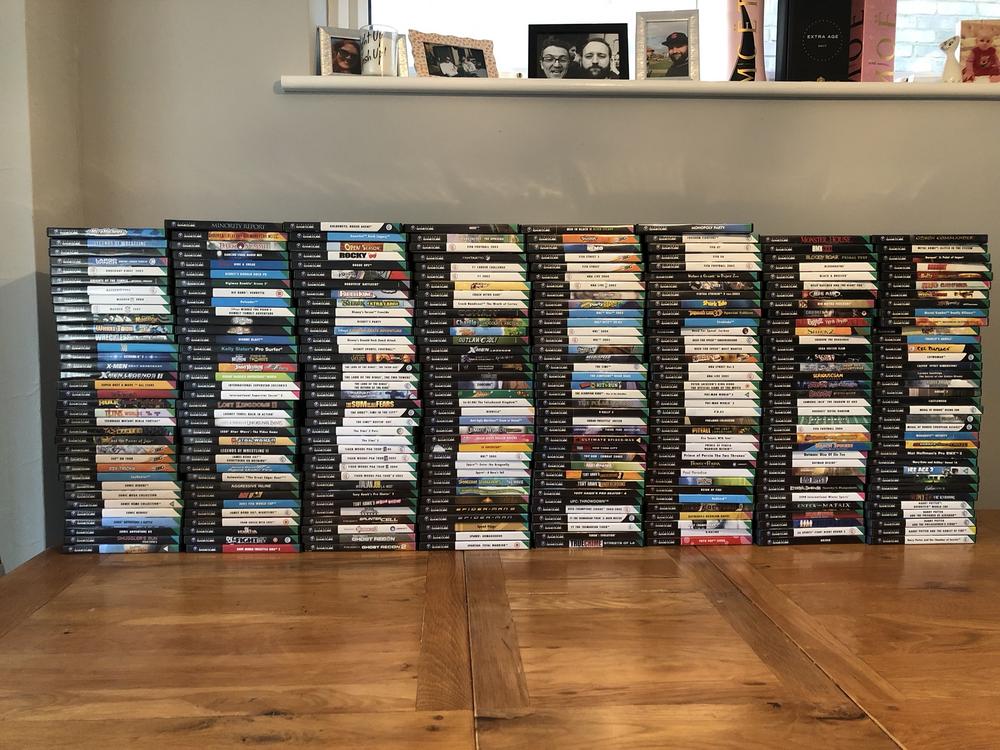 Honestly, I never quite understood the urge to buy every single game ever released on a platform regardless of quality. Even as an ardent defender and collector of physical media, I'd much rather have a tight, curated selection of great games than a catalogue of absolutely everything.

I'm not trying to be mean, I guess what I'm trying to say is that I totally understand why you might have reached your breaking point after all these years. The remaining shovelware probably isn't worth all the effort and monetary investment.

The urge came from going to boot sales, CD stores, markets and other outlets and seeing games for 50p.

This turned into a ritual where a few of us would get up early on a Sunday, grab a coffee, bacon roll and go game hunting.

After a few years, you would suddenly find you’ve amassed quite a collection, well over 50% - so the thought of, maybe I can get all these came up.

I suppose it turned into a bit of a sticker album.

However, over the coming years the desire to collect these became higher for a lot of people, thus less were about and prices soared.

In turn making it less of a cheap few penny pick ups, into a burden.
Top

One less thing to worry about, then! Doesn't sound half bad to me.

And who knows, ten years from now that pile of junk might even fetch a pretty penny if you ever decide to go down that route.
Top

Suits wrote: ↑
September 12th, 2019, 9:43 am
.. shelf space is a premium and its pushing collection like Saturn and Dreamcast into areas of the office I don’t like.

Suits wrote: ↑
September 12th, 2019, 9:43 am
It’s been loads of fun, a great adventure. I’ve met plenty of cool people and it’s been exciting finding games you need and learning about the systems library.

Great stuff, lots of people* have a one-dimensional view of collecting and don't realise that it's more than just pawing the merchandise in one's man cave (though there's an element of that too

I'm using 'lots of people' in the Trumpian sense here, ie Me.

I'm kind of with Ksub in that I'd never go for a full library of a system myself (shovelware and all), but I also get the appeal as you explain it, Suits. Especially the whole social experience around it. So I'm sad you couldn't complete your sticker album before it became unfeasible.

That picture of all the GC games is damn impressive, though!
Top

I suppose it turned into a bit of a sticker album.

I get this bug too! I still have ebay searches set up for books/games etc to complete a set even if I have no interest in the series any more.

I need to stop doing that!

I never actually set out to collect the whole set, in fact, it started just as things normally do - picking up the games I wanted.

At the time (must have been five years ago now) I was actively looking for SNES games but found myself pawing over loads of loads of GameCube games, which were all £1, £1.50 etc...

So I started picking them up.

Then it turned into, huh, I’ve not got that one, might as well grab it.

Before you know it you’re well on your way

. It’s a relatively small set too, 450, compared to the Xbox which is almost double that and the colossal PS2 with way over 1000.

But like most fun things, the scene changes and it suddenly seemed to become really popular and people were picking up stuff just to re-sell, prices went up and the fun turned into a weird sort of panic, just to get done ASAP before things got silly.

Mind, it was proper fun

So, I’ve had a few offers of £1500 for the bundle of shovel-wear. To be honest I don’t really want to sell it all but it’ll just got up in the loft, so I am kinda tempted.
Top

I don't suppose you'd have any duplicate of non-shovelware titles in that pile? There are still two or three GameCube games I'm looking for and that second hand market isn't messing around!
Top

I don’t I’m afraid Bro no, I tend to move in circles where doubles get snapped up pretty quick by eager collectors.

What you after man ??
Top

KSubzero1000 wrote: ↑
September 12th, 2019, 6:53 pm
I don't suppose you'd have any duplicate of non-shovelware titles in that pile? There are still two or three GameCube games I'm looking for and that second hand market isn't messing around!

What you looking for?
Top

Ah it's all right, mate. Inspector Suits is already on the case. Last thing we need is some friendly cross-fire!

No worries, wasn't looking to sell anything, just wondered if there were particular titles you were still hoping to add to your collection.
Top

KSubzero1000 wrote: ↑
September 12th, 2019, 6:53 pm
I don't suppose you'd have any duplicate of non-shovelware titles in that pile? There are still two or three GameCube games I'm looking for and that second hand market isn't messing around!

I’ve got a spare copy of a game called Resident Evil 4. Have you heard of it?
Top

Have... Have I lived long enough to become a parody of myself?


Spoiler: show
Damn, you guys are being ruthless lately. Guess I deserve it!

Spoiler: show
Yeah, I have all three GameCube versions of RE4. Now leave me alone!


Spoiler: show
Damn, you guys are being ruthless lately. Guess I deserve it!

Spoiler: show
Yeah, I have all three GameCube versions of RE4. Now leave me alone!

Haha I couldn’t resist. Although I must admit my first thought was you were after either Twin Snakes or a back up Resi 4

Simonsloth wrote: ↑
September 12th, 2019, 9:09 pm
Although I must admit my first thought was you were after either Twin Snakes or a back up Resi 4