This is where you can deliberate anything relating to videogames - past, present and future.
Post Reply
941 posts

The Dark Alliance games are great fun. I keep meaning to dig those out of the depths of my storage boxes and play them again.
Top

Can't comment about the others, but Baten Kaitos & Viewtiful Joe are

Viewtiful Joe is one of the best 2D action games ever made, I'm amazed they abandoned the series. Its ripe for a third game or at the very least current gen re-releases, I say.

Did you ever play the DS version, ksub? It was also great.
Top

I have not! I'm not particularly fond of playing fast-paced action games on a handheld in general, anyway. Games like these require a big screen and a proper controller for me.

And also, despite me praising VJ, I should probably point out that I haven't even finished the first game, let alone the second! I love them but I just hit one too many difficulty spikes and gave up when I was playing it along with the show a few years ago.

But it's an excellent grab for any collection, that's for sure.
Top

Same here, played the first one for hours and hours but never got past a particular boss. I really ought to give it another crack!
Top

Just picked up my first pro crt monitor. It's a 20 inch 90's grade 1 broadcast reference monitor, seems like it's in great condition too.
Excited to hook it up to my old consoles and see what all the fuss is about.
I'll post some pics when I've got it up and running if anyone's interested and even if you're not I'll do it anyway! Got to show off my new toy somewhere.
Top

I have a Sony PVM-20M4E and use it for everything up to and including my Wii.

It’s stunning, nothing beats a CRT for most old consoles.

What will you be using and how are you hooking it up ??

What CRT is it anyway - I’ve not seen one like that before.
Top

It's a Cromatech CM151 monitor, little known brand that made professional broadcast equipment in the 80s/90s. It's roughly equivalent in specs to a high end Sony PVM or BVM from the same era.
I've a friend who works for the BBC that pulled it out if one of their editing suites for me.
I'll be using it mainly for 8/16/32 bit consoles but it's got a full suite of (BNC) RGB and component hook ups so it should happily take whatever I want to throw on it.
I do have a larger Trinitron consumer set which I may still prefer for 6th gen consoles but for anything 240p it'll become my screen of choice
Top

Ha, yeah, I got mine in 2014 from a dude at White City who worked at Sky/BBC and “acquired” few of these when they went all digital

It's all about who you know! This guy is also still in contact with people who used to service these things too so if I run into any problems I can't fix I've got a technician on hand.
Top

Just picked up my first pro crt monitor. It's a 20 inch 90's grade 1 broadcast reference monitor, seems like it's in great condition too.
Excited to hook it up to my old consoles and see what all the fuss is about.
I'll post some pics when I've got it up and running if anyone's interested and even if you're not I'll do it anyway! Got to show off my new toy somewhere.

So a while back I went on a bit of an eBay spree to pick up a bunch of Megadrive games I wanted to play. You know, the usual stuff, Street of Rage, Desert Strike, Road Rash, Sonic etc...

Now I’m not a collector, so most of what I picked up were loose carts, usually bundled along with 3 or 4 other games on the cheap. Most of those extras got dumped into a cardboard box that ‘I’ll get to at some point’.

Well I’ve decided to start working my way through it. I’m going to give each one I try at least half an hour of my time, the vast majority I’ve done no more than just check they boot up, so it should be a ‘fun’ time. I’ll post my impressions of them as I go.

I know some of what is in there are absolute stinkers, but there’s a lot there I’ve not ever really read much about.
Top

I love doing this, I find it so interesting.
Top

I’ll start off my own thread for it over in off topic. It’ll mostly be the same things I’m saying on twitter, but it’ll be fun to write it all down even if no one else ever reads any of it.
Top

Hit up a retro gaming covention all up in the north of the Netherlands, with only my 11 y.o. daughter as (pleasant) company and these games from 'the want list' is what I came back with. 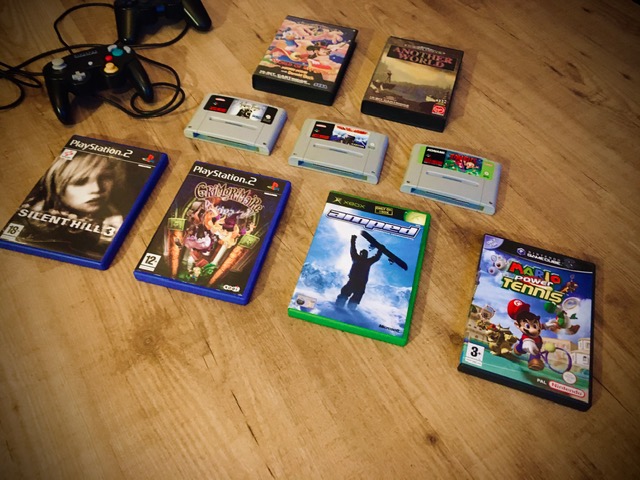 - World of Illusion (MD): That completes the SEGA developed Mickey & Donald games for Mega Drive in my collection.

- Another World (MD): Played the SNES version, back in the days, but as far as consoles are concerned, this game feels more at home on the Mega Drive.

- The Addams Family (SNES): Good memories of visuals and music with this game. These Ocean developed licensed platformers always seem to get a bit of a bad rep, but I rather enjoy them. Pugsley's Scavenger Hunt is the better game out of the two, but this one isn't bad either and has interesting non-linear design.

- U.N. Squadron (SNES): Was missing from my collection for far too long. Looking forward to spend more time with it.

- Zombies (SNES): A.K.A. Zombies Ate My Neighbors! The only thing stopping me from buying this one in the past was its steep price, but I got this one for a fraction of what it normally goes for.

- Silent Hill 3 (PS2): Another hole in my PS2 library of games filled. Looking forward to playing this whole series for real for real at some point.

- GrimGrimoire (PS2): Very hard to find Vanillaware developed RTS that I've been looking for for quite some time.

- Amped (Xbox): Got this for 2 euros and was always curious about these games, having enjoyed games like 1080 and SSX before. My boy is into snowboarding games as well.

- Mario Power Tennis (GC): Not the most common Gamecube game, interestingly enough. Well, not as common as many a Gamecube shovelware title you come across at these conventions. Usually goes for 40 and up and I got it for quite a bit less and in good condition.
Top

Nice haul! It's surprising what you can find at these things, you'd expect the sellers to be fully aware of an item's value but there are always bargains to be found.

GrimGrimoire is a nice find, loved that game. Incidentally I've just been looking at Vanillaware's new RTS game, 13 Sentinels which has just released in Japan and on it's way over here in 2020. Looks great but very different from their usual fare.
Top

Right! The Zombies thing especially surprised me, as there were booths left and right of that seller that had priced it for quite a bit more.

13 Sentinels, eh? That went under my radar up unitil now. Thanks for hipping me to that!
Top

Hardly incredible but I once got a complete Wonder Boy 3: Dragons Trap on the Master System for £3.50 at a games fair - then sent my loose cart off to MK !!

That’s probably my biggest margin find, they must have missed a zero off the end of the label.

My manz, I don't have a Game Boy. Was eying some Castlevania games for the GBA, but they were damn expensive.

I can send you/or put one together for you if you ever need one.

I have every GB Castlevania game - BOXED