This is where you can deliberate anything relating to videogames - past, present and future.
Post Reply
935 posts

Finally I managed to win a PAL, complete copy of the Dracula X Chronicles on the PSP for a fair price. Which means I can finally use that PSP I repaired a few months back.

Also picked up another Saturn controller, this time a Japanese one as it's lush.

Probably give that a deep clean and start using it as my daily Saturn controller.

This lockdown situation has had me all over eBay recently. 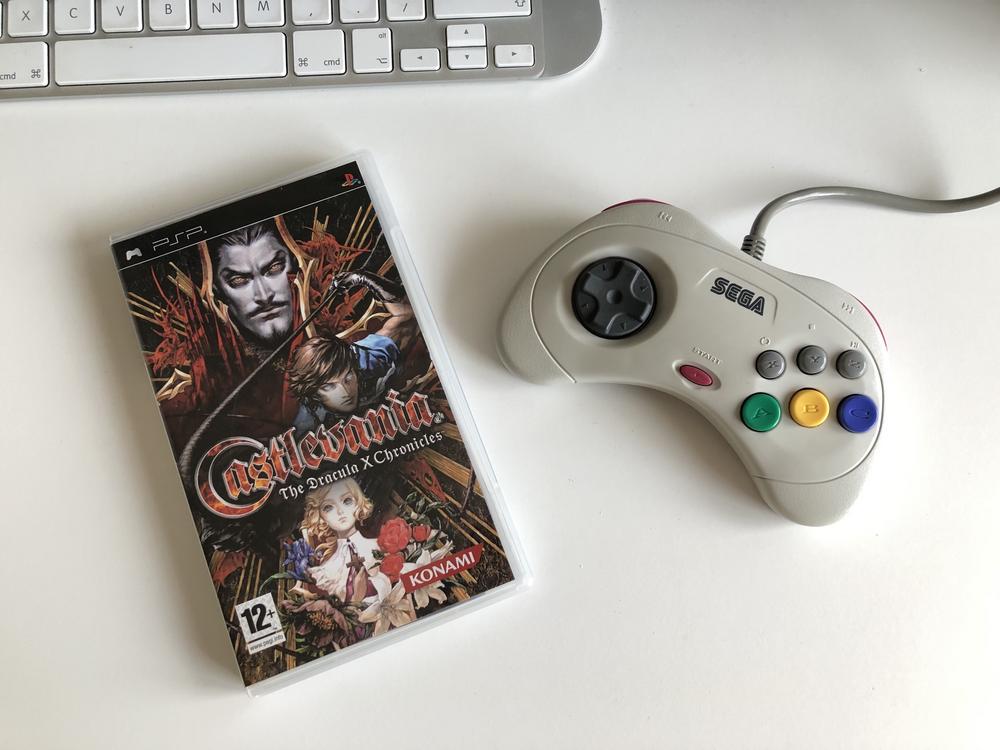 Nice pickups! Have you played Rondo before? If not, I'd definitely recommend playing one of the original releases first if you can (the Wii VC version is fantastic). It's surprisingly cinematic and really benefits from being played on a TV. What a great package that release is though for PSP and that controller is a beauty

BaileyBoy wrote: ↑
May 8th, 2020, 5:58 pm
Nice pickups! Have you played Rondo before? If not, I'd definitely recommend playing one of the original releases first if you can (the Wii VC version is fantastic). It's surprisingly cinematic and really benefits from being played on a TV. What a great package that release is though for PSP and that controller is a beauty

The original is on that PSP disc, it just requires playing a couple levels from the remake first.
Top

C&R crew, what was the first video game *ever* to feature instant-death spikes?
Top

The original is on that PSP disc, it just requires playing a couple levels from the remake first.

Oh I know, my point was more that it loses a little something on the small screen. Worth playing any way you can of course but it looks amazing on a CRT and I know Suits has that PVM sat there...
Top

Pitfall maybe? Donkey Kong was slightly earlier but no actual spikes, although a fall from height would kill you.
Top

I was playing one of the older Mega Man games, and it got me thinking, "Where do instant death spikes even come from?" I was curious if I could identify a through-line to their ubiquity.
Top

I don't know, Manic Miner had them I'm sure which was early 80s, but there must have been something before then I'm sure. Incidentally, did you ever play VVVVVV? If you're interested in instant death spikes (!?) it's pretty good!
Top

You’re probably going to need to go back to some very early arcade game to find the first spikes of death.

BaileyBoy wrote: ↑
May 8th, 2020, 5:58 pm
Nice pickups! Have you played Rondo before? If not, I'd definitely recommend playing one of the original releases first if you can (the Wii VC version is fantastic). It's surprisingly cinematic and really benefits from being played on a TV.

I've not mate no and I've been looking forward to it for a long time.

This purchase was based solely on the fact that it has the original RoB hidden in the 3D remake.

The problem I have put myself into is that I want a PC Engine CD. I've been procrastinating over this for years, as its a complicated purchase.

Then, once I have the console, I need to mod it for RGB, which isn't too much grief - it's just another step.

I'll be close to £400 on that. I'll enjoy other games on the system but it'll be collected primarily for RoB.


So, the Wii version(which I know is good). Sadly, I missed my chance on the eShop and now its gone.

I've tried emulation on the Home-brew Wii app and its pretty bad, honestly I was left wanting something much better. The geo was all messed up and the sound, well, the least said about that the better.

I'm sure there's a good way to get the emulation to a better standard but I'm a total n00b when it comes to emulation and just get frustrated by it.

Which left me, with the PSP version.

A few months back I was offered a very lovely boxed PSP in white, with a faulty mother board for very cheap.

So I thought if I could get it working, I would pick up C:TDXC

Even with the terrible scrolling of the PSP screen it still plays pretty well, or better than I could get it running via emulation anyway.

But yes, ideally, I'd like to be playing this on a PVM on a PCE but I just want to play the game now and this is close enough for me to enjoy.

Its took me a while to unlock the game mind, which is in a hidden area on level 4.

Great, glad you're enjoying it! I do have the VC version but I've put plenty of time into that collection on PSP. Playing it on a handheld comes with it's own charm

Suits, what version of the game were you trying to emulate on the Wii?
Top

I'm sure you already know this but it's part of the Castlevania Requiem double-pack on PS4 too, if all else fails.

Yeah, I do thanks mate.

Although my preference was to try and get something that ran at standard definition, so I could use it on CRT, etc....

Ah cool I'd got lost somewhere in the post and thought you were talking about a Wii version I never knew existed!
Top

So Michiel mentioned Shock Troopers the other day on Chris' Ikari Warriors stream and it reminded me that I have the Wii VC release but never actually played it.

Decided to remedy that today and what a fun game! Great sprite art, cool soundtrack and very tightly polished top down run and gun goodness. The VC version is excellent too and like all Neo Geo releases, utilises the Wii's 240p output so looks awesome on a CRT.

It's undeniably derivative, even for 1997, and doesn't really do any one thing spectacularly well but it's very solid and highly playable. A little easy perhaps on it's default difficulty (I cleared it on my first attempt) but I'm definitely going to attempt a harder setting and see if Mrs Bailey fancies giving co-op a go. There are multiple routes through the game and 8 playable characters so plenty to keep me going.

I've heard the sequel is a little divisive but I'm looking forward to checking that out too nonetheless.
Top

PSA: This video is legit.

I love talking about video game controllers (arguably more than about the consoles themselves!), and the lovely folks over at MLiG have put all those from the 5th and 6th gen under the microscope. Meticulously researched and very well presented. An hour well spent. Convinced me to grab a Saturn 2.4Ghz Wireless Arcade Pad from Retro-Bit, if nothing else!