This is where you can deliberate anything relating to videogames - past, present and future.
Post Reply
1724 posts

I've been working about 80 hours a week, and covering for two colleagues with prolonged absence and health issues so I decided to sack off various forums, Reddit, etc to spend more quality time at home and elsewhere when I get it. It's been pretty good and highlighted how little I get from the places I continued to visit out of habit more than enjoyment. I've now decided to cull pretty much everything and go as offline as possible. If only all the Internet was as fun as the best bits of this forum, but it isn't.

Anyway, just saying hello, it's so far from being about any individual besides myself and a better understanding of the feedback loop. I'm just pretty much done with social media of any kind because 98% is an incredibly compelling complete waste of time.

Very much enjoying ESP Ra.De, by the way, much more interesting and deep than I thought from some emulated runs. All the best for Christmas and New Year.
Top

Stanshall wrote: ↑
December 19th, 2019, 8:49 am
I've now decided to cull pretty much everything and go as offline as possible.

Well from the sound of it, it does include this place. Can't say I'm not disappointed to hear that, but you gotta do what's best for you. Social media feedback loop can be quite destructive indeed and it's sometimes necessary to set priorities.

It's gonna be weird playing ESP Ra.De. without you, though...

All the best, my friend.
Top

This doesn’t leave many of us left. Ah well.

Best regards Stanshall. Truth be told this shit is a waste of time if you aren’t getting what you need out of using it. Thankfully I still am with these crazy bastards unknowingly supporting me through mental times.

I only use this and twitter now, and I don’t really post on Twitter. Facebook got deleted. Reddit is WAY too addictive. Rllmuk is too big for me. I don’t mind there being not many here now, the low numbers make it manageable and interactive. If a couple more of you chuck it we could be having a different conversation mind.

It’s a shame our old friend hasn’t fully caught up on posts and learned I called my second born stanshall, and he’s already got a 1cc on futari.

Lads, we stand together like the violinists on the titanic. No tears.

Stanshall wrote: ↑
December 19th, 2019, 8:49 am
I've now decided to cull pretty much everything and go as offline as possible.

Well from the sound of it, it does include this place. Can't say I'm not disappointed to hear that, but you gotta do what's best for you. Social media feedback loop can be quite destructive indeed and it's sometimes necessary to set priorities.

It's gonna be weird playing ESP Ra.De. without you, though...

All the best, my friend.

It's hard to say I'm leaving without sounding rude, or without it seeming personal but it's entirely from seeing the patterns of my own habits and how much time I spend scrolling versus how much free time I've had for the last few months.

To be completely frank, this is the best forum and if I could just use one, it would be this one. And @Haze, congratulations! As it is, I flick through about eight different tabs and rinse and repeat, all day, work rest and play. In the office, on holiday, on the toilet, in traffic, on the train, on the sofa, in bed. I am an extremely online mother fucker, steady dripfeed of homeopathic content. Like, the ratio of great threads and discussion to what I read is about 1:1000000000 and it takes hours out of my life. I got one of those productivity apps and set the limit for Chrome to one hour. Lasted til about 8am. I've previously reduced it to just this place and one other but it's like saying you'll only smoke three ciggies a day. I do still think I might be able to handle just Twitter because I've pruned my feed like Miyagi-san but not for the moment.

The place I've been going longest, I like some of the people there but it's far more habit than enjoyment and I end up bickering out of boredom and over-familiarity. Even the bickering is habit rather than caring about whatever topic it is. Another few forums, more gaming and music and sport and politics and films, just a constant stream of press releases and hot takes and shit I'm not really interested in but which mildly stimulates the synapses. Xbox news. Reaction videos. Tetris Effect discussion. Transfer window contradictory gossip. Lol Trump hehe. Pokemon Sword and Shield. Fucking Star Wars. No Man's Sky update. Infighting in the Labour party. First looks. Samurai Shodown. LG OLED 2019 revision. My brain is so saturated with this stuff and it's completely devoid of substance. Rice crackers for the soul. I'd say this compulsive consumption is another reason for spending literally thousands of pounds on the Switch eShop. That's another reason I want out of the loop. I'll be taking her abroad next summer instead of playing the opening two hours of a grand's worth of games.

My wife and I decided no phones in the evening because we both got into the habit and although we tend to falter when we're tired, lazy, busy, whatever we've had a really good month where even when we're both knackered, we spend some time concentrating on the same thing, even if it's just Masterchef or whatever, cook, walk to the supermarket, mundane stuff but I go to bed feeling I've enjoyed my evening rather than burning it away. That goes for playing games, too. I think one reason I love shmups and fighting games is that they demand your full attention, unlike so much else which I pause to look at my phone or just turn off. I've enjoyed games more this past month for the restricted time, perhaps, but also for the time just playing games rather than multi-tasking. Battered my Futari God Mode score last night with a more carefree approach. I even died near the start and just carried on rather than resetting and treating it like a damn job.

I'm also an incorrigibly verbose and waffly so-and-so who doesn't know when to stop so I'll let my conscience tell me that I've got to hit the road. I hope you can see that it really really is no slight on this forum or anyone on here, and not really on anyone elsewhere either, rather than the habits I've seen through.

I will genuinely miss this place and all who sail upon her. All the very best.
Top

Yo Stan, take the best of care, man. Hope to still be in touch every now and then.
Top

This thread could easily be it’s own entire forum.
Top

It's a subculture within a subculture. I mean, Stanshall came to announce his departure in a thread about SHMUPS.

Love ya, Stan. Be safe.
Top 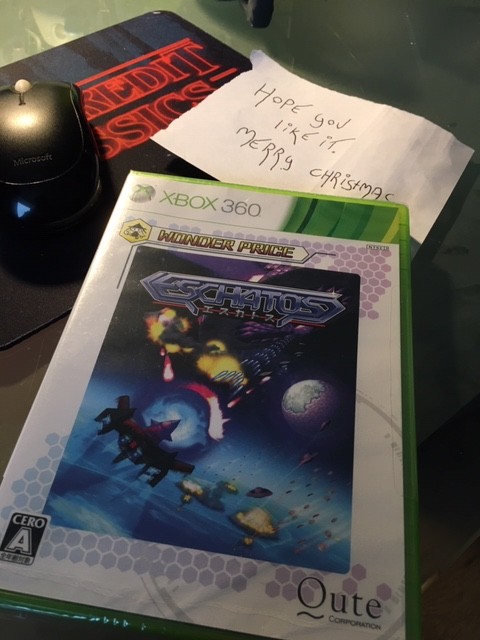 And a merry Christmas to you, Clipz! Really appreciate it.

WHAT? You never even peeled the cellophane off? Just went straight to Steam for this game?
Top

Heard nothing but good things about this game, looking forward to giving it a spin!
Top

Spoiler: show
Does anyone know a way to unflounce with any dignity intact?

Having mashed my passwords for every other forum and reddit and felt a tremendous relief, I realised this morning that this was the only place I would actually miss and it seemed like some clownish asceticism to throw the baby out with the bathwater. I also saw the Patreon had changed and wanted to come and say great idea! Also my wife is already sick of my newfound enthusiasm for DIY and decorating and shit and she has basically told me to get back onto forums or it's over.

I'm sorry to have been a big baby's trousers.

I would edit my colossal whining posts to conceal my shame but best to leave them there as a lesson. I do spend way too much time refreshing forums to be honest and I'm glad to have lightened the load enormously, but you know, everything in moderation.

Lol, no. I just said I didn't like the looks of Eschatos, before. Always heard great things about how it played!
Top

Actually, that was meant to preemptively call Stan out on his little revolving door stunt!

We love you anyway.

I've blown it. It'll never be the same now.
Top

You’re back? Bloody hell! Welcome! Thrilled to hear it. I feel like I’ve just watched the first and final episode of breaking bad, skipping the 5 seasons between.

So, stan my boy, you know you’re going to have to sit down and reassure clips you won’t leave him again, right? He shed tears. It could take some time but he may trust you again someday

Can we celebrate with a score battle? A game we all have?
Top

Oh, I'll be getting stick for this for years and years, even moreso than when I wasn't even here!

Also, I wanted to say a proper congratulations to you and the missus. You need to be power napping never mind shmupping!

That said, I would defo be up for some ESP Ra.De. if anyone else fancies a bit of that? It's perfectly emulated already so nobody needs to buy the new port, really, but I know a few have already mentioned having it on order. I got it off the Japanese eShop, got some credit from g2a.com, worked out around 32 quid, I think.

I've hardly played it before, wasn't totally convinced by it to be honest, but this release has made me give it a proper go and it's got a really cool rhythm and scoring system. You use a rechargeable shot to kind of stick bullets to large enemies and then destroy them with your normal shot and you get more points the more bullets were attached to the ship. It's a lot easier to feel it than explain it!
Top

I'm totally in on ESP Ra.De. I just need to wait for my copy to arrive, really.

I don't mind if you guys just start without me, though. I know clipz has been foaming at the mouth at the thought of playing it for a week now. All three of you, go for it!
Top

I'm happy to pause until we're all at the same starting line, to be honest. I like the idea of figuring stuff out together and sharing our discoveries.
Top

ESP ra.de it is! I agree we wait till ksub’s copy arrives. Clippa may be sat in the corner for a while, wanting to go over to stanshall and lick his face but not quite being able to yet. You know how it is.

The old team eh? I’m raising a glass to the resurrection tonight.

He came back a damn sight quicker than Christ! Perhaps clippa is right, he is the antichrist

Also cheers Stan - naps are hard to come by, frankly I don’t know how I’m surviving sleep wise but it’s the toddler keeping me up not the newborn. Shmups are good in that I can play for 5 now and again, see how it goes!
Top
Post Reply
1724 posts