This is where you can deliberate anything relating to videogames - past, present and future.
Post Reply
7 posts • Page 1 of 1 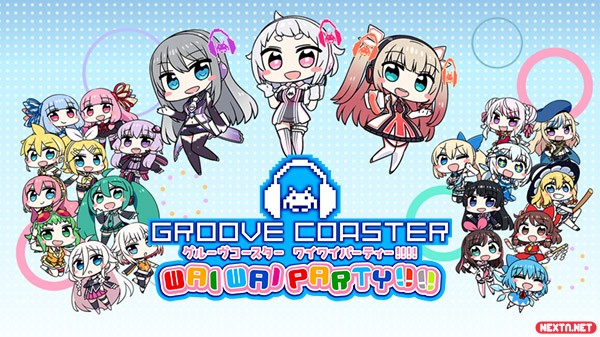 This is a gorgeous, fully-featured Japanese rhythm game with lots of tunes by the legendary in-house Taito band, Zuntata, which means some really cool surprises alongside the usual J-pop. Having only ever previously played this at Arcade Club, I've stumped up for the Switch version which I found while scrolling through the eShop.

What an utterly glorious game.

At the arcade, I found it baffling and overwhelming, not least because it was all in Japanese, but also because the music was unfamiliar and also clashing with the sound of several other games nearby. Headphones on and in my hands, it's a very different proposition and it's already one of my games of the year so far.

Rather than tapping in time with notes falling down the screen, your avatar sweeps around a 3D space as if on a roller-coaster track, hence the name, and the note icons appear in your path. This might sound confusing but it's very straightforward for the most part and adds a great deal of eye candy and variety. The patterns and background animations really bring a lot of personality to each tune. I'm sure that some will be a bit more rote but of the dozen or so I've played so far, many have been superb. I just played a remix of a tune from the Darius Gaiden soundtrack and the background was full of neon vector mechanical fish bosses.

Beyond the core gameplay and flair, there's an unlock structure to the Mission and Challenge modes which makes you want to try different songs and get better at them, rather than dismiss them because the first few seconds don't sound appealing. That's often my issue with rhythm/music games, I end up playing only the same few tunes until I exhaust them. This should mean greater lifespan, but the reality is that the actual game is so much fun I'll be playing it on and off for a good while, anyway, I'm sure. The unlockable stuff is the usual, predominantly skins and avatars and titles, as well as different sound effects, but there are also some unlockable in-menu 'navigators' who chat away while you're selecting different options. It all feels bounteous as fuck, quite frankly.

Caveat emptor: Aside from the odd dip into the Zuntata back catalogue with Bubble Bobble and Darius and some anime soundtrack stuff (like the fantastic theme from Neon Genesis Evangelion), it's predominantly Vocaloid J-Pop with a lot of throbbing basslines and glistening synth lines. It's not at all my usual kind of thing but it complements the gameplay and flashy visuals very well and adds to the arcade experience. There's also a fair bit of DLC available as is the way with these games, including Undertale and Touhou soundtracks, but there are a hundred songs in the base game so you won't run out quickly.

*Here's a bonus clip of the song Welcome to Japari Park on Master Mode. This should give you an idea if this game would be fun, tolerable or downright hateful for you.*

I haven't had this much pure distilled fun with any game since...I wanna say Mushi Futari. Honestly.

ESP Ra.De. Psy was my GOTY 2019 but had I played this, no contest, and I really really dig ESP. Groove Coaster has tapped into something instinctive about rhythm I've not really experienced outside of actually playing the drums or DJing. It feels just right when you hit the syncopation, extremely satisfying and euphoric. I've had so many moments over the last couple of days where I've cracked into a massive grin while playing and felt shivers of excitement and warm floods of dopamine. It's like the feeling I chase playing shmups but even more distilled.

It might seem odd in a way to compare this to shmups but there are lots of parallels. When I was really grinding out Futari God Mode to hit the extend in stage one, I said that it was basically a rhythm game. The timings on the cancels and delayed destruction and stuff was something I could feel when I visualised the run as I drifted off to sleep or when I was daydreaming. What did KSub describe this as the other day? Phantom inputs? That's exactly it. It's a strange feeling but quite a satisfying one in a way. You can feel things baked into muscle memory, in the same way that if I imagine a football coming towards me, I can feel my foot ready to cushion it. Likewise, when I listen to some of these songs now away from the game, I can feel myself tapping and pressing and sliding and 'scratching' the rhythms and the individual syllables of the vocals.

Beyond that, you have a very precise perfectly repeatable challenge which is something I generally really enjoy about shmups. I do love the grind, as long as the game is inherently fun and stimulating to play. Something like Futari or Espgaluda 2, you have goals for different sections but if you're there or thereabouts, you enjoy the visual and auditory rewards. They're very generous games. Groove Coaster is a bit stricter, arguably, but the rewards come thick and fast so if you blow your timing, you can get straight back in on the next beat and you're enjoying it again. While I would say something like Dodonpachi Daioujou is undoubtedly a better, deeper, more satisfying game, it's also much more punishing and obtuse and you have to put in a hell of a lot more for your return, to speak in those terms.

I just spent a couple of hours on and off practising one song to get my first Perfect run on Normal Difficulty. Is it as difficult or rewarding as getting a full chain on DOJ stage one? No. Is it more enjoyable, pound for pound, moment to moment? No doubt whatsoever. Not once did I get frustrated or feel anything other than 'this is so fucking cool, I love this game'. In terms of shmups, it probably reminds me of Psyvariar Delta most of all because you've got that constant rush of LEVEL UPPPPP. 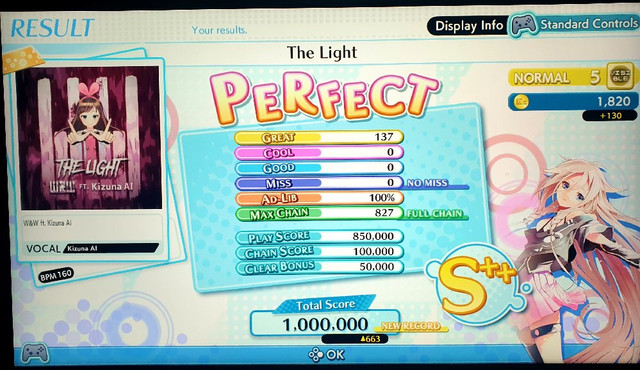 The gameplay is pretty much flawless for what it is, extremely easy to pick up and really tough to master. The challenge is transparent and fair. It's very elegantly structured to encourage you to try all the songs at different difficulties and so on, the curve is superbly balanced. The issue is of course whether you like or can stomach the tunes. As a committed snob, I never ever ever ever ever imagined I would be listening to 170 BPM Euro/J-trance with Vocaloid singing, never mind dancing round to it absolutely buzzing my tits off.

I could end up just talking to myself in this thread, but I really don't care. FF7R might beat this for my GOTY2020 but Cyberpunk and TLOU2 haven't got a hope in hell.
Top

Takes me back to the days of Helter Skelter raves and happy hardcore from 7pm to 7am non stop...

I'm still having a blast with this, will be one of my favourite games of the year for sure. I think fifty quid is going to be a bit much for most people for a rhythm game, I totally appreciate that, but it's one of the very best I've played. Really exhilarating. It's niche and because of the aesthetic and music selection, it's unlikely to appeal even to many rhythm game fans but if they ever come out with a demo, I'd urge anyone to give it a go. Totally made a believer out of me.
Top

Just a brief heads-up that this is on sale for £37 on the SA eShop. Still not cheap but the best price it's been.
Top

I'm still playing this every day and still loving it. It's overtaken Tokyo Mirage Sessions as my most played game of the year so far (though Animal Crossing must be hot on its heels). I went back to one of my early favourites from when I first got it and managed to capture a Perfect run. Some serious restart syndrome here and I literally punched the air when I finally did it.