This is where you can deliberate anything relating to videogames - past, present and future.
Post Reply
9732 posts

Damn. I clearly need to up my game. I should say that I also have two 'tinnie' and one 'tinnies' as well, which gives me a slightly more respectable total.
Top

Simonsloth wrote: ↑
October 4th, 2019, 8:45 pm
I forgot about that side which I was very fond of. It took peace walkers quite modest low key attempts and multiplied by ten. I ended up auto sorting my staff as there are nearly 3000 of them!

You didn’t fulton three thousand guys, did you?

Was there another way to acquire staff?
Top

Now that’s a stat I can get behind.

Tonight Matthew, I finally started this..... 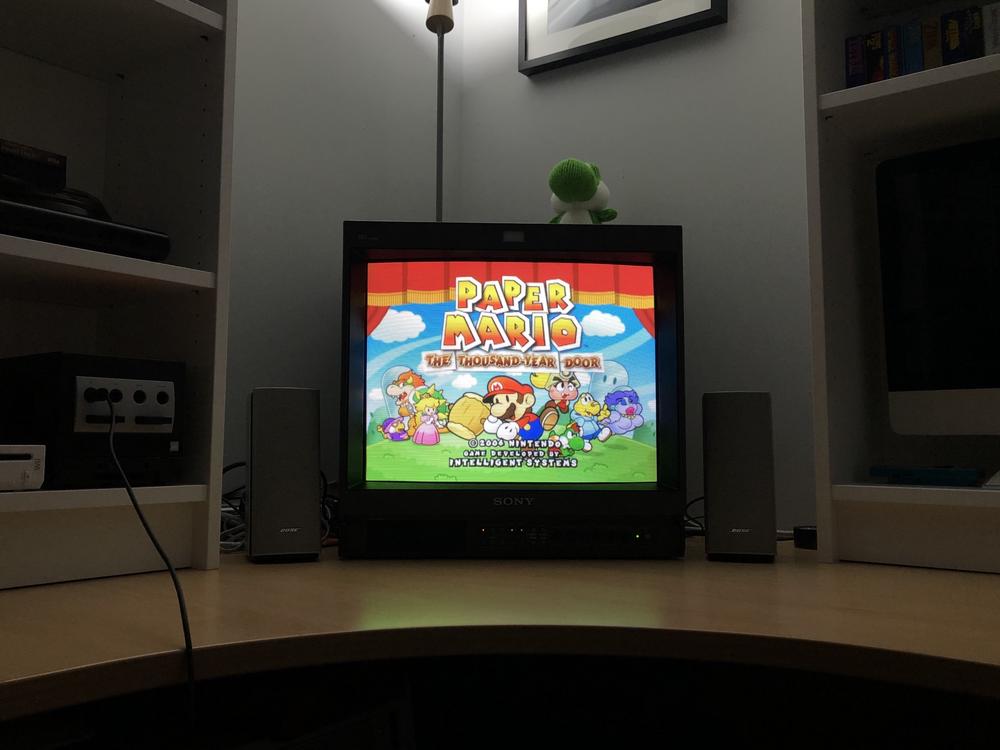 (next time can you use a Wavebird controller please, so your wire doesn't ruin the wallpaper

Simonsloth wrote: ↑
October 4th, 2019, 8:45 pm
I forgot about that side which I was very fond of. It took peace walkers quite modest low key attempts and multiplied by ten. I ended up auto sorting my staff as there are nearly 3000 of them!

You didn’t fulton three thousand guys, did you?

Was there another way to acquire staff?

Considering my playtime is 143 hours I probably individually fultoned a lot of them!
Top

(next time can you use a Wavebird controller please, so your wire doesn't ruin the wallpaper

I've been sorely tempted to re-play the Paper Mario series. TYD is screaming out for a re-release
Top

I've been sorely tempted to re-play the Paper Mario series. TYD i
Top

I generally don’t use my Wavebird, as they don’t have the rumble feature, not that I’m a massive fan of rumble but I’d rather have it than not.

Plus, I have that glorious brand new Smash Bros. Ultimate Gamecube controller, so I’m using that at the minute.


I’ve just got to Hooktail’s castle at the end of the first chapter - about three hours.

It’s all very charming and there’s an awful lot of this that clearly came across in Colour Splash.

The production on it is superb, the music, the menus, the art, the design and the writing are all things that were obviously given time and thought.

I went back to Resident Evil 3 last Friday and summayous hung out with me for that, which was great!

Also been playing through The Evil Within as I'm standing in for Darren on the podcast we're recording next weekend. My time for that is sparse as it's not a game I'll turn on when the kiddies are still up. I've got about 4 nights left for that and I'm in Ch. 6 out of 15, playing on Survival difficulty. Wish me luck!
Top

All about the AAA titles for me at the moment

Last week I finally got the True Sons stronghold finished in The Division 2 and made it into the end game. It's nice to see people around the main hub at last and much as I like that game, I'll be first in line to say it hasn't got the edge that the first game has/had. Considering there is so much more available to do in the second, I'm a little disappointed that it hasn't taken off more but I can't say I'm surprised

This week however I've been bouncing between two of the larger titles released.

Ghost Recon Breakpoint is a great progression from Wildlands, though they have definitely cribed a few notes from the Division and from Destiny. It's a little less unforgiving than Wildlands was but it doesn't suffer for it (though I am quite glad I've picked the medic class with it's self-revive option ...) and I'm looking forward to this being something that I can just dip into over the coming months.

Or at least I would be if Destiny 2 also hadn't gone through a massive overhaul. I burnt myself out on this game earlier in the year and haven't really touched it in several months but this is a much improved game. Tried the first Shadowkeep mission last night and that was one of the better missions I've played on anything for a while. It cashed in a little on nostalgia and quite a bit on the lore but it acts like a clarion call (in and out of game) and I'm genuinely looking forward to carrying on with it (once I can pry the TV from daughters currently on a Mario Party kick ...)

For a break from those big titles, I keep dipping into the Escape mode in Gears 5 (yes I know ...). Tried this with domsbeard from the forums last week and it works as a short dip into the Gears of War playstyle without having to deal with rolling Gnashers or putting aside a decent amount of time to stand against the Horde. My one issue with this is the people speed running to the end and immediately triggering the end, without checking to see where the rest of the team is. More than once, I've been downed by a huge mob of Swarm spawning in around the final ramp and watched the doors close as I futilely crawl to reach the exit. I like escape - I'm just not keen of the people who don't understand what a team game is ...
Top

Finished Super Metroid on Switch. Took a while to grab me but I’m glad I stuck with it because by the time I got utterly stuck a couple of hours before the end, I couldn’t stop thinking about it and couldn’t wait to get back to it again! Still not massively keen on the sci-fi setting, but it’s definitely a great game.

My old iPad favourite Super Crate Box finally made it to Switch, and its fiendishly addictive single-screen arcade platforming feels great on a controller and big (or small) screen. Bargain at less than £4 too!

There’s a nice Medievil demo available on PS4. For better or worse it still feels like it used to, but I don’t think the graphical upgrade is enough to justify buying it again when the original is sitting a few feet away from me. I wouldn’t have thought about playing it again otherwise though, so demo kind of did its job!

Couple of hours also spent getting into my GameCube eBay pick-up Viewtiful Joe, which is utterly wonderful.

Still enjoying exploring Apple Arcade. Minimalist dark fantasy Souls-like Bleak Sword is definitely one of my games of the year, and I’m really hooked on top-down, Burnout-influenced Speed Demons, which is a real joy to play on a touchscreen. Also finished the uber-stylish, simple and brilliant Sayonara Wild Hearts, and The Pinball Wizard, which is a mostly fun but often frustrating rogue-lite / pinball cross. Load of stuff on the go here and I’m now really tempted to keep going after the trial.
Top

I know, me too. I've owned the N64, Gamecube and Wii ones over the years, but only ever played the N64 one. I ended up selling them all in the end

I really really really wish that the performance on Link's Awakening was better. Every time I fire it up, I find myself despairing, pretending I can't notice the juddering between 30 and 60fps every ten seconds or so. It's fucking horrible. I feel like I'm having a stroke playing it. Why oh why did they release it like this? I've bought some right shit on the Switch and gambled foolishly on stuff I knew I wouldn't like, I really have, I've wasted hundreds, but this is the only thing I genuinely feel disappointed about. Zelda shouldn't be a gamble. Gutted.
Top

Good god, this is addictive. I love it!
Top

Good god, this is addictive. I love it!

It is, you find yourself restarting races even if you mess up the racing line even slightly on one bend!
Top

I got a laptop last week and decided to try Planescape: Torment over the weekend.

I wasn't sure whether I liked it at first so I just went with it and before I knew it I was 8 hours in telling myself "I'll just talk to the psychic Rat group before I go to bed".

You start by waking on up on a mortuary slab, your character remembers nothing so you have a vague idea of what you need to do but not how to do it, if you're like me this means you will talk to a lot of unimportant NPC's and go over the same topics over and over again. The fetch quests can get quite tedious when there isn't fun dialogue/characters to fill it in, luckily most of the time there is. I've met a real variety of characters already; however, there isn't a real variety to what they look like which can result in skipping through the same conversation over and over until you come across the one zombie with something different to say. I'm starting to realise that a lot of the NPC's aren't being completely honest or withholding information from me, some know more about me than they let on. Now I'm feeling paranoid, I'm wondering how much I should reveal about my character when I speak to people, whether I should ask less questions in general and if I've already given too much away...


Oh and I've got one star left in Super Mario RPG, it's been delightful