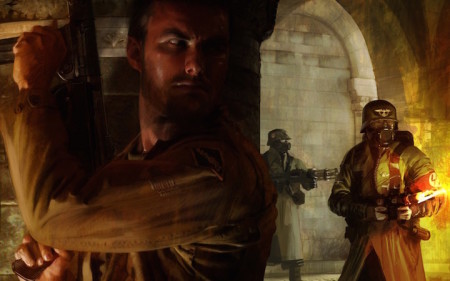 “But what am I supposed to do with all this cheese?”

In the second of four Wolfenstein podcasts we turn our attention to Gray Matter’s 2001-2003 PC and console FPS, Return to Castle Wolfenstein. Leon, Tony and Karl see what BJ Blazkowicz got up to (shooting fascists) in this id Tech 3 take on the Wolfenstein 3D formula of corridors, souped-up super Nazis and hidden caches of ill-gotten gold. A couple of our listeners just about recall the F5/F9, quicksave/quickload shenanigans too.

Cane and Rinse 161 was edited by Ryan Hamann.

Re: Return to Castle Wolfenstein - Cane and Rinse 161

Another great podcast here chaps!! I had to listen to this one as I first played RTCW on my home-made PC in 2002. I completely agreed with Carl's commets on the summary section of the cast - there is a pure connection to the player and how you play it and it really is a classic game on the PC, up there with the heights of Doom/Quake. We all know it won't win awards for graphical prowess but, it just plays so damn well and it has such an atmosphere. The only way to play this game was with a mouse and a keyboard; the control you have via this method is second to none (in fact I struggle ever so slightly with modern FPS with a gamepad!) and it made me feel "at one" with the game. I've since had heated discussions about the pro's and cons of 'mouse Vs gamepad'

This was my first proper investment of time in to a PC FPS, and I was just positively lost in the experience. Leon was right about the music on loop, thats one thing that should of been addressed but hey-ho!!