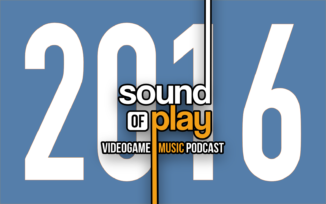 This week, Sound of Play brings you a musical collage — a constellation of audio memories from the year 2016. Rediscover favourites from 2016 or encounter tunes for the first time. This mix contains excerpts from 189 of the year’s games.

We challenge you to test your knowledge of videogame music by trying to identify all of the games included within, and you can collaborate with members of our community by sharing your knowledge in this here forum thread. Soon, a video revealing the identity of each game included will be posted on the Cane and Rinse YouTube channel

Sound of Play 192 was edited by Ryan Hamann (@InsrtCoins)

Remember, usually it’s not just about what we like, so venture over to the thread at the top of this forum and put forward your own suggestions so that we might include them in future shows.

by Flabyo
I’m expecting I’ll do better here than I did on the last one... might well have a go this evening.

by KSubzero1000
My guesses (time stamps are from "the podcast with the spoken intro"):

I didn't recognize that many, especially towards the end. A lot of them fell into the category of "I swear I heard this in one of the E3 trailers", but that didn't exactly narrow it down.


These medleys of yours are really impressive, Ryan. Thanks a lot for all the effort that goes into producing them.

Again, the video (with the answers) will be posted one week from today. YMMV, depending on how strict the copyright bots are in your country.

by Flabyo
Didn’t get as many of these as I thought, clearly me not having a gaming PC means I’m missing out on a lot of wacky Steam adventures.


Spoiler: show
Things I’m pretty certain are in there:

Mafia 3 (hold on, I’m coming... plays during the drive up to the final mission)
Stellaris (only got this cause I’m playing it now on XBO)
Super Hot
very Doom
Batman: the Telltale series.
Overwatch
Street fighter 5 (raaaa-shi-doooooooooooo)
Oxenfree
Voez
Deus Ex: Mankind Divided
Shadow Tactics: Blades of the Shogun (less than 3 seconds of it! Must remember to put in a request for that one)
The Flame in the Flood (which I cant be smug about knowing cause Ryan played enough to have the title drop)
Firewatch
Uncharted 4

Stuff that I think might be there... but I’m not sure:
The Witness
Gears of War 4
Skullgirls Encore
Odin Sphere
DOA5
Prey
Nier Automata

And at least a dozen that I know I’ve heard but can’t place.

by ColinAlonso
First time I got to listen to one of these when its released. So here we go.

I also cheated and looked up on Wikipedia that 1:13:45 is from Mirrors Edge Catalyst.

by InsrtCoins
Nice work, folks. Remember -- music behind the vocal clips is not always from the same game that the vocals come from, so even if you identify one portion, it may not be telling the whole story

Y'all are even getting some of the really tricky ones.

by Flabyo
Argh of course.


Spoiler: show
I do remember that Chvrches were contracted to do a piece for something but I couldn’t remember what it was.

Goes to show how poorly Catalyst did though.

by InsrtCoins
Certainly not as good of a theme song as Mirror's Edge 1's.

by JadePhoenix
In addition to what other have mentioned, I heard
Ori and the Blind Forest
Stardew Valley at 1:14
Velvet's Theme from Tales of Berseria at 1:39, which is kind of cheating, since it didn't release in English until 2017. An easy one for me, since it's literally my phone's ringtone

by ratsoalbion
The game, and the tune, were first released/copyright 2016. How is that cheating? We’re an international show and the game is Japanese - and we always go by the original publishing date (unless we make a mistake)!

Unless it has English vocals here, in which case you have us on a technicality!

by JadePhoenix
Fair enough, although I doubt the majority of your English-speaking audience were capable of playing it in 2016...
As for Ori, I guess it must have been the definitive edition in that case.

by ratsoalbion
Now see I do think Ryan’s cheated a bit there, if the piece he used was also in the original game.

But as he says, there are bound to be a few errors, quirks and anomalies - all part of the fun!

by InsrtCoins
I don't believe there is any Ori in there, but if you can point to a timecode, I can fish up what it is.

Also, yes, I'll double-down on what Leon said about release years. I count a game's release year as the year that it debuted, regardless of the region or system. Even if our audiences may not have played it until later, the game (and its music) was being enjoyed by others elsewhere. The only instances in which I would include a game in a year other than its original launch is if it had a different soundtrack on another system (be it a complete re-composition, like Donkey Kong Country 3 on GBA or sounded different enough to count as essentially being a completely different soundtrack, like a game releasing on both PlayStation and Game Boy). Additionally, I may include a game in multiple mixes if it is episodic (Kentucky Route Zero, spanning multiple years) or has substantial DLC / expansions (World of WarCraft).

by JadePhoenix
I thought that was what I heard, but it's certainly possible that I'm just wrong.

by InsrtCoins
There is an Ori-sounding song from FRU (my GOTY for 2016), but unfortunately, I can't find videos of it online to point to for reference. I had to record my own audio from the game itself.

by InsrtCoins
I should post here that the video and accompanying answer key are now live.

by ashman86
I'm getting caught up on a few episodes I missed, but I wanted to pop in here and thank InsrtCoins for another super-cool mix! Nice work!
All times are UTC
Page 1 of 1