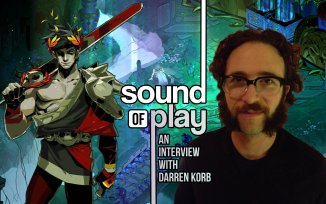 Since 2011's Bastion, the small, stable team at Supergiant Games have been putting out distinctive, emotive, aesthetically rich games. While their second and third games Transistor and Pyre garnered plenty of praise, they were somewhat headier than what came next.

Launched in early access in 2018, the action roguelike Hades saw its 1.0 release in 2020 marked by rave reviews. The game’s run-based design brought in new fans to the genre thanks to impeccable storytelling, character design and voice acting. Unsurprisingly, Hades has been nominated for, and won a bunch of industry awards; and appeared on, and often topped Game of the Year lists everywhere.

Like a mad musical scientist, Korb has been fusing genres to make all of Supergiant’s soundtracks stand out from the crowd. For Hades, his blend of ‘Mediterranean prog rock Halloween music’ has especially hit home with fans — a truly riff-tastic triumph of a score.

Music featured in this podcast by Darren Korb unless otherwise credited:

This Sound of Play Extra was edited by Thomas Quillfeldt.

You can subscribe using Apple Podcasts or you can just simply download from here instead.
All times are UTC
Page 1 of 1