Zelda II: The Adventure of Link - Cane and Rinse 204

Zelda II: The Adventure of Link - Cane and Rinse 204 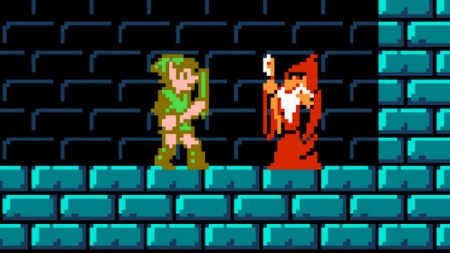 In the second of our seventeen (!) planned The Legend of Zelda podcasts, we tackle notoriously tough ‘odd man out’, Zelda II: The Adventure of Link.
Indeed, the game’s excessive difficulty put paid to planned panellists Josh and Sean, leaving Leon, Darren, Ryan – and not forgetting a wonderful heap of community contributions – to attempt to adequately convey the experience of playing through Nintendo’s second Famicom/NES Zelda title.


Music used in this issue:


Cane and Rinse 204 was edited by Sean O'Brien.

Good episode. This must've been tricky, it really tests the 'no game is objectively bad' rule you work to.

I try to make it a habit to find useful game design lessons in every game I play, even ones I don't like. And I always try to make that a positive design thing (i.e. 'this is a good idea, how can it be used?') rather than write endless lists of 'don't do this'. I don't always succeed though, and it's really hard to find the positives in this one.

In the cast you wonder what the Zelda series might've been like later if they'd stuck with this template. I think it would've been a lot like Castlevania. Symphony of the Night could be said to derive from a lot of the ideas explored in this one. I think you're right that all roads would've lead to Ocarina anyway (it's surprising that Konami never did get Castlevania to work in 3D).
Top

Thanks. Yes, we've already received one tweet from somebody who prefers Zelda II to A Link to the Past. While I find this incredibly hard to empathise with, it shows why our emphasis on subjectivity is the right one, in my opinion(!).
Top

I am glad Zelda 2 exists. Playing it made me realise how much more recent games I love took inspiration from it. It's really the execution I have issues with in this game, because I've been sold on its concepts by games that came after.
Top

I saw a conversation between Josh, Darren and Leon on Twitter about a Cane and Rinse listener who felt that the crew didn't give Zelda II a fair shake, saying that by using save states, you guys missed out on playing the game the way it was meant to be played.

I am NOT that listener (though I hope that he/she does end up writing up their thoughts as well) and I thought you guys did an excellent job on the podcast. I do kind of agree with them about the save states though (specifically for this game).

I played this game because of the podcast. It was my first time playing Zelda II and I was surprised at how much fun I had with it (up until the last temple). I don't actually play that many NES games and I think that modern day game mechanics have, for the most part, really improved the experience of playing games. I'm just trying to make clear that I'm not A) a Zelda II super fan or B) someone who believes that gaming peaked in the 8-bit era and it's been downhill ever since. I also don't think that there is anything wrong with using save states to beat a difficult game.

I would recommend that people not use save states for Zelda II though. Not because you're not "a real gamer" if you can't beat it without them, but I think that heavily using save states actually brings the biggest frustrations of the game to the forefront while at the same time, it cuts you off from some of its more interesting mechanics. The most obvious example of this is the RPG mechanic. Even if you keep dying and not making progress in a dungeon, you are gaining experience points that allow you to increase your health bar, attack or magic. If you instead use save states before every room or enemy encounter, you might win the fight, but you'll only get the experience the one time. I think that adds up so that you might have an underpowered Link later in the game that makes it more frustrating. Another example is that there are fairies placed around the over-world map that make the many trips you have to take to return to the dungeons more strategic. You don't have to be perfect going through the caves because there's a fairy on the other side. You just need to make it through without losing a life. Compare that to stopping and starting over and over trying to get through without taking a hit.

And that leads into my biggest reason I think Zelda II benefits from not using save states. The combat can be unforgiving and it takes a lot of practice to get used to it. I found it was also heavily based on flow and continued movement. A lot of the enemies could be beaten by running, jumping and slashing, as long as you pulled yourself back at the last moment. Other enemies could be defeated by running forward, sliding along in a crouched position and doing a slash attack that would get under their shields. Both strategies depend on you getting in a good rhythm to perfect them. And I think using save states keeps you from getting in that rhythm. If you save as you enter a room and then try to beat the shielded enemies by slashing up-down-up-down-up-down until they die, it gets unbelievably frustrating.

Zelda II CLEARLY wasn't everyone's cup of tea and I totally get why so many people didn't like how difficult and frustrating the combat was. So the idea of using save states to mitigate some of that difficulty is completely understandable. I just think that in a weird, counterintuitive way, save states make the game less enjoyable and more frustrating.

Though that final temple sucks and you should definitely use save states to beat it.

Great post sir, and very much the essence of what our more reticent correspondent was saying to me.

Food for thought certainly and something we shall consider carefully when tackling certain games in future.
Top

It really was a needs-must kind of situation with Zelda 2 and save scumming. If and when we do get to play similar games in the future, i'll keep your words in mind!
Top

Im playing this now in my effort to try and make it through all the Zelda games. I found the first one tricky enough but this seems ridiculous.

The RPG mechanic after the first couple of levels requires a ludicrous amount of grinding which saps any enjoyment out of the game. I’m going to stick with it but I don’t know whether I’m going to finish it if I’m disliking it this much.
Top

I pretty much agree with everything he has to say and I’m not even as far in as him.

I’m going to persevere out of pure bloody mindedness rather than enjoyment and I made a tiny bit of progress tonight.
Top

I’ve negotiated my brick wall and am enjoying it again. In a really bizarre way it reminds me of dead rising. I found it impossible to get through that game until I realised once you died your experience carried over so starting again was part of the gameplay cycle. I also think I was grossly under levelled and hadn’t taken the time to learn the enemies attack pattern.

I still can’t manage to deflect all of the annoying boomerangs and I am spamming the heal spell now but I’m not contemplating throwing my DS against the wall anymore.

I am a bit scared about what happens when I reach the max level which is only 8 I think and I have to tackle the last dungeon which is supposedly the hardest of any Zelda game.

Feeling chuffed with myself nonetheless.
Top

Good stuff. Persistence really can pay off, but not many players have the inclination or fortitude to persist (I include myself in that).
Top

I actually feel the opposite to my intial post and impressions. I was trying to brute force and rush my way through at first but it actually requires patience, strategy and a healthy chunk of luck.

I’m pleased I stuck with it as it’s one of the most rewarding experiences and challenges I’ve had with a game for a long time.
Top
Post Reply
13 posts • Page 1 of 1