Here's where you can arrange meet-ups and game nights on the platform of your choice.
Post Reply
22 posts

Did anyone else pick this up? I've had a great time playing it these last couple of weeks, but a tactical game like this only gets better when you team up with some nice people - so here's a place to make that happen!

I'm on PS4 myself and my PSN ID is Grimsgrams84.
Top

I will pick this up one day, when it's after my wedding and cheaper. I love Rainbow Six as a series but honestly, I can't justify 40 quid on a game which doesn't have split-screen co-op like the other games did. It feels lacking in content but hopefully, by the time I get round to it, it'll be cheaper and more robust.

It's a heck of a game, no doubt - perhaps surpassing even Splatoon itself as my favourite shooter this year. And while it is expensive for a multiplayer-heavy game I felt alright about buying it due in large part to the fact that the important DLC (maps/operators) will be free, insuring that the userbase doesn't get segregated. That said, they probably should've priced this at £30 because I think the premium price is driving a lot of people away. But yeah, if you do get it one day let us know!

Edit: Apparently the new operators are not as easy to get for free as I thought - I just read that each costs something like 20.000 'renown' which takes something like 15-20 hours to earn in game.
Top

Hey, so, now that a few more of us have it, should we try to schedule something?

I know myself, Darren, and Karl all have the XB1 version. Anyone else?
Top

I'm constantly on it lately and really enjoying it. Karl and I were discussing about hosting a custom game with just us lot battling it out.
Top

Oooo I've got it but not really played it yet. I'd be up for some games as don't really fancy playing with randoms and no one else seems to have it on my friends list.
Top

Two new operators and one new map feature in an update this coming week.

It's free for all but the renown needed to unlock the new characters is ridiculously high. Hence the 50% renown boost this weekend?

The update brought with it the option to disable v-sync on consoles and I noticed that if you do, Terrorist Hunt (on PS4 at least) runs at what looks to me like 60 fps rather than 30, albeit with screen tearing in places. So if you felt the switch between Multiplayer and Terrorist Hunt was a bit jarring then this option might be for you.
Top

Hmm, I'll have to check out Terro Hunt with the Vsync off. That's cool that they added it.

I'm having fun with this game, but, for some reason, I constantly get disconnected from games. I don't have this problem with any other shooter I'm playing at the moment. It's incredibly frustrating and, honestly, I might trade it in if it keeps this up.
Top

Ah nice! I've seen the graphics options before but been too busy playing to have a dabble with them. Terro Hunt framerate drop isn't game breaking but you certainly notice it.
Top

We're having a game night on the Xbox One version of Siege this Saturday! 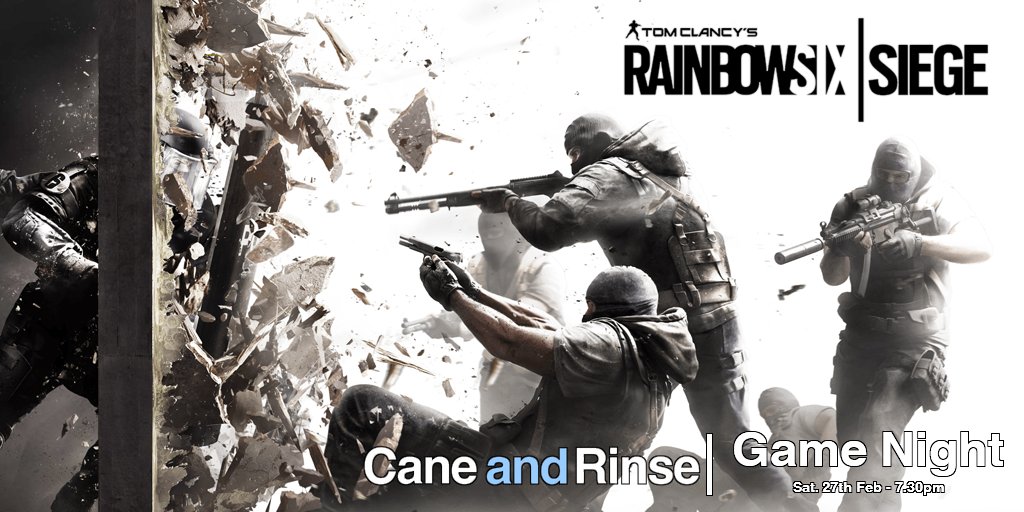 After hours and hours of trying, I finally got the achievement by killing an enemy with the Breach Charge. With the added layer of players being extremely well skilled in dodging them I found it to be one of the most frustrating achievements to get my head around.

I ended up using the bomb difuser strategy. It was perfect.

Any tips for noobs like me? I often die before ive even fired a shot
Top

Patience is the best advice. Let them make the mistakes.
Top

Rejoice, for update 3.0 is now available. Aside from a large number of QoL improvements, bug fixes and balancing changes it adds the second DLC pack: Operation Dust Line. The new operators are Valkyrie and Blackbeard. Valkyrie is a defense operator with 4 throwable sticky cameras and Blackbeard is an attack operator with a transparent rifle-mounted shield. The new map is 'Border', a border control station somewhere in the Middle East.

As with Operation Black Ice, the map is free and available immediately, while the operators will be available for purchase a week later either with premium currency or the in-game earnable 'renown'. Speaking of renown, there's now more to spend it on as they've added alternate headgear for the characters and weapon charms for purchase.

I'm 300 hours into ps4 R6 Siege and I absolutely adore it. Add me if you want Gamertag - Grimmfandingo
Top

I played through the situations but never really got into the multiplayer. Need to get back to it. I'm on Xbox one.

Any tips for a noob? I like the idea of the game and the strategy but found my multiplayer experience was a few minutes creeping round before being shot dead. Often without firing a single shot.
Top
Post Reply
22 posts