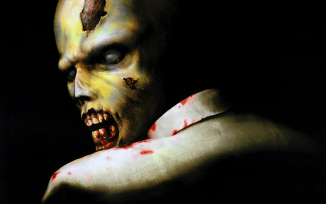 “How come you look so scared?”

The Cane and Rinse podcast’s seventh year commences with our look at the original 1996 incarnation of Capcom’s Biohazard – AKA Resident Evil. Throughout the coming year we’ll be working our way through the mainline, numbered instalments in the much-loved series, concluding with Resident Evil 7 in December. In this show, Leon, Karl, Michiel and Sean return to the gnarly Spencer Mansion with its digital tank controls, impossible item chests, spectacular dialogue and all. We also hear from a number of nostalgic community members, remembering their early experiences with the world of survival horror.

1. Save Room by Makoto Tomozawa/Koichi Hiroki/Masami Ueda
2. I Won’t Let This End as a Dream by Fumitaka Fuchigami

Cane and Rinse 301 was edited by Jay Taylor.

Good episode, guys. Everybody seemed enthusiastic about the subject matter and articulated themselves very well. Fantastic start into Volume 7.

In general though, I do prefer issues with a slightly more analytical focus and a greater diversity of perspectives than this one. There were times when it sounded like the hosts (and community contributors alike!) had trouble differentiating their endearing memories from the game itself. Personally, I really like the way you did it on the Mega Man issue, with contrasting the perspective of a long-term fan with that of someone coming in fresh after playing it for the first time. Combining one part nostalgia and one part analysis creates a very interesting dynamic.

Just something to consider when addressing old classics like these.
Top

Interesting point KSubzero1000. In one way I prefer everyone to be knowledgeable but I can also see the benefit of hearing someone new to it having their thoughts on it. I think the Zelda episodes were good for that too. That can sometimes be frustrating as well, it's like 'They don't appreciate my game because they didn't play it at the time!'

Only halfway through this episode but enjoying it so far. There is a really good question brought up that asks if the developers were aiming for a 'B -Movie' vibe on purpose. I don't know for sure but I'd bet my life on it not being intentional, it would have had a low budget and in those days you didn't have proper script writers. It would have just been a really low budget attempt at a cliche horror movie vibe, it was the start of an era along with MetalGearSolid1 that was seriously attempting to be like a movie after the failures of the FMV era.

My strongest memories of this game was heading out to the shop to buy it, I believe I was 16 and it was one of the first '15' rated games I'd ever gone out to purchase. I had a mixture of feelings about doing this, shifting between coolness for buying a proper adult game and dread of being interrogated and refused.

Also 16 was when I visited Australia for a year and just after buying it I had to stay with my parents at an apartment in Germany. I had nothing to do all day, every day for an entire month. I feel like Resident Evil and Mario64 were the final games of my life that I really hounded and explored every section of the game in every imaginable way. I played through every ending and then some, something I never do anymore. I also had a weird sense of proudness playing it in front of my parents, hoping they would finally understand that videogames can be just as good as movies. It didn't work.

I was one of those convinced for the longest time (at least a couple of years) that Barry said 'I thought you were a gerbil sandwich!' which I thought was a bizarre thing to say. However what he actually says is amazingly even more bizarre. I wish we could bring back that innocent era of unintentional awkward badly written dialogue instead of the polished crafting of today's scripts in games.
Top

caponeadam wrote: ↑
January 22nd, 2018, 10:27 pm
I was one of those convinced for the longest time (at least a couple of years) that Barry said 'I thought you were a gerbil sandwich!'

Great show. Really want to play this now more than the remake

. Maybe I will have to pick up a cheap Vita as I bought all 3 on that.
Top

Is there a schedule for vol 7? I seem to remember you usually post it around Xmas/NY, but I can't seem to find it.
Top

We made a fairly big deal when we announced it!

Don't know how I missed it. Plenty to look forward to in there.
Top

Ahh shoot sickened that I miss this! I’ll be back for my favorite game in the series Resi 2

. Maybe I will have to pick up a cheap Vita as I bought all 3 on that.

If I would have to choose, I'd always go for the remake, but I was surprised to find that the original still has something over the remake... warmer colours and comic relief in the form of the cutscenes, mainly.
Top
Post Reply
10 posts • Page 1 of 1