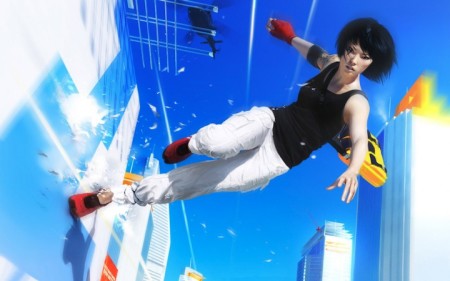 We mantle into Volume Two by reflecting on the strange time of 2008, when Electronic Arts were championing new ideas, first-person shooters didn’t need guns and freerunning was relatively new to videogames. How was erstwhile Battlefield developer Digital Illusions Creative Entertainment‘s experiment received? Should they have dropped guns altogether? Will they be allowed to flex the ‘C’ in their name again in a sequel? Thoughts on these questions and more as Tony, Karl, Sean, Darren Gargette and James tiptoe carefully along the Mirror’s Edge.

looking forward to this one!
Top

Really enjoyed the show guys, I have to agree with Karl that the heart of this game is the time trials and speed runs, watching some of the world's best times in replays was incredible. Like Karl said, you see totally new routes. I did do some of those and did enjoy them, but found them a little frustrating at times.

Overall great show and it's made me want to play the game through again!
Top

I think the time run stuff is cool, but the main campaign was superb! I come from the angle that I played on normal difficulty, and didn't use guns. I'm of the opinion that this is the only way to play Mirror's Edge...and I'd love to know what the game designers thought in that sense. Was there a pressure to put gun combat in?

Anyway, really enjoyed the episode guys, and it gave me a chance to listen to that wonderful music again. Maybe we should do a time trial challenge at some point on this

Dr Mcfluffin wrote:Anyway, really enjoyed the episode guys, and it gave me a chance to listen to that wonderful music again. Maybe we should do a time trial challenge at some point on this

I would most definitely be up for this. Been too long since I put pressure on my old TT times!
Top

I'd also be up for some of that!
Top

I take it none of you guys were inspired enough by the show to give the DLC a shot?
Top

Excellent job on the Mirror's Edge podcast. Great to hear how much the C&R team enjoyed it and their views on with game.

Personally I liked everything about Mirror's Edge (except the horrible vocal track "Still Alive", other than that the games instrumental soundtrack is amazing, "Kate - puzzle" being the most memorable).

Played through the game about 6 times on PS3 & 360 and would love to complete them but those time trials and speedruns are seriously challenging. Well done to anyone with platinum or 1000G!