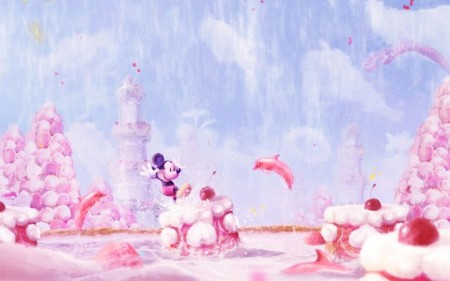 “Hurry! Before Mizrabel uses her powers of illusion to make herself look like Minnie, and make Minnie look evil like her”

Leon, Tony, Darren Gargette and special guest/Mega Drive (Genesis) guru Dan Clark of the AI Bots podcast return to the 16-bit era for a retrospective on these three SEGA AM7 productions for Disney featuring Mickey & Donald. We delve deep into the murky world of their development and also take a look at some of the other Disney platformers of the era. Naturally the icing on the cake is your correspondence and Three Word Reviews. ALAKAZAM!

I think my comment might've suggested world of illusion to be shit and that's not really the case, it's still a fun game I just prefer the others over it.

Great show regardless, it's always nice to play along with the show. Thanks for giving me an excuse to go back and play them again (more retro shows please)!
Top

Really enjoyed it. Dan Clark was an excellent addition this show

"Almost a fifth…" or exactly one sixth.
Top

My mental arithmetic isn't quite as fast as my mouth

On a related theme check out this review http://www.metro.co.uk/tech/games/91843 ... -epic-fail. I so wanted this game to work but judging by this review that ain't going to happen.

The media people I know are giving it a right panning. But that's probably best left for an official Power of Mickey 2 review.

That said, reviews are seemingly going the way I was expecting.
Top

Just played through Castle Of Illusion and Quackshot off the back of this podcast. As you all seemed to agree - they're still perfectly playable today, I got a lot of enjoyment out of them. I will say though, I still think the Master System version of Castle is better than the Megadrive one.
Top

I have heard this opinion quite a bit but I've not spent enough time with the Master System version to comment really. Also, although I try not to be too shallow about these things, the audio visual appeal of the gorgeous MD version enhances the enjoyment a lot for me. Master System games tend to look and sound very plain, by and large.
Top

I remember firing up the Master System version as a kid - before I'd ever played the Megadrive one, and being blown away by the gorgeous graphics. I used to use it as the game to rub my NES owning friends nose in to prove beyond doubt that Sega were winning the graphics war, lol. I always seemed to remember the Master System version being quicker and smoother than the Megadrive one, and replaying them back on emulators does seem to confirm this. I may dig the hardware out of the loft just to make sure, haha. But still, even now, CoI on the Master System remains one of the most, if not THE most visually pleasing games of the 8-bit era. It put a lot of Megadrive games to shame.

Yes, don't get me wrong, it's a nice looking game and looks really fun. I guess it was hard to play the 8-bit version after the 256 colour luxury of the 16-bit game. Also, I never owned a Master System. No doubt it had better static visuals than the NES did though (I never had one of those either).
Top

I had my haircut the other day and the subject of Castle of Illusion came up. He was adamant that the MS version trumps the MD one!
Top

But not his own job of cutting hair

Anyway come on Leon, it's not like you've got anything else you need to play at the moment is it!

Yes, so this is happening:

This was my first CnR podcast I listened to, and what a joy. Thanks guys!! I've found you now!

I only ever played this on the PAL Megadrive but boy what a great game. My old mate and I loved it and must of completed it loads back in the day! As was brought up in the podcast, I had to discover for myself what the full 60Hz version would bring and so I bought myself a JP Megadrive and a cpoy of this (a couple years ago now) - it just has to be full speed and full screen!! Just such a lovely game all round. Its definitly in my top 5 of all time.
Top