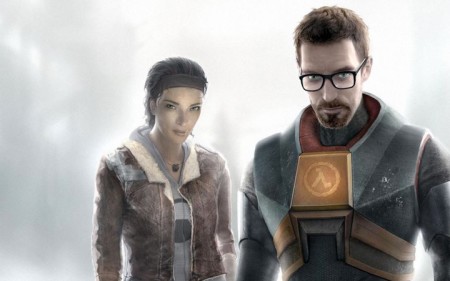 Some twenty years after defeating the Nihilanth on Xen, Dr. Gordon Freeman is brought out of stasis by the mysterious G-Man to defend humanity (and the Vortigaunt) against the alien forces who have enslaved the Earth in Half-Life 2. Leon, Josh and Karl combine to couple with Valve’s multiple Game of the Year 2004 award winner with all the tenacity of a still-beaked Headcrab. Naturally we also enjoy contributions from the forum and Twitter including your Three Word Reviews. This Issue of Cane & Rinse is dedicated to Isabella and Lux Atkins: 2 Whole-Lives.

If you are a Half Life fan...or even if you are not, you should check out "Escape From City 17" A low budget fan film

Cleaned the off-topic up a bit. Sorry for the confusion if you saw it.

As for the Half Life 2 show, I hope you all enjoy it as much as we enjoyed recording it, it's always fun to discuss a game which is not only held in incredibly high regard, but also one where perhaps not all of the views on the panel are quite so like-minded.

Great show and I'm going to go back to the Orange Box now and finish Episodes 1 & 2 ready for the next show.
Top

Man, wish I could have been there for the silent protagonist discussion. It's my biggest pet-peeve in gaming.

However, this show inspired me to actually try and finish HL2. I will finish it damnit.
Top

I should note, that I don't prefer silent protagonists over ones that talk, I just think for certain games it can be an effective design choice. For me, if the protagonist is silent, it means "I" am the protagonist. For Persona and Fallout I find this especially effective, because I choose dialogue choices "I" would make, rather than the character I'm playing as. And in Half Life, while I can't really communicate with the NPCs, I still feel like I'm directly interacting with them, and feel closer to them because of that. In Mass Effect, I am not playing as my self, I am role playing. Because Shepard has a voice, which gives her/him an identity all of their own. Same with Nathan Drake and John Marston. I don't play Red Dead Redemption the way "I" would act in those situations, I play it the way I feel John would. And there is nothing wrong with that, I love John Marston, Nathan Drake and Shepard. And I think those games in particular would be harmed if their protagonist was silent. But because John, Nathan and Shepard are characters in their own right, it stops me from truly immersing myself in the world the way I can in Half Life 2....Does this make any sense?
Top

Wanted to say that this podcast was excellent, I've only just finished Half Life 2 a couple of weeks ago. Motivation now received to finish rest of the Orange Box!
Top

Thank you! Hope you'll join us for the Episodes show in a few weeks.
Top

strickenmcq wrote:Wanted to say that this podcast was excellent, I've only just finished Half Life 2 a couple of weeks ago. Motivation now received to finish rest of the Orange Box!

Thank you, it was certainly a fun one to record, always nice trying to break down a game that's so culturally relevant and incredibly popular to see what makes it tick. Glad you're going on to finish the Orange Box, something I too am hoping to do before the years out.
Top

Count me as another one who got inspired to finish the game after listening to the podcast! The first time around, a few years back, Ravenholm (we don't go there!) left me mentally and physically exhausted and I quit soon after beating that section.

BTW, despite your strong recommendations to the contrary, I ended up playing through the PS3 port this time around: A friend conveniently lent me his copy. It's a serviceable port, but does lose frames in complex environments. Nothing game breaking, though, and I can proudly claim to have completed the game and the two episodes now.

Latest rumour is doing the rounds. PCG mag has a Valve page in the back.

To add fuel to the fire, that images may be the start of an ARG?

There's also a patch out for HL2 today. Is this actually happening?

The guy who works at the mag is claiming it was a joke. I'm confused and excited!
Top

Half life 3 and Dota 2 in one year, slow down Valve you'll strain yourself

dezm0nd wrote:Latest rumour is doing the rounds. PCG mag has a Valve page in the back.

Weirdly enough, I actually bought that copy of PC Gamer a couple of days ago for the first time in... well, ever. Did think it was a bit weird to have that on the back, but just guessed it was something to do with the huge DOTA 2 section in the mag.
Top

The floors relate to the games by what year they were released/announced apparently, hence 14 for HL3. Eep!
Top

I finally got around to playing some of this again, but I've run into a lighting bug. Everywhere is fully lit in the map, no shadows/dynamic lighting. I've tried a few of the fixes online, but none of them are working. Anyone else have this bug and manage to fix it? I'm running it on a GeForce 670.
Top

Valve have once again sanctioned a fan made sequel to Half-Life Opposing Force with Prospekt. Full character use and everything!

Interesting collection of moments where Gabe Newell has mentioned either episode 3 or Half Life 3 in the last ten years.

I've resigned myself to thinking that this game will never come out.
Top
Post Reply
21 posts