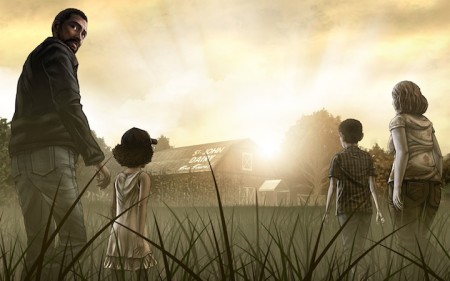 Clementine will remember that

From a secure location, Cane & Rinse continue to podcast to any and all survivors. Be warned, point-and-click adventures have risen again and are walking the Earth. This is the first of two announcements to help you resolve what has happened and what Telltale Games’ The Walking Dead: Season One means for the future of videogames. Herein lie the classified details of Episodes One and Two as told by Tony, Josh, Sean and James.

Track 2: Alive Inside by Jared Emerson-Johnson

Wow, so how many parts of this are we going to get if the whole recording was 4+ hours? When will they be released?

I did encounter bugs in my playthrough, but they weren't major. There were a few bits where audio or animations stuttered and the frames tanked for a few seconds, but apart from that I didn't get anything.

I never felt like the story didn't mirror my choices, except at one part. At the end of Episode 4 where everyone decides whether they want to stick with you or not, Kenny turned against me and said I wasn't there for him when it really mattered. I thought I had played things in the complete opposite way. I didn't blindly agree with him all the time, but I always backed him up when it did matter (mostly). But I didn't really like Kenny in that episode anyway. I really liked him in all the other episodes, but in that one he was being a real arse. Stuff was just getting too much for him I guess, so I understand it. Ben turned on me at that point too, but I can kind of understand that as well. I liked Ben, but my dialogue choices with him weren't the best. When Lee spoke out the line I had chosen, it had a different tone to what I wanted to say, but I didn't feel too cheated by it. I understand why Lee would have said those things like that.

I've had a lot of thoughts recently on what defines a game too. My thinking is more restrictive than what other people seem to think, but I'm definitely against the idea that something not being a game is a negative. It's just a word to describe what something is, but it doesn't indicate the quality of the experience at all. I think people in general need to be more discriminating in what we call a "game", but to do that we also need to recognise that we can also have other types of interactive media that aren't games, but are equally valid, enjoyable, and meaningful. We just need to come up with a proper description of them. People are too hung up on this idea that when someone really doesn't like a certain piece of media, they say it's not worthy of being called that. Like a certain musical genre isn't music, or whatever. Although in cases like that when someone says those things it's because they hate something so much they want it to be as disassociated with what they like as much as possible. There's no actual logic behind it, it's just hate. But saying something isn't part of a certain medium shouldn't be hateful. People need to recognise when they're saying that out of hate, and stop doing that, so that when we do say it we know it's because we're actually trying to define something properly, not demote it.

I tried to saved Shawn over Duck, and for similar reason that were mentioned. In the moment I felt like Shaun needed my help more, and that I could either save both or Kenny would come to help. Also I figured Shawn would be more useful to the group. He looked capable, while Duck is just a helpless kid. In retrospect I also think I should have gone for Duck, regardless of who would have died or not. Kenny didn't seem to hate me too much for it though, but I guess that's part of the reason why he turned on me later.

I didn't know Duck hadn't been bitten at the point where you get to the Pharmacy. I wasn't sure. I also wasn't aware of how zombies worked in the franchise at that point either.

I hated Larry though. Lilly was a bit of a bitch too, but more sympathetic than Larry. He was just an angry old arse. I gave Lilly more leeway, but I was still always very much on Kenny's side.

I didn't have much trouble with the puzzles of this part though. The stealth section at the motel had me scratching my head a bit, but I didn't feel like it was badly designs or not well communicated. I did think it was kind of strange that the spark plug was considered the "quiet" way to break a window though. I guess it's quieter than a gunshot, but it's still pretty loud. No doubt it would draw attention. I didn't have any problem with the bit outside the pharmacy at all though. In fact I thought that was kind of clever.

I gave the girl the gun. At that point I still wasn't aware of how zombies worked, and I thought of it like euthanasia too. It was better for her to just end it than suffer. That was the sympathetic thing to do.

I also had the feeling about killing Lee's brother was more about Lee than his brother. I agree that the actual act of doing it wasn't that moving because I didn't know Lee's brother, but seeing what Lee was going through himself was what made that scene powerful. Not losing someone, but seeing what it meant for Lee himself. Made me more attached to him.
Top

Thought I was pretty much done with forums (mainly time restraints) but had to jump on here and offer a huge thank you to all involved in THE WALKING DEAD podcasts.

I started listening to this show having recently returned to S1 Ep1 but followed Tony's sage advice and stopped the podcast - I then played through the entirety of S1 including 400 Days in the space of about three sittings. I was completely absorbed and having now listened to this part of the podcast my appreciation of the game has only been reinforced/further evolved.

Thank you, thank you, thank you chaps. After pretty much a three year period of not playing let alone completing games your podcast has been instrumental in bringing me back to the fold. I'm already hugely looking forward to the second season and also intend to identify uncompleted games from my collection which have corresponding episodes in your podcast catalogue: slowly but surely bringing gaming back as part of my leisure hobbies.

I don't expect to play or finish many games in a year but honestly it has been such a pleasure having the pastime rekindled by your excellent podcast.

Thanks for such lovely words, Count F.
On behalf of everyone involved with Cane and Rinse, you're very welcome!

Please do pass my praise and thanks on to the whole team. I thought the fellas did an exemplary job of conveying the engrossing qualities of THE WALKING DEAD game and articulated why it is such a resonate, largely unique gaming experience.

I'm already trying to plan out what I might play/complete next from my collection using your back catalogue as a guide.

By the way, if it isn't too much of a pain, is there a place on the forum where I can get some guidance on the length/difficulty of games? Hoping to pick say 4 or 5 games from my collection and tackle them in an order beginning from easy/short to hard/long so to speak, lol!

Many thanks and best wishes

I will, although I think everyone on the team pops in here at least from time to time.

Difficulty is a difficult thing to quantify as some gamers are more capable than others, and even between genres different players will have their strengths and weaknesses.

However in terms of game length - which, as it uses average completion times, also incorporates an element of difficulty measurement - we use this very useful site a lot when planning the podcast schedule: http://www.howlongtobeat.com/
Top

Wise words. Thanks for that useful link, I shall take a look and decide a (very loose, casual) schedule for myself.
Top

Have visited that site before, very helpful. Think I'll plump for Costume Quest next

Big thank you guys for this most excellent two part podcast.

The Walking Dead games I never cared for too much when I played them but after recently playing through Fallout: New Vegas and Beyond: Two Souls I have come to realise just how incredible branching narrative in games can be and how well this game (and Season Two) actually pulled it off.

Hearing how each of the C&R team came to their choices and their experiences with the game was very interesting.

Your Walking Dead podcast was like many I have listened to which left me with a much greater appreciation of the game covered. The C&R team are very articulate and this episode was a perfect example. Truly great input from everyone involved.

I do wish Heavy Rain and Beyond had received the same level of treatment from the team as The Walking Dead as the game experiences are very similar yet greatly superior in most areas of their game design and storytelling in my opinion. Also interesting shows however.

Has 400 Days or Season Two been covered? I will have to check.

Again, thank you very much for a great podcast.

Thanks for the kind words Rob

Unfortunately most of the CaR team doesn’t share your high opinion of Quantic Dream’s writing and storytelling, hence the podcasts we’ve made for their games being less full of praise.

I’m not sure how likely a TWD season two (let alone three or four) podcast is, as most of the team either haven’t or aren’t interested in playing further.
Top

I'm quite surprised the team aren't keen on covering the later seasons. The general opinion seems to be that the first season was much stronger than the later ones so maybe they feel this way too.