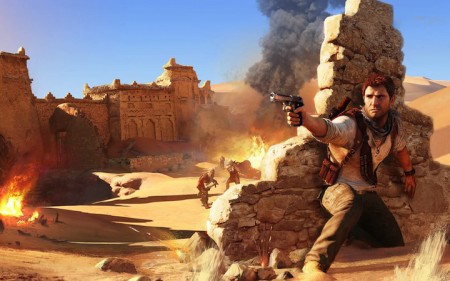 “…be careful what you wish for. It might just get you.”

To coincide with the release of The Last of Us – and to conclude our Uncharted trilogy of podcasts – we return to 2011 and Uncharted 3: Drake’s Deception. Was it all we’d hoped for and more? Leon, Tony, Jay and Sean also take a little look at Nate’s Vita gaiden, Golden Abyss and hear from our brilliant correspondents.

I kind of wish I had been on this show. I assumed that the things I had to say about the game were going to be said, and was surprised when that wasn't the case. I had the opposite journey to Jay with Uncharted 3. I went from loving it, to considering it one of my biggest disappointments. I've played the game 5 times now, and with every play through, I respect it less and less. For me, Uncharted 3 is a bunch of great ideas that could have made a great whole, but were lazily and half-heartedly stuck together. I wish Tony had expanded I what he was saying about the "glue" of the experience, because I absolutely agree with what he was getting at. Jay said the characters were the glue for him, but I think Tony was referring to structural glue, the thing that lets a film or a game hang together. Great characters don't provide structural integrity, a well thought out narrative does, and I don't think Uncharted 3 has that.

One of the reasons I love Uncharted 2 so much, is that everything (except the final boss) felt absolutely necessary to the whole. Each set piece, each character moment, each tiny bit of puzzle solving flowed seamlessly from one moment to another. It's part of the reason that game has such a great feeling of forward momentum, and that players are compelled to finish it in one or two sittings. Uncharted 3 feels like a disjointed series of great "individual" moments, that don't flow together seamlessly. As spectacular as that ship set piece is, it serves no narrative purpose, which was brought up in the forum comments. In fact, that whole section of the game could be chopped out of the experience entirely, with out any negative impact on the overall plot. To me, it felt like the only reason that set piece was still in the game, was that the game designers had worked so hard on it, they couldn't bare to be parted from it. Well, I'm sorry, but great movies and great games are the way they are not only because of what's on screen, but what has been left on the cutting room floor. There are actually whole characters that have been messily stuck onto this game also, but I fear that I'm waffling on far too long here.

In summary, I think Uncharted 3 is a game with great ambitions, but I don't think it executes them very well.
Top

Just listened to this on the sly at work. Good episode, as always. Haha sorry Jay! I didn't mean to totally dismiss your opinion on the game!

I'm up for a replay though. On easy.
Top

I get what you're saying Josh and I agree with your comments about UC2 having a far better narrative structure to it overall. The opening sequence for a start was by far superior to the way the third game began. However, that doesn't detract from the fact that I simply enjoy playing Uncharted 3 more than I did the second game, which is certainly one of the reasons why I prefer 3 over 2. You're absolutely right that the entire boat yard/ship sequence could have been removed (which is a shame, since it wouldn't have taken much to give it a greater sense of purpose within the story) but I just get a kick out of playing that chapter for all its technical razzmatazz, more so than I ever did with either the train or tank sequences in Among Thieves.


Alex79uk wrote:Just listened to this on the sly at work. Good episode, as always. Haha sorry Jay! I didn't mean to totally dismiss your opinion on the game!

I'm up for a replay though. On easy.

No worries, I'd be keen to hear whether your opinion changes or not if you do.
Top

I've only just completed Uncharted 3 so I've had the podcast saved up for a while. I found it interesting that you all seemed to agree that Uncharted 3 had an interesting villain. For me Katherine Marlowe was a big disappointment; I'd hoped that moving away from the muscled heavies of Uncharted 1 and 2 would mean a more intelligent villain, but Marlowe is so under-utilised that I lost interest in her long before the end of the game.

The best villains of any story tend to be ones that challenge some facet of the protagonist's character, forcing them to overcome (or not) a particular weakness in themselves. If you look at the Joker in the Dark Knight, at a very basic level he represents the chaos to Bruce Wayne's order, forcing Wayne to confront a number of ideals that he holds sacred (no killing, whether he is right to work outside of the law). Without being too spoilery, the Boss' actions in Metal Gear Solid 3 are what force Snake to confront what it means to be a soldier, and whether he is able to face up to that responsibility.

In Uncharted 3 it's arguable that the biggest villain is Drake himself. While there is a loose impetus (get the treasure before the bad guys do) the real driving force throughout the game is Drake's obsession; look at the impact it has on his close relationships. I hoped at the start of the game that an interesting triangle would develop, between Nate, his 'father' Sully and 'mother' Marlowe. But Marlowe's relationship to Sully and Nate was never expanded upon, so in the end it just fell flat.
Top

Aye, fair points well made. I suppose I thought she had potential at least which was more than could be said for her predecessors to my mind, but I would agree that potential wasn't realised. A pity.
Top

Well, actually, yes I did! Played it again this week, finished last night, and had an absolute blast. I listened back to the podcast and my comments were really quite silly in hindsight! It's certainly not an objectively bad game

No I really enjoyed it. The story was very good, and whilst I still think there are a few pacing issues it's a really solid game.
Top
Post Reply
7 posts • Page 1 of 1