This is where you can deliberate anything relating to videogames - past, present and future.
Post Reply
10110 posts

Evoland for a bit, and now Evoland 2, which apparently is more awesome.

I got an Ipega Bluetooth controller and searched for games that are compatible with the controller. In most top ten lists Evoland came pretty high.

It's a game for old school gamers and while you upgrade your character in rpg style you also upgrade the game, From 8-bit Zelda/FF game to HD, Control, Graphics and music all upgrade taking you on a trip down gaming memory lane.

Back from holiday a few days ago and not sure what to start next. Aside from loads more Virtua Racer, getting to grips with Donkey Kong 3, and having the game of my life on Mighty Bomb Jack - which I ended up finishing - I decided to play through the stack of Switch demos that appeared recently...

Ape Out
I’d heard great things but that awful jazz soundtrack was doing my head in by the third level. Seems like fun if you can put up with that kind of thing though.

Oninaki
I’m never going to spend forty quid on this, but seems like a very slick action RPG and the demo is definitely worth a download.

The Tower of Beatrice
I have no idea what this was all about! Possibly a point-and-click with some very clumsy pointing. It was very quickly obvious there was no need for me to confirm this though!

Songbird Symphony
Strange rhythm platformer that reminded me a bit of New Zealand Story and a bit of Parappa the Rapper. Another one that’s worth a go on the demo but I’ll never pay money for.

God Eater 3
Job done by this demo. I’m pretty much sold, as long as the full game works solo and not co-op. Seems like a more accessible Monster Hunter, looks good and plays good.

Lethal League Blaze
Futuristic bat and ball fighting game that should be far more fun than it is. I’ll wait for Windjammers 2.

Kill la Kill The Game - IF
After 20 minutes of several very Japanese, unskippable cut-scenes, you eventually reach a very stylish - if a little shallow - pervy fighting game that I enjoyed when I got there, but will never ever touch again with so much anime crap around it.

Dragon Quest Builders 2
This is a great demo - it knows exactly how much you need for free to hook you. Really polished, really addictive, and a lot more than Minecraft with quests. Definitely sold on this one at some point, if and when the price justifies.

Tiny Metal: Full Metal Rumble
Very slick Advance Wars clone that seems to get very challenging very quickly. I’ve still not touched Wargroove, but will definitely add this to my wish list for the future.

Wolfenstein: Youngblood
Despite my very long history with Wolfenstein, the last two games didn’t do much for me, and I had no plans to play this, especially with its co-op leanings. Which is fortunate because after a 20GB download and the hassle of signing in to a Bethesda account, I was told I needed an invite from my “buddy” (don’t get me started) who owns the Buddy Pass, whatever that is. We had fun, BJ, but we’re done.
Top

Hah, Evoland looks like it has an interesting hook, I had no idea. I imagine I saw one of the 'earlier' screenshots and dismissed it.

I have been playing a multiplayer game of Field of Glory: Empires since Sunday. The big issue here is that I get totally wrapped up in it - there is a three day time limit for everyone to get in their turn, and it's been working out at >1 turn per day - but I'm always waiting for the turn to tick over, figuring out what I should do on my turn, anticipating scenarios, searching for people's experiences of playing my faction, and all kinds of extraneous stuff. I also find it very hard to concentrate on anything else, so playing other games seems to be out, at least in this honeymoon period. I had the same issue when I joined a structured Madden community - couldn't focus on anything else but getting better at Madden for weeks.

I need to pick another game to play while this is going on. I've also gone from having no backlog to having a massive backlog this summer.
Top

I'm suddenly beginning to remember, why Doom 3 gets a bit forgettable.

It's an awful lot of the same enemies, in same environments, with the same weapons.

But, it's still cool.

After clearing Minish Cap from my immediate list of classic games I want to play, this morning, as the wife is off to Tesco with the Ferret, as its a rainy Sunday morning, I'm cracking on with another classic game I've missed out on.

So, I'm firing up the PVM, re-calibrating it to full on RGB and busting out this bad boy !! 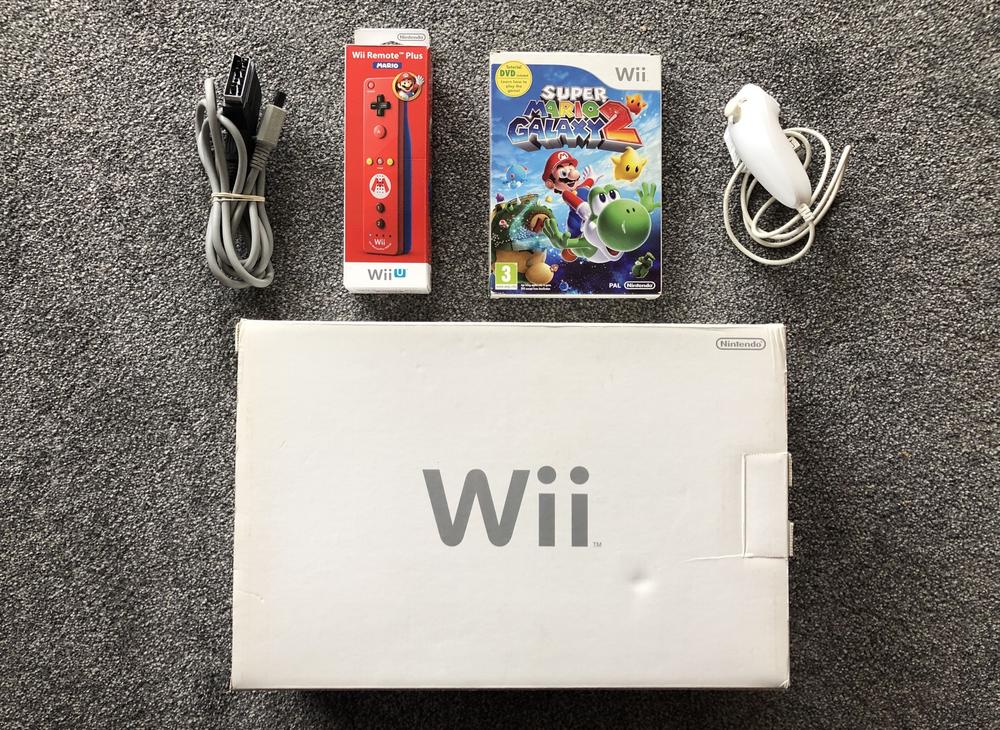 This is adorable.
Top

Flabyo wrote: ↑July 28th, 2019, 11:07 am Suit’s photography style does have all the hallmarks of someone who spends a lot of time looking at eBay

It's hard to capture properly, but you can really get a Wii to look Godly on a PVM with just a few tweaks. 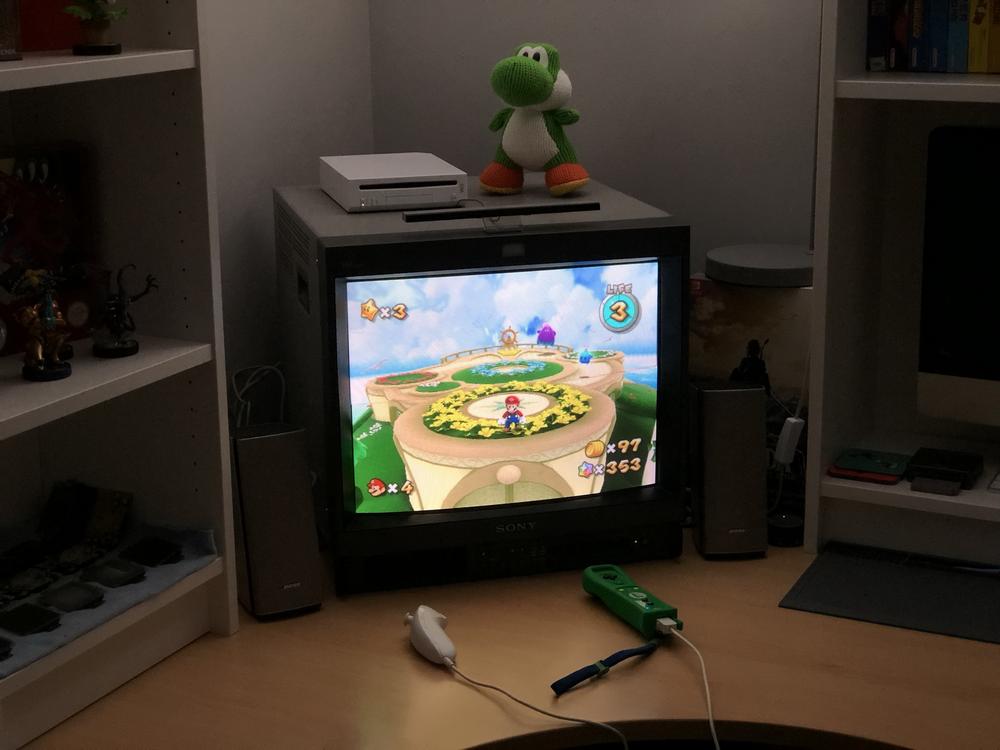 Sacrilegious use of the Luigi wiimote, though.

I played this for eight hours today, just got to World 4.

I can see why people say they prefer this to Odyssey.
Top

Nice one Suits. I fired up Mario Galaxy 1 myself recently and after many times previously actually started to enjoy it - the controls being the primary issue for me previously. I'll be going back!
Top

hazeredmist wrote: ↑July 28th, 2019, 10:14 pm Nice one Suits. I fired up Mario Galaxy 1 myself recently and after many times previously actually started to enjoy it - the controls being the primary issue for me previously. I'll be going back!

Man, it’s precisely the controls that keeps nagging me to play it !!

Well, that and the incredible level design.
Top

I haven't taken the time to try Galaxy 2 myself yet, but the first Galaxy is an absolute masterpiece. The incredibly smooth controls, the hugely creative bite-size stages, the music and the aesthetics are all screaming "FUN!". I'm sure the sequel is on a similar level of quality.
Top

Played the opening level/case of The Sinking City and got some Eternal Darkness vibes from it.

It is a bit rough around the edges but so far it has my curiosity and attention, so much so I forgot about another weekend of Gears 5 Beta.
Top

I came across something called Pixel Puzzle Collection for iOS by Konami in Retro Gamer mag last week. I’d never worked out what picross games were all about, but the fact that this went back through their history grabbed my interest. It’s completely free with some very unobtrusive ads for recent anniversary collections, PES, etc. when you compete a puzzle, of which there are hundreds from simple to serious time-sink “bosses” that all reference every game of theirs that you can think of and more. I’m now completely obsessed and I must have played at least 5 hours on my iPad this weekend, and I’m only 10% through! If you like picross or retro gaming or both, do it!

On top of that, now I’m an expert I downloaded every picross demo I’d previously ignored on Switch and spent about the same amount of time on those. It’s great when you find something new like that at my age!

I’ve really got into Buggy Boy on the C64 too. Not sure why I decided to fire that up when I was playing with my Mini yesterday, but I’d never really given it a chance before. Give it a proper chance and there’s a great piece of racing game history there.
Top

It’s all I can think about playing at the moment.

It’s getting tricky now, just reached the Bowser castle on World 4 but I need to go back and locate more stars for it to unlock - which is daunting

Really great to see you enjoying it. One of the best games I've ever played, easily. My Wii is a bit knackered but I'm tempted to fire it back up just for a Galaxy replay, and Excite Truck, and MPT and...and...and so on. I bloody love the Wii.
Top

Stanshall wrote: ↑July 30th, 2019, 9:00 am Really great to see you enjoying it. One of the best games I've ever played, easily. My Wii is a bit knackered but I'm tempted to fire it back up just for a Galaxy replay, and Excite Truck, and MPT and...and...and so on. I bloody love the Wii.

Also the peripheral, is simply compelling.

I wouldn’t say I was ever put off by the controller but it was always a consideration of mine when considering games and how you’d play them. I always went for the traditional controller.

Also at the time of the Wii, I was also heavily into the Xbox 360 and its HD gaming, which I played exclusively.

Galaxy 2 is truly wonderful, just brimming with creativity and fun. Along with the original, absolutely worth getting a Wii for.

Still plugging away at Yakuza 0, just going around the district is a real delight. So far, I had to put up with a diva of a director for a shoot, help a hardcore punk band live up to their image, play Space Harrier, grab toys with the claw in an arcade and race slot cars! This is such a refreshing way to design an open world, keep the area compact and small and just fill it to the brim with stuff to do. I have been so distracted with everything that I keep putting off the main story. Not to knock the main missions, the side stuff is just that good! After the horrible slog that was Gravity Rush 2, this has been an exquisite palette cleanser.

Also Space Harrier looks phenomenal for an 1985 game. Arcades were crazy ahead of consoles in terms of visual power back in those days, eh?
Top

Walking onto the Palace Pier and seeing two pedestal-mounted Space Harrier cabs in full hydraulic flow was one of the all-time jaw-dropping moments for me.

In terms of how the Home machines of the time handled it, well...

Galaxy 1 remains one of my absolute favourite games ever, and though I didn’t love Galaxy 2 quite as much, I think it’s still absolutely stellar.
Top
Post Reply
10110 posts