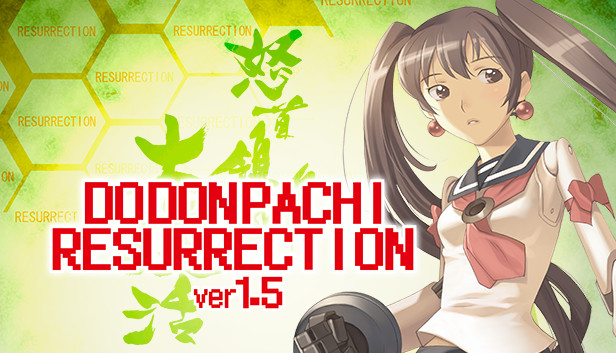 Okay, so we're going to be playing DoDonPachi Resurrection (on Xbox 360 & PC), and focusing on
Normal 1.5 Score Attack mode for now. Not to be confused with Normal 1.51!

Ship and shot style is completely up to you. Whatever you feel most comfortable with! There are important differences between them all, so feel free to experiment and choose carefully!

You can find explanations of the various mechanics here and more advanced strategies here, for example.


The tournament is currently planned to go until (and including) the 30th of September, although I'm sure that can be extended if necessary.

I don't think we should demand any hard evidence of scores, the honor system should be good enough for our community. But screenshots and videos are more than welcome! And for those playing on emulator: Please don't cheat. No save sates or other external features.

Don't forget to post your score whenever you feel like you've crossed a threshold! I'll try to update this post with everybody's highscores as soon as possible. Needless to say, everybody else is graciously invited to join in!

Good luck everyone, have fun!
Top

Thanks for setting this up and for the links. Very interesting to see that my constant hypering is a terrible strategy, unlike in DOJ because it sends the rank soaring and diminishes the effects of the hyper. I'll try again tomorrow or this weekend without using it so much. Interesting stuff. Looking forward to this one!
Top

Nice one Ksub! I look forward to playing this proprerly. Although I already see the wooden spoon in my sights.

just casually getting 1cc's. Ain't no thang. I may reduce your scores by say 5m to give myself a chance in my head.
Top

Great stuff, I'll be putting in some work soon. Don't expect anything remotely stellar from me, but it will be fun.
Top

The hypers working almost the opposite way to DOJ is wrecking my head as I'm trying to play both at the same time. I don't want to drop DOJ because I've put a lot of time in so going to just alternate and play this the clippa way.
Top

Power Style might be the one for me here. Seems you can crank that chain combo really high really fast. Got it up to 1500+ by the stage 1 midboss and if I didn't have to do some work, I'd be getting stuck in.

Worth a try if you've been playing solely on Strong Style. Switching your shot type between Normal and BOOST is also a cool feature. You can tap tap your way through the waves on Normal and then BOOST through the bosses.
Top

Yeah, I had a quick go at it yesterday and Power Style seems like an interesting choice. You're limited to the few bombs you can find in terms of your auto-bomb safety net, but it has some cool features to make up for it, especially the fact that the Hyper Gauge increases much faster than in the other styles.

Strong Style certainly has higher firepower and might be better for survival overall, but its Hyper Gauge is next to useless, so I think there's a fair trade-off there.

That GameFAQs guide is really comprehensive, but man, so many mechanics to keep track of! I can barely keep up with everything.

PS: It's also worth mentioning that the different ships have different combo attributes.
Top

I didn't know the ships also affected combo ability, that's why interesting. Seems like plenty of potential here for a range of approaches going for the same end.

I reckon I'll end up with a half decent score on the first couple of stages and never clear the game!
Top

I didn't know either! According to the FAQs:

Type B: Medium movement speed. The shot spreads slightly and turns left or right when you move horizontally. All-around balanced; it's the jack of all trades, master of none.

Would there be any objection to me playing 1.5 Novice? It might help me out a bit if I can actually get through a stage before the "Continue?" message comes up. I imagine scoring potential is overall lower, but let's face it I won't be troubling you whatever mode I play, I just want to have fun joining in

clippa wrote: ↑August 30th, 2019, 3:10 pm I did try power mode the other night when owly was talking about experimenting with the different styles. It was cool and different and unusual and fun, but man, the lack of autobomb. I need it in this game. I ain't getting far without it.

Clippa, you do have autobomb even in Power Style. You just don't have any default bomb stock so you simply have to manually find a bomb item before you can make use of it. According to the FAQs linked above:


You start with 0 bombs and have 1 bomb slot. You do not gain bomb slots nor do you get a refill upon dying. You can't manually bomb.

In all styles, if you get hit with at least one bomb in stock, you automatically release a bomb instead of dying, although this is not the same as a manual bomb.

I tell you what - I'll try Normal and see how I get on first... If it seems impossible I'll switch to Novice. I haven't even tried Normal yet to be fair.
Top

It's not that hard to actually stay alive, it's just scoring the high points that seems tricky.
Top

Right OK, I might as well open the bidding with my pitiful first proper attempt at beating the game. I think I got to stage 3 maybe? My score on one credit was 101'519'85.

(I realise its silly posting that score, just thought I'd share my first effort so I can see if I improve!)
Top

Hang on, how did you do all those different shots in that video, Clippa? You had blue bullets and green ones! I only seem to be able to do normal shot and focused beam.
Top

Alex79uk wrote: ↑August 30th, 2019, 8:08 pm Hang on, how did you do all those different shots in that video, Clippa? You had blue bullets and green ones! I only seem to be able to do normal shot and focused beam.

There's a Hyper gauge in the top left corner of the screen (the horizontal bar). When it's full you can activate a more powerful shot by way of its dedicated button called the Hyper Counter with its own bullet-cancelling properties. How often you can use it depends mostly on the Shot Style you select at the beginning (after your ship).
Top

I'm having trouble understanding some of the intricacies of the combo system, to be honest. I've tried using my Hyper both as much and as little as possible, and I only seem able to reach the stage 1 mid-boss with a combo chain of around 500 (using Power Style).

Would you mind elaborating on how exactly you're reaching such high numbers? I could really use a few concise pointers and I'm getting lost with the page-long strategy guide. Your DOJ advice helped for keeping my chain alive, but I think I'm missing something when it comes to raising it to such an extent...

KSubzero1000 wrote: ↑August 30th, 2019, 9:00 pm I'm having trouble understanding some of the intricacies of the combo system, to be honest...Would you mind elaborating on how exactly you're reaching such high numbers?

Yeah, of course. I'm nowhere near understanding its nuances and it's very different to DOJ but I think I'm getting the hang of certain elements.

I think the key to getting the combo up as high as possible as quickly as possible is to use your hyper to cancel bullets without destroying the large enemies. The last point is the difficult part. If you can get a quick hyper and keep those big tanks on screen and some of the big ships, without blowing them up, you can just hammer the bullets and watch your combo soar. I usually grab the first bee (on the right, roughly in line with the first two medium sized ships) and immediately trigger the hyper as it fills my meter.

For context, this is my best stage one score this evening, including splits for each section: 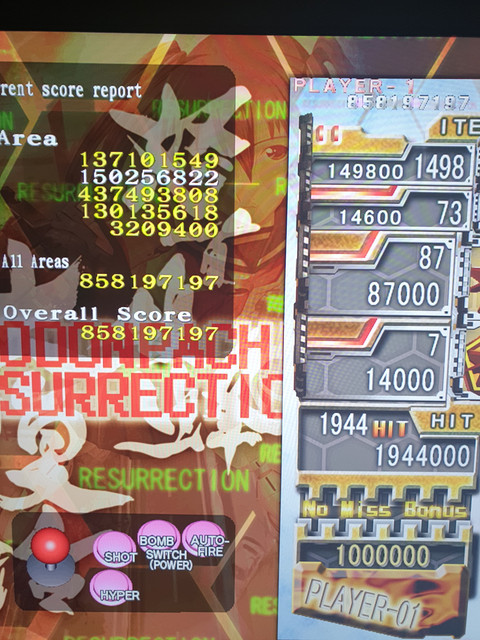 I think I got it to around 1350 for the midboss here but I did manage a full chain of stage one hence the 1944 combo bonus. It's much more forgiving than DOJ in that respect and unlocking the bees seems largely unnecessary for scoring. I may have missed something massive, of course, but I'm not worrying about the bees here for the moment.

I think the time I got 1500 combo by the midboss, I must have been very lucky to not destroy any of the larger enemies and so I cancelled more bullets, simple as that. That makes me pretty confident that a 2000+ combo is probably a fair effort for stage one if you only use one hyper. Had I hypered again, it would have been a lot more. (I've just seen that in the STG Weekly vid, Errpo uses a second hyper at the midboss and then another at the end of stage boss and his combo is over 4000! Otherwise, trying not to look at other vids, was just curious.)

The other bastard element is that when you cancel loads of bullets, you'll see these swinging DANGER lasers appear and they will force you to move and adapt and perhaps briefly stop cancelling bullets.

What a great game, man. Really enjoying trying to figure out something new!
Top

Okay, so I'll try using the Hyper early on in the stage and farm the bigger enemies for as many bullets as possible for as long as I can keep them on screen. Thanks.

(I realise its silly posting that score, just thought I'd share my first effort so I can see if I improve!)

Thanks for kicking the saloon doors open, mate. After all the talk and twitching, we finally got a shootout!

I'd recommend giving Power Style a go, too. I found it was taking me ages to get a hyper in Strong Style.