This is where you can deliberate anything relating to videogames - past, present and future.
Post Reply
16 posts • Page 1 of 1 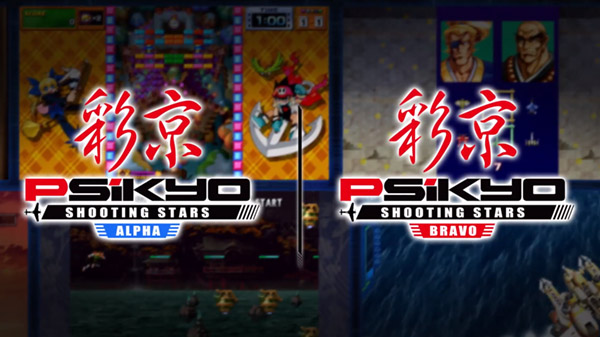 With the Psikyo Shooting Stars Alpha collection recently released and with Bravo due next week, I thought it would be worth a thread about these generally well-regarded but sometimes-maligned shooting games from the Psikyo stable.

They've been chronologically drip-fed onto the Switch eShop over the last three years and now finally compiled into two separate, summative releases. As the Psikyo games have largely improved with each release (exceptions to be noted below), this has been a pretty savvy way to make sure that each game has been given its moment in the consumerist sun and so the compilations are both a handy way of introducing newcomers to the catalogue, as well as a sturdy middle finger to those of us who have slavishly purchased each previous release on day one. And as we have already outed ourselves as fools, par consequent have we bought the new collection, not least because its logo is far less ghastly than the individual releases have tended to be, with 'FOR NINTENDO SWITCH' emblazoned across their artwork with a clip art drop shadow.

Aesthetic peccadilloes aside, the games themselves have been good value and consistently very enjoyable, with a small number of titles approaching the upper tiers.

The Strikers 1945 games are perhaps the most well-known releases, with the second game (Strikers 1945 II) generally held up as a fine example of the genre. It's a Top 50 entry on the Shmups forum annual survey. Strikers 1999, its sequel, is also a fan favourite. They're military shooters, through and through, with fast bullets, loads of power ups and bombs and plenty of medals to collect and giant robots to destroy, once they've emerged from trains, boats and the like.

Beyond this series, Gunbird and especially its sequel (Gunbird 2!) are also popular, with both games having had previous home console releases in the early 2000s. The games have an interesting fantasy steampunk aesthetic and charming low-rent anime characters which help them to stand out slightly in the genre. The slightly annoying but ultimately endearing yells of 'POOOWWWAAAHHH AAAAPPPPP' also add a little more personality and help elevate them beyond the Strikers games, in my eyes. Mechanically, they're virtually identical.

The Samurai Aces games are slightly more disparate, with the first in the series a vertical shooter very similar to the above with a mecha Sengoku palette swap. The second and last games, Tengai and Sengoku Cannon, make the switch to the horizontal plane and while I've not played the less-well-regarded final entry yet, Tengai is easily one of my favourite Psikyo titles. The familiar formula translates perfectly to a hori and it might be the most impressive looking game they put out.

Best of all, though, in my opinion, is Dragon Blaze. It feels like the most complex and deep evolution of the Psikyo vertically scrolling shmup. As well as the usual charge shot and smart bomb options, you can also send your flying dragon up the screen like a battering ram or a fixed 'option' to point blank bosses or larger enemies. You can then split your fire across two points on the screen before summoning your steed back to you when you want to concentrate your attacks again. It's a really fun mechanic that feels more satisfying than anything else they've made.

Aside from the usual scrolling shmup stuff, there are also a few anomalies in the collections. Zero Gunner 2- is a slightly wonky port of the old, beloved Dreamcast release. It has an unusual control method, whereby you rotate the ship almost with tank controls which fixes its angle of fire as you then move freely around the screen. It allows for some cool gameplay moments. It also has a neat, anachronistic polygonal style which looks both ugly and charming to me in 2020.

Sol Divide is weirder and rather shit. It's a horizontal shmup mixed with a fantasy melee combat and magic game. It has lots of different systems going on and a Harryhausen approach to monster design and animation, all of which sounds great, but it's not. It's an interesting curio, though.

Gunbarich is a much more successful experiment. It's basically Breakout but with the aesthetics (and characters) of Gunbird and various power ups to make your bat bigger and shoot flames and the like. It's really good fun and very additives. Strikey Sisters came out last year and gained fans by doing something similar but this is much better, tighter, sillier and more arcadey. It's well worth anyone's time, I think.

It must be said that the majority of Psikyo games feel very similar, so these quirky little departures are appreciated. I'd say that these collections are actually the best way to approach the catalogue because you have a couple of diverse palate cleansers to jump into from the main menu. I'd also say that all of the games are tough on Normal difficulty but they have plenty of difficulty and gameplay settings, including the tongue-in-cheek 'Baby' and 'Monkey', which make the games accessible to basically anyone.

A solid recommendation if you like the genre or fancy something arcadey and good value. I'd suggest checking the contents of each collection to see which sounds more up your street but they're both evenly split between great, good and slightly crap titles so again, they know what they're doing.

I hope this has piqued some interest.
Top

Nice rundown. I bought the individual releases (apart from Sol Divide and Zero Gunner 2) as they came out and have played them all quite a lot.
Top

What's everyone's favourite Psikyo game then? I see Tengai mentioned a lot but not here? I don't own any Psikyo games, I may pick one of the standalone releases up sometime.
Top

I was most excited to revisit Strikers '99 with these releases, but I find Dragon Blaze (which I had no real prior experience with) to be easier to approach on the Switch Lite. Gonna tackle that one first.

hazeredmist wrote: ↑February 13th, 2020, 1:39 pm What's everyone's favourite Psikyo game then? I see Tengai mentioned a lot but not here? I don't own any Psikyo games, I may pick one of the standalone releases up sometime.

I'd say Dragon Blaze and Gunbird 2 are my favourites, with Tengai third. I'd suggest trying one of them before going for the collection.


shadowless_kick wrote: ↑February 13th, 2020, 2:42 pm And speaking of Dragon Blaze, some of its stages and enemy designs are very reminiscent of Mushihimesama to me. Like, very reminiscent. Didn't Dragon Blaze come out first, though? Surely I'm not the first to have noticed the similarities...

Yeah, definitely similarities there and Dragon Blaze did come out a few years earlier than Mushihimesama. I actually think Dragon Blaze is a better looking game in terms of the stages and backgrounds. Much richer and more detailed than Mushi, though the latter has far far more spectacular and interesting bullet patterns and a level of intensity DB doesn't come close to. The soundtrack is also one of the greats of the genre.
Top

Is Strikers 99 available on the uk eshop I can’t see it... keen on that and dragon blaze I think.
Top

Is Strikers 99 available on the uk eshop I can’t see it... keen on that and dragon blaze I think.

Japan eShop only at this point but Strikers 1945 II is better, anyway.
Top

Went for Dragon Blaze, based on videos, your write-up Stan and potential for it to be a different experience to other shmups I have. Excited to try it, cheap too.

The sheer wealth of fun available from this genre man. It’s amazing.
Top

Great choice and yeah, cheap as chips for what you're getting there. I tend to play as the skull dragon rider. I won't spoil his name.
Top

Nice. I like the “Golden Axe as a shmup” aesthetic.
Top

I picked up the Asian releases for these in Hong Kong - they are three separate volumes with four games on each cartridge. I prefer this format of six games per cart, but don't have the money to double dip right now, sadly.

Zero Gunner 2 is a lot of fun, as is Gunbarich. I had never really played any of these except 1945 and it was a nice history lesson.

If you're into shmups at all, these are great collections to pick up.
Top

Yeah I can immediately tell I’m not getting the M2 treatment with it, but it’s still decent enough for me with a few options including putting the screen in portrait mode and I’ve got it on handheld. I’ve played a few runs now and I don’t notice anything debilitating, docked with Pro Controller. Compared to say Vasara, a game in which I actually notice lag, it feels decent enough. You’ll definitely get the best experience with a PC and MAME, not doubting that for a second mind. I’m just not the level of player where it really matters and I love the convenience on this format. I could play it on MAME on my Shield, but the screen is smaller and tate games really suffer. With this I’ll be able to use the flip grip in handheld which is nice and get that delicious portrait screen real estate.

Dragon Blaze looks like a Megadrive game, almost a generation or so behind Cave games I’ve played, not that that’s a bad thing. I really like it, lots of fun. Sending the dragon up is a cool mechanic. It’s a shitter when you die and lose your power ups mind, you don’t get them all back. I’m just on the lower difficulty and am likely to stay there, enjoying it so far and pleased to add it to the collection!
Top

Rob’s my boy on this I think.

I just got through 4 stages taking no hits... then I paused it and accidentally hit “return to title”

I am so annoyed

Glad you're enjoying it, mate. It's not top top tier like Cave or whatever but you've probably got the best example of a Psikyo game there. If you bought Gunbird 2, you'd likely be surprised at how similar it feels.

I would say Zero Gunner 2- is worth a try at some stage if you fancy something quite different. I really like that one, too. And as mentioned, Tengai is good stuff. Beyond that, they'll all be less-evolved minor variations on Dragon Blaze.
Top
Post Reply
16 posts • Page 1 of 1