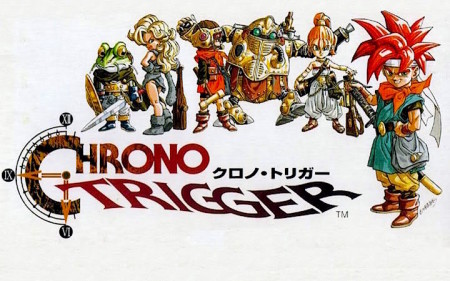 “Did you guys just come out of the closet? Get out of here!”

In 1995 a Square Soft development ‘Dream Team’ launched an epochal RPG for the Super Famicom/SNES. Chrono Trigger has since time-travelled its way to PlayStation, DS and mobiles, but does it retain an ageless charm? Leon, Brian, Josh and returning guest Simon Cole – along with help from our community contributors – bathe in the sumptuous 16-bit atmosphere of this twenty-year-old genre staple.

Cane and Rinse 166 was edited by Jay Taylor.

The DS version has an extra epilogue quest that the other versions don't have. It's not essential, it mainly serves to cover a plot hole in Chrono Cross, but that might affect which version people choose to get.

(Pretty sure you won't do Cross on the podcast, it's very VERY hard to get hold of and not really worth it in my opinion. Buy the soundtrack for it though, it's astounding)
Top

It may not have made the edit but we did talk about the extra bit at the end of the DS version, as well as a line or two on Radical Dreamers.

As I say, I used to own an original US copy of Cross but it's long since been eBayed. It is, as you say, fairly unlikely we'll get around to it but, well, you never know!
Top

I'm only half way through the episode, so it may have been mentioned, but I wish I'd talked about the planned fan-remake in my post. I remember being really excited about it until Square put the kabosh on it.

Picked this up the other week.

This will be my Christmas game while over the in-laws when everyone is snoozing and watching Eastenders.

Always admired from a far, mainly due to the Mystic Quests links but the Podcast reminded me of it and I instantly picked up a copy from Amazon for £20

I'd say you're in for a treat!

Suits wrote:Picked this up the other week.