Here's where you can arrange meet-ups and game nights on the platform of your choice.
Post Reply
133 posts

You've got 3 days to buy a DFK steam key for half price, if you're interested - https://www.humblebundle.com/store/dodo ... surrection

I haven't been in a shmup mood for a while, so I've got no score to submit. We're all groovy, chill cats on here though, I'm assuming it'll be left open, bump the thread 3 years from now with a nice score? It's all cool, daddy-o.
Top

Like I said, don't expect any miracles from me with this game, even though I like it quite a bit. I'm desperately trying to stay alive, you want me to keep any sort of chain combo going?!

We have until the end of the month, right? Though I don't see myself massively improving anytime soon. 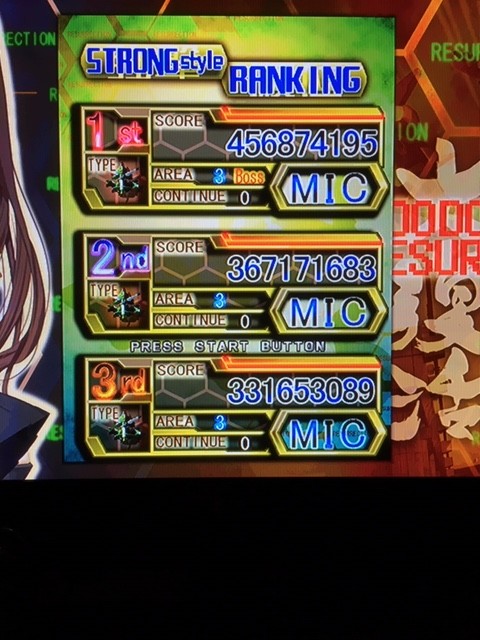 It's not up to me, but yeah, I reckon the end of the month could be the soft deadline, we have the crowning ceremony where you all swear eternal allegiance to the victor, but then it's left open, you're allowed to submit a new score any time you like in the future.

We can start a new competition and then eventually the community forum will have all these lovely high score threads for different games that people can jump into.

Ooh, decided to give greenboy another go and it paid off.
I think I got lucky with the blue ship once so I switched to that. Reet, greenboy all the way for the foreseeable.

Don't think I'll get even close to that, tbh.
Top

Oh you will. If history has taught us anything, you will.
Maybe not today, maybe not tomorrow, I might be long dead before it happens, but it'll happen.
Top

I'm really enjoying playing this at the minute. Finding the repetition really comforting, improvising and trying different approaches.
I'm not playing it the right way, we've had that conversation, I don't know if I'll ever do the whole hyperless chaining thing, that feels really punishing, it's not fun for me, but I'm constantly tweaking and refining and pushing forward to the stage where I might start taking more risks and mixing it up further.
I was the same with spelunky, eventually getting comfortable and confident enough to push myself a bit harder each time after playing for so long.

It's an amazing game. I never truly warmed to it in the past I don't think, it was never my favourite cave game that I'd played, but I love it now.

I felt another bout of gaming fatigue coming on, but it felt more like depression this time, just staring into the distance and not having the list to do anything. I managed to get myself out of that by at least watching some telly and films during my free time, but pushing myself to play this has been really good because I'm in now and I'm enjoying it.

I stopped keeping a log in the what you watching thread as I felt like I wasn't offering anything at all. I could barely muster the concentration to watch any of the damn stuff nevermind come up with some sort of coherent opinion on it's value, but I've been watching mr mercedes lately and that's been great fun. I never really watched any tv shows in the past apart from breaking bad so it's been fun.
It started off as a stephen king trilogy, I started at the second book and didn't realise, that's the sort of daft shit I get up to, so I've read the second two books and seeing the story from the start has been great and I'm towards the end of the second series now and it's been fun seeing the changes and how they approached some of the plot points. Good fun.

I reckon I can beast my score with my current approach, if I stick with the green ship, I might look up some strategies of getting to that funky route tomorrow, instead of just relying on luck, see if I can do that consistently, if I can do that with a decent score and get to the second loop with a few lives spare, I'll be laughing.
Top

I haven't had as much time to dedicate to this game as I would have wanted to lately and I haven't been able to reach my score again. The time pressure is also kinda getting to me, even if only subconsciously.

Love the game and I certainly have a better grasp on its fundamentals than before the tournament, but I sincerely doubt I'll manage to trouble clippa's score before the end of the month.
Top

Pffff, let's just fuck the deadline off. Who needs it?
Life's stressful enough as it is.
We can start a new score competition whenever but none of them ever need end. I like that idea of it just being a free and open thing you can dip into if you fancy.
We might not have picked the best game, in hindsight, it's quite tricky and takes a while to click. We'll keep that in mind for next time.
Top

No, we'll keep the deadline to give everyone some focus and someone will be crowned winner at the end. Probably you unless Stanshall can pull another miracle out of his bag of tricks when he gets back from his space travel excursion.

But I'll probably keep playing this at my own rhythm afterwards. It's a great game and I know for a fact that I haven't reached my skill ceiling yet.
Top

I imagine Stanshall's watching that on a loop during his downtime up the moon, RIGHT up, mind. Slowly but surely drawing his plans against us.

I just can't do it in strong mode, I'm too shit, but I seem to get into the route on the 3rd stage by accident half the time I play now. I'll look into how you do that.


*Note: IF you miss getting onto the Ura path in the first stage, then you can re-enter the Ura path starting on stage 3 if you collect the 7 bees on each stage in the normal path and not die at all excluding bosses.

I'm back in town but back to zero with this. I had a couple of runs of DOJ and chained stage one on my second go. Felt flipping great. Still locked in. Had a few runs of DFK and it's just not stuck with me at all. Good game but I possibly screwed myself playing so much DOJ immediately before it. It's too similar and I'm not enjoying it nearly as much. I definitely think something totally different next time.
Top

Strong style is the best for survival, but the worst for scoring, it seems. I'll stick to it, because I suck at scoring in this game, so the way I see it is that the longer I stay alive, the more likeli it is I'll put down something even remotely substantial on the board.
Top

This is the way of the clippa. Go forth and realise your full mediocrity.
Top

Ha! This is brilliant. Pretty damn brazen, it's a good job cave aren't as litigious as nintendo

So annoying that I didn't manage to get into the funky route thing on stage 3. Even now that I know how to, sometimes I don't know what I've done wrong, I'm sure I'm getting all the buzzybees. Last 3 game it's been no special route for me.
Top 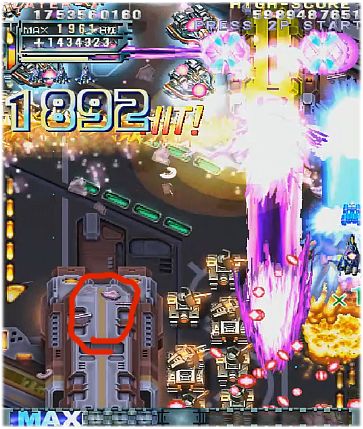 There he is! That's the little bleeder I've been missing on stage 3, when you start going left, just after the big lasers. I must have been getting that bee totally by accident every time I did get it. Actually, I do remember hearing the little noise and wondering what that was about sometimes

Saw it today. Reet, I should be able to get into that route on stage 3 every time now so long as I don't miss any other bees.

I'm getting good at building up my second hyper at the very start of stage 1 in strong mode so I reckon I should be able to get into the route there if I learn which silos to shoot and which not to and in which order - https://shmups.system11.org/viewtopic.php?t=28305
I'll have to sit down one day and just work it out.
I did try once but it seems really finicky, sometimes you think you've done everything right and you haven't. Pain in the arse.
Top

Yeah, I'm not beating that!

Users browsing this forum: No registered users and 5 guests