Leave us feedback and offer us your own submissions.
Post Reply
10 posts • Page 1 of 1 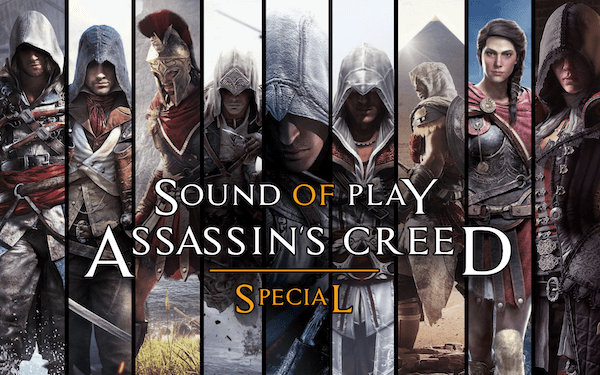 For Sound of Play 240, We're making it a special centered around Ubisoft's historical, stealthy and stabby Assassin's Creed series.

So, if you have any favourite pieces of music from any of the games in the series, feel free to add them to this thread, along with why that particular tune means something to you*

Any submissions will need to be submitted by March 8th, 2020 for possible inclusion in the recording.

*Don't forget, we'll need a YouTube link for the track in question within your post if you want to have the track on the show!

The Parting Glass by Sarah Greene

Arguably the finest entry in the original Assassins Creed series since 2 was Black Flag. The game gave players a chance to relive the golden age of piracy through the life of Edward Kenway. A journey of self-discovery for Kenway awaits as he sacrifices family life for the promise of riches. Along the way, Kenway learns of the value of family nay brotherhood and his once materialistic motives are cast aside as he joins the Order and beings a life of greater purpose. The euphoria of his newfound conviction is tempered as he discovers of his wife's passing and as he waits at shore for the arrival of the daughter he doesn't know, the use of this poignant Celtic anthem 'The Parting Glass' is sung beautifully by Anne Bonny (Sarah Greene) aims to extract every last tear from the player as the credits role. The haunting tone of Sarah's voice is complimented with the stripped back string accompaniment. A song typically sung at wakes or at the end of a gathering to bid farewell, the use of the Parting Glass in Black Flag bids farewell to the old life of Kenway, and ushers in an era of renewal to his and his daughters life and future.
Top

Expect a hefty post from me on this at some point soon, I love this series and it’s music especially. I think it’s one that people have mostly overlooked in terms of audio, they know the main theme from Jesper Kyd but not a lot else.
Top

I find it difficult to find as much time for gaming as I would like these days, but Assassin’s Creed is one franchise with which I have kept in regular touch. I think the central themes of well-researched and -executed historical fiction, and secret societies and shadow histories, have always appealed to me. I like playing these games slowly, looking up the real stories around the locations, events and personalities as I go.

And since gaming is a bit of refuge and distraction for me, I don’t mind sinking a lot of time into collecting items or completing peripheral quests just to tidy the map, though I can certainly understand this tendency towards padding as a source of frustration for some players.

Although I have been a consistent player of the series, I don’ t really specifically remember playing Revelations. However, in my subsequent listens of the series’ soundtracks, this version of the main theme by Lorne Balfe has become a real highlight for me and is now my track zero to begin an AC music session.

This game is set in Haiti, with our protagonist tasked with freeing slaves and recruiting liberated slaves known as Maroons. This song, which serves as the theme for this DLC, is a fantastic take by Olivier Deriviere on Haitian traditional music including Voodoo themes and lyrics mixed with familiar Assassin’s Creed tones.

Playing Freedom Cry on PS Plus, way after I initially played Black Flag, reignited my enthusiasm for that game, and also inspired me to seek a better understanding of Haitian history after I had done the barest minimum many years ago in history in my first year of uni. The game, and especially this wonderfully expressive soundtrack, got me reading CLR James’s The Black Jacobins and about the fascinating, proud, difficult history of the Haitian slave revolution.

I judge many games on their ability to not only draw me into their world, but open up to me a new or deeper experience in my own world. On that count, The Root was marvelously successful.

Rather Death Than Slavery

Many Sounds of Play ago, I recall Jay featuring the main theme to Unity by Chris Tilton, and noting that it, like much AC music, has more a science-fiction vibe than connection with the game’s specific historical setting. Tilton’s rendition is great, but despite being the game’s eponymous track, I rather wonder if it wouldn’t be equally at home anywhere in the AC canon.

On the other hand, I really appreciate Sarah Schachner’s contributions on Volume 2 of the OST, which make much more of the revolutionary French context of the game. For me, it is Schachner’s track Rather Death Than Slavery which better serves as the theme for this installation of the series.

The fading in this track at times does strike me as less nuanced - perhaps even a little on-the-nose - than some of the other tracks in the game and some of her other work, such as in the later game, Origins. But as a story-telling and framing device, I think it does a superb job.
Top

The main theme is a banger - the way it instantly conjures up those roiling seas and salty ports in your mind when you hear it is fantastic. For me it might even beat Hans Zimmer's themes for Pirates of the Caribbean as far as ear-worm piratical scores go. The use of it in the mobile-only Assassin's Creed: Pirates was the most enjoyable part of playing that game, for me.

The Ends of the Earth

Also from Black Flag is 'The Ends of the Earth', where nowadays-Marvel composer (and Marilyn Manson guitarist) Brian Tyler uses guitar and drums for a somber and really evocative piece.

Olivier Derivere's use of traditional Haitian music alongside the more typical orchestral score is a winner. The most memorable one for me is 'United' - the mournful singing can actually choke me up. Part of that is its use in a sequence in the game where Adewale is in pursuit of a French slave ship and its escorts. The game is far from flawless in its communication of the horrors of the Caribbean slave trade, however I think 'United' is well chosen for what might be Freedom Cry's most impactful moment.

Legend of the Eagle Bearer

Choosing The Flight after their excellent work on Horizon Zero Dawn was a smart choice for this game. I listened to 'Legend of the Eagle Bearer' in anticipation ahead of release the way I might listen to a single before an album comes out. I had it on repeat, as a matter of fact. It's still thrilling every time I hear it, even after hearing that little sting from it when complete certain objectives in the game so many times. The bouzouki sounds absolutely amazing, and I have to be honest - it took only the first two seconds of this song to make me want to fire this game up again.

Edit: Spoilered the YouTube videos, as they were taking up a lot of space.
Top

Syndicate was the first AC game set somewhere I actually know quite well, it was fun to explore places in the game that I’ve actually been to. The whole vibe of the game is quite Dickensian so it sort of makes sense that the end credits would get this wonderful piece in a ‘west end musical theatre’ style reminiscent of shows like Oliver!

Composed by Austin Wintory, performed by Tripod, this is ‘Underground’

This is ‘Salvation of Forli’ from AC2, but most people know it better as the piece that plays in the animated short ‘Embers’ that introduced fan favourite character Shao Jun as well as showing us how Ezio reached the end of his path.

There’s a really fantastic soliloquy that plays along with this in the short, the last words of a man who has given everything he has to give but has no regrets, but you’ll just have to go find that for yourselves.

Desmond’s story comes to a close in this game, and for the first time you get several extended sections playing as him where you get to see just what all those years of Animus Bleed Effect does to a person.

I know not everyone liked him, or some of the weirder plot twists in the present day storyline, but he definitely gets his moment to shine.

I assume Ezio’s Family will be in there, it’s effectively became the series de facto theme tune, with versions of it being in almost all of the games. It’s a little like the Imperial March, which everyone immediately associates with Star Wars despite it not being in part 1 at all.

If you’re only going to put one version in, I’d recommend ‘Earth’, which was the title screen music for AC2, it’s quite an unusual version compared to the main game version of it.

Anyway, under the spoiler is the original followed by some of the variants I like the most. Take your pick

Spoiler: show
Ezio’s Family AC2. I love the very slight introduction of electric guitar towards the end, it’s a very Mike Oldfield thing to do.


China‘s soundtrack didn’t soar as I would’ve liked, but it’s a nice rework of the theme anyway...


The Odyssey version might well be my favourite version of them all. I love the sudden change of instrumentation in the middle.

Something a little more out there... this is the main theme from the mobile game Rebellion. It’s set after the movie, and follows the characters from that (yes, the movie is canon, were you not paying attention in AC Origins present day section?)

(I’m trying to find some of the music that was in the multiplayer modes of the various games as well, that doesn’t tend to end up on the soundtrack releases for some reason)
Top
Post Reply
10 posts • Page 1 of 1

Users browsing this forum: No registered users and 0 guests