This is where you can deliberate anything relating to videogames - past, present and future.
Post Reply
823 posts

Also, I strongly, strongly, strongly recommend a product called the 1-Up Card for cleaning carts. It's got the proper abrasive for cleaning contacts (IE, it'll take the crud off but not the gold/copper), and they're stupidly cheap and easy to use. I don't like using Q-Tips because they leave little fibres in the cart. No bueno.

Also, has anyone figured out a method for cleaning grime off cart labels? Specifically, Genesis labels (because they aren't laminated).
Top

What sayeth this forum on clone consoles? I currently have a Retron 5, and I love it to bits, but the flawless fidelity of the Mega SG and Super NT, plus the impending Polymega which hasn't released yet (despite me first learning of it in 2013!)... I dunno what to do.

The Retron 5 is just a ROM dumper, granted, but will I see an improvement with either of the newer options? I know I want a Polymega because of the SCD/Turbo-Duo/Saturn/PS1 support... But at that point, should I not just buy the expansion modules and ditch the Retron?

I'm so utterly conflicted. There's so many options, and none of them are the best option.
Top

clippa wrote: ↑
April 18th, 2019, 9:45 am
Everytime I pealed a sticker off something, a quick wipe with that and it was good as new. Amazing stuff. I used to hate pushing all that goop into a blob with my thumb nail and then trying to smear the rest over the plastic, hoping it would just blend in somehow.

I use this for removing stickers, it’s a natural citrus substance, smells like lemons.

It’s pretty decent, is gentle to use on cardboard surfaces but isn’t too aggressive to remove the really nasty old stuff.

For an example, you can see it did a fairly decent job on Pac-Man, without harming the original box. Sadly the bottom sticker was too cheap and old to remove without taking the box with it.

With anything plastic you can be as liberal as you like with it and it’s very good. 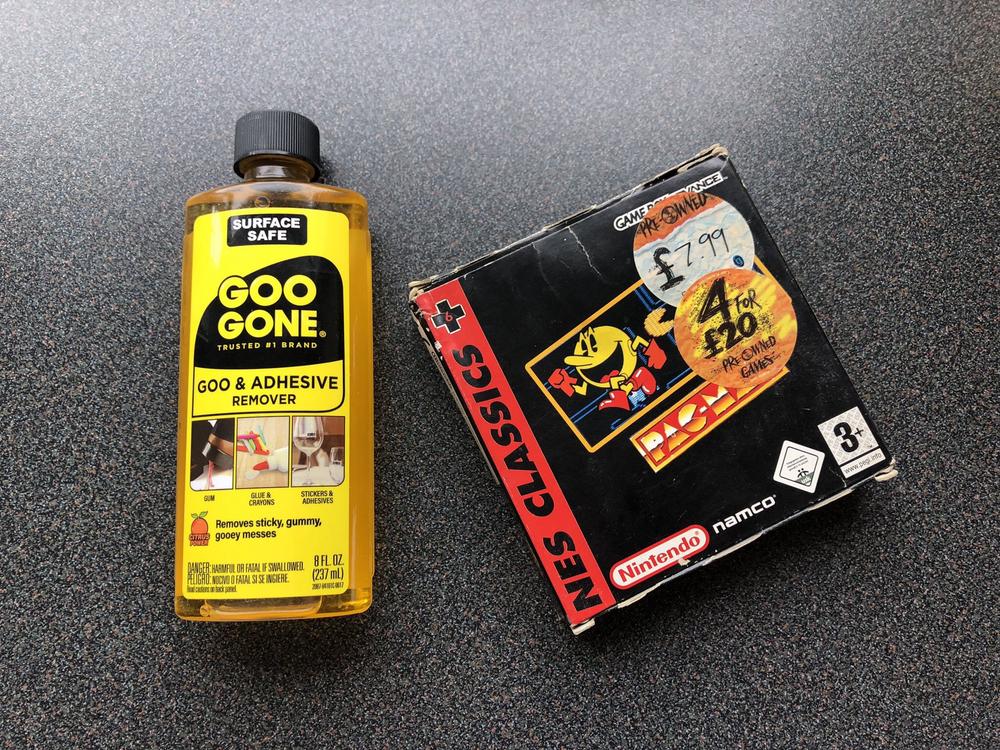 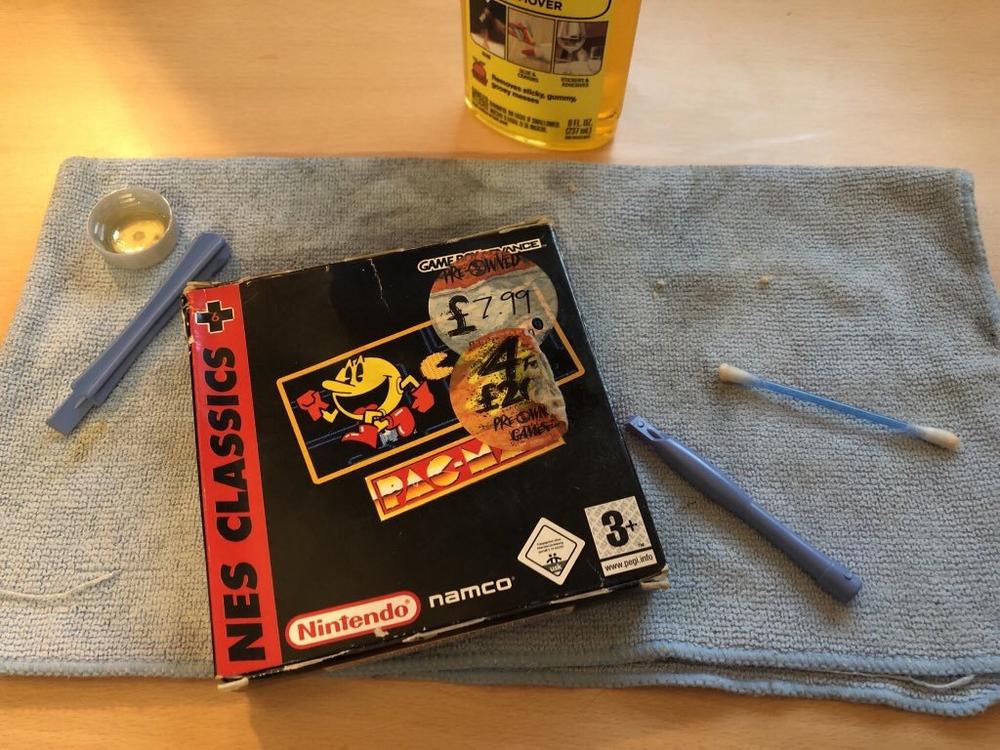 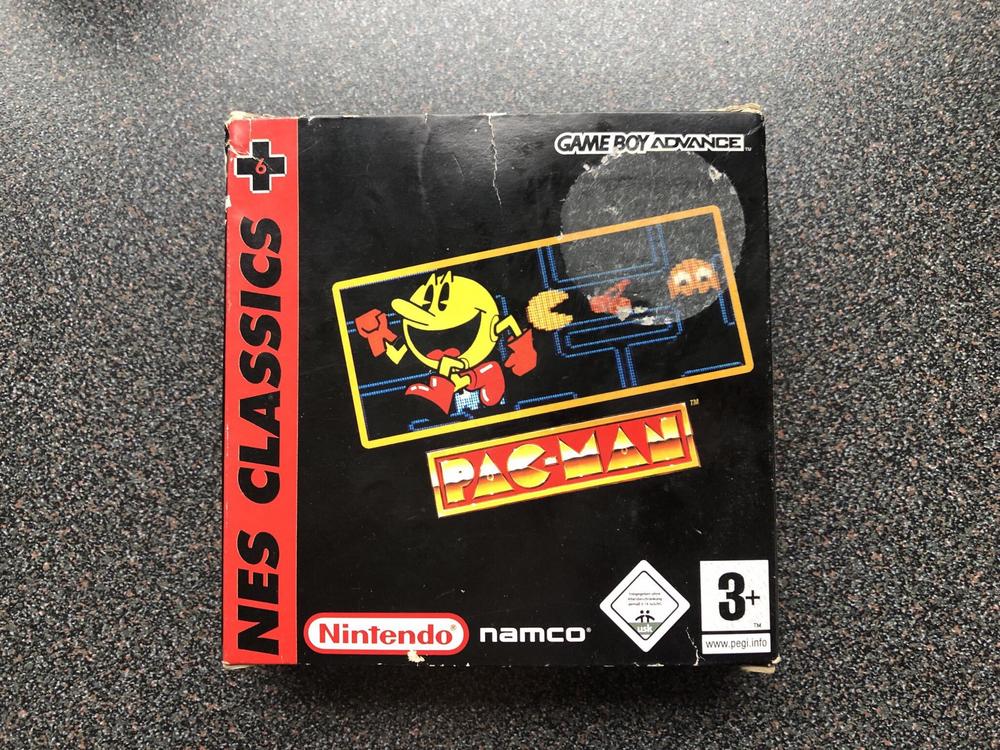 I’ve never had an issue with using Q-Tips, or ‘fibres’ being left in the cart restricting its use or functionality.

Generally, anything left behind by a damp Q-Tip is taken away with a soft cloth wipe.

It’s good to be careful but I honestly think that’s being a little too over cautious.
Top

I’ve never had an issue with using Q-Tips, or ‘fibres’ being left in the cart restricting its use or functionality.

Generally, anything left behind by a damp Q-Tip is taken away with a soft cloth wipe.

It’s good to be careful but I honestly think that’s being a little too over cautious.

It's less about functionality, and more about not liking little fluffs in the corners of my carts... I don't take my carts apart - although now that I think about it, I really should, sometimes you find cool stuff in there (like having some rental store's info sharpied on the board itself). I will say, however, that I own a copy of Shinobi III that had like... Some kind of green growing on the contacts. It wasn't copper corrosion either, it was some kind of like... Algae, I dunno. XD Q-Tip didn't do a damn thing to remove it; 1-Up card did. So I know empirically that the 1-Up Card is just the better option.

I also have one particularly nasty copy of Castlevania Bloodlines that's been shoddily glued together with what looks like wood epoxy... It meant I only paid like $40 compared to the $100 going rate, but still. The game *works* but it deserves a better restoration. Maybe I'll pick up some shite sports games from the Microplay tonight and get on replacing the shell. I do have all the proper repair keys and such.
Top

All this passionate talk of cleaning products has made me feel like I’m missing out. I’ve got a pile of carts which don’t work which I’m going to try and resurrect. I may even take them apart. They are worth nothing unless you’re into Barbie, Dora et al.
Top


Haha I was going to say:

They are worth nothing unless you’re into Barbie, Dora et al........or you’re Nick

Sadly they aren’t on the GameCube otherwise I’d be throwing them north of the river.
Top

Simonsloth wrote: ↑
April 18th, 2019, 4:38 pm
All this passionate talk of cleaning products has made me feel like I’m missing out. I’ve got a pile of carts which don’t work which I’m going to try and resurrect. I may even take them apart. They are worth nothing unless you’re into Barbie, Dora et al.

You could do a few things:
- fix them as practice for restoring good games
- open them just to check for Easter eggs
- bin them (in the ewaste bin)
- send them to obsessive collectors
Top

The EU cart for streets of rage 2 only locks out on a a us ntsc machine, it’ll run if you set it to Japan instead (and boot as Bare Knuckle 2 instead).
Top

Every day's a school day here on C and R.

Never thought to try it, for obvious reasons, but that's a cool little trick.

Got some ROM colour palette colour pixels at the bottom but a bit of jiggery pokery should sort that.

Shame it doesn't t work for 3 - just tried, to be sure 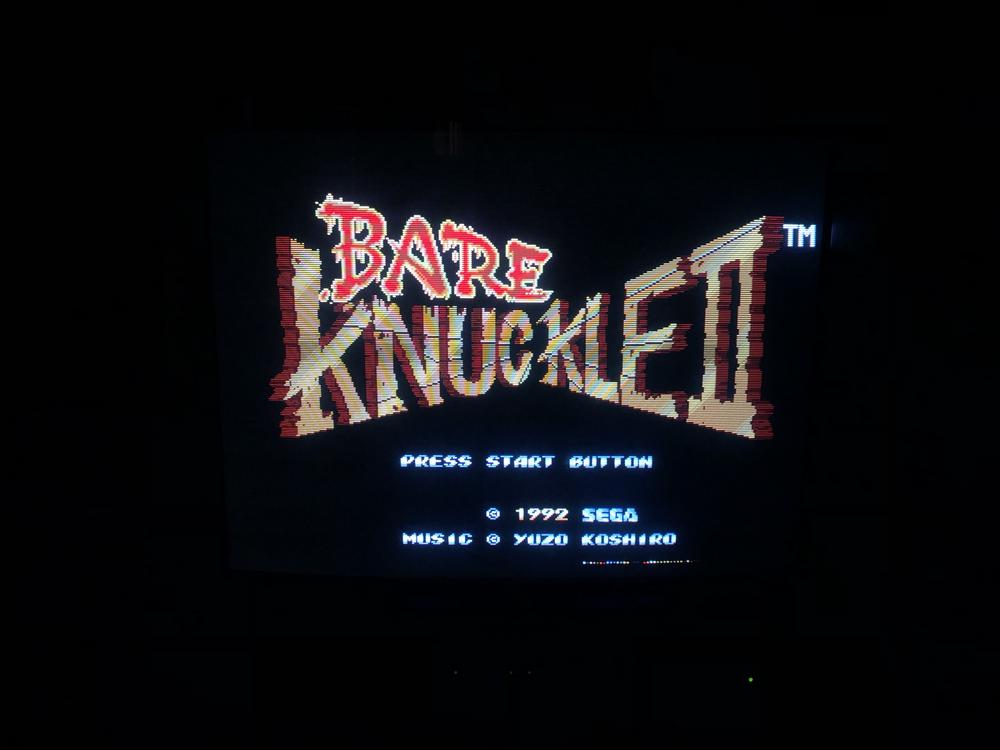 I only know that cause if you put it into the analogue Sg when it’s set to ‘default to ntsc us, but also automatic region lock detection’ it goes for Japanese on that one

I'd replace dr mario with mario golf but that was gameboy colour so you're probably not allowed to do that.
I'll replace it with tetris instead. I didn't play dr mario until the nes version I don't think.
Top

I've been playing Castlevania Aria Of Sorrow this morning. It seems pretty good, although it's kind of basic it's got some nice ideas with using enemy skills for yourself.
Top

It seems like this has been “coming” for a long time but hasn’t materialised yet. They’ve now got a kickstarter with a vague launch window. Thought I’d spread the word and this seemed like the best thread to do that.

I don’t want to keep banging on about this but the Kickstarter is at 99%, the retro asylum podcast keep mentioning it and I just found a list of the games on the service. It also looks pretty incredible. Just in case any of you wanted to help nudge it over the line.

Alex79uk wrote: ↑
April 22nd, 2019, 12:38 pm
I've been playing Castlevania Aria Of Sorrow this morning. It seems pretty good, although it's kind of basic it's got some nice ideas with using enemy skills for yourself.

This was the one Gameboy Advance Castlevania I missed and I was disappointed the anniversary set they're doing didn't include this one.
Top

I had a couple of drinks the other weekend and had 10 minutes to kill while I was waiting on something – so I dipped into eBay and won some Mega Drive games for cheap with some cheeky last second bids. 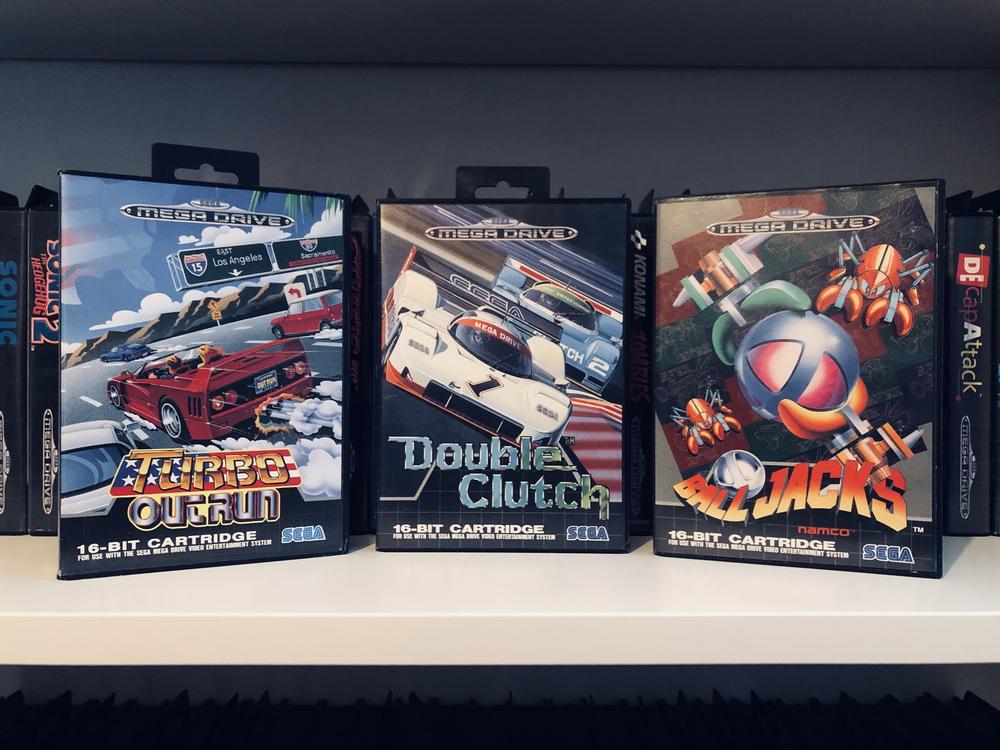 Outrun Turbo
Being the cheapest of the three Outrun Mega Drive games, I can see why. I thought this sucked.

I was quietly optimistic about it at least being fun to a certain degree but there are a number of issues I have with this game.

Firstly, the graphics are bad. The colours are nice and vibrant with some good sunsets and weather effects but the sprites are just badly drawn, with what I can only describe as what appear to be rushed with very little care or attention paid to porting them to the console requirements.

Not even a nicely warmed up Sony PVM could do anything with this. Nasty and cheap.


Double Clutch
Now, I enjoyed this one.

Akin, to Micro Machines, Super Off Road, or even Super Pro-Am R.C. on the GameBoy, this is a top down racer – despite what it’s Le Mans esc cover art with suggest.

It was cool. It was fast, predictable (in terms of car control) and allowed you to earn cash from races and collect powerups during the race that you could use to upgrade your car between races.

There were a number of mildly interesting tracks, that once you knew, you could find some satisfying lines that would propel you ahead of your rivals. There’s also differing weather visuals and hazards like oil and puddles scattered around the circuits.

The only downside maybe was that it was militant in terms of Game Over. It wasn’t hard as such, just very unforgiving where if you finish outside of the top three in any race its an instant Game Over screen ! A simple nudge or tap from another car could put you off line and into a hazard moving you from 3rd to 4th on just before the finish line – Game Over.


Ball Jacks
Man, what is this.

As what I can only describe as a Pong/Windjammers style sports game, you are pitted against an identical robot crab opponent with what seems to be tasked with stealing metal balls from.

I think there is a mechanic as to where you can damage your opponent, but I was unable to work out, how, or what the benefit of doing so was. I was blown up every round.

I didn’t dabble with this for long as it was dull, boring and extremely vague.


After all was said and done, sadly I had more fun cleaning them up whilst listening to the football than I did actually playing them – although notable praise must go to Double Clutch for being the best of a bad bunch, by a long way. That said, you’d just play Micro Machines for this type of fix which overall is better in almost every way **bar the cover art.

Also, worth pointing out that these are some of the better condition games I’ve picked up, most of the boards showed hardly any sign of use and all come with their manuals, only Ball Jacks missing its hanging tab.

Good bit of fun and overall, for what I paid, I’m glad I picked them up.
Top

I love how your retro gaming stories so often involve copious amounts of alcoholic beverages.

KSubzero1000 wrote: ↑
May 2nd, 2019, 9:23 am
I love how your retro gaming stories so often involve copious amounts of alcoholic beverages.

Mate, I was flopped out the back garden, ale in hand, shades on, minted lamb on the BBQ, chilling - HARD.

Boy was loose on the freshly cut lawn playing with trains, wife was relaxed reading her book.

As the sun was going down, I was lagging drunk, buying moody Mega Drive games off eBay for less than what the postage costs.

What a time to be alive.
Top
Post Reply
823 posts