There’s a moment in NaissanceE, the 2014 game by Limasse Five, in which the words “This is not the Way” appear at the top of the screen in front of a hallway. Proceeding down this hallway causes the game to shut down.

There is no cute narration, nor even a ‘soft quit’ to the game’s main menu. It just kills the program entirely. It’s just one opaque moment in an aggressively avant garde piece of art. It’s also a neat little microcosm of the entire experience.

NaissanceE is a world that’s not meant to be inhabited. I remember once going to an evening event at my elementary school. A couple friends and I broke free of the crowd in the gym and ran wildly down the dim halls of the building, free to jump and yell and do all the other things we couldn’t do during the day. Like many childhood experiences, our mania was tinged with fear. We could be dragged back to the gym of course, but more unnerving was the presence of the building itself.

The purpose of the structure was to house hundreds of us for hours a day, to compartmentalize and maintain order with separate rooms and neat lines. Without kids or teachers, the size of the school felt purposeless and unsettling. Why were these hallways so wide? Why were all the doors closed? Why did the bathroom have ten stalls, if there was only one person to use it? 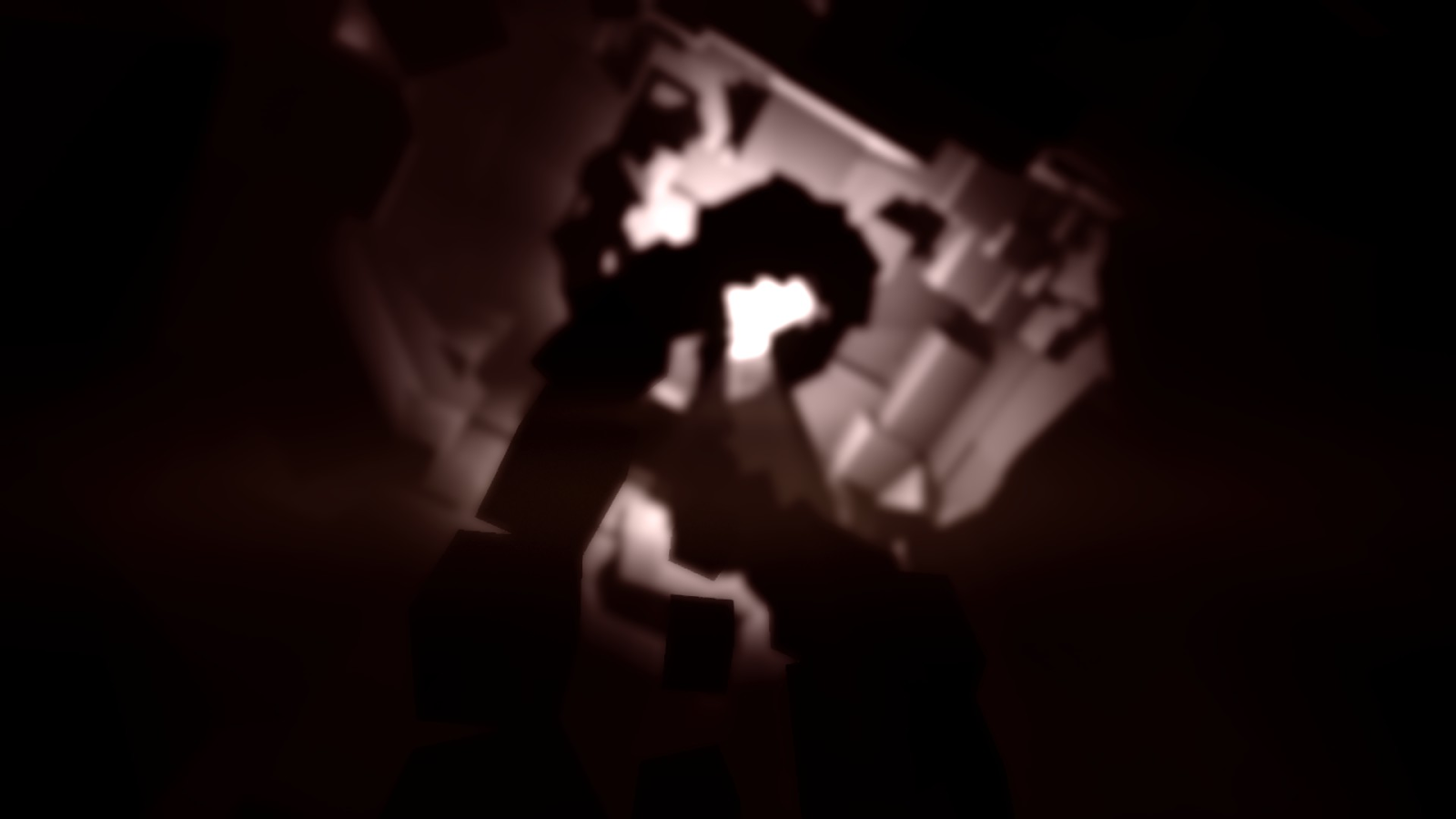 Awe and terror are never far from each other in NaissanceE. The game’s environments often go straight from suffocatingly claustrophobic to impossibly big. Most places are dimly lit, some are blinding. Stairs and walls twist around each other, defying anyone who would try to map their surroundings.

As a result, any sense of play feels secondary to the world itself. The game has platforming and puzzles, but the space hardly feels designed for it. Jumps are awkward and often in near pitch-black, with little direction or guide. I sometimes solved the puzzles by accident. Once, in a giant area with no obvious exit, I found myself in a room filled with what appeared to be graves, brutalist concrete mounds with blazing white light shining from underneath. The room turned out to be irrelevant to my progress, but it looked like it stretched for miles.

Part of what NaissanceE gets across is that being dwarfed by architecture feels fundamentally different than being alone in nature. Nature, at least, isn’t designed with a singular purpose in mind. Being lost in nature has a strange sense of solidarity that comes with it; I didn’t plan on being there, but neither did the trees or grass around me. I, and everything else, are collectively alive and shaped by only the most general of plans. 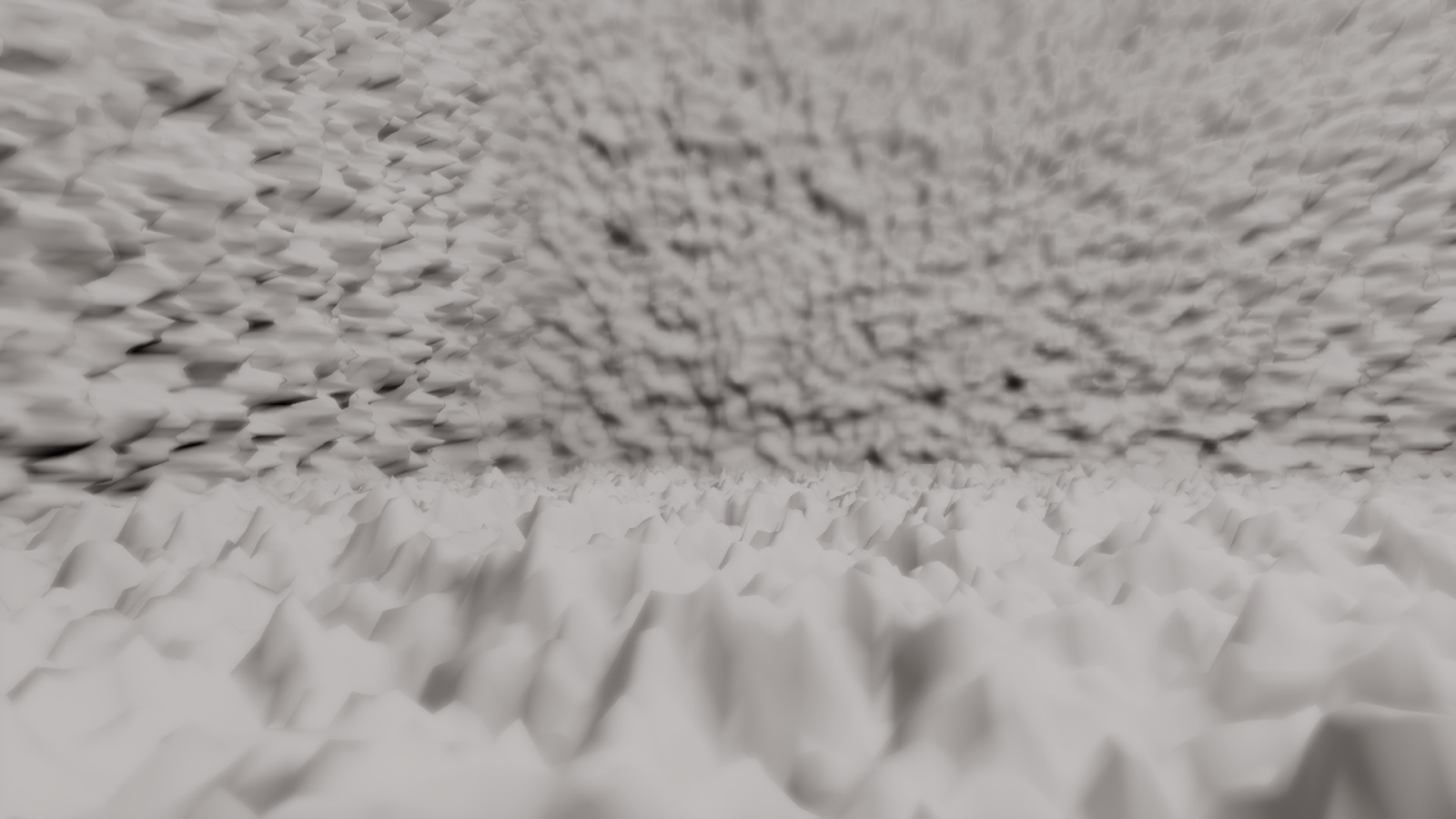 There is no ‘collective’ in NaissanceE, only extreme alienation. The world feels massive and entirely designed, and yet I had no place in it; all other life seemed to have been assimilated into the architecture itself. It was like I missed a rapture. Everyone else had left their bodies behind, and so there was no reason for anything to be designed for the organic. The game trafficks in existential dread. I felt like an outlier on a graph that didn’t even have any other data points. There was nothing but axes left.

I was hiking with a friend recently when we came into a long strip of open air, all the trees cleared to make a path for power lines to run through. Looking at the towers, we couldn’t help but chuckle at its implication of a ladder: just a few thin metal rods sticking out far enough to wrap one’s hand around. Who would ever actually climb this? It seemed like a joke.

Blame!, the 1998 manga by Tsutomu Nihei that NaissanceE draws from heavily, is a world made of these false concessions to usability. The comic is full of walkways without handrails over bottomless pits, and unlit tunnels just tall enough to fit a person inside. Most directly reminiscent of the ‘ladder’ my friend and I laughed at is this set of stairs, built inches out of the wall. What human would design a world like this? In NaissanceE, of course, those stairs are present. You have to climb up them to proceed. 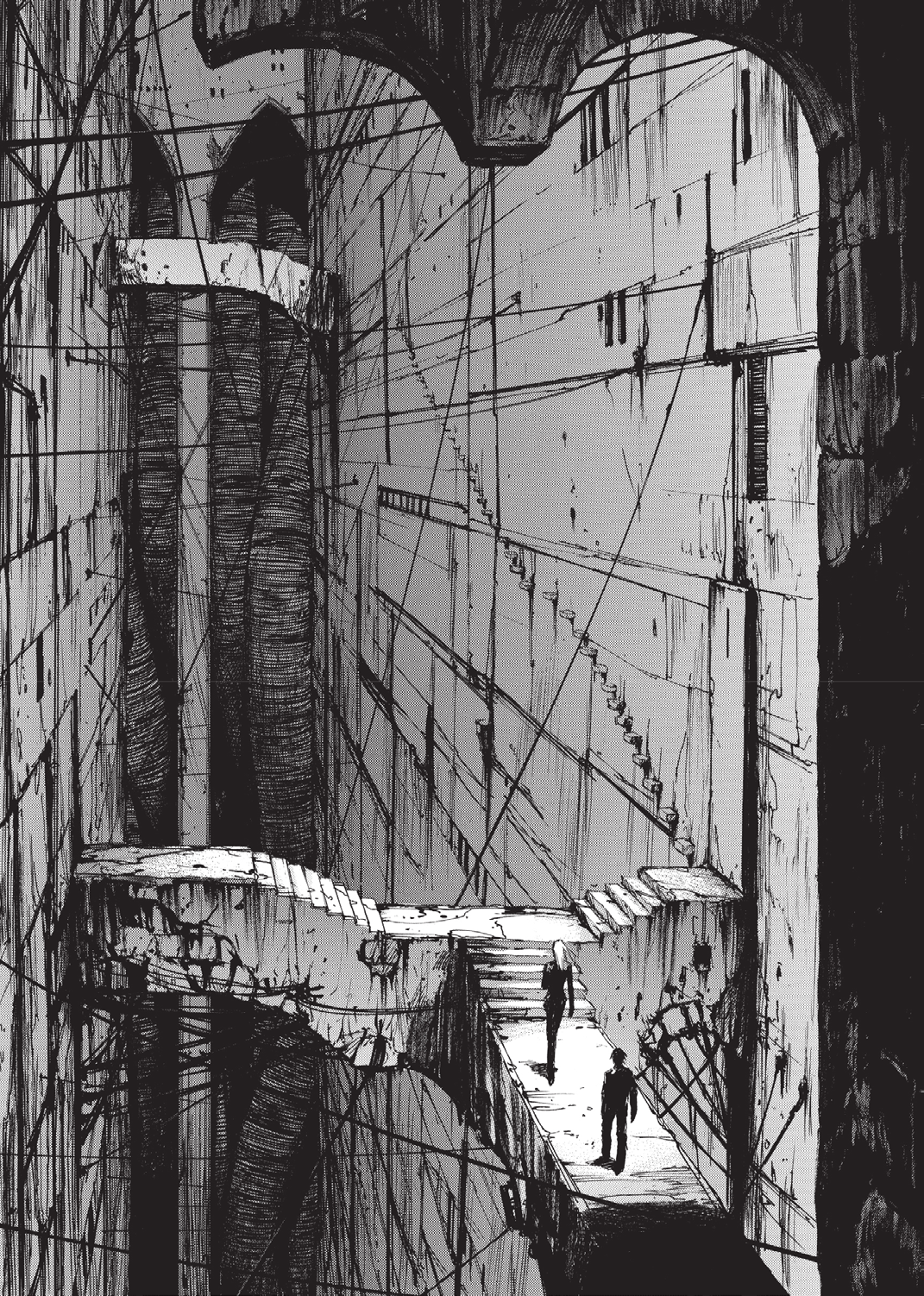 Naissance is the french word for birth. Fittingly, “NaissanceE” is a weird palindromic distortion. It adds a letter and an unexpected capitalization, making the word more symmetrically pleasing while simultaneously stripping it of meaning. That design philosophy continues through the entirety of the game and its world. It is architecture for architecture’s sake, endless and beautiful and built with only a passing thought to its own practicality.

Accordingly, NaissanceE is challenging. It’s a hard game, and it resists classification as any sort of ‘story.’ But its harshness is necessary for a vital question: what happens when we design ourselves out of the world? Whether by algorithm gone mad or some calamitous necessity, NaissanceE has so over-designed itself that there’s no room for us anymore. Sci-fi cities in the Blade Runner tradition are often hellish, but at least that 50-storey Coke ad is a reminder that they’re built for habitation.

There are no advertisements, no capitalist plots, no people present anywhere in the game. I don’t know what sort of techno-eldritch horror resides in the buildings of NaissanceE, but it seems inevitable that any humanity has simply fallen through the cracks. More of Jacob Geller’s writing can be found on his author page, and his less-focused ruminations on alienation are on his twitter @yacobg42. The inspiration for this piece came from NaissanceE’s excellent spread in issue 2 of Heterotopias by Gareth Damian Martin