A fast-paced, turn-based strategy game where you build the most powerful thieves’ guild in a gas-lit Victorian underworld is the basic outline of Tim Conkling’s latest game, Antihero. It’s a fairly simplistic descriptor for a game that offers a surprising amount of depth.

The first impressions when playing are that Antihero feels more representative of a videogame take on modern style popular board games where resource management is key, than a direct rival to other strategy games.

You take the role of the Master Thief, a character that is upgradable as the game progresses. Unkillable, you are able to choose how you approach your turns.

Starting with two you are able to scout and burgle, but with an upgrade, you can improve the amount of moves you’re able to make in your turn and even add damaging attacks to your repertoire. 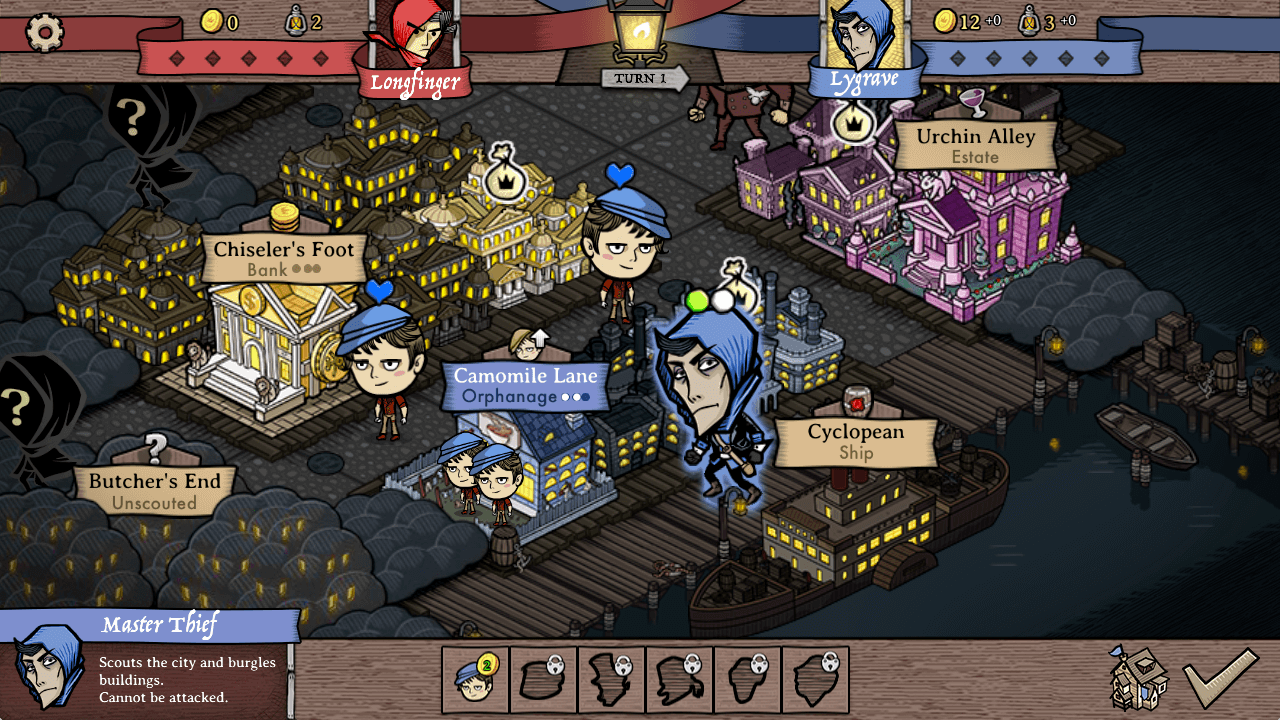 The game maps and uncovered buildings require scouting as other units you own will only be able to tread the same ground covered by the Master Thief and urchins can only run businesses, key for further resource generation, that have previously been burgled.

This is where managing your resources becomes key. Like those great boardgames it takes inspiration from, this is from where Antihero’s most stimulating moments derive, careful management can have you surprising your opponent but with the slightest error your world can fall apart very, very quickly.

Core to the experience is this resource management aspect, the most important of the game. There are two primary resources to collect, coins and lanterns. Coins are, as expected, a currency, something you buy your foot soldiers with. 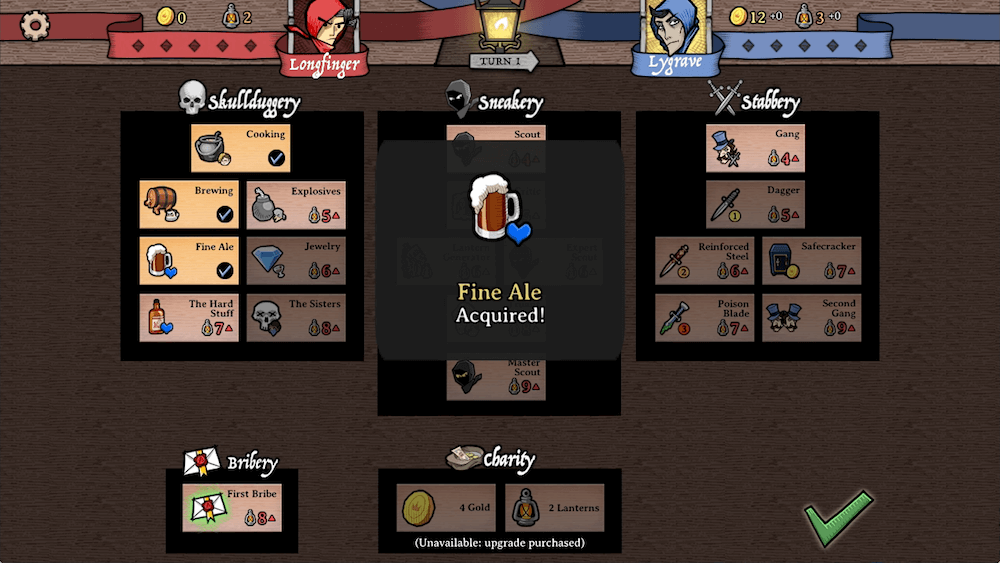 Lanterns are a little more interesting, being used to purchase skillsets. Skillsets are broken into 3 different categories: Skullduggery, Sneakery and Stabbery, with each allowing for progressively more damaging skills to be utilised in your bid to rule the underworld.

Matches are won by achieving “Victory Points”, which can be achieved in numerous different ways. Several must be accrued to secure victory. These can be accomplished by buying bribes for lanterns, completing assassination contracts (visible to both teams on the map), installing three urchins into a church (which can be lost if they are evicted by your opponent) and some opponents in single-player will also have specialist points which must be accomplished such as robbing the contents of a ship or stealing treasure from a specific building. By offering so many ways to win it means the game also gives you a lot of ways to lose, so planning ahead is definitely required.

You are never swamped with options, allowing for you to quickly formulate a gameplan, build up your units and approach your skillsets how you want but you are always kept on your toes. Your precious, high-level gang can suddenly be killed by an opponent lurking in the unscouted streets, your key resources lost because your urchins were evicted from your businesses killing productivity, victory points lost because you weren’t keeping track of your rivals moves on his turn.

The key to Antihero’s success that, despite this, it can just as quickly fall apart, staring down the barrel at a defeat you simply didn’t see coming.

It can be brutal, savage and unforgiving, and that’s where it shines because you are just as capable of doing the very same things that will have you cursing in frustration. You are always aware of just where it went wrong for you, you learn, adapt and improve.

If you’re a fan of this style of board game then, I would say at its $15 price point that Antihero is nothing short of a bargain. A fantastic blend of both video and board game, incorporating some of the best of both analogue and digital worlds.

Antihero is available to buy digitally now through GOG.com and Steam. The code for review was offered and supplied to Cane and Rinse by the game’s PR.