It has been more than four years since Telltale surprised everyone with their hit first season of The Walking Dead, and, by now, it is safe to call the current era of point-and-click adventures a proper comeback.

In the years since, though, there has been a nothing but disagreement about what the mold for the, “new adventure game” looks like, with industry veterans such as Ron Gilbert paying homage to the classic point-and-click with his Thimbleweed Park, genre newcomers such as Matt Korba adhering more closely to the Telltale model with the revitalized King’s Quest, and industry innovators such as Tim Schafer walking the line between the two with his much simplified, yet still fairly traditional Broken Age.

This diversity of styles has been well received, though, and the genre is starting to settle into a comfortable jambalaya of stylistic offerings. The more diverse offerings appeal to a wider breadth of tastes, from the action junkies to the players who prefer puzzles and quiet contemplation.

Falling well towards the old school side of the fence is 2015’s Kickstarter-funded point-and-click oddity Armikrog.

The extra years of technological advancement have just about perfected the team’s trademark ‘claymation’ style, but will the game win over new audiences with its brand new Xbox One and PlayStation 4 ports?

Armikrog follows Tommynaut, an explorer flying through space, and his magical talking dog Beak-Beak as they attempt to escape from a mysterious planet that they have crash landed upon. Encountering many odd creatures along the way, Tommynaut must learn to adapt to the topsy-turvy alien world if he is ever to find his way off of the planet. 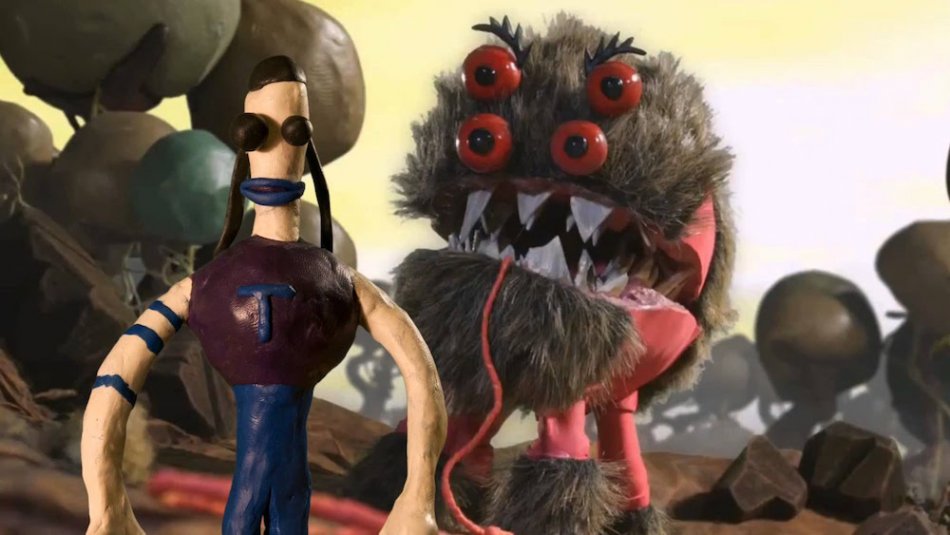 The game plays much like Broken Age before it. The elaborate list of verbs that defined the experience of older point-and-click adventure games has been replaced with a much simpler context-sensitive cursor. Another button can be pressed to switch between playing as Tommynaut and Beak-Beak, the latter of which is only used in very particular situations.

The cursor feels a bit inelegant when paired with a controller as the game’s input method. Though there are some niceties, such as the cursor snapping to objects with which the characters can interact, there were many moments of control frustration throughout my play-through.

Perhaps the most egregious of these annoyances was in solving a particular type of puzzle that comes up a few times throughout the adventure. It was a circular, Tower of Hanoi-like, sliding block puzzle that requires fairly precise clicking to rotate tiles. It was made frustrating due not only to the relative imprecision of controller thumb-sticks (as opposed to a computer mouse), but also due to the cursor snapping to nearby tiles.

Furthermore, the characters’ movement is guided entirely by clicks. It would have been handy to be able to move the characters with one of the thumb-sticks, independent of the cursor. Particularly since the walking speed is punishingly slow and there is no way to run or double-click to auto-advance to the next screen, as there are in many modern (and even old) adventure games.

Control issues aside, the real test of a point-and-click adventure game is in the quality of its puzzles. In this regard, Armikrog falls distinctly below the standard set by its peers and predecessors. 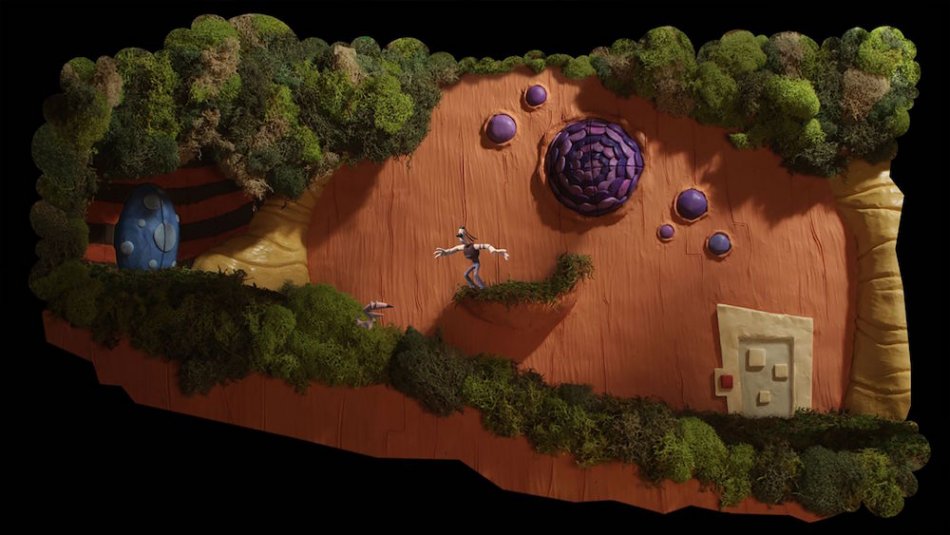 The puzzles tend to fall in three varieties: first, triggering something in one room changes something in another, requiring a lot of slow back and forth until the correct solution is deduced. Second, the answer is told to you directly many rooms ahead of where it is needed, making it a test of memory (or requiring the use of a notepad).

Third, standalone puzzle panels separate from the game world exploration entirely. While these puzzles tend to be the most successful of the lot, they are often marred by frustrating controls or are much too hard.

The puzzle that may prove to be the most challenging for many players involves a baby’s mobile that must be reassembled. The pieces must be put in order to play a song in the correct sequence, but it is underlain by the constant sound of a baby’s crying, making it not only annoying (and anxiety-provoking, on an evolutionary level), but also really difficult to hear the tune that the player is supposed to be mimicking.

Hard-of-hearing or deaf players may just have to brute force it. Worst of all, it takes an agonizing 63 seconds with each attempt before telling the player whether the solution is correct or incorrect. That is over a minute of baby crying, just waiting for the answer to process!

Mercifully, Tommynaut is often confined to a small series of rooms at any given time, meaning that there is little walking between distant points on the map to solve puzzles.

One of the greatest difficulties that I faced during my play-through, though, stemmed from its translation from a computer-based title to a console game. This may depend on the situation of whomever is playing it, but I found that many of the exploration puzzles involved finding items in the environment that would probably be very visible on a computer screen but near-invisible as I was sitting farther away from my TV. 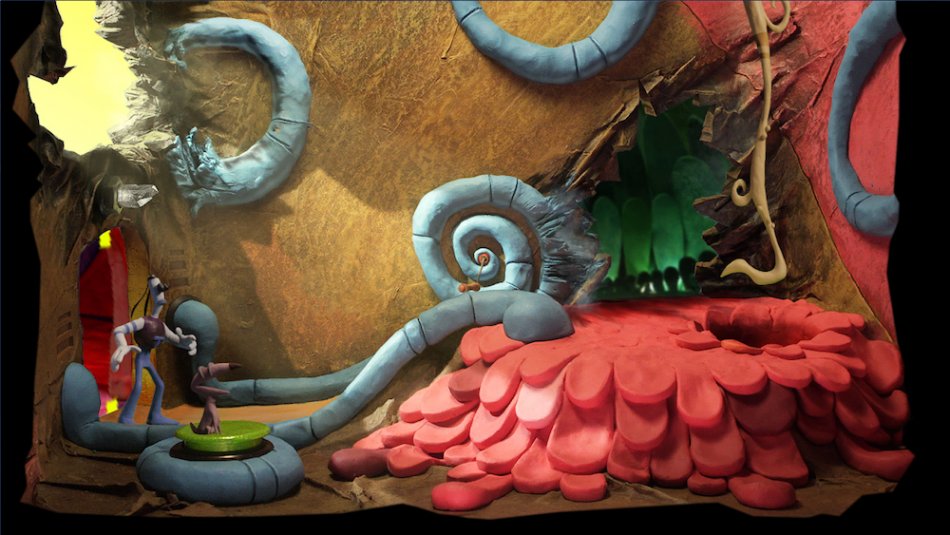 Though the whimsical worlds are exciting to look at, they do not necessarily serve the pixel-hunting challenges well. It can be difficult to tell what is an item to be interacted with and what is just set dressing, because these rooms are grounded in a nonsensical space. There is no apparent “normal”, so it is especially difficult to determine what in the scene is important.

As I have been alluding to, though, the game’s distinctive visual style is delectable and clearly the game’s high point. The animation of the clay figures is always spellbinding to watch, and the construction of each environment is a sight to behold. It is almost inconceivable to consider how much work the artists and animators, led by TenNaple, put into the game.

Similarly, the soundtrack, composed by alt rock musician Terry Scott Taylor is catchy and appropriately alien. Though I did not find any tune outliving the play session in my head, I frequently found myself dancing and whistling along with the music. It serves as the perfect accompaniment to the game’s bizarre visuals.

Performance-wise, the game runs admirably on the Xbox One. Though it is not a power-demanding title, it is always a relief to see that the port was carefully implemented.

For the reasons I mentioned earlier, I do not think that I would choose to play the game on console when I could play it on PC (or wait for the Wii U port), but it delivers an adequate experience, control issues notwithstanding.

Ultimately, the game is pulled apart by its two driving forces. On one hand, it wants to be a silly and nonsensical romp through a bizarre and unpredictable alien landscape, in the style of Adventure Time, capitalizing on TenNaple’s distinctive art style and sense of humor.

On the other hand, it wants to be a challenging puzzler to reason one’s way through. The problem underlying the entire game is that setting logic puzzles in illogical spaces takes a lot of very careful direction and communication that this game just cannot pull off.

Armikrog looks magnificent and it is genuinely edifying to see the level of craftsmanship and ingenuity that went into the physical creation of its worlds, but I found it to be unsuccessful in translating its aesthetic appeal into masterful gameplay.

All said and done, for a game that, much of the time, is reduced to a pixel hunt, at least the pixels being hunted through are pleasant to the eye.