It’s a pixel-y throwback with unexpected levels of tactical depth, an experience that controls well and sounds even better. And yet, I can’t view Action Squad from a detached perspective. It’s a game where you play as a police officer and invade homes, blasting everyone inside with ruthless efficiency. Despite intuitive design and a wealth of content, the political baggage that Action Squad carries makes it a game I find almost impossible to enjoy.

The original Door Kickers, released in 2014, was a top-down, room-clearing strategy game. You control a whole SWAT team as they surveyed locations, neutralized threats, and, yes, kicked down doors.

Operations often played out clinically; Your team creeps in, establishes a perimeter, and takes out every enemy without ever giving them a chance to fire back. The game’s style reflects this lack of playfulness. Team members speak in clipped, professional tones and dead hostiles fade impersonally into chalk outlines

Action Squad is not clinical. It’s a bloodbath. Each level, all variations on ‘kill everyone in the immediate area,’ requires split-second timing and a deep knowledge of your abilities.

Instead of a squad, you directly control one super-cop and kick and shoot your way through same-y rooms and hallways. Secondary objectives are frequent, and you can’t hope to pull a top score without saving hostages or defusing bombs along the way.

Combat takes inspiration from the classics, reminiscent of vintage run and gun games such as Contra and Metal Slug; both you and your targets can only take a few bullets before going down. But your cop isn’t nearly as acrobatic as the protagonists of the classic run n’ guns; instead of jumping and ducking, Action Squad requires real tactics to make it through. 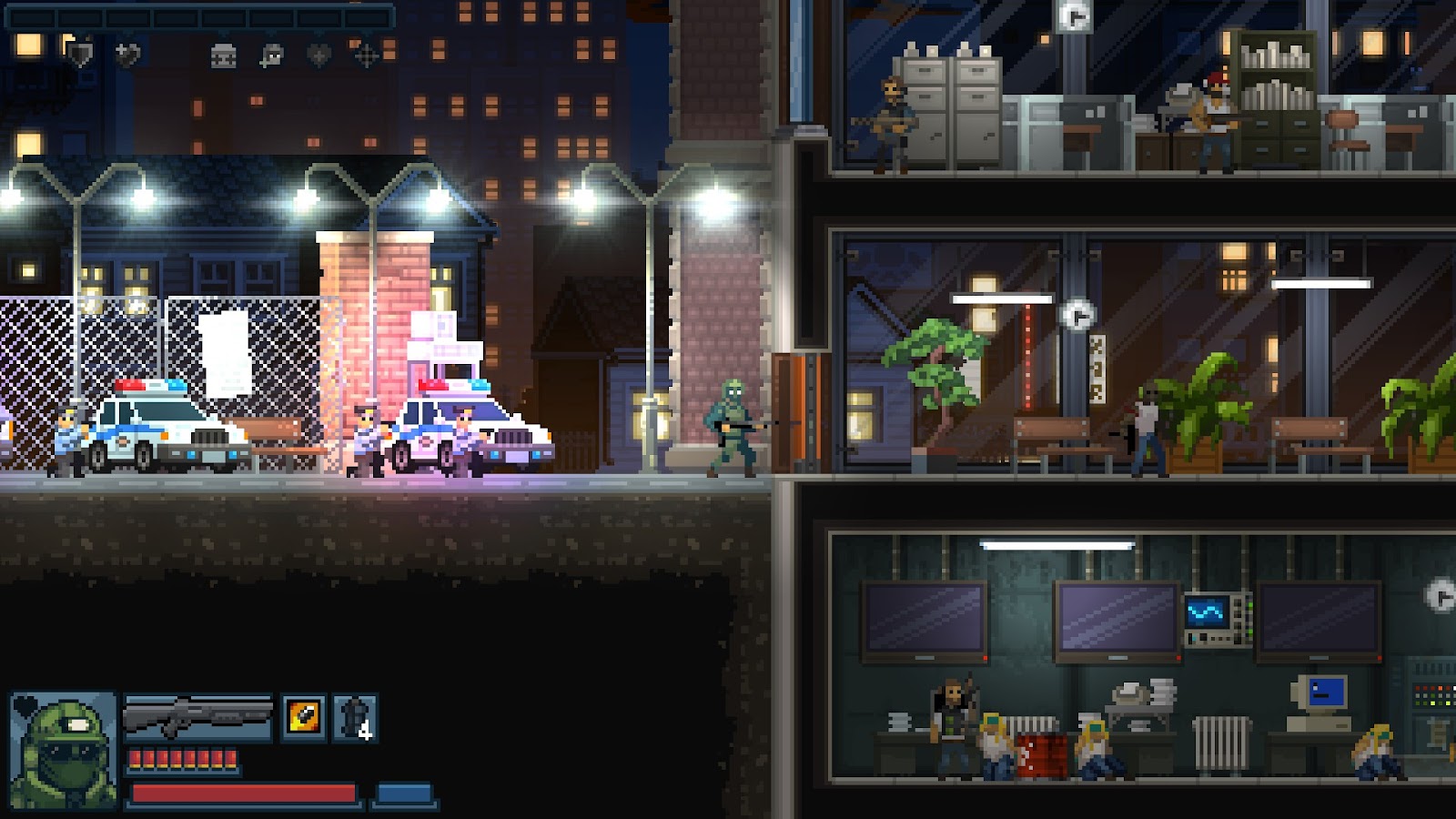 Levels frequently have multiple entrances, offering more strategic routes than simply sauntering in the front door. In fact, entering through front is often a death sentence. Enemies are fast and ruthless, and they’re typically prepared for attacks from the most obvious angle. Eventually, the only way I was able to clear levels was careful management of my stun grenades, body armor, and limited abilities like outside sniper support.

What’s more, there’s a surprising degree of character customization. Different classes offer radically different play experiences. Try and play a shield-bearer like you would a recon character and you’re going to have a bad time. Somewhat puzzlingly, the classes aren’t remotely balanced with each other. The shotgun-bearing ‘Breaker’ loadout absolutely steamrolls enemies in ways the others can’t even approach. Some of the more niche characters are clearly meant for co-op, bolstering each other indirectly and allowing for more varied approaches. But given that the game is 90% clearing rooms, the deadliest character is almost universally the best suited to a situation. As a result, whenever I wasn’t playing as the Breaker, I felt like I was hampering myself.

It seems like deadly force shouldn’t always be the answer in Action Squad. Hostages litter the levels, and enemies will sometimes even pick them up and use them as human shields. If you want top marks, you’ve got to find ways of downing all the tangos without also killing the innocent bystanders. Except, hostages can take a bullet without dying. In fact, they can take several.

When an enemy grabbed a human shield, I would flashbang the room and then shoot through the hostage to kill the baddie. More often than not, that hostage survived. Because of their resilience, I mostly stopped worrying about killing hostages. I would kick a door open and immediately open fire. 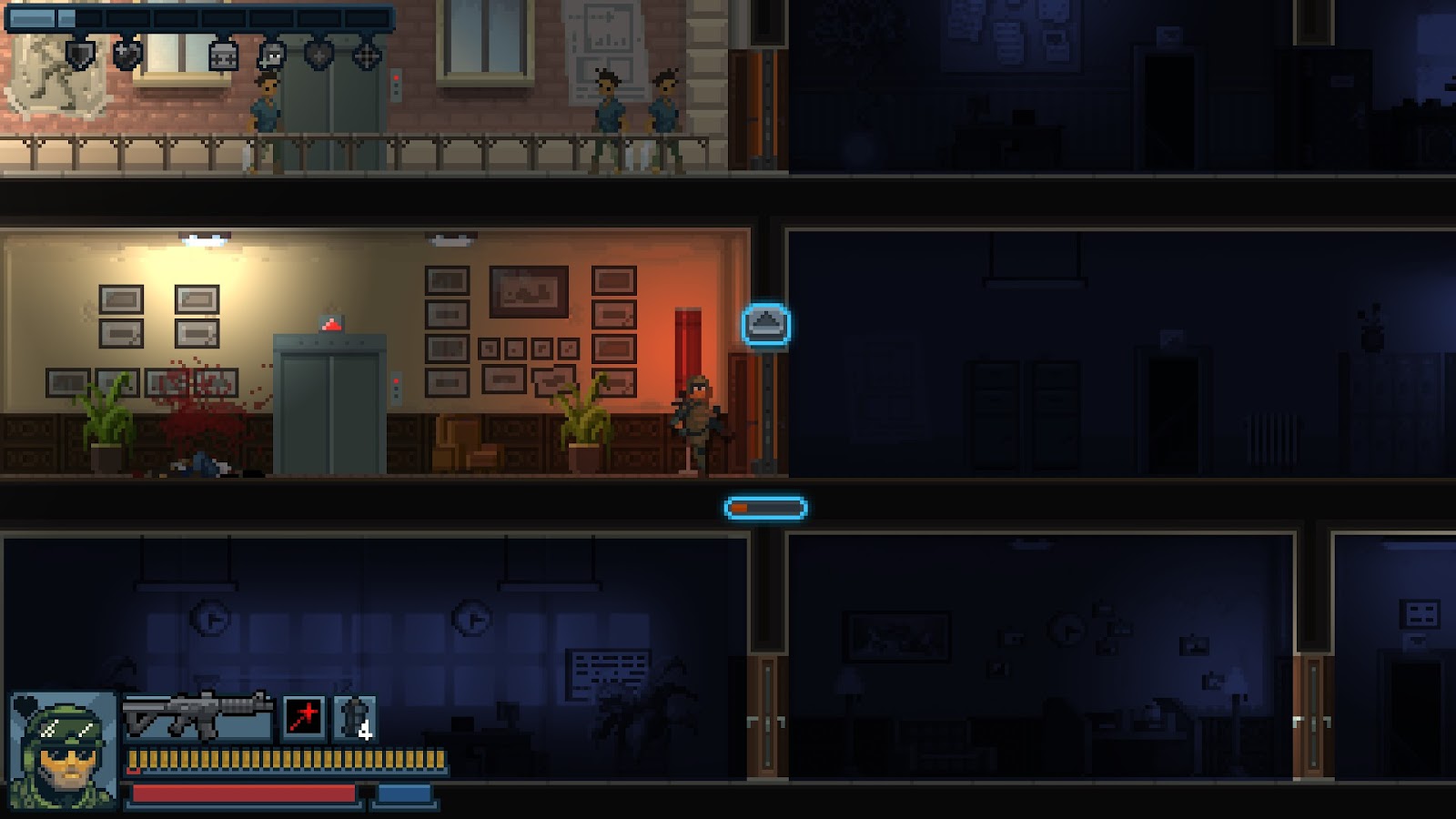 Action Squad describes paints itself as over-the-top. Its (excellent) music is distinctively full of cheesy 80s synths, and the characters spit one-liners with aplomb. But despite its best efforts at fictionalization, Action Squad is still a game with uncomfortable parallels to reality.

Just a few weeks ago, an off-duty officer in Texas got off on the wrong floor of her apartment building. She walked into the wrong unit, saw the man who lived there, and killed him.

Earlier this year, two police tased a mentally ill man to death while he sat in his bathtub.

Police have raided the wrong house and killed those inside.

And Door Kickers: Action Squad taught me that the most effective method of being a SWAT member was to blast open doors with no regard for the people inside.

Predictably, most of the locales you shoot through are low-income housing of one sort or another. The pixelated enemies are predominantly black and latino (one of the few lines of enemy dialogue is, “See you in hell, amigo”).

There’s only one model for the hostages, a blonde white woman who screams her thanks and runs away once you’ve freed her. After completing the first chapter, I noticed with mild horror that I got an achievement entitled “Clean up the ‘Hood.”

In real life, the victims of police shootings are disproportionately black men.

Disproportionately likely to be shot, to be arrested, to be prosecuted, to be executed. Although races commit crimes at virtually the same rates as each other, more aggressive patrols in predominantly black or low-income areas mean that the costs of an increasingly militarized law enforcement are increasingly borne by the most vulnerable.

In Action Squad, you are that militarized enforcement. 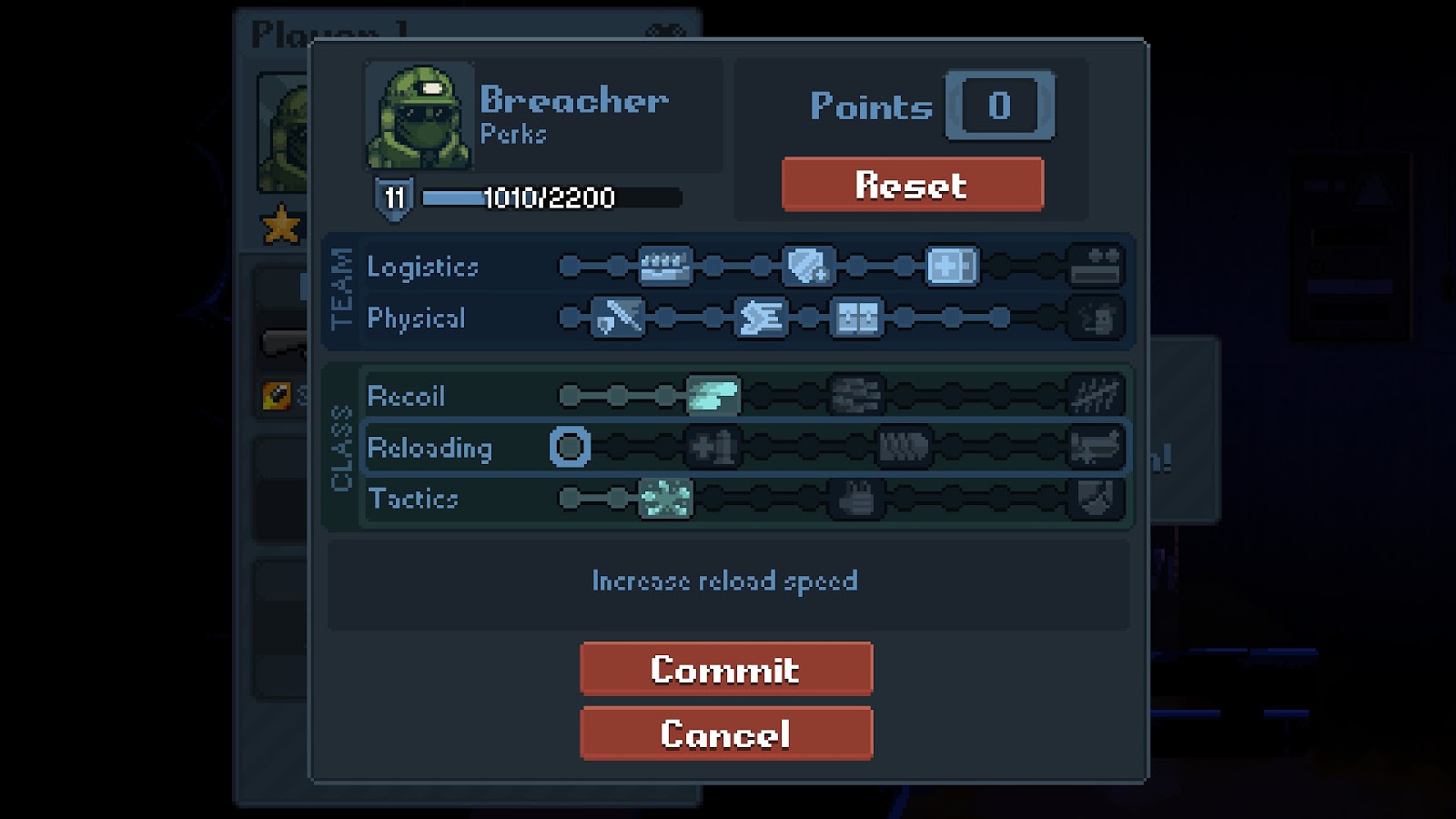 I don’t think that Door Kickers: Action Squad was made with malice.

The developer, KillHouse, is based in Romania and probably has far more experience with our cultural worship of the police than the violence of reality. But even in that respect, our culture has shifted. The lethal heroes of decades past have been largely replaced.

Instead of Mel Gibson and Danny Glover, we have the bumbling stars of Brooklyn Nine-Nine. Shows like Dear White People and Atlanta have confronted us with the bracingly real trauma that results from life in the shadow of brutal policing. It’s not that guns-blazing, no-holds-barred police fiction has been censored; it’s just not fun anymore.

Action Squad is, first and foremost, a videogame. It lives in a world where no-knock raids and deadly force are the norm for police operations. But unfortunately, I live in that world too. I think that’s why I can’t enjoy it.

Jacob Geller can be found on twitter @yacobg42, although he’d prefer you not use it to call him a SJW cuck. Read more of his writing on his author page.