Jacob Geller makes some observations regarding player agency – and the lack thereof – in one of the endings to Variable State’s Virginia.

It was minutes from the end of Virginia, a game that I had until that point adored, and I was frustrated.

I had just watched the apparent climax of the story, an emotional montage tracking the life and career of the game’s protagonist. The music was pitch-perfect, the editing was effective, and the final beats of the story were unexpected and melancholy. But it felt wrong.

Although Virginia had never given me true choices in how to continue, it had always let me drive the action of the story. I walked to my FBI superior’s desk to receive my orders, I clicked on a lock to pick it, and I sat quietly and drank with my partner.

Then the game took all this from me. It showed me a movie of my character, a cutscene in a game that had let me hold control every step of the way.

To add salt to the wound, the cutscene was devastating. It was a cruel narrative twist, and a betrayal of the person I thought I had been controlling… and then the game kept going.

Virginia, as it turns out, has two endings. And unlike an RPG where your actions determine if you receive the “good” or “bad” finale, Virginia lets you experience both. The first, you watch. The second, you play. 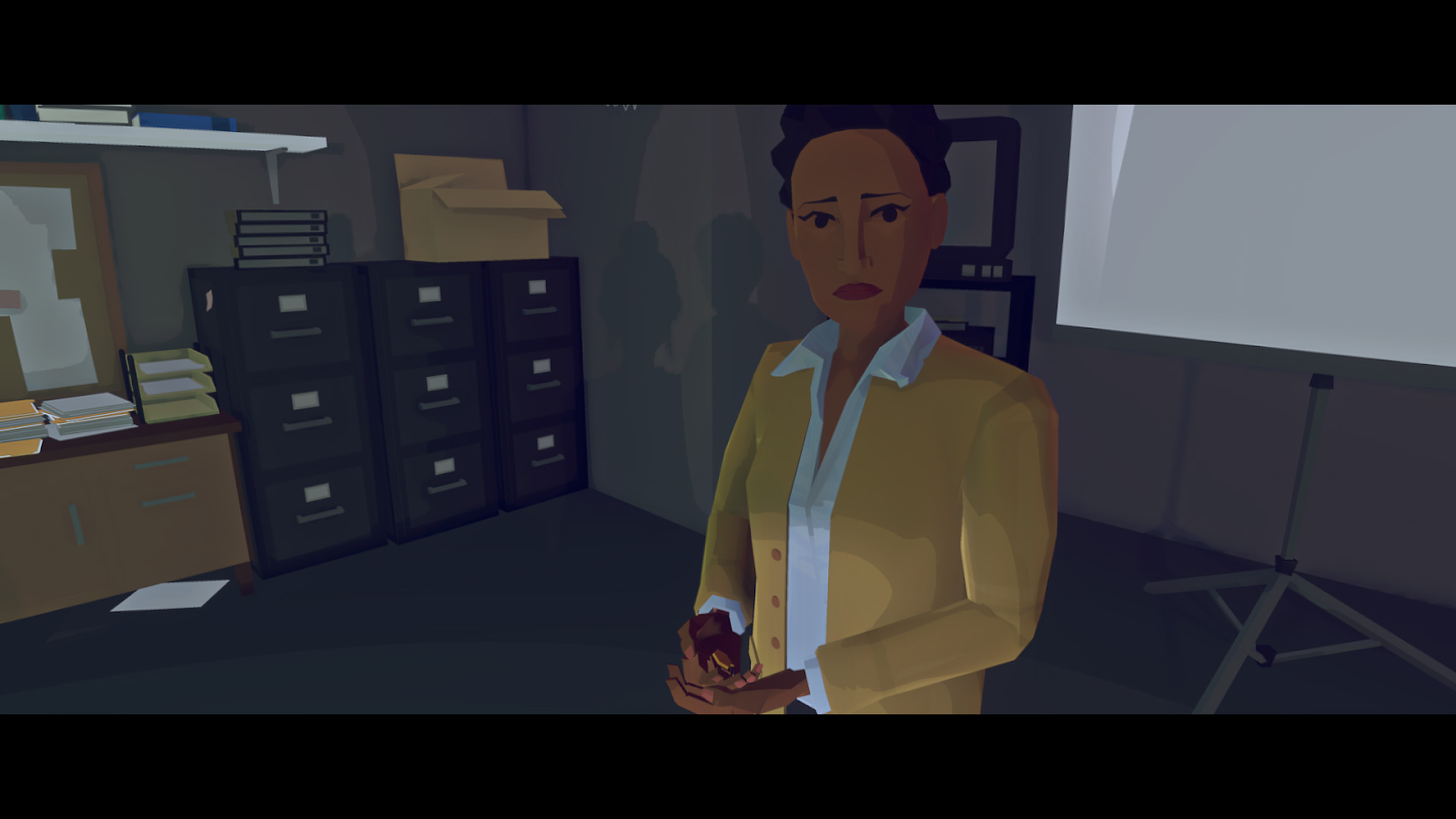 The story of Virginia is a deceptively simple one. As a new FBI agent, Anne Tarver (the player’s character) is tasked to accompany senior detective Maria Halperin on an investigation into a missing boy.

However, Anne is given a second task; to spy and report on Maria. Over an effective mid-game, I worked, learned, and bonded with Maria. She took me to a wonderful little dive bar, she made me breakfast, and I eventually abandoned my secondary directive. Maria was my friend, and if the FBI wanted me to turn her in they could lock me in jail.

As it turns out, they did. The final day of the game opens with Anne waking to the police at her door, and subsequently being thrown behind bars for refusing to comply with her mission. After she languished in a cell for a while though, Anne did something I didn’t want- she gave in. She went to her director’s office and turned over everything she knew about Maria, her unorthodox experiments, and her unsanctioned relationships.

More than simply freeing her, this betrayal got Anne promoted. And over the next several minutes I watched it happen again and again. Anne rose the ranks of the FBI, informing on coworkers, colleagues, and friends.

Anne didn’t adjust easily to her new role either; I watched the toll it took on her emotionally, unable to develop a single personal connection before being assigned to get them fired.

Finally, with no more friends to betray, Anne is given the desk of her own boss. She welcomes a new young woman into the bureau, presumably about to set her on the same course of deceit and alienation.

And then I opened my eyes in the jail cell. And the game started to finale, again.

The second ending of Virginia is… messy. We jumped around in time, seeing Anne’s father, a ritual sacrifice, an alien abduction. Whereas the scene before was a logical, chronological story, this second ending is a trip. Maybe literally. It does start by taking a tab of acid…

If I had to define the two endings by styles of cinema, the first would be something grounded, a Fincher-esque crime drama, while the second would veer far into Lynchian-Twin Peaks territory. However, by judging them only on their visual content misses the massive difference in interactivity the two endings provide. Because the second ending, the messy, abstract, dreamscape one; in that one, I never had to give up control.

Despite walking simulators often being criticized for their lack of interactivity, there’s an undeniable difference between watching a character act and controlling them oneself, even if that control boils down to simply picking a direction to walk and look. I watched Anne turn in her closest friends, but I made the choice to chase after a UFO.

Somehow, even though the UFO was far more foreign, controlling myself lent the scene a little bit of verisimilitude that was completely absent in the cutscene. I wasn’t just an onlooker in Anne’s life, I was participating in it.

To be clear: I do not know what the UFO means at the end of Virginia. I can’t quite grasp the significance of an animal sacrifice, and I’m not sure what to make of the repeating broken key motif throughout the game. But I can guess at the importance of the differences between the ending I was shown, and the ending I played.

Although the game never makes explicit plot points out of the fact that both Anne and Maria are women of color, they stand out; they stand out in the predominantly white FBI, in the small, mostly-white town where the investigation takes place, and in the blindingly white ranks of videogame protagonists.

There are nods to activism in their past as well- an old SDS poster (Students for a Democratic Society) in Maria’s house hints at more radical views that she may have compartmentalized to work at an institution like the FBI.

The race of the characters are important given the first ending of the game, in which Anne narcs on her colleagues in order to climb the bureaucratic ladder. The men she gets fired are predominantly black and brown; like Anne, they’re anomalies in the FBI, and in the world of videogames. And although the game never confirms that the people she’s turning in are innocent per se, they’re never shown as anything except kind, helpful, and trusting.

In this ending, I watched Anne become complicit.

This ending doesn’t strip her of the humanity she’s earned throughout the rest of the story, but it does place her as a cog in a much larger machine. Her work stops serving any greater good. Anne Tarver, a black woman who made it in a monolithically white, male field, now apparently works to stop anyone else like her from achieving success.

When she opens her eyes back in the cell, it’s tempting to view the first ending as a bad dream. This is doing the narrative a disservice though. Anne’s journey through the FBI isn’t a fairytale ending, but it is an eminently believable one.

It’s all too easy to find examples in real life that parallel the game.

The story doesn’t even condemn Anne for her choices; although I may have been frustrated to see the character I connected with go down such a dark road, it never portrays her as evil or malicious. She’s simply going with the oppressive, institutional flow.

Perhaps because of its disconnect from reality, the second ending feels more hopeful. There are the supernatural events, but there’s also more of the story. We gain insight into the missing boy’s background, and his reasons for running away.

I met Anne’s aging father, and learned more about where her drive and passion came from. The last scene of the game has Anne and Maria driving out of Virginia, leaving their jobs and their case behind. Just like the game let me take control back from the cutscene, it implies that Anne has made the decision to take back control in her life.

The path ahead is unknowable, but it’s a path that we chose.

More of Jacob Geller’s writing can be found on his blog, thirteenthcolossus.wordpress.com, and more of his scattered anger at politics and video games are on his twitter, @yacobg42