1983-1984 are interesting years in Metal Gear terms. Obviously, The Phantom Pain takes place, but more importantly, 1983 is the year in which mulleted synth-pop group Kajagoogoo’s abomination Too Shy was released.

Too Shy is, of course, an essential part of my Metal Gear Solid V experience. In Apocalypse now, Lieutenant Colonel Kilgore used Wagner’s powerful Ride of the Valkyries to scare the Vietnamese, but I find Wagner passé. By comparison, Too Shy is so dissonant and grotesque to the ears that I find conjures a sinister, more cerebral sense of dread in my enemies. Choosing your one chopper’s theme song is one of many nuances that makes MGSV my favourite game.

There are, however, two things mar my effusive praise for MGSV. Firstly, it seems you can have too much of a good thing as the collateral damage from hearing many hours of Limahl’s crooning has left me an emotionless husk. Secondly, it really bothers me that my avatar looks like this: 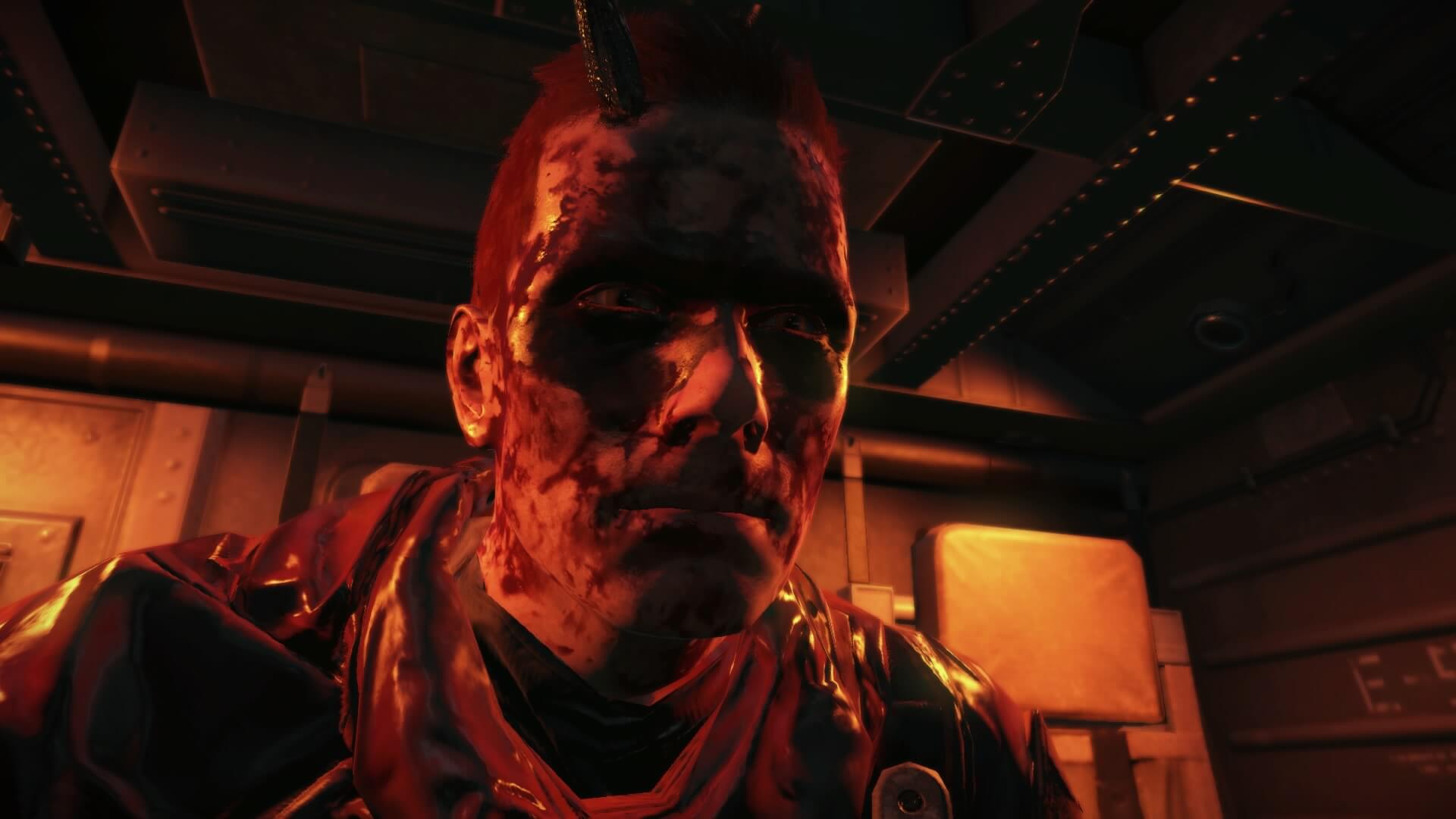 This shabby fellow is supposed to be me. Notice the shard of helicopter detritus protruding from my forehead and blood, everyone. You’d normally find this look to be the reserve of an impatient player who prefers trading bullets and explosives. I enjoy my stealth games to play with the urgency of plate tectonics as I generally prefer my conflicts to be one way.

If you’re a filthy person in MGSV, a swift scrub on Mother Base’s surprisingly comprehensive shower network would see you right, but not for me. This is because hidden behind the mechanics this masterpiece is the demon system, which rewards affable behaviour by allowing you to bathe. It reprimands bad behaviour with filthiness and an outwardly demonic appearance. Warmongers are expected to wear the blood they have wrought, adopting a horned appearance as the head shard grows thus resembling the cloven-hoofed one from the Bible.

The demon system can be reversed though through good ‘Christian’ deeds. Reversing isn’t especially easy as he effort required to reduce this point score is considerable. For instance, you can repent for your sins by visiting the zoo, casual animal conservation, extracting wounded soldiers and such, seeing a 30-120 point reduction per instance and generally completing extracurricular missions offer slightly more. A bloodied appearance begins when you accumulate 50,000 points (incidentally, the exact point accumulation of developing a nuke) so you see what I’m up against.

I recall playing The Phantom Pain as some kind of pillar of goodness, though my memory clearly fails me as upon reflection, many morally questionable activities no doubt contributed to my current position; let’s inspect: 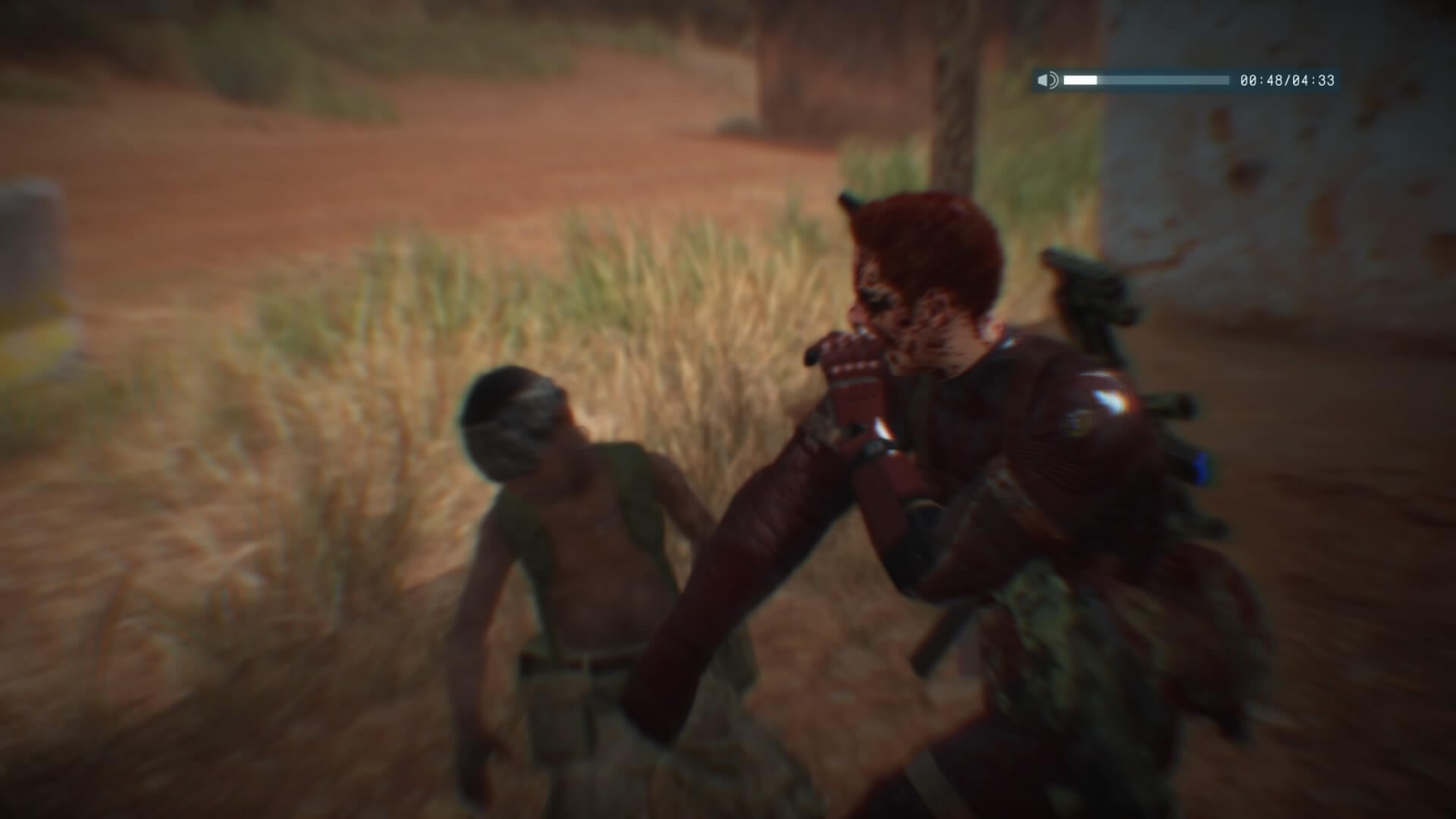 I’m not proud of the above , though that last one’s especially difficult to accept. Listen… I’m the real victim here. I had to create another nuke because I didn’t realise it was possible to dismantle the first one. The achievement requiring me to do so is hidden. How was I to know? An account that will no doubt hold water if I am summoned to stand trial in The Hague for war crimes.

In my case, achieving nuclear capability twice has increased my demon level to such an extent that showers are no longer cleaning me… or my conscience. Conventionally, achieving 100% completion will naturally reduce your points below the threshold, thereby teaching you a valuable lesson about international warfare and mutually assured destruction. I’ve already done this and it didn’t work for me, which begs the question, if I can’t rely on content to achieve both karmic balance and acceptable hygiene, what can I do?

After a hiatus of 18 months, I’ve returned to MGSV with the answer. Cap in hand and suitably ashamed, I’ll achieve redemption, listen to more 80s synth pop more than is advisable and rid myself of this bloody curse, all through the medium of nuclear weapons inspecting. I understand that dismantling 10 of other player’s warheads rewards players with a decrease of 30,000 points, by my calculation I’d need 20. I knew I’d have to roll up my sleeves and learn to love Forward Operating Base (FOB) missions.

Some context, the main campaign in my case involved heavy reliance on Quiet, who alongside being eye-rollingly garbed is a capable and deadly companion. Stockpiling nuclear warheads to disarm on the other hand asks you to become a sort of grizzled and deadly CQC Hans Blix. An obvious change of tact from my standard M.O.

I’d tried to stay away from FOB missions on account of their propensity to be savagely challenging. In this mode, it is not possible to rely on the support of a Quiet or D-Dog. Most cruelly, it is not possible to ritually enjoy Kajagoogoo’s awful, yet seminal hit when outside of the helicopter, this was totally out of my comfort zone. Anyone capable of developing a nuke will be a fair way into the game. Naturally this creates a strong correlation between nuclear capability and a effective base defence. My goal was clearly ambitious.

At their best, FOB missions decanter Metal Gear Solid V gameplay down to a molecular level. Narrative free. Swift in pace. Small areas. Full visibility and plenty of cover. This promotes a quick thinking and consideration from the player. They compel you to execute plans intelligently and efficiently. Odds are that something will inevitably go wrong, plans get scuppered and frantic gunfights ensue. This is in part because players prepare their bases uniquely, mobilising unit types, weapons and technology to thwart the invader. Each FOB feels creative and unique as a roguelike does.

At their worst, FOB missions feel practically unplayable and unpleasant, not unlike Too Shy. It’s difficult recommend getting into FOB missions two and a half years or so after release as anyone with a modicum of time invested in the game enjoys an array of anti-stealth, anti-tranq, anti-bullet anti-everything equipment. This leaves you as the invader at a woeful disadvantage. I found in my first 10 hours of the task that I’d frequently get spotted by the first enemy who seemingly enjoyed the sensory awareness of an outhouse rat, and die soon after.

I was forced to adapt. I’ve learned to get comfortable in close quarters, I’ve adopted a strategy of using CQC through utilising smoke grenades and throwing magazines to create distractions, regularly using a cardboard box, something I seldom did in the campaign. Couple with this using side-ops resources to remove laser grids or cameras, making your invasion more attainable. I had fallen in love with MGSV for its extreme distance and sniper/spotter game play, but these new strategies have brought forward new and fascinating experiences.

Embracing FOB missions also unearthed long forgotten sensations and memories of similar experiences I’d had in earlier Metal Gears. I was reminded of how mechanically robust Metal Gear has always been. Enemy AI in Metal Gear is dependable and predictable and the fun comes from fully ingesting the rules, then breaking them, then creating your own rules and breaking them too. While we’re not going to get another Kojima-led entry to the series, if FOBs are to be my final new experience in his Metal Gear game, I’m thrilled.

But it’s not all good. Logistically, finding a player with a nuclear warheads seems now to be an exceptionally difficult task itself, let alone successfully invading. If you are lucky enough to acquire a base with a warhead, the appetite for engagement is now so high that your chances of securing that invasion are slim. For example, on my first day it took me an hour to locate one FOB with a nuke, which I then failed to steal due to it’s cruel difficulty. 20 hours in and I’ve decommissioned one nuke. Speaking mathematically, I doubt I can sustain this kind return on investment but I’ll persevere because playing the mode is it’s own reward. Just maybe at a slower pace… perhaps with a new chopper song… Laura Branigan’s Gloria maybe.

I can accept that my character will never truly wash the bloodshed he… I caused in game. As his wrap sheet shows, he’s a deplorable human and perhaps this look is apt penance for my transgressions.

It’s been fun returning. I’m not burning out on my goal yet even though I’m convinced I will never achieve it. I’m satisfied knowing that I’ve played a game I love to its fullest extent. I can spread my energies over new tasks, maybe something cathartic like addressing the profound psychological damage caused by listening to Kajagoogoo’s magnum opus, ad nauseam.