Jacob Geller explains how he found himself rapt by Subnautica’s alluring undersea environs.

Eight years ago or so, I sunk literally hundreds of hours into Minecraft.

Many of the systems the game has today weren’t present- there were no villages, no spells, no dragons. But even in its relatively barren state, I loved gaining mastery over the world. From literally nothing, I was able to build the tools to shape mountains and control wildlife.

But once I had built everything and explored everywhere, I lost my urge to play Minecraft or really any kind of survival game. More hours of resource-gathering, hunger-managing, torch-building gameplay was a hard idea to stomach. Subnautica’s introduction is not gentle. A crash landing in the open sea forced me out into uncharted waters within minutes. The game, really, is nothing but uncharted waters. The planet is entirely sea, which means gathering even the most basic resource isn’t quite safe. Every dive starts a deadly, suffocating timer.

And yet, completely submerging the play-space of the game means the world can be both adversarial and teeming with life, brilliant and dangerous and beautiful all at the same time. There’s the pressure of survival, of course. I had to quickly learn which fish could help filter fresh water and which mushrooms could be synthesized into batteries for my gear.

However, unlike most survival games, most of the game’s world is just… there. Vines can be gathered and minerals can be mined, but for each player-friendly resource there are a dozen facets of the ecosystem that exist simply because it feels like they should.

It’s hard to make land feel truly alien. We see the same tropes- frozen wastelands, deserts, giant fungal forests- and even more damningly, the same ways of interacting with them. No Man’s Sky presented an infinite universe of procedurally generated worlds, yet each one existed just to be hiked across and admired in essentially the same way. The grass changed colors, the skies had different horizons, but its interpretation of space was ultimately a dreary vision of walking through the same handful of elements and landmarks thrown across trillions of miles.

Subnautica fights, tooth and fin, against this trend. The easiest way for a game to make an island would be to imitate Earth and have the seafloor just rise out of the water. The game could even make a special note that the island was the product of a volcano or something, lending it some virtual verisimilitude. Subnautica’s world is alien though, and it does not cater to our earthly expectations. 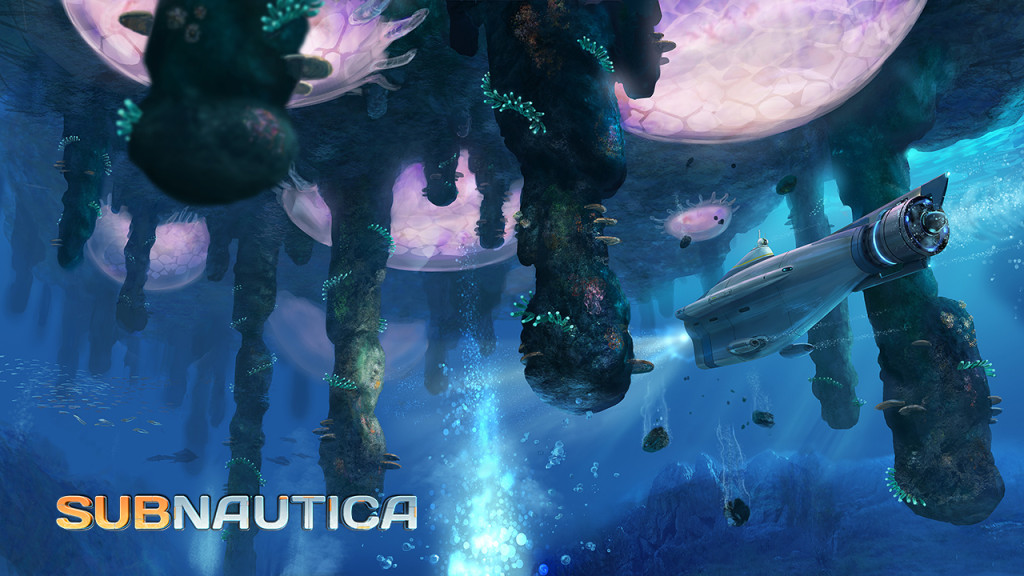 There’s an island to the southwest of the initial crash site that does not touch the ocean floor at all. It’s held aloft, just out of the water, by the buoyancy of thousand-year old organic life. An excerpt from the game’s databank reads:

“Immature floaters are borne near the surface, from where they sink to the seabed, attaching to any stable surface they find on the way. Those individuals fortunate enough to attach to a digestible nutrient source will grow in size, thus increasing their buoyancy and drawing whatever they are attached to closer to the surface.

Those creatures which successfully raise a landmass to the surface are rewarded with a burgeoning and permanent food supply, allowing them finally to reproduce and begin the cycle again.”

These ancient floaters can’t be destroyed or harvested, but they’re nevertheless a vital part of the ecosystem. Likewise, there are coral trees the size of skyscrapers, tiny heat-resistant bottom-feeders, great underwater walkers that beat a path across the ocean floor, and too many other phenomena to name.

And, unlike Minecraft or its ilk, most of Subnautica’s planet is unexploitable. The world is, above all, utterly unconcerned with the player’s existence. Whether you build a vast underwater base, escape the atmosphere, or drown in a cave means little to anyone but you.

My first vehicle, a submarine I painted bright red and named Baby, allowed me descend deeper than I even thought the world would allow. Hours later, I climbed out of the submarine to grab a piece of copper and turned around to see Baby wedged in the jaws of a hundred-foot long leviathan.

The headlights of my ship briefly lit up its thrashing tail, it screamed, and then both the creature and my ship were just…gone. I had to swim more than a kilometer back to my tiny lifepod, glancing nervously over my shoulder the entire time. 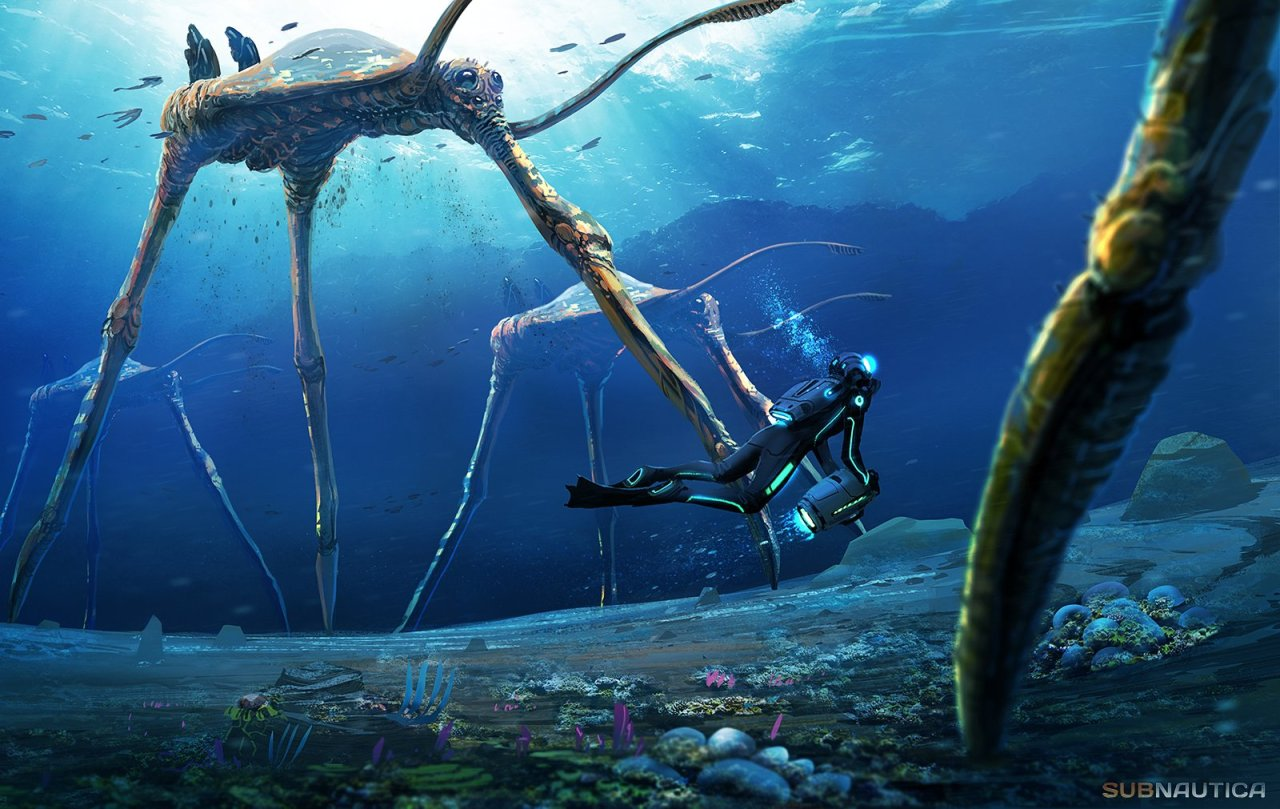 Weeks of in-game time later, the leviathans were just momentary distractions as I ventured still deeper into the ocean. Poisonous rivers ran through channels at the bottom of the sea, winding around massive skeletons and eventually dumping their contents into open flows of magma almost a mile underwater. As dangerous as these biomes were though, I no longer felt at odds with the planet.

I had changed myself, shifted my own habits to better fit this new world I found myself in. My new submarine (Edgar) harbored sprouting trees. I swam alongside the ocean’s creatures, unafraid of their touch. I even built my base out of glass to feel more connected to the ocean around me.

Both as a political statement and a personal challenge, Charlie Cleveland (the game’s director) spoke explicitly about wanting the player to survive without weapons. It’s a simple choice, but the implications of decision radically differentiate Subnautica’s tone from other survival-themed games.

When I played Minecraft, I aimed for subjugation of the environment. I manipulated the spawn rates of monsters so I could gather their resources more effectively, built massive castles, and carried a sword and bow with me everywhere.

Subnautica’s planet is initially hostile and frequently terrifying, but my respect for its weird majesty only grew with time. The game’s unexpectedly moving narrative isn’t themed around dominating nature, but becoming part of it; you succeed where others failed because you’re able to make peace with the ocean and its inhabitants. 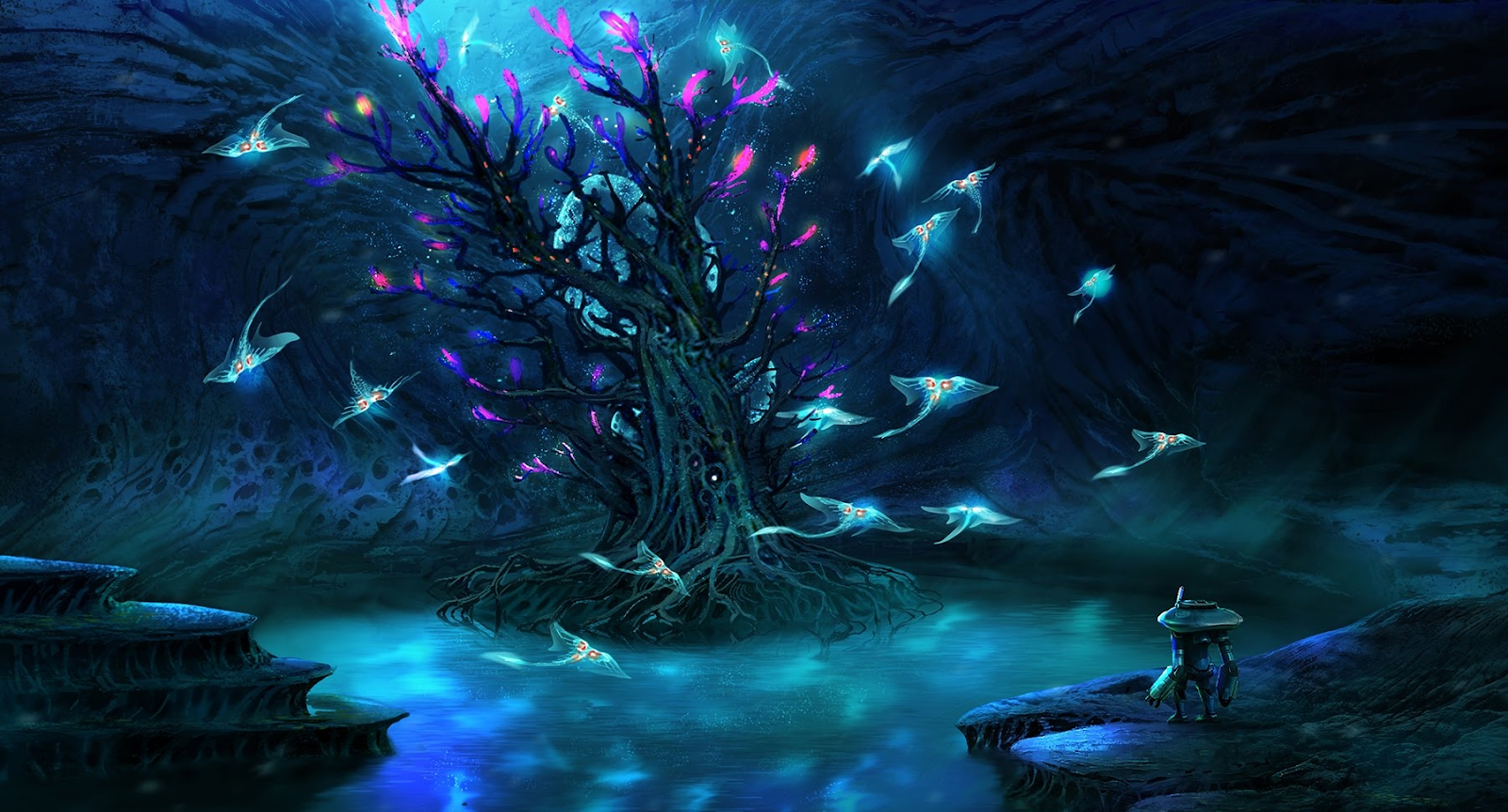 The game’s ultimate goal is to leave the planet, to build a rocket and rendezvous with other humans a galaxy away. As much as I worked on my escape plan however, I kept finding reasons to put it off. One more trip down to the grand reef, where great bioluminescent bulbs are rooted to the ground next to geothermal vents. One more scan of the caves above the sunken river, following translucent rays to a delicate mother tree.

I truly felt like I was losing something as I took off in the rocket. When I reached space, I was met with congratulations. Also, I was met with a notification of my outstanding debt to the company that had stranded me in the first place. The game isn’t subtle with its dichotomy. My struggle for fresh water and shelter was gone, already replaced by reminders of the capitalist struggles for domination that consume most of the modern world. I’d probably return to a futuristic city or space station, familiar but emotionally far more alien than the oceans I had just left.

I already missed feeling like part of a vast coral reef, different but connected to every other part of the ecosystem. I missed my planet, where I was allowed to just exist.

More of Jacob Geller’s work can be found on his author page, and his unhinged ramblings can be addressed on his twitter @yacobg42