I don’t review many games in the worded format, not because I don’t like to but more often than not I find it easier to verbalise my feelings during our podcast.

However, some games are released and my feelings are so discombobulated (it’s a word!) that I struggle to keep it bottled up and fresh until the podcast is recorded.

Now, we are doing a Zelda series of podcasts soon but with Tri Force Heroes released, I fear my memories of this game will have breached their ‘best before’ date and go mouldy by then.

It’s shallow, it’s linear and it doesn’t offer the scope of a traditional Zelda game. Yet, after 16 hours of play, I find myself wanting to go back and help some of the more misguided adventurers out there.

The Zelda fanbase is passionate and I’m right there alongside them.  More often than not, you’ll see players using the hero’s name or a variation thereof and you can, surprisingly, play/endure a dungeon with two of them. For better or for worse. 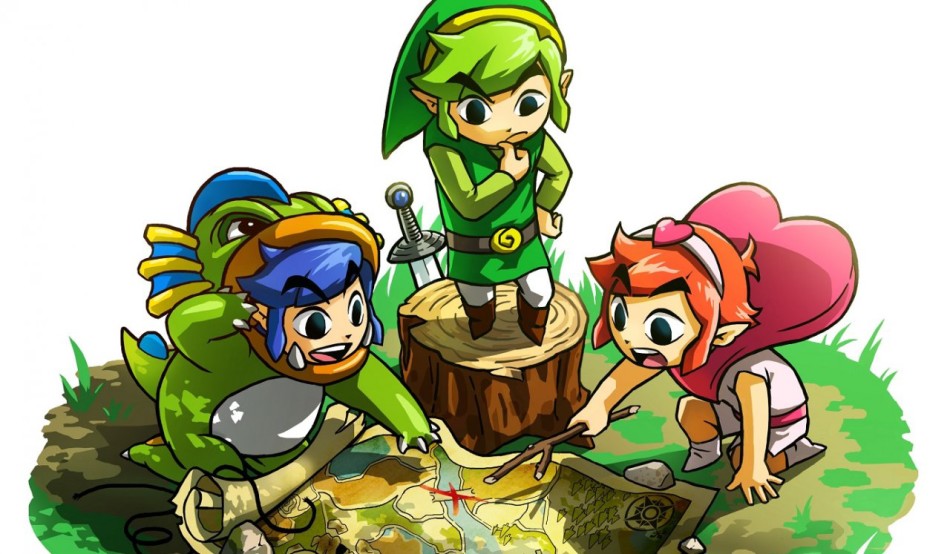 This might not be Hyrule but instead ‘Hytopia’ and 99 times out of 100, you’ll be playing online with random Links who you cannot voice chat with. Again, the phrase ‘for better or for worse’ springs to mind.

What you do have in the form of basic caveman communication is a series of buttons on the touch screen. Demon’s Souls-esque emotes illustrate various feelings without being too offensive or specific.

“Over here!”, “Throw!” and other gestures can be used to great effect in helping other people solve their conundrum,  but I kind of wished for a tiny bit more as I sat there, red in the face, swearing at my 3DS due to the fact that I couldn’t specifically type “THROW THE BOMB HERE!”.

When pressed, Link chirps like in that wicked Journey game and, more often than not, I was giggling like a hyena with some of the inventive uses of these emotes. For example: Red Link throws me off an elevator onto lower ground and as he flies up into the sky, he presses the ‘thumbs-up winky-face’ button. The cheeky swine.

Each of the game’s dungeons consists of four scenarios, with the fourth usually taking the form of a boss fight incorporating the series’ familiar themes.

Once you’ve solved a particular scenario, again in a traditionally Zelda-like fashion, you’re presented with an illuminated Tri Force on the floor upon which all of you must step to proceed.

Another minute stroke of genius from Nintendo, this helps maintain a steady flow and understanding from all players as you can’t proceed alone. 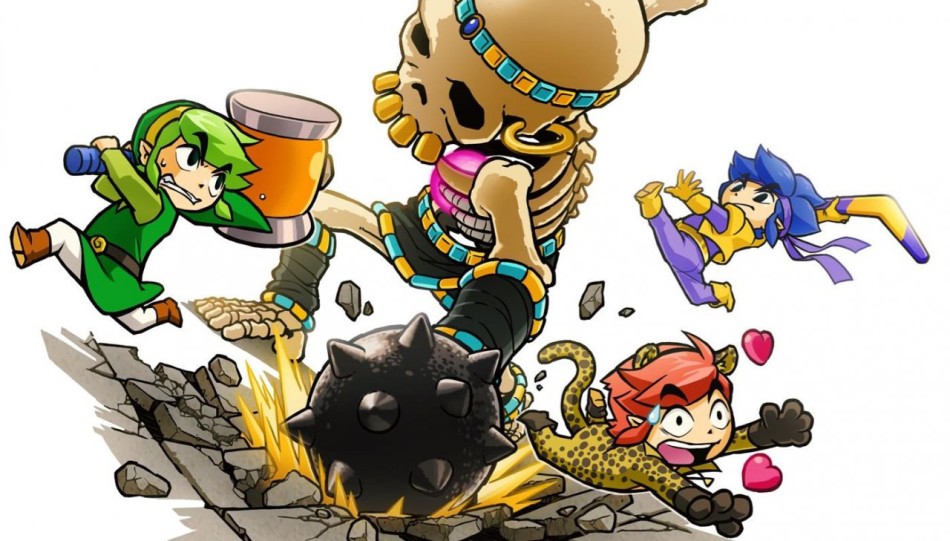 Again, for better or for worse, you can grab a Link and throw him onto the golden plates if they’ve gone to make a cuppa.

Everyone gets to choose a level in which it is placed in a roulette and chosen at random but if that choice doesn’t meet certain players expectations then be prepared to deal with some cyber-bullying.

Bombs were thrown in my face. I was grabbed and chucked off of cliffs. All because I wanted to do a particular level. It didn’t feel great to be honest and whilst I shouldn’t have been surprised, I was.

The game could have helped by offering a solution to players by searching for specific levels rather than worlds. I get it, they expected people like myself to replay levels to help others but this is planet Earth, where people can be dicks.

Removing a Link from the Four Swords Adventure series initially felt like a step backwards to me but I hadn’t anticipated that dealing with one less person would prove to be a positive experience overall.

I will head back and help fellow Links. I need to find some crafting materials after all.  New perk-imbued costumes can be made and as much as I love my ‘Tingle Tights’ – which have three balloons strapped to my bum to stop me falling off ledges – sometimes you need a costume more appropriate to the scenario. I never did want to look like an Ice Climber but in Tri Force Heroes, you can. If you’re a weirdo.

The Legend of Zelda: Tri Force Heroes may not cure my desperation for a ‘proper’ new Zelda game but let’s face it, that’ll be here before we know it.

You probably didn’t play A Link Between Worlds anyway, did you? Get on that, you heathen!*

*Apologies if you did, I love you. x