Home » The Witcher 2: Assassins of Kings

There aren’t many games out there that can claim to be adaptations of novels, or at least novels that haven’t already been adapted to film or television.

But CD Projekt RED has done exactly that by adapting Andrzej Sapkowski’s book series, The Witcher, to this medium.

The protagonist is Geralt of Rivia, a Witcher whose past is a mystery. While serving as King Foltest’s bodyguard during his military campaign, Geralt is framed for the King’s murder. While in prison, Geralt manages to convince his friend Vernon Roche to help him escape, and discover the identity of the true assassin and a much wider conspiracy.

The Witcher’s world and narrative is much more complex and morally ambiguous than most fantasy games. There is no all-powerful and evil dark lord for you to slain with little impact on your conscience. Your enemies are people, and their motivations aren’t entirely unjust. And by extension, your friends aren’t always taking actions that are in your best interests. The Witcher 2 is a mature game, and don’t just mean sexual content and violence (though it does have a lot of that.) It talks about politics, racism and the economic divide between rich and poor. The fantasy setting acts as a more comfortable environment to discuss these difficult topics, in much the same way District 9 used a Sci-Fi setting. 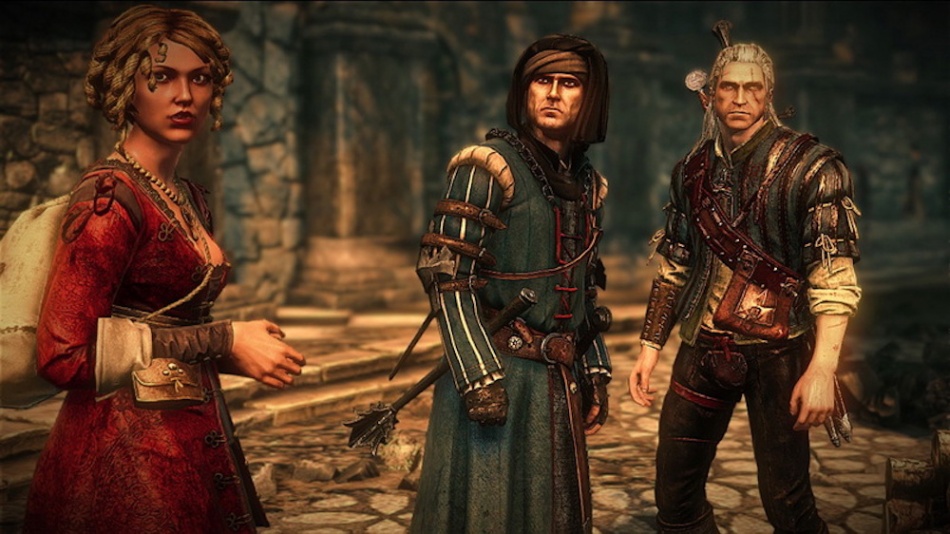 The characters you meet are all, for the most part, well written and voiced. One particular stand out is Vernon Roche, who I mentioned before. He is fiercely loyal to his country and his men, and is willing to do horrible and questionable things in order to secure the safety of both. He will test your friendship more than once.

Your actions as a player have a significant impact on the direction the story takes, and many of those choices aren’t easy to make. The Witcher 2 doesn’t have the moral choice meter that something like Mass Effect would have, and is stronger for it. The choices you make are more often than not to do with relationships you have with supporting characters, and who you choose to be loyal to. There are many cases where I was conflicted, and found myself wondering whether I did the right thing.

Structurally, The Witcher 2 is divided into 3 acts, and each act has it’s own hub that is completely open for you to explore. Much like Mass Effect, The Witcher 2’s focus is the main plot, but there are plenty of interesting side missions to complete. They vary from simply going somewhere and killing x number of enemies, to interesting little tales that last around 10 to 20 minutes. There is one very early on involving an alcoholic troll that takes some interesting turns.

At times the many different plot strings can become a tad overwhelming, especially for someone like me who only has a passing understanding of the universe. But the plot never gets too convoluted, and you eventually begin to piece together plot points and characters by yourself. 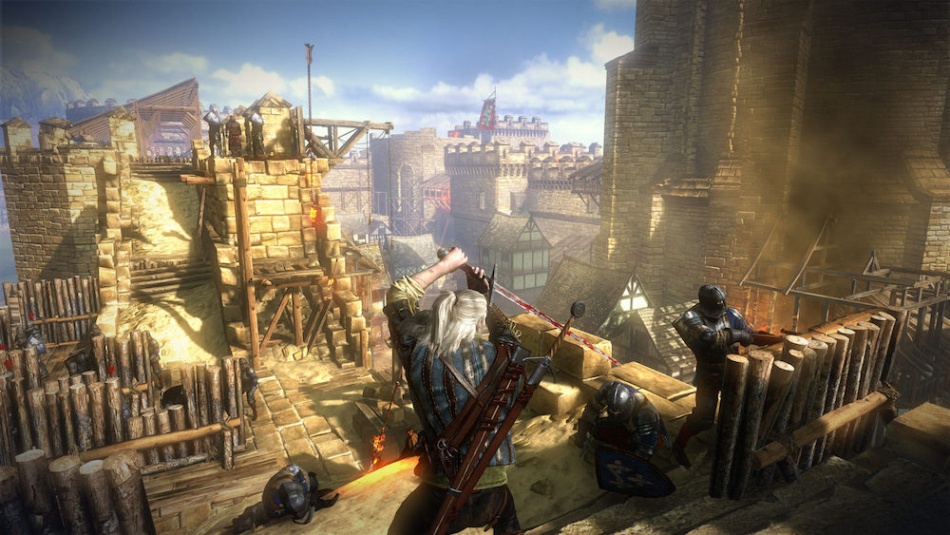 Visually The Witcher 2 is unmatched. Everything is given a lot of attention to detail, whether it’s on a micro scale like people’s cloths, or a macro scale like forests and buildings. The colours are rich and varied, and the lighting is the best I’ve seen. It is a shame then, that facial animation is so limited. Because everything else looks so great, when a character simply flaps his mouth open and closed to communicate with only very slight changes in facial expression, it takes you out of the experience.

The core mechanics of The Witcher 2’s moment to moment gameplay are quite complex, and there is a lot to get your head around. Even with the new tutorial, that didn’t exist in the original release, The Witcher 2 does a poor job of communicating exactly how to use these mechanics effectively. But this little annoyance is short lived, and you’ll soon grasp exactly what everything does and when to use them.

The Witcher 2 has all the crafting, upgrading, levelling and loot driven gameplay you’d expect from this type of game, and it handles all those RPG basics really well. But the way The Witcher series handles potions is really quite unique. In most RPGs you would have health potions and mana potions that you would use mid combat in emergencies. In The Witcher 2 you can’t take potions mid combat at all. Instead you are meant to access the enemies you are about to fight and then take certain potions with specific benefits in preparation. These benefits include, faster regenerating health, more damage, status effects, etc, etc. This stops you from simply charging towards the enemy, and forces you to stop and think. This becomes very important when the game introduces enemies such as golems and trolls into the mix. The Witcher 2 uses a clever bit of narrative context to explain why you can’t just takes hundreds of potions and become a god. These potions are actually extremely toxic and if you take too many they could harm you. It’s a shame the game doesn’t let you overdose to see what happens, but I thought it was an interesting example of the world informing the gameplay. 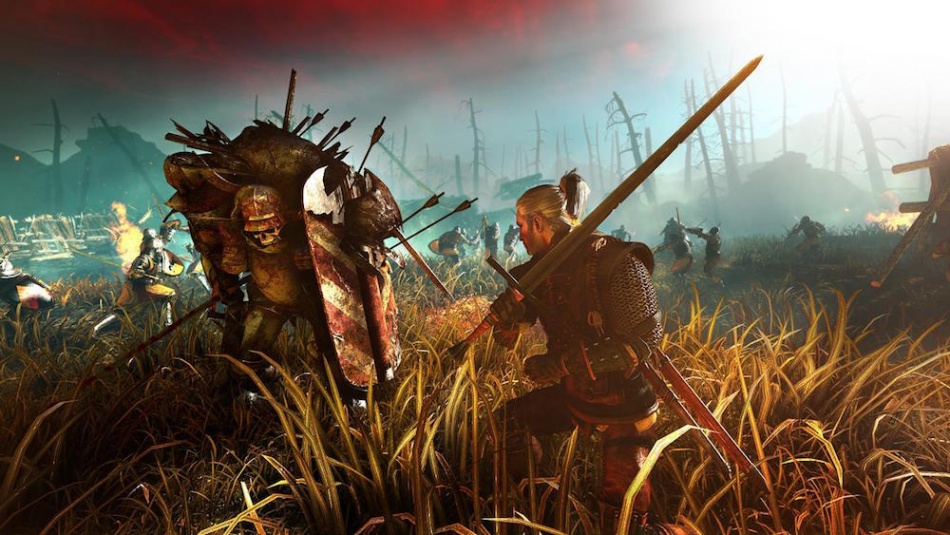 The combat in The Witcher 2 could be compared to something like Demon’s Souls, only a lot more mobile and far more forgiving. You have the traditional light and heavy attack that you can string together to form very basic combos. What is interesting is that the block button only blocks attacks in the direction you’re facing, and you still take minimal damage from a blocked attack. This means you can’t run straight into a large group of enemies and button bash. If you do that, you’ll be surrounded and die a very quick death. You have to manage the crowd, and pick off enemies one by one. You will be using the dodge button a lot, just to get some distance between you and the horde of enemies about to close in.

Magic and special items are also key to managing crowds. One of the simplest spells you have is stun, and you will find yourself using it frequently right to the very end of the game. More interesting spells include projectile fire and mind control, which are all designed around giving you some breathing room. And this extends to the additional items, such as bombs, that help separate the enemy into smaller groups.

Fights with regular enemies are challenging and rewarding throughout the campaign. But a couple of the boss encounters can be extremely frustrating.  It feels like the games mechanics aren’t suited to the demands of that situation. One in particular towards the end of the game was so frustrating, and so unclear about how I was meant to approach the encounter, I almost considered never finishing the game. I pushed through, and thankfully the game ended on a high note. It’s a shame that a game that is so consistently good in other areas, falls so flat on its face in this particular department. Thankfully, there are only two encounters like the one I mentioned above.

The Witcher 2 feels like the game the studio wanted to make, and they didn’t compromise their vision. Its story is mature in ways that is very rare for this medium, and handles difficult subject matter with care. But at times the story throws so much at you, it’s difficult to comprehend. The gameplay is rich, complex and rewarding (minus the boss battles), but the game does a poor job of educating the player. The Witcher 2 isn’t an accessible game and can be frustrating, but if you can get past that, it is a unique and highly entertaining experience.