What a curious position Andrzej Sapkowski finds himself in as an author.

Videogame adaptations of literature are pretty common, but usually the books in question already have a huge international following, and more than likely have a popular Film or TV adaptation associated with them.

Sapkowski’s novels and short stories about the monster slayer Geralt garnered a cult following in Poland and a few other eastern European countries, but were relatively unknown to the English speaking world for many, many years.

Movie and TV adaptations of Sapkowski’s work do exist. These were created by the same production team and were given the same name, The Hexer.

However, both were received very negatively, and failed to make even a ripple in wider popular culture. And of course the lack of official English translations of these books (at least until very recently) also prevented this series from taking off.

A problem which, thanks to the success of the Witcher videogames, is now slowly being addressed. That’s what’s so fascinating though.

With the Witcher III selling four million copies in the first two weeks of its release there can be no doubt that this world Sapkowski created has now reached mainstream audiences, and it’s all thanks to the third entry in CD Projekt RED’s adaptation.

I’m not saying this is unique – the Metro series is another example of a developer taking a relatively unknown piece of literature and adapting it to this medium – but that, combined with the level of success the Witcher III has been met with, makes for an intriguing statement on where we are as narrative medium. And narrative is certainly what makes the Witcher III stand out for me. 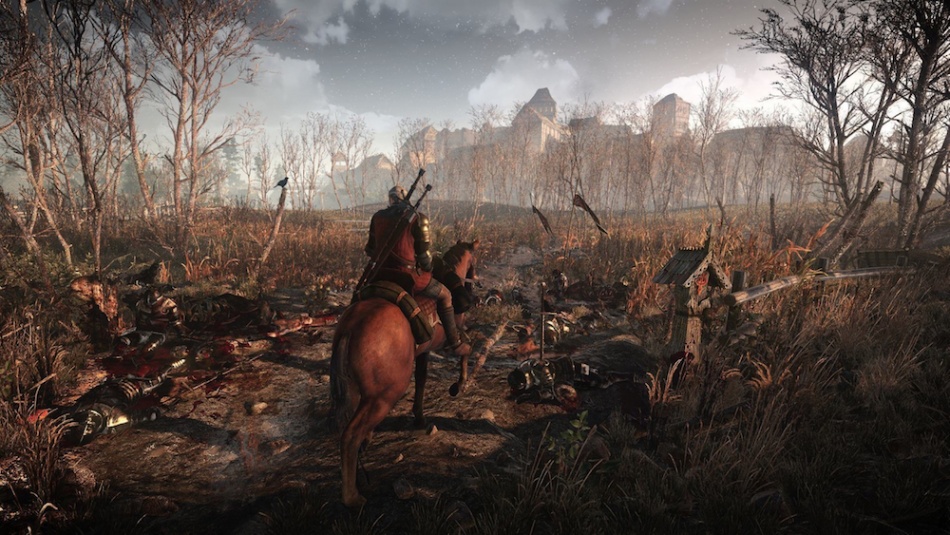 The Witcher III: Wild Hunt starts some time after the events of The Witcher 2: Assassins of Kings, and the country formerly known as Temeria finds itself in the middle of a war between two formidable leaders, Emperor Emhyr of Nilfgaard and King Radovid of Redania.

While the horrors of war rage on in the background, Geralt of Rivia is trying to track down his lost love Yennefer. However this quest is very quickly concluded and Geralt soon finds himself following the footsteps of his adopted daughter Ciri, who is being relentlessly pursued by beings from another world commonly referred to as the Wild Hunt.

I really can’t praise the writing and storytelling in the Witcher III enough. There is a novelistic density on display here that you occasionally see in the very best TV has to offer, but you almost never see in videogames.

Lots of little plot points can be set in motion that seem to have little impact in the moment, but end up having huge implications later on in the game as they all tie together and feed into and off of each other.

The decisions you make don’t just affect the outcome of the moment in question, or even just the missions and quests that directly follow it. Your choices affect quest lines that seem completely disconnected at first. 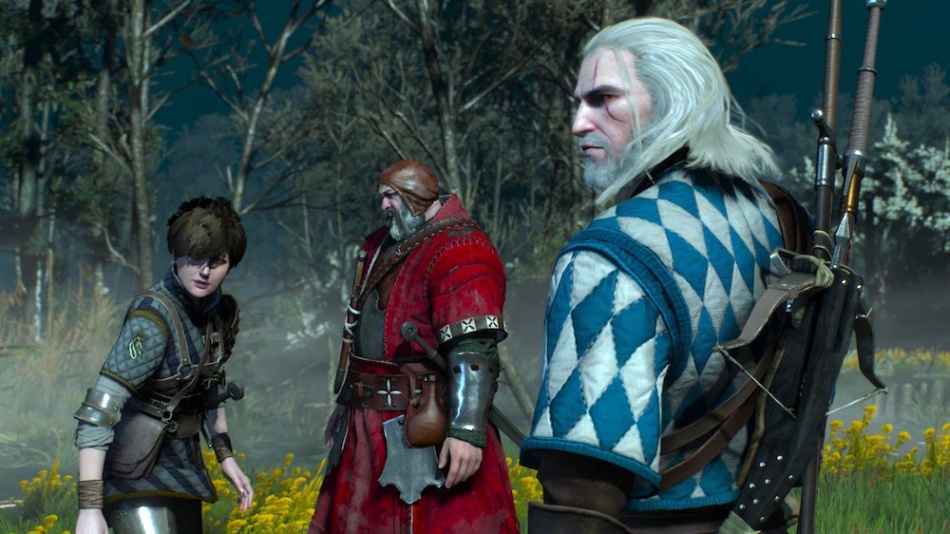 You quickly learn that in the Witcher III, nothing is isolated, and everything you do ripples outwards. These changes aren’t so huge as to dramatically shift the direction of the story.

Like all games of this nature, there’s a central narrative the game will always go back to. What I find really impressive is how neatly all these different threads tie together, making it impossible to compartmentalise different sections of the game. It’s all interconnected in meaningful ways.

The politics of this vast, open world and the interplay between characters is riveting, tense and feels effortlessly organic.

Unfortunately there are a few rare instances where the vocal performances aren’t as strong as the words they’re speaking. Dandelion stands out in this regard, as not only is the performance grating, but also out of place.

I know that it’s not entirely fair to say, “A US accent doesn’t make sense in this setting!” when it makes about as much sense to use British accents in every ancient historical setting you can think of.

That being said, it still feels alien in a world filled with broadswords and castles. All the characters with US accents that I’ve encountered were introduced in the first game, so I suspect these were decisions they decided to stick with going into the sequels. This is a shame, because in my opinion every casting choice from the Witcher 2 onwards is noticeably stronger.

That doesn’t mean I felt that all the characters with US accents deliver bad performances, Jaimi Barbakoff returns as Triss Merigold and is consistently great.

Besides, the rest of the cast more than make up for these rare poor performances. Charles Dance as Emperor Emhyr, Denise Gough as Yennefer, Katie McGuinness as Keira Metz, Mark Healy as Vernon Roche, Richard Hawley as Dijkstra and Alexander Morton as Zoltan; these performances are all stellar. 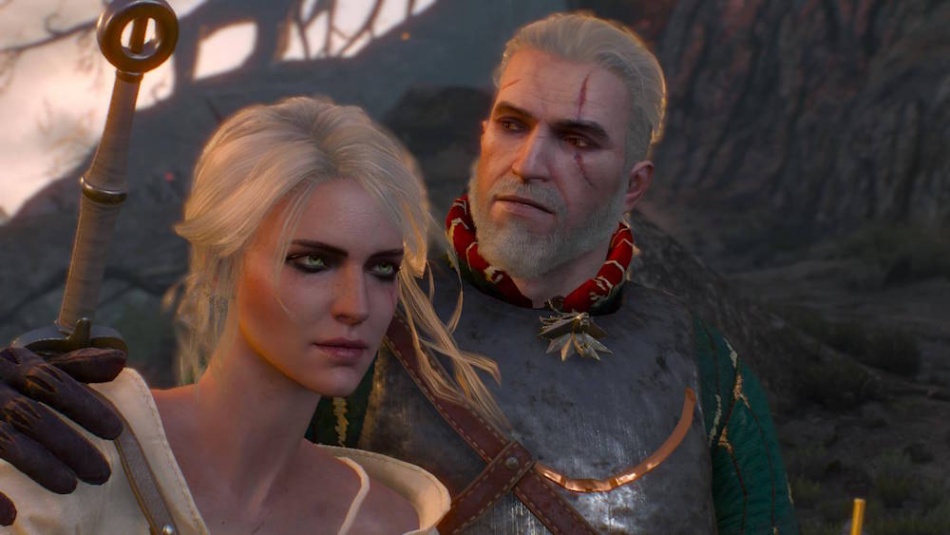 This quality of storytelling isn’t exclusive to the main plot either. What ultimately impressed me most about The Witcher III, is not only how much side content is in the game, but how much of it is worth doing.

Whether they last a minute or an hour, every side mission and witcher contract you undertake is rooted in human drama first and foremost.

They range from simple stories, such as a band of orphaned children stealing chickens to survive, to monsters spawned from human tragedy.

Despite their fantastical nature, The witcher contracts often feel like the kind of crime scene investigation you can imagine McNulty and Bunk from The Wire undertaking. In both instances, the creators allow you to piece together the story of the scene alongside the detectives, rather than showing you exactly what happened in a flashback or something of that nature.

The fight with the monsters themselves actually ended up being the least interesting aspect of these contracts for me. It was pealing back the layers of mystery and then preparing accordingly that became the primary appeal. 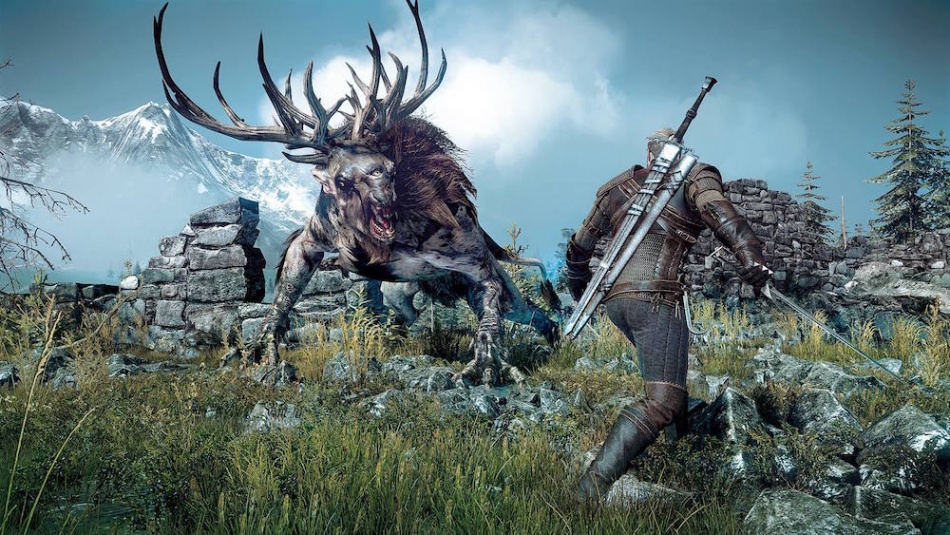 I found combat and the general feel of movement in the Witcher III to be frustrating at times, due to a lack of responsive control over Geralt and his horse Roach.

When they are working well however, the mechanics of a fight felt really satisfying to engage with. Applying potions and oils before a fight, and using specific grenades and magic to exploit enemy weaknesses makes these encounters feel quite strategic.

But every once and a while, a sword that should have been parried gets through and a successful dodge is ignored. It doesn’t happen enough to severely damage the overall experience, and I ultimately had a lot of fun during combat once I adapted, but these issues presented themselves from time to time.

Roach on the other hand is a mess, and doesn’t compare well with his horsey peers at all. It’s difficult not to bring up Agro from Shadow of the Colossus whenever a game chooses to feature a steed.

Once I got used to her distinctive canter, I felt that Agro controlled superbly as well as interacting with the world in a way that gave her life. 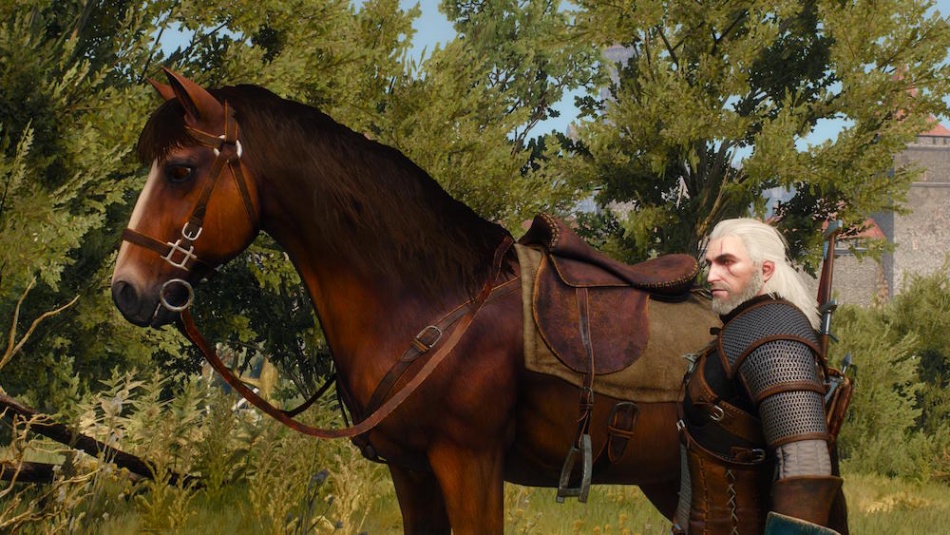 I think at some point Roach stumbled on the ability to teleport, but is convinced no one else has noticed and insists on constantly appearing behind bushes, trees and fences, most of which, he’ll almost certainly get stuck behind.

It seemed to me as though Roach had never really acquired basic motor skills… or even the fundamentals of reality that a cricket understands. Consequently, he’ll often forget that he can’t pass through solid objects. Furthermore he hates bridges. If the world wasn’t so vast, I’d have walked everywhere.

That said it’s often awfully tempting to take a break from Roach’s drama, and slowly wander through the Witcher III’s open world. The fields of Velen and the mountains of Skellige are beautiful in their simplicity. The game wisely chooses to avoid fantastical architecture or landscapes that could never exist in reality.

Everything draws from obvious real world references, and ties them together very neatly. So often what’s impressive is not how visually arresting a vista is, but how believable it is in the context of that entire landscape.

You won’t find mountains next to deserts, next to tropical jungles in the Witcher III. You could accuse it of lack of variety, but I prefer the overall benefit of naturally connecting environments, to having something radically different to look at just because.

I found that The Witcher III: Wild Hunt featured lots of tiny niggles that might hold back a lesser game. However, the things that I believe it excels at – specifically tying together gameplay and narrative – put it, in my mind, ahead of its peers.

The first time I truly realised how interconnected everything is in this game was incredible, and I can only think a few games that have done this quite as successfully.

I consider the characters and the world to be exceptionally well drawn, even in spite of the odd poor vocal performance. I even had a lot of fun with the occasionally irksome combat when the controls behaved themselves.

Honestly, I was reluctant to talk about these few shortcomings in this review, for fear that it might turn people away. CD Projekt RED’s ‘failures’ don’t dwell as long in my mind as the many facets that worked for me.

Like all the characters I encountered in this rich world, I found The Witcher III: Wild Hunt to be flawed, but also thoroughly fascinating.