I have had my eye on Thumper from the very beginning.

The premise was intriguing, even if I was nervous about how well it would be executed upon.

Created primarily by two ex-Harmonix employees, Brian Gibson and Marc Flury, the Harmonix musical legacy can be felt in every aspect of this game. Harmonix famously created the Guitar Hero and Rock Band series, and more relevantly put out the underappreciated curios FreQuency and Amplitude, which have borne a surprising crop of games in the last few years.

While Harmonix themselves continued the FreQ/litude legacy with Rock Band Blitz and the crowdfunded Amplitude reboot, the rogue designers at Drool took the basic formula and morphed it into something almost unrecognizable. Something dark, powerful, engrossing, and slightly terrifying. 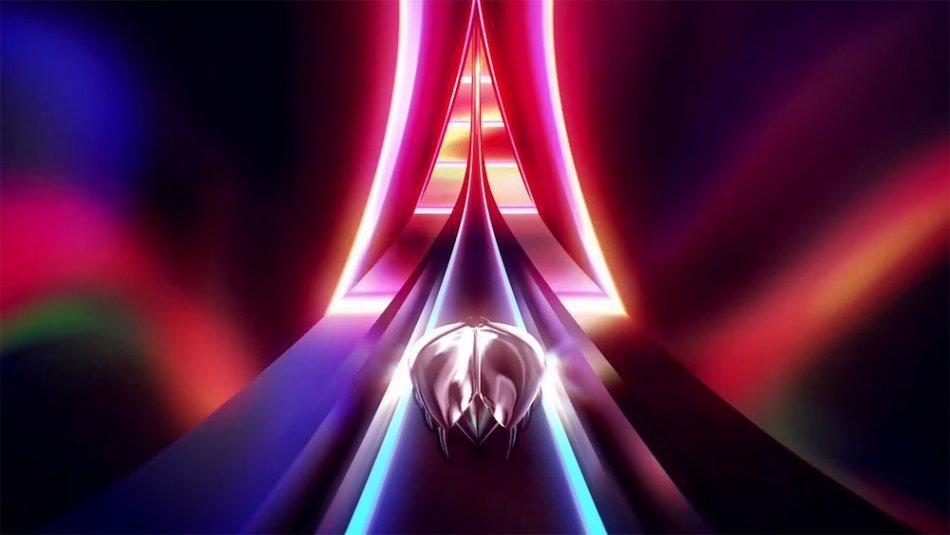 Thumper introduces itself as a ‘rhythm violence game’, a title designed to ignite curiosity rather than explain the facts.

Thumper is an enigma, and it maintains its alluring elusiveness throughout the entire experience. From the visuals to the music, all of the component pieces of the game are alien and aggressive.

Gameplay-wise, Thumper is actually quite simple. It is, perhaps, easiest to compare it to Masaya Matsuura’s Vib Ribbon for a new generation.

Players control a metallic scarab, straight off of a Journey album cover, traveling down a rollercoaster-like lane and reacting to visual and audio prompts with specific button inputs – a familiar premise for players of Amplitude and AudioSurf. Unlike those games, though, the primary objective is not collecting points, but rather surviving.

Each level introduces new hazards on the track, demanding lightning-fast reflexes to avoid or counterattack. Depending on the type of hazard, failure to react appropriately will either reset the score multiplier or break the scarab’s outer shields, leaving it open to instant death upon the player’s next mistake. 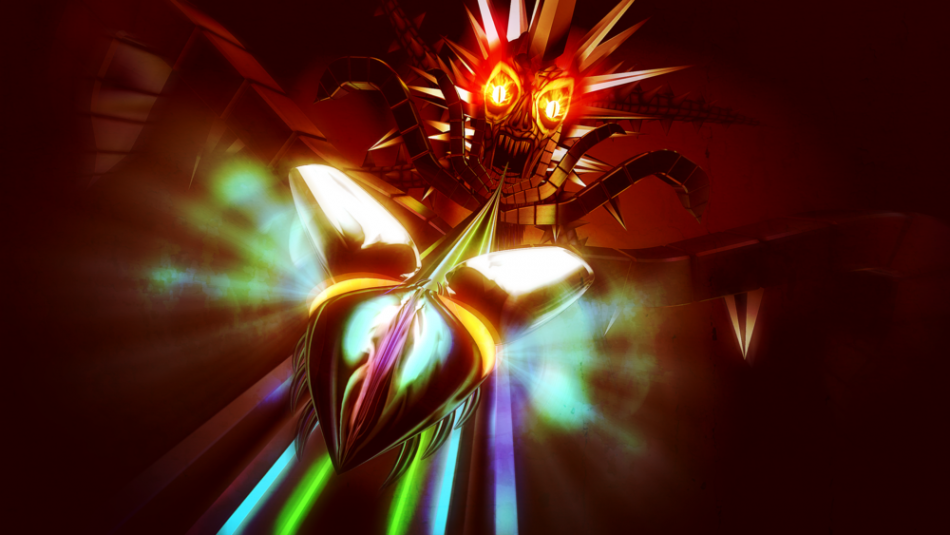 Mercifully, the timing is most often quite forgiving. Buttons can be held down well ahead of encountering the obstacle, meaning that even those without a strong sense of timing will likely have some success.

Ultimately, this is because Thumper’s core focus is not playing along with the music, as is the focus in Rock Band. Thumper is about adapting on the fly to changing scenarios and reading the screen.

The levels are broken up into sections, generously checkpointed, which means that it is not necessary to perform a perfect run through a level to achieve a high score. Instead, it encourages mastery of small portions of the level at a time. Even in the hardest sections, I was able to gain the muscle memory to navigate my scarab to safety.

Due to the discrete partitioning between checkpointed segments, the game’s ‘levels’ are more like chapters, or, to put it in musical terms, symphonies broken up into movements. The musical continuity and thematic resonance ties each segment into something greater, even though segments can be individually repeated ad infinitum. 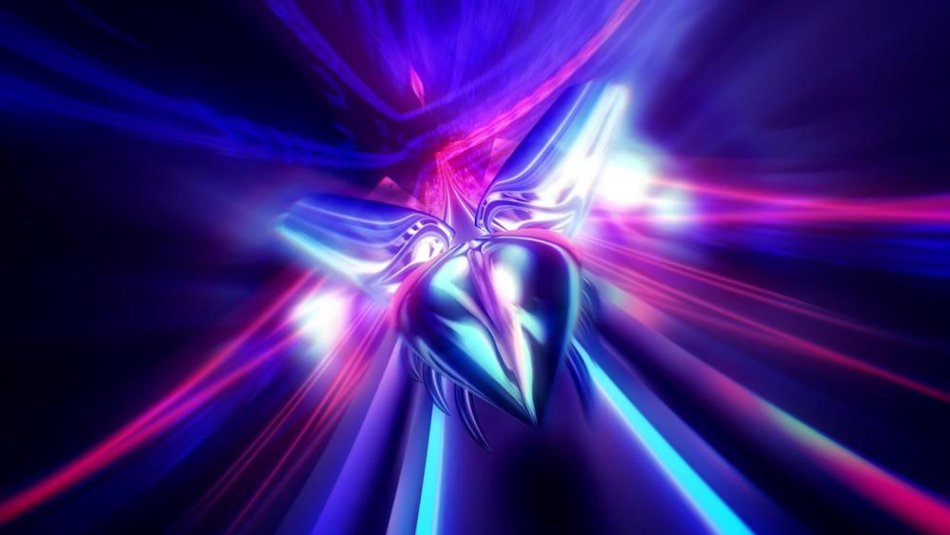 The greatest criticism I have for the game is that the levels do not feel as different from one another as they could.

While a consistency of tone contributes to a honed experience, and consistency in graphical presentation makes visual cues immediately readable from level to level, a degree of visual or musical distinctiveness would have helped differentiate the levels from one another.

As is, the levels serve as more of a “difficulty” differential than providing truly unique experiences, which is a bit disappointing considering that Gibson and Flury formerly worked on The Beatles: Rock Band, which made great use of visual distinctiveness from song to song.

As is, I was never left wondering what was coming next. I was always driven to continue, as I very much enjoyed the gameplay, but it was not out of curiosity to see something new. Particularly, it felt a bit disappointing to see the end-of-level bosses repeated from level to level.

The soundtrack, while not immensely distinctive, is aggressive, dark, ambient music that compliments the gameplay perfectly.

It is not as integral to the experience as the music in Amplitude or Rock Band, as players are not tasked with reproducing the music or playing along with it, note-for-note. It serves mostly to set the tone and provide the occasional timing cue. Sometimes the action is timed in such a way that it complements the beat of the music, but Thumper is more interested in keeping its gameplay unpredictable than lining up musical patterns. 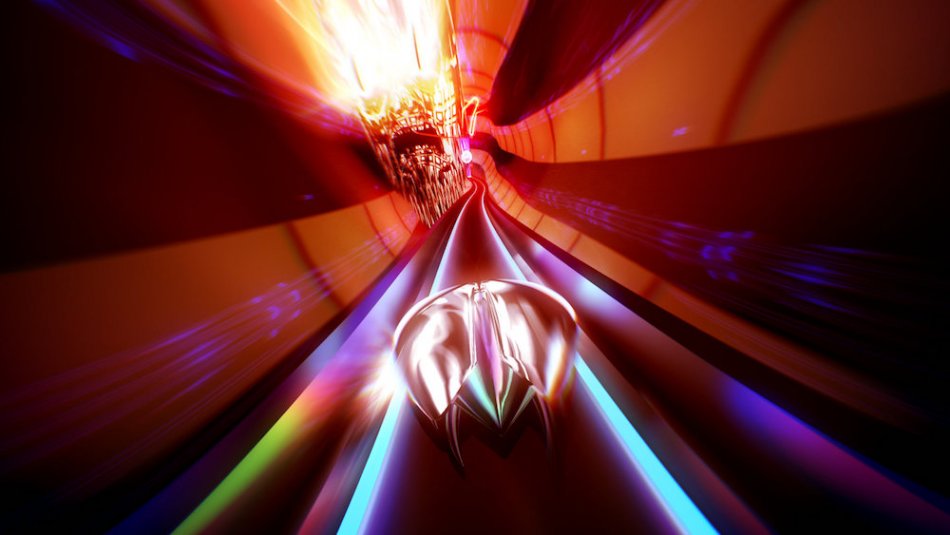 Ultimately, the soundtrack draws the player into the experience by intelligently ramping the urgency and intensity up and down to correspond with gameplay peaks and troughs. The music, in that way, perfectly aligns itself with the emotional arc of each level, and it becomes immediately engrossing and all-consuming.

Thumper is at its best when it is given a mainline connection to the player’s brain. The game is almost not even worth playing without powerful, bass-heavy headphones, the difference is that immense.

Furthermore, while I do not own a VR headset and, thus, did not use one for my playthrough, I have played Thumper using the PSVR twice before at tradeshows, and it feels to me like the optimum experience.

While it doesn’t make heavy use of VR’s ability to look around or fully immerse in a world, it further removes all other outside visual stimuli and fully focuses the player’s attention on the action. I felt VR’s absence, playing through Thumper, more than I have for any other game I’ve yet played.

Overall, Thumper is a difficult and intense experience. Every aspect of its design, from the visuals to the soundtrack, continually increase the player’s adrenaline, leading to a game best played in short, intense sessions.

Though its levels could be more individually memorable by being more visually and musically distinct from one another, it delivers a tight and, as a whole, memorable experience.

Thumper is highly recommended for music and game fans alike, and its generous checkpointing and forgiveness for timing make it accessible even for those without a strong sense of rhythm.