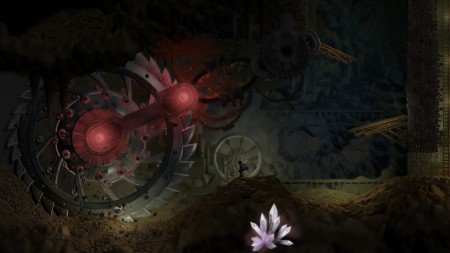 It’s incredible just how big the indie games scene is becoming, or has become, depending upon which side of the non-existent videogaming fence you are sitting. On one hand, indie games are breaking one million sales and a ground-breaking movie based on the games and their developers’ lives is on the way in 2012. This really feels like the year of the indie game, and it starts off with Vessel, a puzzle platformer from Strange Loop Games.

It starts off with a quick swoop round a laboratory showing you a series of framed pictures featuring your nameless protaganist and some strange, brand new creatures which are soon to be revealed as Fluros, thanks to a handy journal entry such as you can expect after every significant event. This subtle, short opening let’s you know what has been happening in this chap’s life prior to this event and from here on out you are in direct control. Vessel instantly reminds me of both Braid and Limbo, two other impressive 2D platform puzzle games and this can only be a good thing, right? 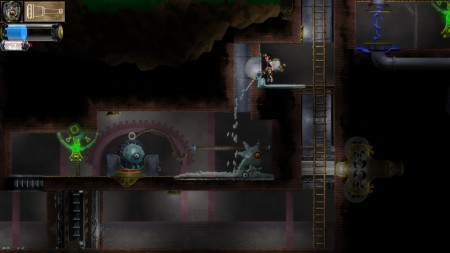 Primarily, Vessel is a puzzle platform game with very impressive water physics ensuring that everything flows smoothly, no pun intended. The act of running against a torrent of water really feels like you are being pushed back by pure force and stepping on an open valve creates pressure making the water spray everywhere as if you were holding the end of a hosepipe. All these little details ensure that the game is completely engrossing.

Your character journals his experiences with the Fluros as he learns their behaviour and becomes their puppeteer by using the essence of a Fluro, known as a Seed to create many Fluro types and use them to his advantage to ultimately understand what’s happening around him. Progression through the game is well paced until the the final chapter where it falters slightly, it’s an incredible shame to see the quality dip at the final hurdle and somewhat pulls you out of the experience.

The game is split up into three main sections, each with a similar theme: activate a certain number of machines to open blast doors in order to proceed to the final area and fight the evil within which is preventing the area from it’s normal day-to-day activity. 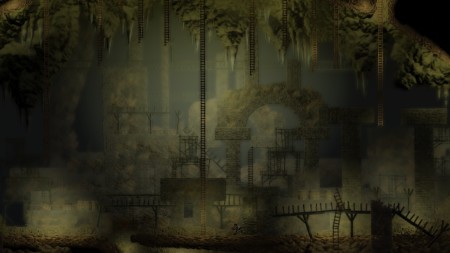 While plundering each of these areas you’re presented with puzzles which are just as satisfying as Portal’s to solve. There is definitely that “Ah-ha!” moment in Vessel and while it doesn’t ever make you feel quite as clever as Portal at its best there is much satisfaction to be had.

Exploration and surprise are what keeps this game entertaining, throwing in new things to mess around with, such as a backpack to truly manipulate water, Mario Sunshine style, and other colour-based fluids. Each fluid type has its own unique element for you to experiment with, even if that means dying in the process of figuring it out. Thankfully check-points are frequent, giving you that urge to give it “Just one more try” after a failure.

If however, you decide that a particular puzzle is too taxing for your brain you can follow the arrows and head to the next one, ensuring that you’re never truly stuck. There were times aplenty I had left ‘Room 2’ because I really couldn’t figure it out and after finishing up to ‘Room 5’ I came back using the handy fast travel mechanic to the previously tricky puzzle.

If you finish an area with, for example, only seven of eight puzzles solved you will miss out on some important white fluid, or experience, which let’s you upgrade your water pack for extra capacity, better range on the hose or whatever you desire. The upgrade system is fun in a Wallace and Gromit kind of way but it isn’t always entirely clear what you’re getting into from the visual keys it gives you. So it’s a bit of a gamble, but happily a bad choice won’t stop you from finishing the game. Vessel’s design pulls you through and you never regret a single minute spent staring at your monitor as it zooms out and shows you one of the most intimdiating puzzles you’ve ever seen in two dimensions.

Further parallels with Valve’s aforementioned first-person masterpiece are evident from the satisfaction of solving a puzzle to the slow build up in music as you progress your way through a conundrum. It’s a fantastic touch from Valve’s sequel which constantly provides feedback to the player without shoving numbers on the screen. 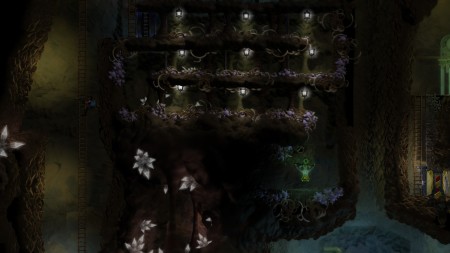 Via an Xbox 360 controller is the best way to play, and the game even lets you know this through its in-game art: pulling levers and turning knobs with a cross-headed screw which is blue, or the X button to me and you. The heavy physics model in the game, while great for the fluidity of the water, can occasionally put you in some tricky platforming predicaments and playing with a keyboard and mouse only aggravates these issues, so plug in that pad.

Vessel reminds me, in a good way, of playing a game back on the Spectrum or Amiga. A game which leaves you alone for the most part and demands you solve the puzzle on screen without little to no help other than a brief piece of text to prod you in the right direction, and that is definitely an amazing thing. A thing we see so little of these days with literal blue flashing arrows on the floor showing you where to go and tool-tips reminding you that you can reload when behind cover.

With an art style very reminiscent of Ubisoft’s Axel and Pixel and Terry Gilliam’s Monty Python animations, along with a soundtrack to die for, there is simply no excuse not to pick Vessel up. It really is worth it.