Lately I’ve been thinking a lot about Metal Gear Solid V: The Phantom Pain (MGSV), more than I usually do. It’s occupying much of my free thinking time.

With 162 hours on the in-game clock and 75% completion I do the most logical thing, I start playing Watch Dogs 2. I found the original Chicago-set hackathon from Ubisoft to be a very enjoyable experience. Despite the controversy surrounding its apparent visual downgrade, the game provided me tens of hours of fun and a shiny Platinum Trophy to boot. 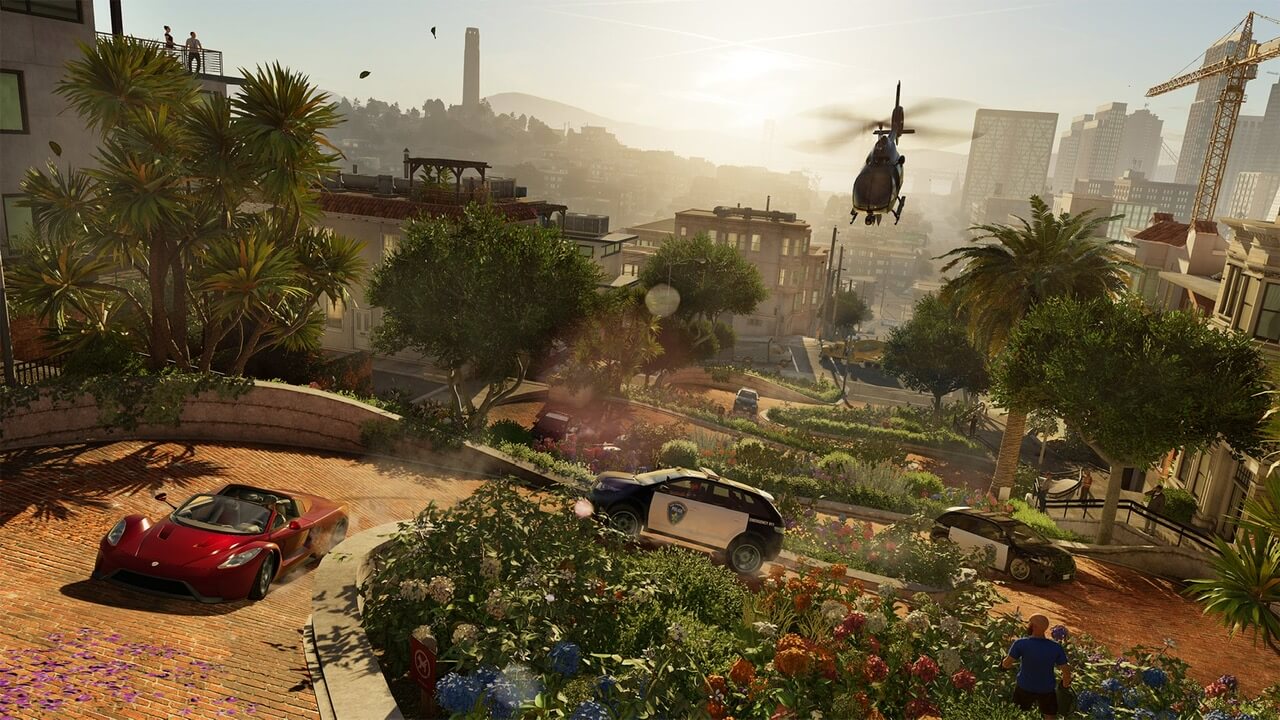 In Watch Dogs 2, the action moves to a new city with a new protagonist. The game’s colour palette sees a major overhaul, with the somewhat drab and dreary tones of Chicago replaced with the technicolor triumph that is San Francisco. It is the gaming equivalent of Dorothy entering the door in to the Land of Oz.

Our new hero Marcus is a cheeky hacker chappy with some nifty parkour skills and an endless stream of pop culture utterances to boot. Who in 2019 doesn’t remember the Los Locos song from Short Circuit 2? Just me? Oh dear, I’m showing my age.

The game features a narrative that progresses naturally, despite the open world setting. In short; big bad corporations doing big bad things on one side, with Marcus and his trusty hacker crew on the other looking to save the day.

It’s hardly original but it’s simple structure doesn’t get lost with the distractions of the open world setting. Typically games of this ilk can suffer from poor pacing, but not Watch Dogs 2.

In the case of MGSV, the principle theme of revenge following the exploits of Skullface in (standalone prequel) Ground Zeroes is hampered with the numerous subplots that Kojima throws at the player. The appearance of The Man on Fire (Volgin from Metal Gear Solid 3: Snake Eater) and Eli (young Liquid Snake) create two such, that on the one hand have no tangible context (The Man on Fire) unless you have played Metal Gear Solid 3 and are introduced (Eli) without resolution.

As a longtime fan of the series with a history of both characters I was left feeling cold when they no longer were part of the games plot development. In Watch Dogs 2 core story missions and optional side missions all feed into the broader narrative of the world.

MGSV is the first time that the Metal Gear Solid series ditches linearity and carefully curated design principles of past titles in favour of an open world approach. It was a bold move for a team who built their reputation on considered curation and it the leap into the unknown exposed a weakness in their design.

The two ‘open worlds’ are set in Afghanistan and along the Angola-Zaire border region. They can’t really be considered open worlds so much as they are large levels. Both areas feature settlements and buildings with detailed interior environments. The landscapes are desolate with little to interact with and little to do.

I don’t expect to see Snake entering various races or fishing, but could certain typical open world tropes have improved things in the case of MGSV?

What if Snake had liberated a village or settlement from enemy control? His actions and interactions with inhabitants of the environment could have allowed Snake to gather information to aid his overall quest and create a tangible link between the world and the player. His actions within the world could have led to a more emergent narrative allowing players to have a unique story experience like Telltale Games or Netflix’s Bandersnatch.

Another benefit from this component would be in relation to the games hidden karma system, aka the ‘Demon System’. Your in-game actions; killing enemies, harming animals or developing nuclear weapons manifest with the increase (or decrease) of the shrapnel ‘horn’ sticking out of Snake’s head. This key game feature is never explained another example of the game’s inability to embrace the basics. 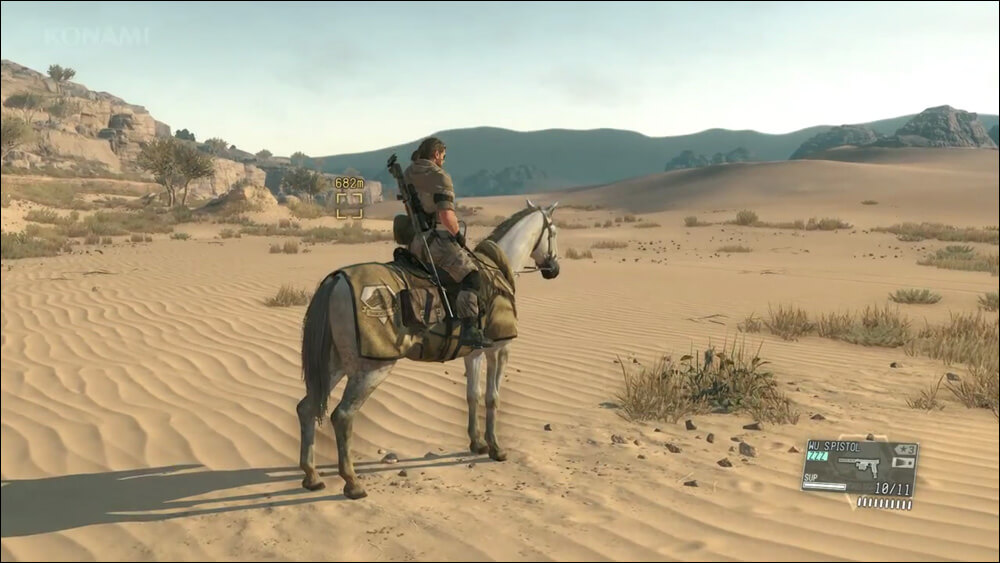 I don’t believe that the empty and featureless landscapes of Afghanistan and Angola-Zaire tie into the subject of emptiness that is often attributed to the ‘phantom’ element of the game’s title. To me they are evidence that the Kojima Productions team were not sufficiently experienced in non-linear approach, failing to strike a balance between the key ingredients required in successful open world design; of exploration and opportunity.

Watch Dogs 2 on the other hand is a game that truly understands its open world setting. The city of San Francisco and its surrounding environs are fully exploitable to the player. Not only is environment hackable with Marcus’ phone taking control of traffic lights, bollards and even vehicles to cause havoc and distraction, but his hacking skills can interact with members of the public.

The game expands on the mechanics of Watch Dogs with a new addition; the ability to create conflict between gangs and the police. Need to get into a heavily patrolled area? Simply use your phone and call it in. Marcus can plant false evidence or identify someone as a traitor to have a gang attack a rival gang or the police. This will lead to both groups going to battle with one another whether it is to take out the traitor or arrest a corrupt officer. Marcus uses his tech safely and remotely while the chaos unfolds, before swooping in to complete his mission with minimal fuss.

The game’s upgrade system allows you to improve Marcus’ skillset to take full control of the open world. The upgrade tree allows you to create a snowball effect with the deep hacking mechanic, creating chaos throughout San Francisco or multiple hacking strands turning gangs and cops against each other in a seemingly never ending loop.

This mechanic is an excellent design decision allowing the player to change the way a mission can evolve and how the player can interact with the world. Despite the extensive range of available weapons to Marcus, I chose to play my campaign as someone who would shy away from the direct use of violence instead relying on the tech to do most of the heavy lifting. This allowed me to peruse a more peaceful approach for Marcus, and allowed me to adhere to my own karma system. 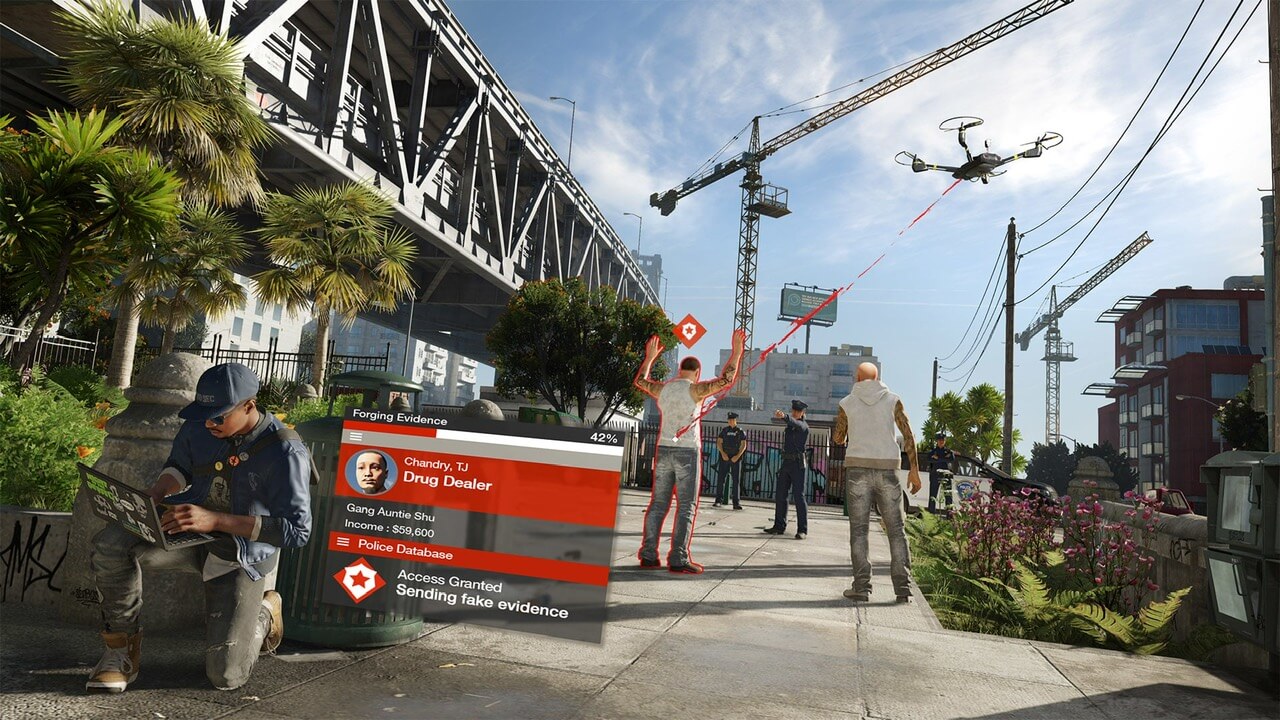 Should you wish to pursue a more direct approach to missions, you can of course use weapons to do so. The weapons can be created at your various hacker safe houses with the use of 3D printer, with your new fully customisable weapon available, seconds after you choose to create it.

MGSV also allows you to create new weapons through your research and development team on Mother Base, but unlike the instant gratification of Watch Dogs 2 the game makes you wait for your latest upgrade in real time.

Aside from weapons Marcus has other tools at his disposal. His remote control car and drone can also give you a stealthy approach and reconnaissance advantage. Tools in MGSV like the Walker Gear allow rapid transition across the desolate landscape reducing the overall pain in the player’s proverbial ass.

The infamous Battle Tank is so unworkable that Kojima and co leave it unfinished (like much of the game) in a Mother Base hanger never to be directly controlled by the player. 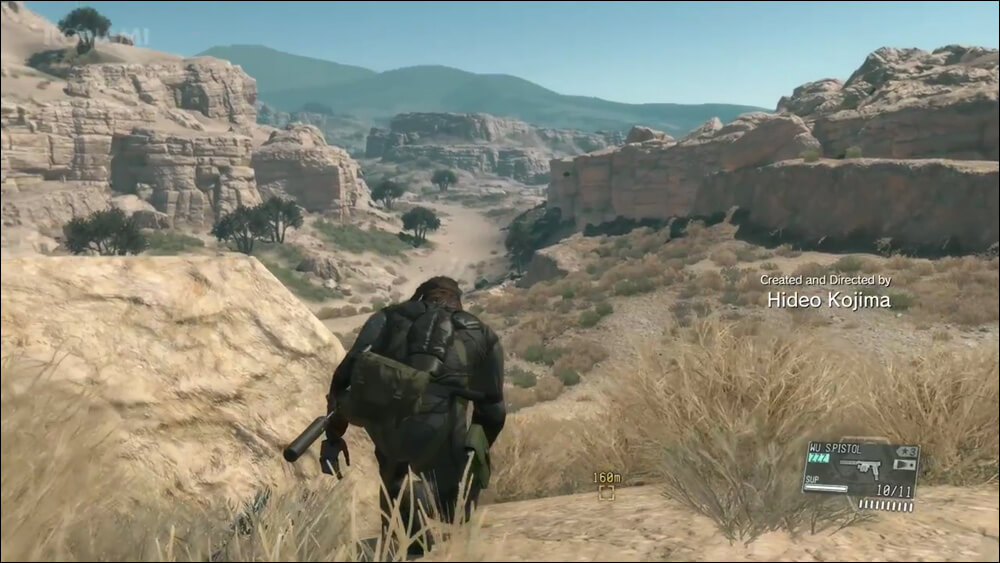 Playing Metal Gear Solid V in the wake of Watch Dogs 2, my feelings towards the former are less favourable. Whether it is design decisions that Kojima and co opted for from the open world approach, the poorly paced narrative, a number of unexplained gameplay features, the pointless episodic structure and the unfinished state of the game, it is a sad end to the Metal Gear Solid series.

On the flip side, Watch Dogs 2 with its refined gameplay mechanics, upbeat characters, lively setting and an open world ripe for interacting with results in game so incredibly open-ended you can reply the same mission over with different strategies every time. You can opt to sneak into areas using non-lethal takedowns, or a full-on shoot-em-up approach with assistance from your jumper or drone buddies make me believe that Watch Dogs 2 is the game Metal Gear Solid V: The Phantom Pain wishes it could have been.

The leap in quality from the original Watch Dogs to the sequel is self evident, much like the leap between the first and second Assassin’s Creed games. I do hope that Ubisoft have faith in this series and continue to build on the creditable foundations that Watch Dogs 2 has established.

I would encourage those of you who have yet to play Watch Dogs 2 to do so, you might even find yourself quoting Metal Gear as you do: Hey, Watch Dogs 2, you’re pretty good.