The idea for Battle Princess Madelyn came about because its head of development, Christopher Obritsch, loved playing Ghouls ’n Ghosts while his daughter Maddi watched. And when she told him she wanted to be in the game, he replied that he could do her one better and make a new game for her, in which she would be the heroic knight.

And so, in 2017, after an arduously achieved completion of a prototype, a successful Kickstarter was born for what Chris’ newly formed Causal Bit Games billed as a spiritual successor to Capcom’s Makaimura series.

The final release of Battle Princess Madelyn has recently been made available and being that I’ve spent significant time with both Ghosts ’n Goblins and Ghouls ’n Ghosts for the Cane and Rinse podcast last year and got very familiar with their inner workings, I was eager to get hands on with this passion project, to see how it would stack up to the legendary arcade platformers in which footsteps it’s bravely following. Let’s get into it!

Right from jump, the love that has gone into Battle Princess Madelyn is extremely apparent, specifically the love of family and family pets – more on that later – and the love for Ghouls ’n Ghosts and some of its more or less contemporary fellow arcade games.

Hero Madelyn’s animation cycles, walking and climbing speed and jumping trajectory closely replicate those of GnG’s Sir Arthur and the detailed sprite work that makes up environments and the enemies and NPCs that populate them is luscious and filled with references to the games of the Makaimura lineage and beyond, such as Wonder Boy III: The Dragon’s Trap and even Capcom’s Black Tiger coin-op.

It all sits somewhere comfortably in between Ghouls ’n Ghosts and its console-exclusive sequel Super Ghouls ’n Ghosts in terms of looks, though it must be said that Battle Princess Madelyn’s visual presentation lacks the overarching consistent monster and character design of both those titles. Topping it off, effective post processing and lighting and advanced weather effects visually transport the game to 2018 and the original soundtrack is both catchy and melancholic, be it in its selectable chiptune or orchestral form.

Adding to more positive initial impressions is that with Battle Princess Madelyn you essentially get two distinctly different games for the price of one. Arcade Mode, which has been moved to the top of the title screen menu in an early patch, condenses story elements and gives you seven linear obstacle course-like stages in seven different environments, playing out similar to the GnG games, be it that you’re mercifully not required to clear two loops of the game to see the mode to completion.

Story mode opens up with animated cutscenes in which a bed-stricken Madelyn gets read a story by her granddad about a princess who goes by the same name, training to be a knight in order to save her lands and people from an evil wizard and his foul magic. This then leads into a full-on, multidirectional scrolling exploration based platformer a la the Monster World games, that has you talk to NPCs, complete side quests and unlock character upgrades for yourself and the spirit of your murdered dog Fritzy, in order to open up more areas and reach the game’s final boss. Sometimes you’re even aided by a veteran knight who bears more than a passing resemblance to the man reading the story and who is, quite naturally, the princess’ grandfather. 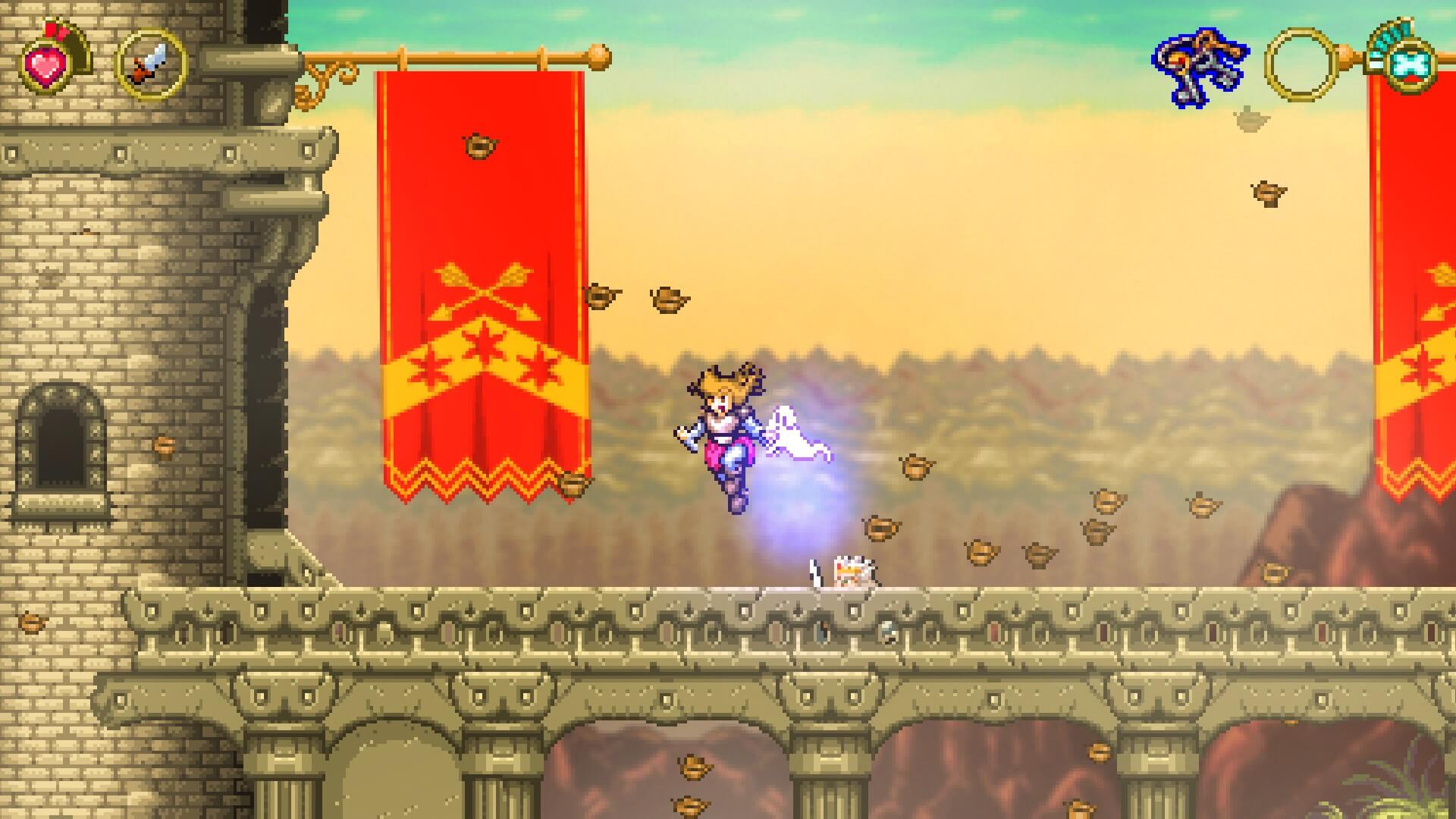 It’s in Story Mode that Battle Princess Madelyn’s problems become apparent the quickest. The general lack of direction on where to go, which Causal Bit Games have been diligently working on to fix in several updates, and the omission of a map is one thing, but I think the bigger problem – and one that’s shared by many other ‘lesser’ games in the ‘Metroidvania’ genre – is that it’s just not very fun to explore the reaches of Madelyn’s world.

In Battle Princess Madelyn’s case specifically, the issues are reminiscent of 16-bit Western-developed platformers of the earlier 1990s; think games like Wayne’s World that scroll in all directions, with seemingly endlessly repeated assets or tile sets. The environments in Battle Princess Madelyn definitely feel spread out too thin in Story Mode, with maps that lack much in the vein of distinguishing landmarks and that have you you plod on to cover the direction you picked to explore, fighting the same enemy arrangements in pretty much the same way until you reach your short term
goal or a dead end.

With the moment-to-moment wearing out its welcome too quickly, the payoff of going through it isn’t rewarding enough and the lack of a payoff, should you have wandered off in the wrong direction, is a real killer. This lead me to burn out on Story Mode already quite early in. I find this quite unfortunate, because the idea of a platforming action adventure game with the mechanics and charming and spooky style of Ghouls’n Ghosts has a lot of potential.

Luckily, there’s still the Arcade Mode, which handily side steps the issues of direction and the underwhelming and fatiguing exploration aspect of Story Mode, with its more concise and concentrated approach. The linear routes quickly lead you to the end of a level where you beat the boss and move on
to the next environment, promising a more fast paced variety of sights and sounds. And while Arcade Mode foregoes the collecting of multiple weapons and makes you replace one weapon pick-up with another like how it was in the Makaimura games, you start out with upgrades like the double jump and the possibility to pick up the hit points and weapon power enhancing armours right from the beginning. 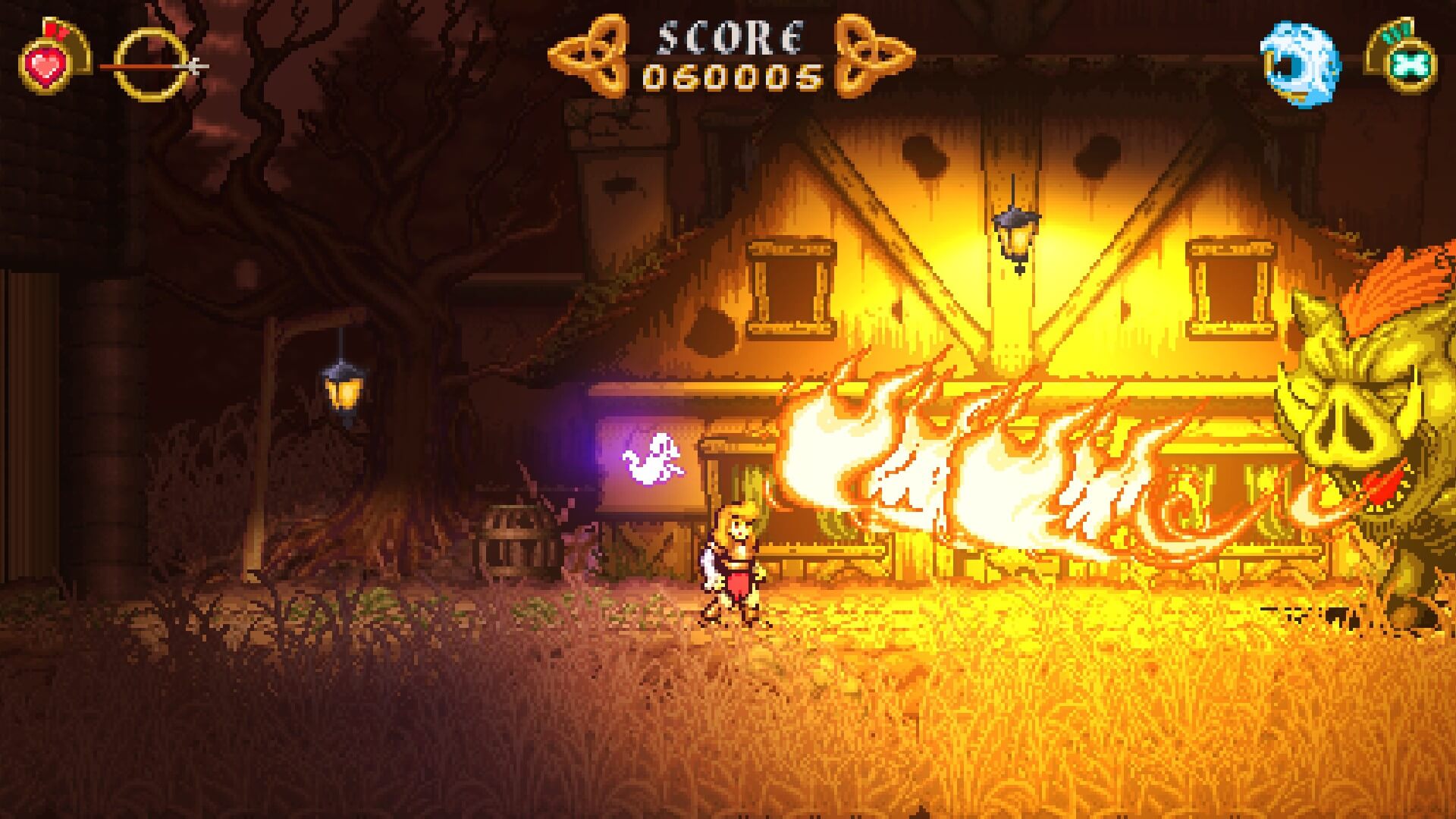 Speaking of the double jump, how liberating is it that Battle Princess Madelyn combines both that ability and the ability to fire upwards and down in one single game, as opposed to Ghouls ’n Ghosts and Super
Ghouls ’n Ghosts, that both chose one at the cost of the other?

Another thing you start out with in Arcade Mode is the ability to charge up Fritzy – though you lack his plasma firing powers – and sick him on enemies, but be careful with that, because his magic meter is also used to resurrect yourself at the last safe spot before you died and you need to keep slaying enemies and collect their souls to refill it. As an aside, I find this a neat little system that makes Battle Princess Madelyn a ton more approachable than the Makaimura games ever were, but it was Ghouls ’n Ghosts aficionado One Credit Classics’ Ben Cartlidge who pointed out to me that in the context of Arcade Mode it also facilitates bad decision making, in that it gives you little pause to consider your actions and tactics and make adjustments or do a fresh retake.

Unfortunately, Arcade Mode is not without a real major issue all of its own, though no doubt related to the main problem of Story Mode: the level layouts and enemy placements come across as fairly haphazard and a fair chunk of its challenge does not come from diabolically devised obstacle
combinations, but from a general lack of care for, or perhaps understanding of, what makes up strong 2D platforming level design. I made a video to illustrate this particular point, which you can watch below.

So what you get is a lot of leaps of faith, odd little dead ends and red herrings and elements that don’t seem to fulfill any function whatsoever. I don’t want to repeat too many of the things I point out in the video, but I think that part of what causes this problem is that the levels were probably retooled from the environments in Story Mode and scroll further than they should and contain legacy elements.

It’s interesting to me that playing through Battle Princess Madelyn’s Arcade Mode made me appreciate the genius of Ghouls ’n Ghosts and its level design more than I ever had before. Unlike in Madelyn, there is very little repetition in it. Every stage contains two or sometimes even three visually distinct environments and it throws a new and fresh challenge at you around every corner, whereas, Madelyn has you do similar things throughout the game and makes you fight a lot of the same arrangements of enemies over and over again. And Ghouls ’n Ghosts was made before game design theory was being taught in courses and classes.

There are some other nitpicks with Arcade Mode as well, like how there’s no way to end a run other than pausing the game and exiting to the title screen and how the high score isn’t saved or displayed anywhere. These are minor issues that can be patched, however. The larger problems of Battle Princess Madelyn, namely that of its map and level designs, exist on a fundamental level and are much harder to correct, save for with a complete overhaul. I feel that that’s such a shame, as this whole project really has its heart in the right place and has such a lovely, human story behind it.

Christopher Obritsch is without a doubt a very talented sprite artist and he also got the right people to work on the soundtrack for the game. I hope Battle Princess Madelyn does well and gets a sequel and I also hope that Causal Bit Games will bring a specialised level designer on board for that project, next time around.