I love videogames. That much is no secret.

I play, analyze, podcast, and write about videogames week after week. There is an aspect of the hobby, though, that is a bit draining, though. With few exceptions, videogames are created to challenge the player.

Videogames are meant to be conquered. Overcome. In a way, videogames position themselves as being strictly adversarial in regards to the player.

That is not meant as a criticism, as overcoming challenge is one of the most naturally rewarding activities that we can participate in. We are evolutionarily hardwired to feel great when we circumvent defiant obstacles.

It does serve to highlight standout examples, though, of games that don’t necessarily follow this mold. Games that, instead of competing against the player, simply wish to play with the player, as do children sharing toys.

One such game is Harmonix’s largely ignored 2014 Kinect title Fantasia: Music Evolved. Based on the Fantasia films created by Disney, Music Evolved accentuates Harmonix’s strengths as the go-to developer for music-based videogames.

To review the game in as few words as possible, it is magical. For somewhat deeper analysis, read on…

I first became aware of the game at a party hosted by Double Fine at Seattle’s Hard Rock Café after PAX one evening. Tim Schafer and his band of developers had the entire second floor of the restaurant booked, and the room was packed with people drinking, socializing, and trying to catch quick conversations with Tim or Ron Gilbert, who were circulating through the room.

The room was loud and packed full by the time that I arrived. I was happy to float anywhere that the ebb and flow of the crowd pushed me. Above the heads of the excited PAX-goers, though, I spied a projector screen at the front of the room with an odd visualizer playing.

There were people, some attendees and some Double Fine employees, dancing in front of the screen, though the game behind them wasn’t the usual Dance Central or Just Dance fare that I had come to expect Kinect games to be.

I watched it, transfixed by what seemed like a completely novel and mesmerizing game. The kind of game that I was surprised I had never seen before. Seeing that game is what really put the idea in my head that I needed to get an Xbox One, even though I originally bought mine without a Kinect. That game has been eating away at my mind since I saw it that day, and I’m thrilled to finally have the chance to play it in my own home.

Fantasia: Music Evolved is like a halfway point between Kinect dancing games, more traditional Rock Band fare, and those very difficult-looking Japanese rhythm games that have been recently picking up steam in the west (i.e., Gitaroo Man, the Hatsune Miku games, etc.). 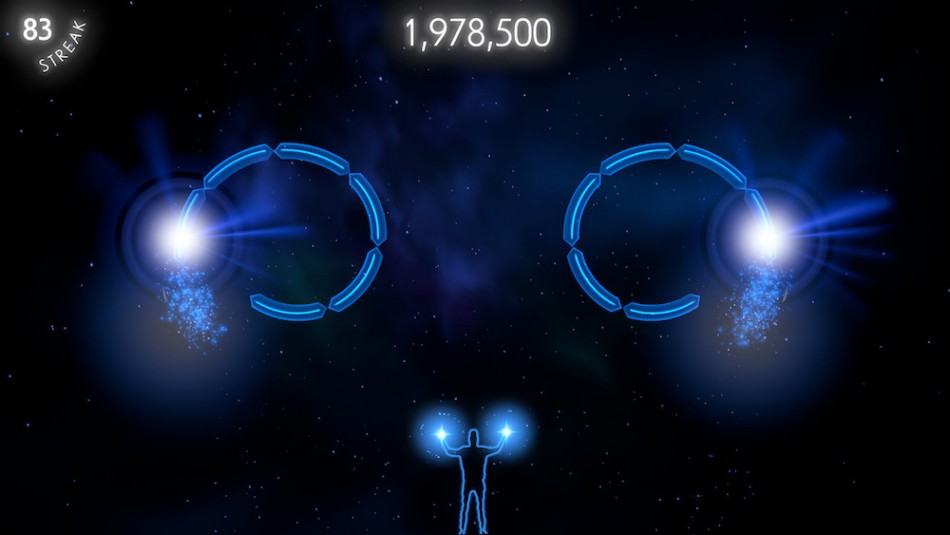 A series of commands appear on screen, most frequently arrows that indicate the direction that the player must swing his or her arms, but there are also commands to punch forward, trace paths with the player’s hands, and hold the hands still for an amount of time.

It’s not so much dancing as it is roughly emulating the role of the conductor of an orchestra. As Rock Band gives the player the feeling of an instrumentalist in a band, Fantasia gives players the feeling of conducting the music and controlling its course.

It gives players a deep connection with the music. Even the act of pausing the game requires the player to hold his or her arm in such a way that emulates the conductor telling the orchestra to quiet down.

While there are a healthy selection of classical songs (all magnificently recorded, as per Disney standards), the game also features a plethora of pop and rock songs, both on the bonafide-classics end of the spectrum (“Rocket Man”, “Bohemian Rhapsody”) to the modern end (“Royals”, “Some Nights”).

Most intriguing, though, is that each song has three or four separate mixes, all very divergent in style and instrumentation, that can be swapped at the individual-instrument level to create completely original mixes of the song on-the-fly. Playing Bohemian Rhapsody and layering on some sweeping violin behind the vocal and a hard-edged metal guitar in place of the original track’s guitar line is very cool and rewards the player’s creativity.

Equally impressive is the game’s ‘composition spells’ which give players on-screen tools that they can use to record and remix their own short loops that will play under the track. They are intuitive, easy to use, extremely fun to experiment with, and go even further to make the resulting mix our own. It was these tools that would go on to evolve into Rock Band 4’s seemingly-magical guitar solos.

Much of this magic carries over into the single-player campaign, which is magnificently designed to be more than just a series of menus taking players to the game’s songs.

It takes players through interactive, lush worlds that live by the beat of their music, in a manner that almost reminds me of the magnificent world of Brütal Legend.

Especially smart are the ways in which portions of the songs are woven into the fabric of the world after completing them.

The musical journey paired with the lovely and minimal on-screen visualizations, everything comes together to feel magical in the way that only Disney properties can.

Swinging my arms about to the music with the dazzling on-screen presentation really does give the experience of Mickey Mouse wielding his magic in the Sorcerer’s Apprentice.

For all of the incredible games that I’ve played this year, Fantasia remains one of the most memorable and genuinely fun gameplay experiences that I have had.

For me, it completely justified tracking down a Kinect. I would highly recommend it to Xbox One (and perhaps 360, though I have not tested that version) owners looking for something novel and exciting to play.