Seemingly along with half the internet, I’ve had the DuckTales theme song as an earworm recently.

Some consider me a bit of a retro gaming nut, but the truth is, I just love videogames: My personal mission is to try to play as many as I can, old and new, before my life bar runs out.

I’m fully aware that some vintage games hold up much better than others, but it is true that I hold a candle and bang the drum (at the same time, now that’s multitasking) for the classics.

Part of that is because I believe, as with great movies and records, truly great games stay great.

Amazing games like Robotron 2084, Bubble Bobble and Castlevania: Symphony Of The Night are akin to The Godfather or The White Album to me: Timeless.

But there’s no denying that the nostalgia factor comes into play when it comes to certain titles, experiences that might otherwise fail to enthral were it not for fond memories of youthful fun.

Which brings us back to DuckTales. 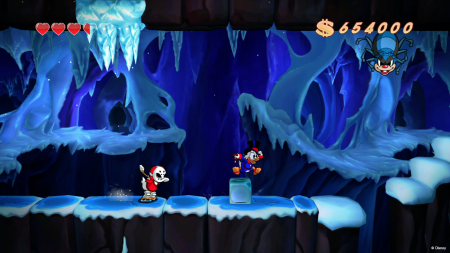 Unlike a lot of my now thirty-and-something-low Twitter pals, I was a bit old for Disney’s cartoon serial when it first came to British TV.

I was tentatively trying to get served in pubs and attract the attention of women – unsuccessfully on both counts – far too old and sophisticated for the wacky teatime adventures of Scrooge McDuck and co, right?

(Of course I still watched Grange Hill until I was about 19 and SM:TV Live, Pokémon and all, until I was 29, but that doesn’t fit the narrative).

I didn’t have an NES at that point either. 80s gaming for me, like so many other Brit kids, was all about home computers and arcades.

So I missed out on a number of great Japanese home games of the era, and though I’ve since caught up with many of them, DuckTales remained unplayed. Until now – sort of.

What to do? Just grab onto some DuckTales

WayForward’s ‘Remastered’ version of Capcom’s 2D platformer might be a full-blown remake, featuring remixed levels and tweaked gameplay, but it retains the core – and the ‘soul’ of the 1990 original. 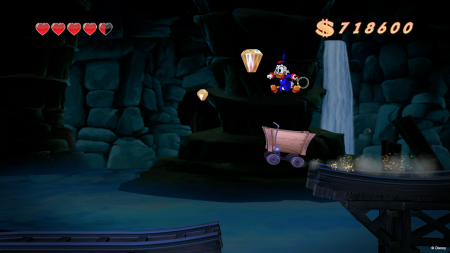 And you know what? It’s pretty good.

Sure, there have been better scrolling platform adventures, but when something’s clearly put together with this much passion and pride it’s contagious.

Reviews for DuckTales Remastered have been somewhat mixed, and it’s easy to understand why not everyone would enthuse about such old-school 8-bit style platforming action.

But when I’m playing the game, despite my lack of affection for the source materials, I feel as though I’m receiving others’ happy childhood memories through the ether and absorbing them by osmosis.

Like, even though I’m a 41-year-old DuckTales virgin I’m getting some sort of immaculate retro lovin’.

I don’t know, perhaps it’s simply a result of the especially infectious fervour with which this particular remake has been greeted, combined with the simple joys of a pogo-powered pseudo-Scottish duck collecting shiny treasures.