Tribloos 2 marks the return of the furry, cuddly Tribloos to our gaming screens.

They attempt to save their village from devastating storms with the help of the benevolent player whose role it is to manage the heck out of some resources. Take THAT, poorly managed resources… and mark my words there’s much more where that came from!

Not heard of the Tribloos before? Don’t fret, I hadn’t either before launching myself at the Android version of this resource management sequel and my experience was not hurt one iota by my ignorance.

We’ll get to what a Tribloo is later, for now let us concentrate on what a Tribloos 2 is. ‘Resource management’ is a vague enough descriptor for this game. After all, I’m sure you, dear reader (like me), have managed a not insignificant quantity of weapons, ammo, money, health, food, minions and even enemies in your time. The difference here is that the game’s primary activity is the indirect gathering, production and building of various resources in order to satisfy a specific laundry list of objectives.

If this all sounds a little too much like hard work, then I beseech you to think back to games like Lemmings, or more recently From Dust. We’re not talking the vast worlds of Anno, Sim City or Tropico here, but smaller, level-based puzzle games. Each level presents a single-screen, 2D environment comprising platforms upon which lay piles of wood and the unfinished frames of buildings (in the beginning, at least). These buildings, once rebuilt, may house more Tribloos to bolster your man-power (or should that be Tribloo-power?). They may also produce wood, tools or metal with which yet more structures or objectives can be attended to.

Before I fully complete the Tribloo-eating-its-own-tail metaphor, I should stress that Tribloos 2 is much more elegant in execution than this, or any other explanation could convey. Here’s me trying out a couple of levels in the PC version’s free demo, available directly from the Bumpkin Brothers website:

As I mention in the video, it’s clear that Tribloos 2 was developed on PC. Even if it weren’t for one of the nice Tribloos suggesting I use my mouse to click a button in the Android version, the tight zones within which the on-screen buttons will register a tap is a dead give-away. Not altogether infrequently, I struggled to be specific enough in my button presses to add or remove Tribloos from a given task. Don’t get me wrong, it rarely scuppered a carefully planned order of operations, but it was a minor niggle that on a 7” tablet screen the buttons felt a little small. I have not played the game on a phone, but I’d be interested to see if the smaller screen affected the interface.

An equally minor concern is the apparency of the (oft-times) singular solutions to some of the levels. In many cases, there are enough options and distractions to give the impression of the game allowing flexible strategies to be developed. In some of the simpler levels, however, it’s obvious that there is only one correct order in which to complete the objectives. This means that achieving a good time (and subsequently, a good score) comes down to hovering over buttons and pressing them as soon as they are available.

It is possible to render a given level uncompletable by wasting a finite resource on the wrong project, and the game specifically mentions this. I always realise this well in advance of reaching the dead end I have created by, for instance, building a house with the only 10 wood on the map, rather than investing in a sawmill that would allow me to create more wood and complete the level. It is a blessing, then, that Bumpkin Brothers made sure that restarting a level is quick and easy, and that all pre-level pep talks are easily skipped.

Such canny design decisions continue with the difficulty curve throughout the 75 levels (plus extra bonus levels and challenges) that Tribloos 2 offers. I feared that my 100% gold rating record by the halfway point was a sign of an easy game, but that was merely training for what was to come. The various settings of the Tribloos adventure offer increasingly complex hierarchies of resources and buildings, as well as environmental hazards that have to be navigated. 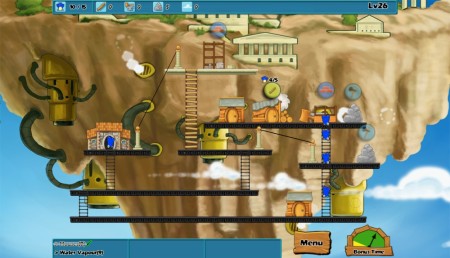 It is also worth noting that there is no failure state for a level (aside from planning oneself into an aforementioned dead end); Tribloos do not perish, and there is no time limit. Instead, the player is awarded ratings based upon the time taken and resources gathered in completing each level. It’s a sensible way of avoiding frustration and enticing repeat play. This makes Tribloos 2 a perfect commuting game. Two or three levels will fit nicely into those five to ten minute spaces throughout the day.

The story of the Tribloos quest to solve their problems of a meteorological nature is told through brief, relatively snappy exchanges that occur in between levels. In truth, the best thing about the story is that it affords John Dunn a frame around which to create some fantastic art. The colourful and vibrant world of the Tribloos looks vivid and cartoonish on a tablet screen. Somewhere between Monsters Inc’s Sully and the Teletubbies lie the cuddly, oddly-shaped titular characters. The backdrops, too, look lavish and interesting; so much so that I’d frequently forget that I was playing and just watch the Tribloos running around.

The odd niggle aside, I cannot be anything other than praising of Tribloos 2. Its presentation is as well-crafted as its gameplay, and there are several hours of taxing fun to be had for the current price of £2. If anything, 75 levels seems at times like an insurmountable number – further encouraging me to recommend this as a game to be enjoyed in small chunks. Go on, make your next journey that little bit brighter with a Tribloo or 2.

Tribloos 2 is available on PC, Android and iOS devices. This review was of a publisher-provided Android copy of the game.