It’s fun watching a knight slay a dragon, or criminals stage the perfect heist, but it’s much more satisfying when you are the one doing it.

Videogames have a distinct advantage over other entertainment mediums in that they let players directly interact with the world. Games like Middle-earth: Shadow of Mordor, Payday 2, and Dynasty Warriors let us feel like the heroes and villains we love to watch and read about.

There is a genre however, that hasn’t been translated to a game in quite the same way until recently: Horror.

Don’t get me wrong, there are plenty of worthwhile horror games: Alan Wake, Amnesia, P.T. and Luigi’s Mansion just to name a few of my favorites. I believe that in most ways, games are the best way to deliver what is great about the horror genre. You can’t just look away from the screen like you can during a movie, and games can create terrifying atmospheres and settings on par with celluloid horror classics.

However I think they lack something that is important to the horror genre. In the same way that I feel like a badass fighting the armies of Mordor or Lü Bu, I want to fear for my life, or my character’s life, when I play a horror game.

This fear is hard to achieve in a game because, at the end of the day, it still needs to be a game. You need to be able to kill the monster, or escape the mansion. If you fail along the way, you can try again from a checkpoint. If you hit a dead end, you may have to face whatever is chasing you, but you will still get another shot at it, and now you’ll be ready for that particular challenge. There is no sense of hopelessness; you never have to say, “Well, this is it.”

Games certainly have a rich history of perma-death. Arcade games revolved around being limited to a set number of lives, and roguelikes like Spelunky and The Binding of Isaac definitely evoke my survival instincts at times, but that is usually because I have a really good run going. I don’t care about my character in a narrative way, and I don’t feel fear, other than worrying that the last 15 minutes have been a waste. 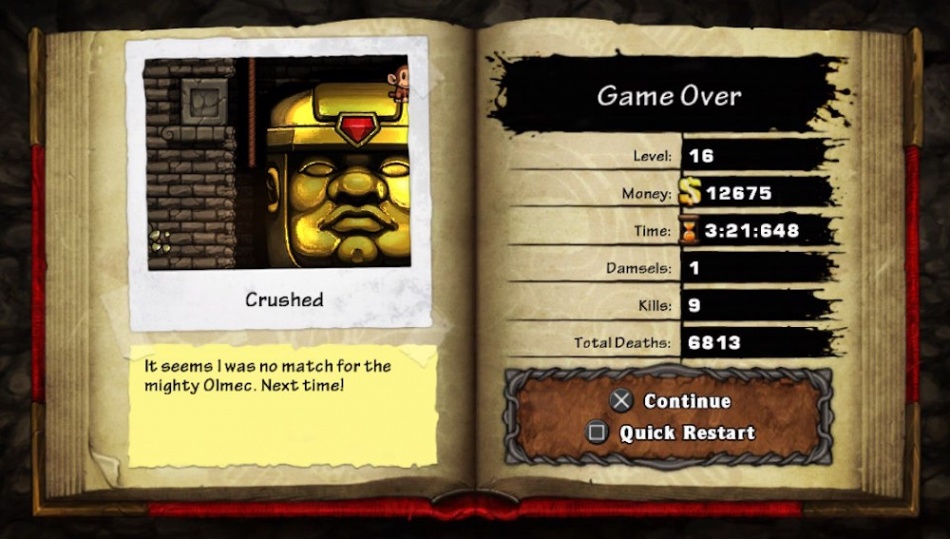 I don’t think these are bad things. I don’t play roguelikes for their atmosphere or stories, and horror games still need to be games. If you died and had to start over at every slip up, it probably wouldn’t be fun or scary.

So, let’s dive into the game that tackles this head on: Supermassive Games’ Until Dawn.

Until Dawn delivers exactly what I didn’t realize I was missing in horror games.

The big problem of, ‘If the hero dies they need to respawn, because how else would the player keep playing?’, is addressed right away by introducing eight characters, all of whom the player will take control of at some point. It is made clear by the intro of the game that these characters can easily die if you mess something up.

In many games you may have various paths to take, the riskier of which might lead to more loot or a secret upgrade. In Until Dawn, you have mere seconds to decide between, say, jumping down from a cliff, or climbing down carefully.

There’s very rarely an obvious ‘correct’ choice in these situations. One may be more difficult, but faster, or they may seem fairly balanced. If you decide that you don’t like what you did, tough luck, you can restart the whole game, otherwise you have to live (or die in some cases) with your decision. 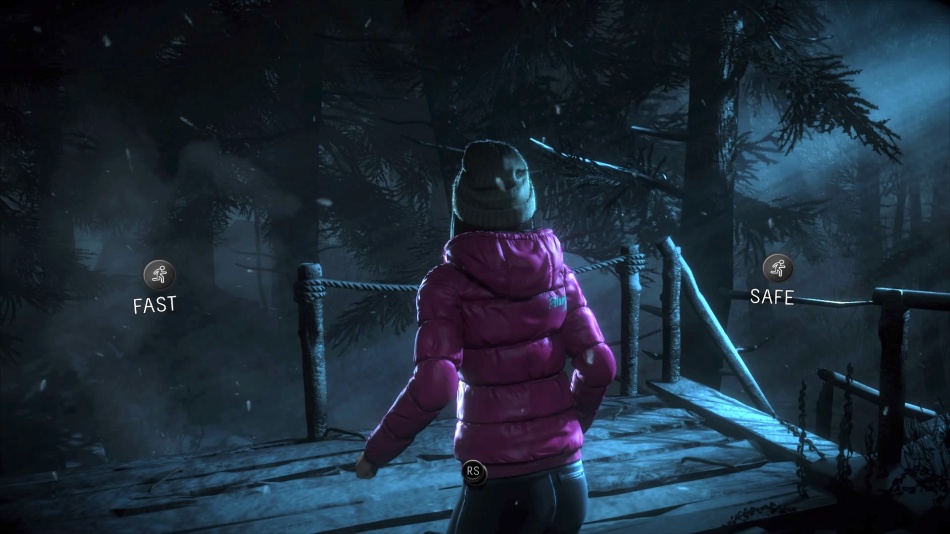 Other games, such as Telltale’s The Walking Dead and DONTNOD Entertainment’s Life Is Strange, play around with the idea of permanent choice. Players rarely have to fear for their protagonist’s life, however, as there is just one of them, and it is their story. When something goes wrong that kills the protagonist, you try that scene again.

One could argue that, with eight characters, you surely wouldn’t care about all of them. Initially, I agreed.

The game encapsulates many horror tropes, including the stereotypical characters, and it does a good job of making some less likable than others. Towards the beginning I joked with my friends about which characters we would try to get killed, but when it came around to playing as them, I felt responsibility over them. I never intentionally put any of them in harm’s way.

I only have a few complaints about Until Dawn, the first being that the game isn’t as scary as other games in the genre. I was never paralyzed with fear like I have been in Amnesia and P.T. But this is barely a complaint, because I was still engrossed in the game.

I imagine that while a horror scenario would be, well, horrifying, my primary concern would be surviving. I would be far more scared of being killed by the monster than I would be of how frightening the monster looked. Its fangs and claws are the real danger, not the fact that it has the face of a clown or has dozens of eyes.

A great example of this is in Bloodborne. The Lesser Amygdalae that hang around on walls and ceilings made me incredibly uneasy, but when it came to actually fighting Amygdala, I was much more concerned with not dying. The monster stopped being scary when it started being threatening.

Anyway, back to Until Dawn. 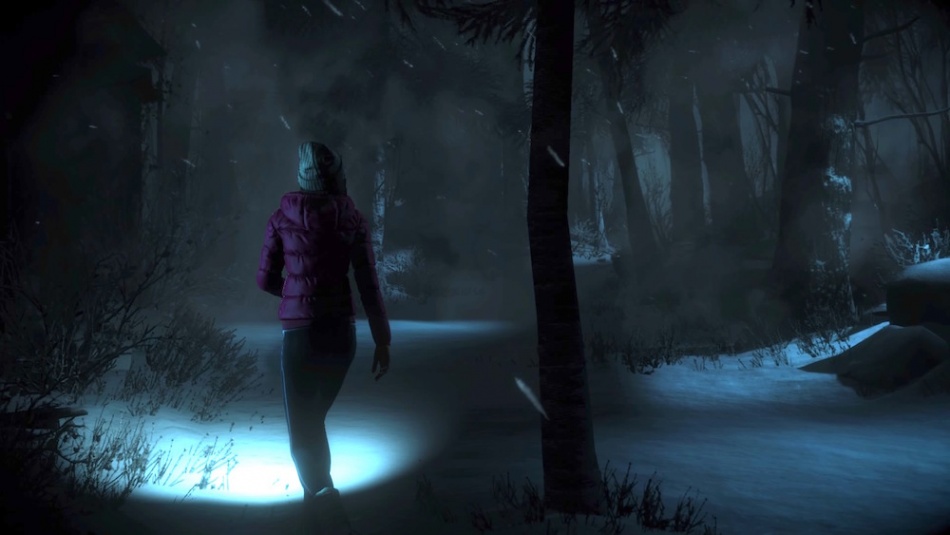 My second issue is that, like many narrative-driven games and movies, Until Dawn loses some of its charm during subsequent playthroughs.

Juggling eight characters’ decisions and lives, and trying to wrap a story around them, is not an easy task.

There were, however, some scenes that were clearly more scripted than I initially realized. Let me briefly run through one such scene (NB. Mild spoilers from this point on):

You are chasing a monster through the woods. You have a rifle. At one point you have a chance to take a shot at the monster. If you do take the shot, you miss. A minute or two later, you see the monster at the end of a long passageway. This is a much better time to shoot, they are unaware of you. You bring the gun up to your shoulder.

When I got to this scene in the second playthrough, I decided I would save the bullet. I didn’t take the first shot, instead saving it for later. When I got to the second shot I once again took aim, expecting something different, but as you can probably guess, I was once again greeted with a click.

The scene went great for the first playthrough. It made me think about how I should handle my resources, and also made me excited to see what would happen if I did something differently. The second time it came around, I was mildly disappointed.

I am perfectly fine with games that are geared more towards a single playthrough, but this still stuck with me. I don’t fault the game or the developers for cutting corners, but I hope that next time things will be a bit more consequential in this regard. 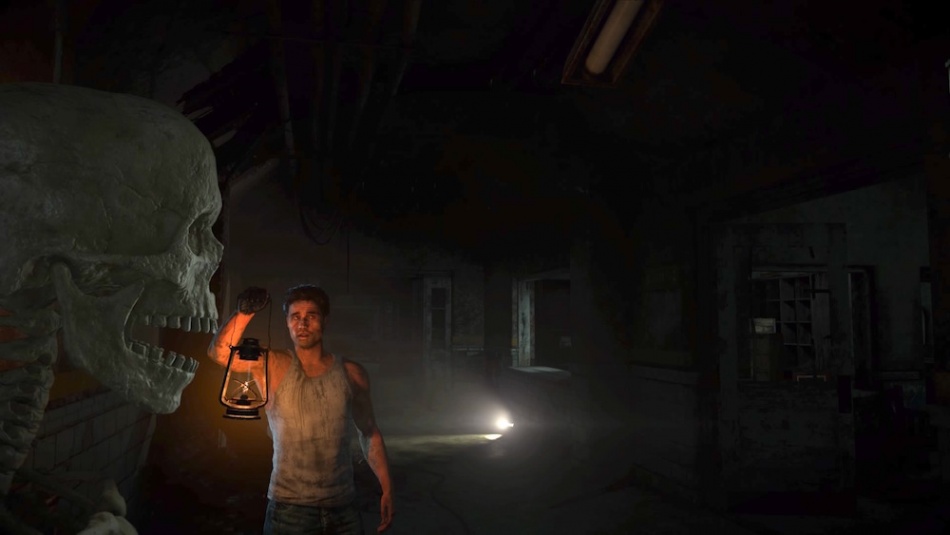 About halfway through the game one of the characters encounters a hand moving back-and-forth on a workbench. If you approach the hand and decide to touch it, you will be greeted with a bear trap. I won’t say any more about how this scene plays out, the important part is how it starts.

There is no logical reason to approach the hand, let alone touch it. I was in a large, spooky building, where anything inside would probably try to kill me. If this scene were taking place in a movie rather than a game, I would probably let out an exasperated sigh and roll my eyes.

Yet there I was, walking up to the hand, looking at it, and touching it. I can no longer criticize movie characters that do dumb things.

Once again, no reason for going up to the hand. I wasn’t trying particularly hard to find collectibles or hidden clues. This hand just caught my attention, so I decided to look at it, which, now that I think about it, is the exact point of it. 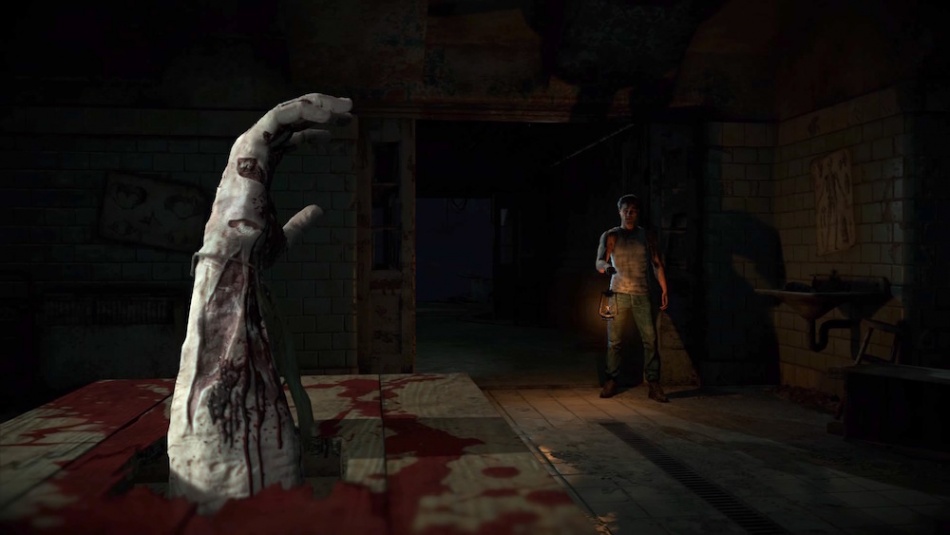