Cane and Rinse’s James Carter considers what worked for him and what didn’t among the new videogames that he played during 2016.

What on Earth is wrong with me? I don’t want to start pulling a never-ending thread of despair, but at a certain point…

I played 143 games this year. Part of a grand plan to kick myself in the posterior, and out of a three-year-long gaming stupor.

There are many reasons why I’ve been feeling less-than-enthusiastic towards the videogame industry for a while now. Honestly, I’ve not really got to the bottom of it myself yet.

One thing I am sure about, however: the games are not to blame. Here are 10 fine examples:

ABZÛ
It wasn’t a stiflingly hot summer, but delving into ABZÛ was so gloriously refreshing that I gladly drank in all it had to offer in a single swimming.

Puns aside, underwater exploration from Matt Nava, the art director of Flower and Journey, set to the harp strings of Austin Wintory? Perhaps this could have (should have?) felt like the requisite underwater level to its predecessors’ unbridled platforming joy, but I was mesmerised by how well it grasped the feeling of drifting into the aquatic unknown.

ABZÛ captured the eerie, even scary, spirit of being a tiny speck in a vast ocean. Dwarfed by environs and creatures alike, an interloper into a world that is simultaneously calm and bursting with life. The slow exploration that typifies ABZÛ builds throughout to a rushing crescendo that threatened to overwhelm me.

Being in water is freeing for me, and ABZÛ came closer to expressing this freedom than I could have imagined. 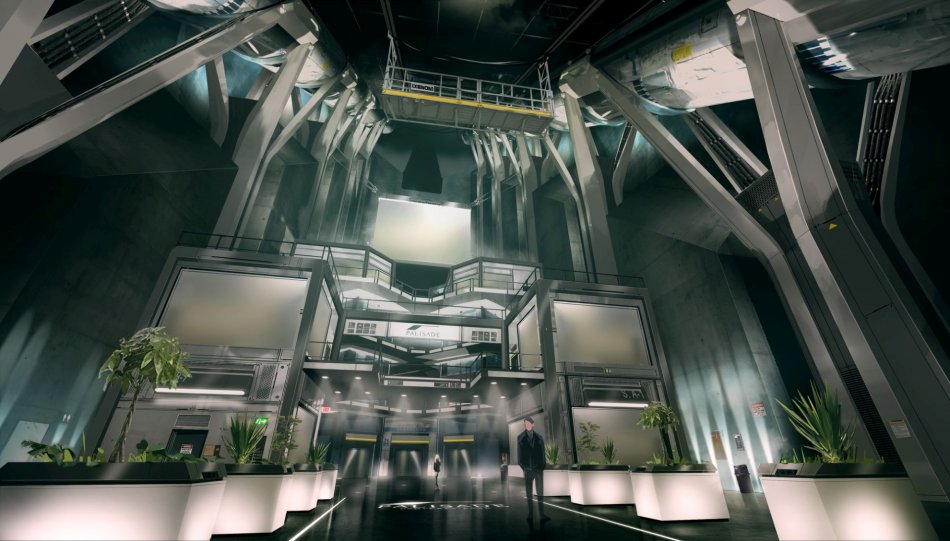 Deus Ex: Mankind Divided
As a commentary on social strata and divisions, Eidos Montréal really missed the mark in my (inexpert) estimation. Mankind Divided was a complete mess, tonally. On top of that, for all the airs of social critique, it also failed to provide what I consider a satisfying narrative.

Thankfully, much like MGSV last year, what it did demonstrate was technical and mechanical prowess. A refinement on Human Revolution, for sure, but the level design and environmental art alone made it worth persisting with goateed Swiss Army potato, Adam Jensen.

Even he couldn’t dull the sharp excitement of infiltrating the Palisade Property Bank without firing a single shot, raising a single alarm or engaging a single enemy. The power of player choice is self-evident in the shape of one’s ability tree, but it’s the feeling of sneaking behind the curtain into the multi-faceted environments that really stood proud. 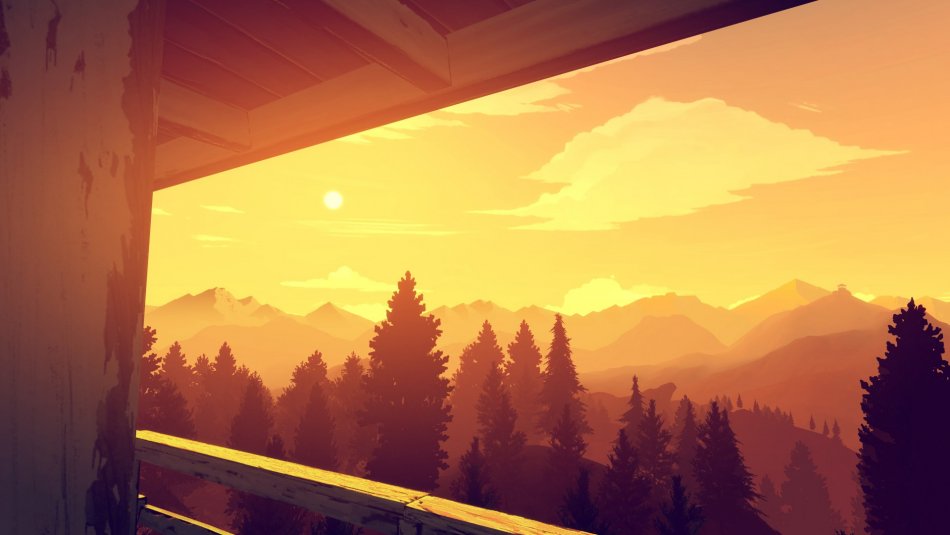 Firewatch
Environments, eh? Well, whilst we’re on the subject, it’d be rude not to stop off in Shoshone National Forest to take in nature’s wondrous sights. Just, be sure to pick up after yourselves, and, for crying out loud… NO NAKED FLAMES!

I do think there is a disparity between the player’s experience and that of Henry, the fire lookout protagonist. The condensed timeline creates a distorted perception through which our tension rises in a way Henry’s couldn’t. There’s an acuity to the 5 hours we experience which brings concerns and problems to the fore that would dissolve in the time and space Henry has.

This, of course, is exactly what Campo Santo intended. From moment one, we make decisions about our Henry that form part of the dramatic licence. It’s a smart move to gain the player’s assent in the deception. And I gladly bought into it.

There was something quite unique about stepping into a world that was Olly Moss and Jane Ng’s artwork come to life. Taking a look back now at any promotional art or screenshot, I can see it moving, I can feel the stifling heat and the pang of fear Henry, Delilah and I shared, upon glancing across the wide forest vista, towards the sight of a single plume of devastating grey smoke. 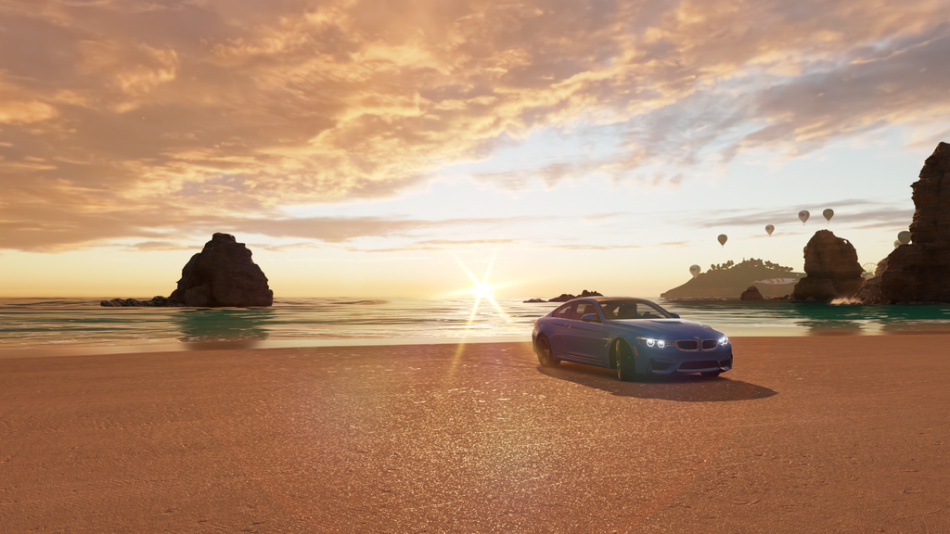 Playground Games’ Horizon series is as close as any games come to Criterion’s style of arcade racing. I make no secret of the fact that I consider Burnout Paradise to be the pinnacle of Criterion’s work, and believe you me, this is where that particular itch will be scratched.

There’s a lot of car customisation and tuning to be had, and oodles of cars to unlock, challenges to beat and collectibles to find, but I’ll remember blazing along a coastal road at 120mph, welcoming the sun as it rises over the gleaming, azure ocean to the clarion call of CHVRCHES’ Clearest Blue. 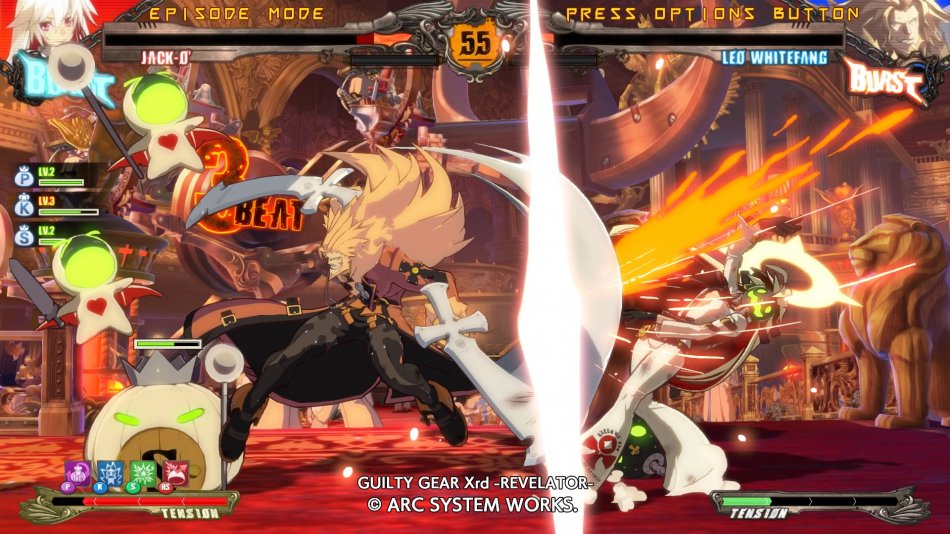 Guilty Gear Xrd -REVELATOR-
Capcom take heed. Street Fighter V’s launch would have been beyond unacceptable in any case, but next to the revelation that is Guilty Gear Xrd, it was embarrassing.

Tutorials? Check.
No. Real, interactive tutorials. With balloons and dummies that teach movement, attacking, blocking and combos in a colourful, fun and actually beneficial way? Check.

Glorious artwork, befitting of the finest animation studios around? With character design that ticks the ‘silhouette’ standard, but doesn’t forget that faces and costumes matter? Check.

Lobbies that personify the player as a cute, customisable avatar in an arcade, visualising the spectator experience, and allowing flexibility in arranging pickup matches or full-blown tournaments? Check.

Smooth, fast loading in and out of matches, along with a delay counter in-match that lets players know, accurately, the number of frames delay between them and their opponent? Check. 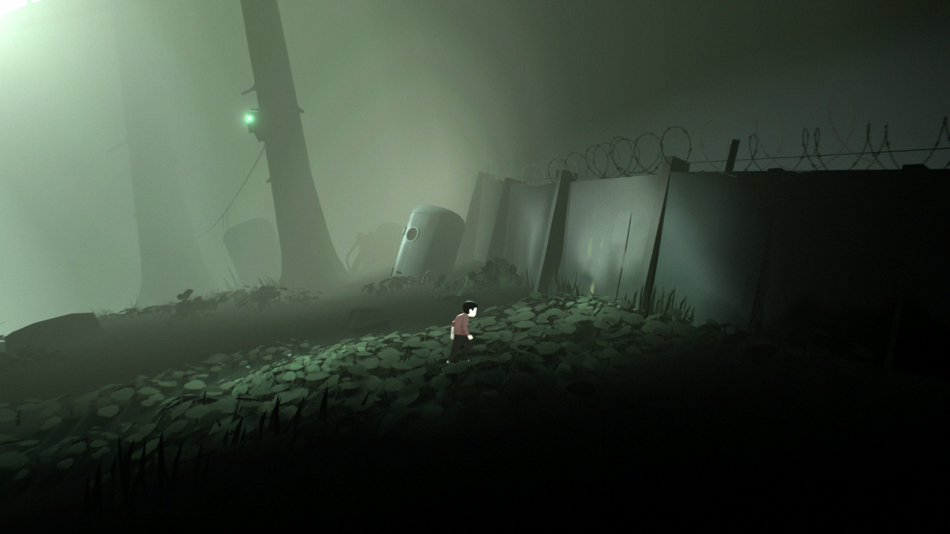 Inside
Possibly the only game on this page that’s going to hang with Guilty Gear in the animation department, and it couldn’t be a more different beast – visually, or tonally.

I still think about the last hour… no, scratch that, the entirety of Inside on a much more than regular basis. I had questions by the end, and so did Inside. I ran the gamut of emotions, and so did the protagonist (and the puppets for that matter, so expressive were they).

I simultaneously know exactly why it took Playdead six years to make this game and have no idea how they managed it. Alright, hyperbole over, just go play the darned thing. 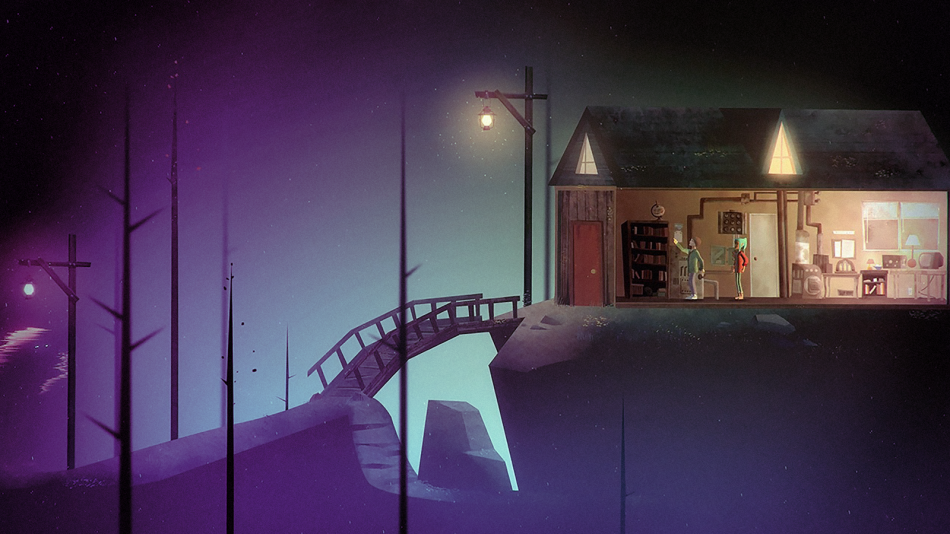 Oxenfree
It’s Goonies for anyone who wants to relive their teenage years through the most rose-tinted of spectacles. Resplendent with the ridiculously-verbose and overly-mature teenagers of Dawson’s Creek, but fun.

I know Night School Studio’s Oxenfree left some folks cold, but it’s hardly the first time a game centred on wandering about an apparently-deserted landscape, looking for meaning behind somewhat supernatural goings on has grabbed my attention. It’s not even the first time this year.

Story-heavy and exploration-packed, if you’re turned off by backtracking and kids who say ‘like’ a lot, maybe this isn’t for you. I loved it! 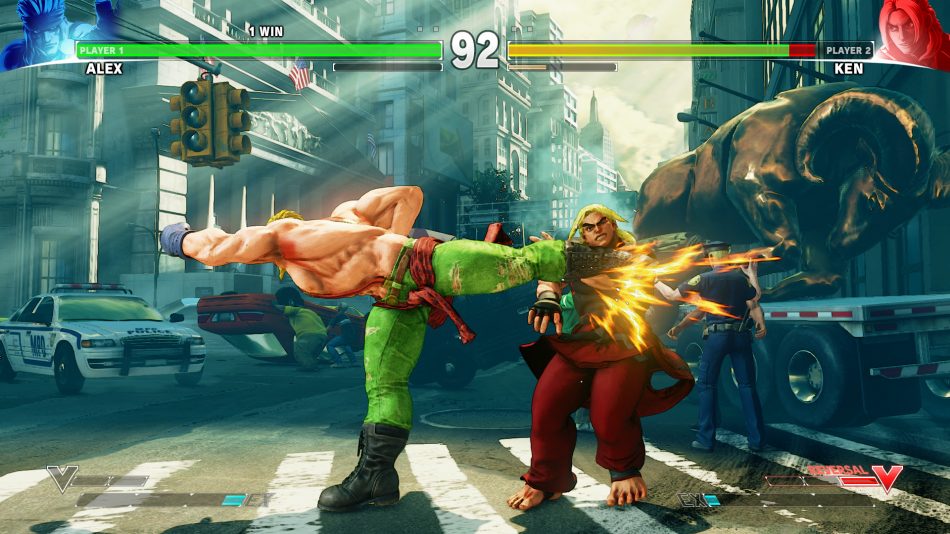 Street Fighter V
Never has such a broken, half-finished, poorly-explained,… oh, who am I kidding? It’s Street Fighter, and in my opinion it’s one of the best fighting games to have ever existed.

Look, there’s no getting around the fact that Capcom screwed themselves, the game and most of their potential customers with Street Fighter V. Missing popular modes and features, rushed to allow the Capcom Pro Tour to start in March, not on Xbox One (however necessary that was) – the list of mistakes goes on.

Honestly, I don’t know how many of those mistakes Capcom could (or should) have foreseen as such. What I do know is that I have been rapt for many a weekend this year by the Capcom Pro Tour. I have been excited for every new character and every announcement, despite not showing any more aptitude for the game than I did for Street Fighter II in my bedroom nearly 25 years ago.

Whether or not Street Fighter V gains mainstream recognition and appeal to match Capcom’s expectations, the thriving competitive scene can’t be disputed. For my part, I’m still able to enjoy scrabbling about with basic combos and a barebones understanding, even if I’m a bit of a letdown in the grand scheme of things. 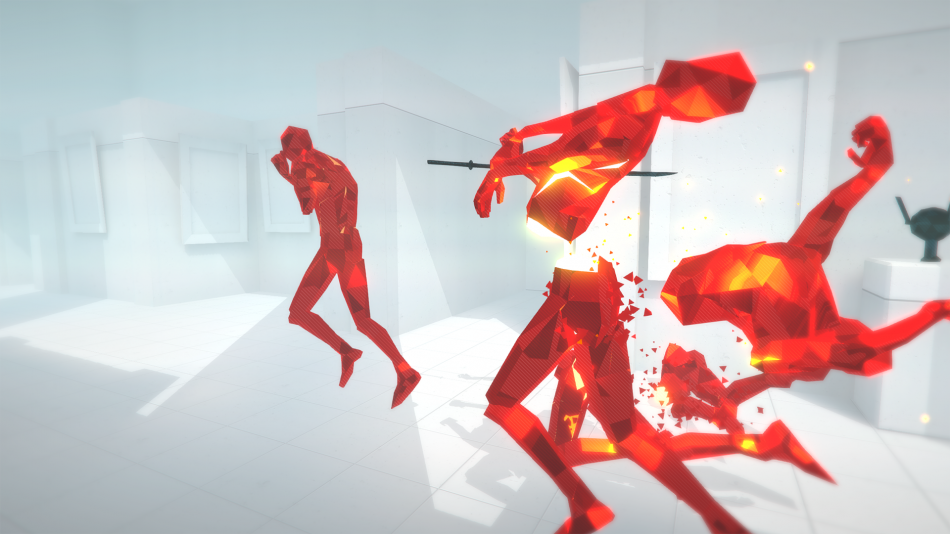 SUPERHOT
It’s the most innovative shooter I’ve played in years.

Tempting to leave it at that, really.

Wait, what am I saying? Of course I decided. It’s not like anyone else could have. Could they? 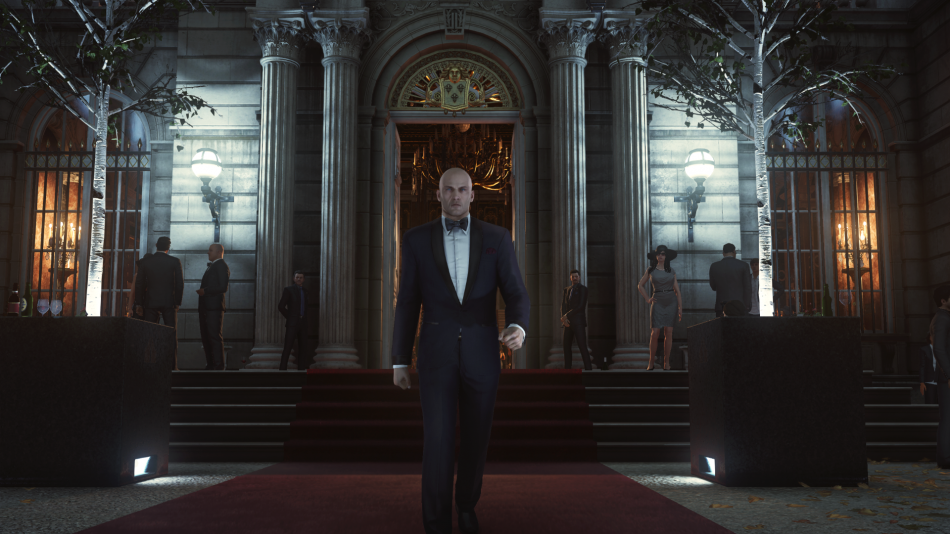 Hitman
Those with eagle eyes will have noticed that the previous games were in alphabetical order. That sort of non-committal, hippy nonsense stops here.

It’s frankly ridiculous to think that any other game of 2016 could hold a candle to Hitman.

But I would say that, wouldn’t I? Agent 47 and I have a history, you see. That’s not to say that Hitman was born into this world with a silverballer in its mouth – far, far from it.

If “anticipation is the greater part of pleasure” (Angela Carter, The Bloody Chamber and Other Stories), then Hitman proved that a healthy scepticism runs a close second in the pleasure stakes.

Having been treated to much the same promises as IO Interactive made before Absolution, and an equally troubling PR campaign (if for very different reasons), I had put expectations very much aside well before mid-March rolled around.

Hitman managed to retain the mechanical proficiency of Absolution, along with a refined version of its Contracts Mode. It combined these with the structure, level density and ingenuity of Blood Money and added Escalation Mode and robust, diverse Challenges for good measure. Frequent events and sticking to their tight schedule showed IO and Square Enix had the intent to follow through on Hitman’s promise.

That I am happy to list Hitman as the very best of 2016’s interactive entertainment is the tip of the iceberg.

Stealth games have seen the most prolific 18 months since certainly 2008, and possibly ever. I don’t make this claim boldly, though it is certainly open to discussion; I do, however, fancy my chances defending that position, as a veteran of stealth games for some 25 years now.

So when I say that Hitman is my favourite stealth game of the past decade and (time will tell on this) quite probably all time, I hope you understand how serious I am about this game’s credentials.

Where else, this year (or any other for that matter) have I cut about a mansion, dressed as a vampire magician, then set off and enjoyed a lavish fireworks display in order to choreograph a perfect moment in which to kill both targets by turfing one off a balcony onto the head of another.