We timed our latest podcast, all about Eugene Jarvis’ seminal twin stick coin-op Robotron: 2084 to roughly coincide with the game’s 35th anniversary. 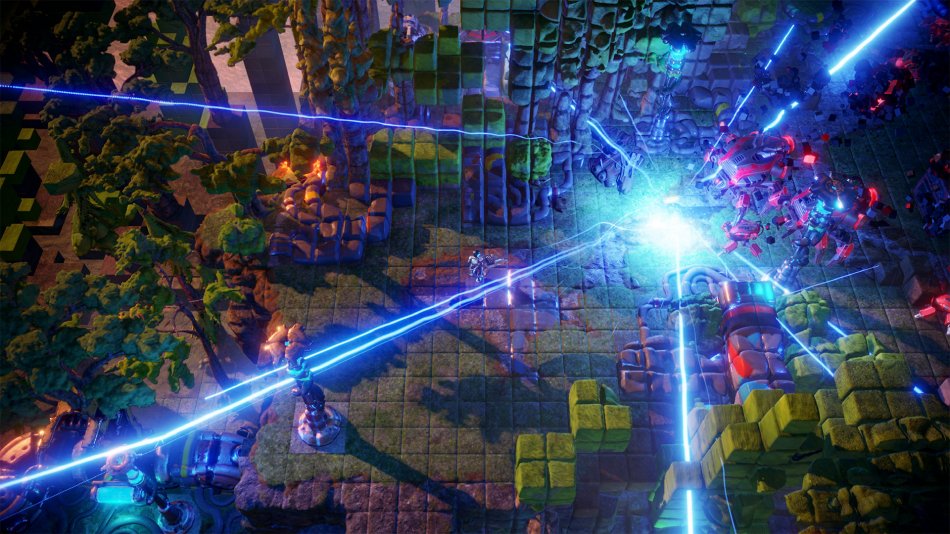 It seems that, fortuitously, Housemarque had the same idea with Nex Machina – a genuine spiritual successor to that legendary title, made in conjunction with one of its original authors, Eugene Jarvis.

Cane and Rinse doesn’t ask for review copies of games, but it was with some excitement that I received an email from Housemarque’s PR late last week, offering us code. I wasn’t aware that Nex Machina was imminent (otherwise I’d have probably mentioned it in the aforementioned podcast), even though I have long been looking forward to it.

You see, I have said many times to anyone who will listen that PS4 launch title Resogun remains probably my favourite, and most played, game on the machine.

This follow up – Robotron to Resogun’s Defender (another Jarvis game of course) comes out of the gate more fully featured than the state in which Resogun launched.

Don’t get me wrong, I liked that game very much from the start but it had clearly been rushed to release in time for the PS4’s debut – and was given away with PS+ in the console’s first month – and had a few issues that needed addressing.

Happily Housemarque supported the game with several substantial free updates which added a ton of useful feedback to the player along with general tightening and upgrades, as well as some reasonably priced dlc packs (one of which was conceptualised in conjunction with Jarvis) adding modes that changed the core gameplay in some interesting and fundamental ways, serving to extend the game’s already generous life.

I clocked the game on multiple difficulties many moons ago but as a score-chaser I still play it, a lot.

Although under embargo, I rushed to tell people I could trust what an excellent time I was having, before I’d even completed my first game.

Naturally, after conversing with a few of the Cane and Rinse team (sworn to confidentiality of course), I unpaused my first run at Nex Machina and died several times in quick succession.

Hubris was my downfall. One of the only complaints I’d made was that the lowliest setting, Rookie, was proving a little on the easy side for a first go. 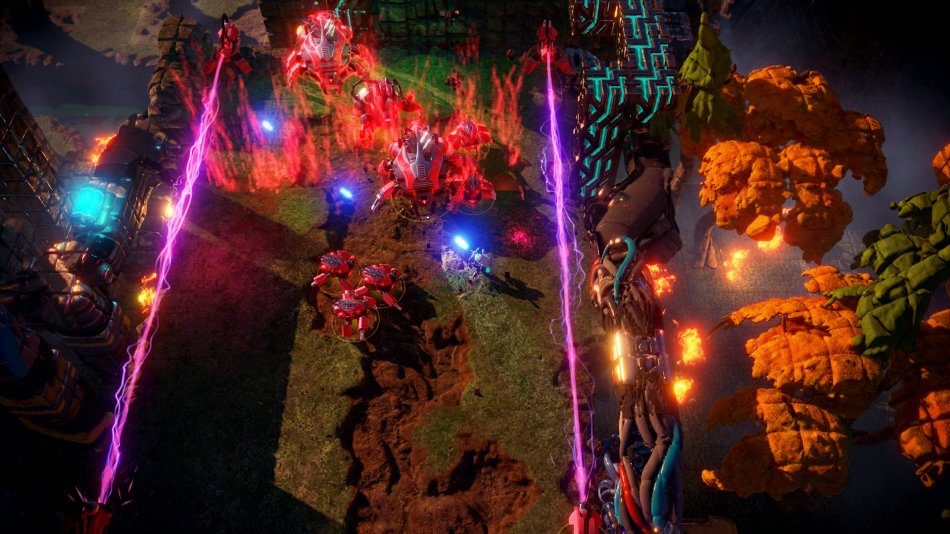 I’ve now since 1CCd Rookie and am – only at the time of writing – number one in the world on the leaderboards (which were reset today, erasing the developers’ unattainable highs).
As with Resogun, you are not shamed into playing on the faster and more brutal higher difficulties, but you are rewarded for doing so with a more interesting and challenging game.

That said, over the last three days I have learned that there are so many ways to enhance and maximise your score in Nex Machina that I could be playing this for years before fulfilling the potential.

Far more so than with Resogun, a perfect game requires a lot more thought and skill, such are the number of secrets, incentives and briefly available therefore easily missed ‘optional’ targets.

It is the overwhelming need to rescue humans which ties everything together and connects Nex Machina to its antecedent.

A number of hapless, bumbling folk are positioned across each differently shaped and sized scrolling stage. These are tied together by a timed multiplier – collect the first and you will need to dash to the next, usually risking death and a restart by taking the most dangerous path before not only the combo is lost but the human itself, harvested by the evil droids.

A delightfully responsive and accurate ‘dash’ is accessed via the left shoulder-buttons, affording the player the confidence to move into confined and congested areas that would be strictly no-go otherwise. Furthermore, this manoeuvre can be powered up to triple and explosive variants, inviting – along with the one-hit shield item – even more daring and therefore satisfying play.

Talking power-ups, secondary fire weapons are available on the right shoulder buttons, however only one can be equipped at a time. When the token appears on the playfield it cycles between the five options. Smart bomb, rocket launcher, laser, a rolling remote grenade and even the initially counterintuitive short-range sword each has its pros and cons, but each will prove essential at some point during a game.

If you have no interest in repeated play or score-chasing, I think that – assuming you have a penchant for the odd twin-stick shmup – you will probably still enjoy Nex Machina to a point. To the point when you finish it in fact.

I think the feel of controlling your compact guy/gal (who niftily enters the game astride some sort of jet-cycle) is sublime. The level of control for me hits that absolute sweet spot between impeccable controllability and twitchiness. This feels honed.

Similarly, the aiming of the right stick always feels spot-on to me, and the bullets – which can be expanded in range and spread – move at just the right speed and the increasingly interesting to fight enemy mecha take just the right number of hits before they dissipate into their constituent voxels.

If it’s eye candy you’re after then Nex Machina may or may not provide what you’re after. Given the amount that is going on – and the speed at which everything moves – particularly on the harder difficulties – it is undoubtedly an impressive achievement; bold, vivid and the use of volumetric pixels gives it a distinctive look, but I wouldn’t necessarily go so far as to say that this is an outstandingly beautiful looking game (based on my experience at 1080p with no HDR).

I do reckon it looks pretty darned cool though, with thoughtful outlining and highlighting making all the important stuff pop – even as the screen is apparently in chaos, more often than not I find that my eye is drawn to the next-most important target, be it killable or collectible.

Compared to what little information the player had to go on in that initial version of Resogun, this is a world away.

There’s also an awesome, dizzying stage transition where the camera swoops around the interconnected arenas to join your avatar for the next level and, essential to the experience in my view, a pulse-pounding Ari Pulkkinen (with Tuomas Nikkinen) synth score which drives player on, complementing the action wonderfully.

The handful (five, one for each world) of boss fights are similarly well judged for my money, demanding something of the player but unusually satisfying and a welcome serving of variety after 15 waves of relentless target prioritisation.

Couch co-op play is also available utilising a shared pool of lives, though I have yet to try this mode. 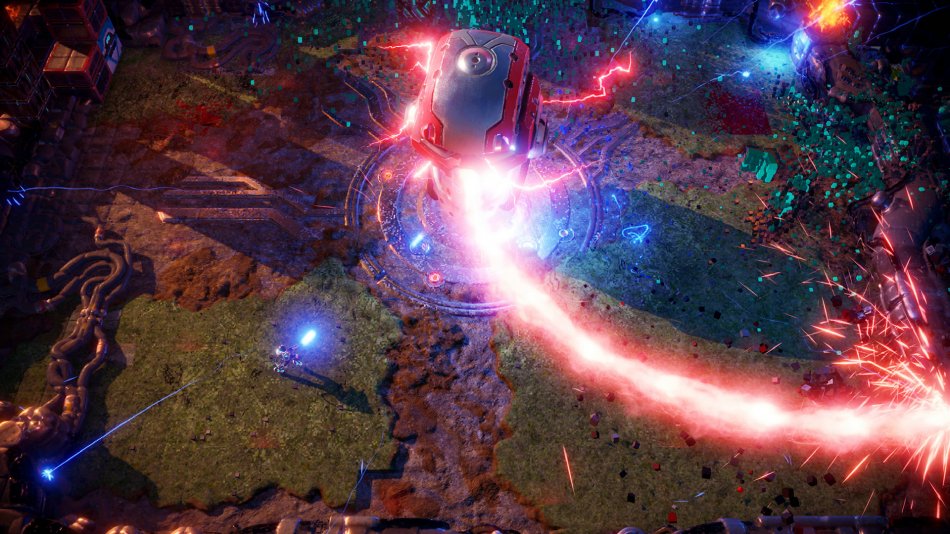 Cease play after one multi-credit victory and staff roll and you would be missing out on the majority of what this game has to offer though.

The meat of Nex Machina is undoubtedly in its score-building. If, like me, you’re the type of player who gets a kick out of trying to better yourself – and your friends – on the (cross platform) online leaderboards, you could be in for years of entertainment here.

The pull to retry and perform just a little bit better in terms of managing all those variables is strong as your personal data banks begin to fill with the requirements to best each level, and behind which destructible blocks of background hide extra lives (you can only ever have up to five in reserve at one time), secret humans, or hidden paths and even exits to optional areas.

There are so many considerations to be made during every second of play that your brain and thumbs will be doing a full-blown gymnastics routine. Every micro-moment contains some element of risk/reward and this, combined with the delicious ‘feel’ of playing the game and that pumping OST and you can expect a heady dose of dopamine.

In fact I am on one right now. I must, I must, improve my best.

Housemarque and Jarvis have exceeded my hopes for this game by producing a worthy successor not only to the Finnish software house’s great legacy but also that of the legendary Robotron: 2084 – and perhaps just as pertinently – its previous spiritual successor – the much-loved Smash TV.

Another ‘must buy’ for the glorious gaming year that is 2017 as far as I’m concerned.