“Whatever happened to the scrolling beat ‘em ups, the Double Dragons, the Final Fights and the Streets of Rages?”

It’s an often heard lament among ageing videogame enthusiasts such as myself.

The unexciting answer here is that they’re still being made ever so often, but that, possibly to a presumed dead end in their design evolution, they have stepped out of the spotlight in favour of modern 3D melee action games such as the Devil May Crys, the 3D Ninja Gaidens, the Bayonettas and, yes, the God of Wars.

But playing these games is not quite the same, is it? It’s not the same as standing in the midst of the joyous cacophony of an arcade hall, shoulder-to-shoulder with a friend, letting your coins roll in the slots to sweep the mean streets clear of scumbags in the guise of the mayor and his would be son-in-law, while replenishing your health with junk food found under trash cans.

As a matter of fact, it isn’t even the same as sitting side by side in an attic room, controllers in hand and staring at a small colour TV screen, to exact revenge on the brutal murder of a love interest by beating up punks and jumping on conveyor belts in the guise of blue and red clad brothers. 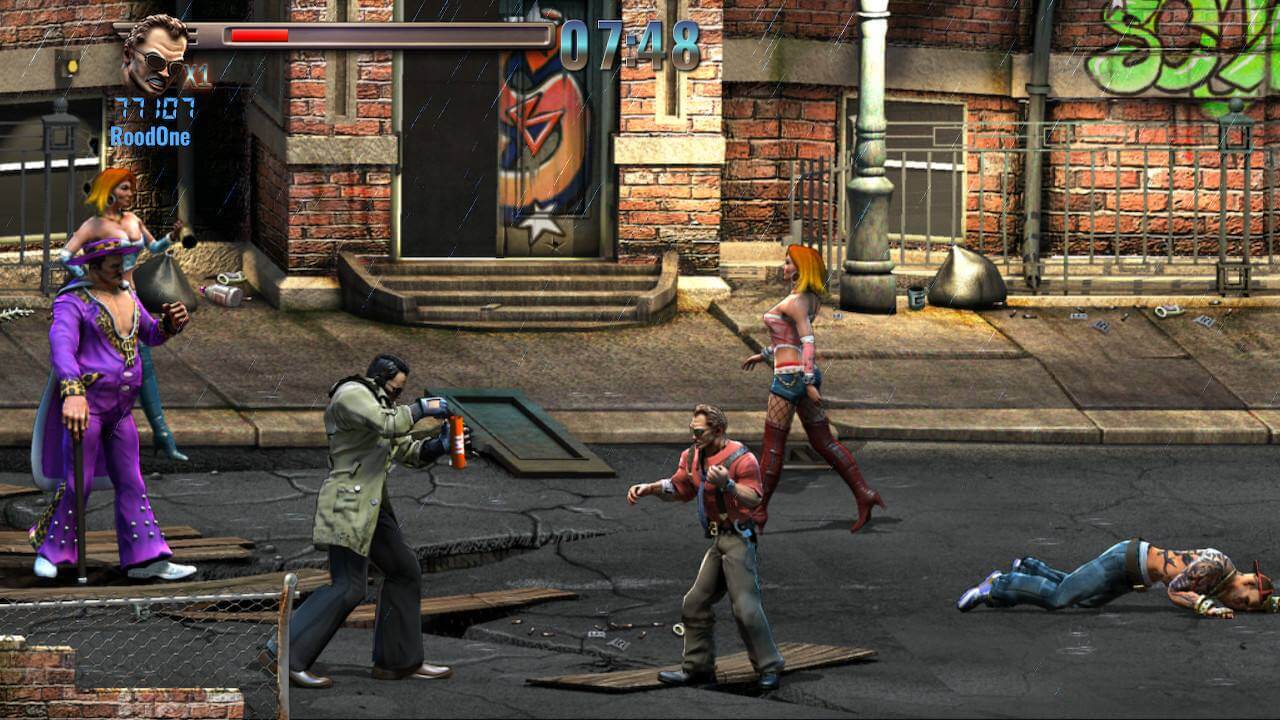 Come to think of it, if there is one thing that sets apart the belt scrolling brawlers of the 8, 16 and – to a lesser extent – 32-bit eras, it’s the cooperative multiplayer aspect, as a standard set by Technos’ Double Dragon. The independently controlled cameras in 3D environments and large scale spectacle of modern beat ‘em ups generally just don’t lend themselves very well for more than one player to do their thing on a single screen.

So this is where games like Raging Justice step in. In Raging Justice we have an unabashed throwback to the scrolling beat ‘em ups of the early 1990s, following in the footsteps of Capcom’s Final Fight in that it’s pace and responsiveness is ahead of earlier famous attempts such as Double Dragon and Golden Axe, but also in that it’s a much simpler and far less technical game than later, more evolved releases in the genre like Capcom’s Tenchi o Kurau II and their Dungeons & Dragons games, Treasure’s Guardian Heroes or Winkysoft’s Guardians.

Among those following the development of Raging Justice, much has been made of its eye catching graphical style; a hi-res rendition of digitised pre-rendered sprites, similar to the technique made famous by Rare for Donkey Kong Country and Killer Instinct and one that became quite widespread for years to come, even being employed by hardcore Japanese arcade game developers like Saurus, Aicom and Takumi (incidentally, Raging Justice developer Makin Games’ Nic Makin is an ex-Rare guy). What you get here is mostly static but highly detailed gritty environments, populated by grotesque, grimacing and generally off looking characters.

I quite appreciate Raging Justice’s striking appearance. Sure, the characters are by no means aesthetically pleasing in the traditional sense, but I find these angry (or raging) monstrosities quite entertaining looking and it all reminds me of schlocky early 90s Midway, with the eye searing colour schemes and the digitised characters with their unnatural, stiff animations. I was reminded of the looks of games like NARC, Trog, Total Carnage, Rampage: World Tour, NBA Jam and WWF: The Arcade Game while playing this. Just great trash, overall.

When I first started playing Raging Justice on the normal difficulty, I was less amused, however.

Dirty Harry-like cop Rick Justice throws some really stubby punches, and while it’s probably smart to not exaggerate movement and overreach in an actual street brawl, it doesn’t make for the most satisfying looking and feeling combat in a videogame. Ex-soldier Nikki Rage has a few kicks in her repertoire that look like there’s no weight whatsoever behind them and high school kid Ashley King suffers from a few unconvincing looking fighting animations as well… but let’s cut him some slack – he’s just a kid. 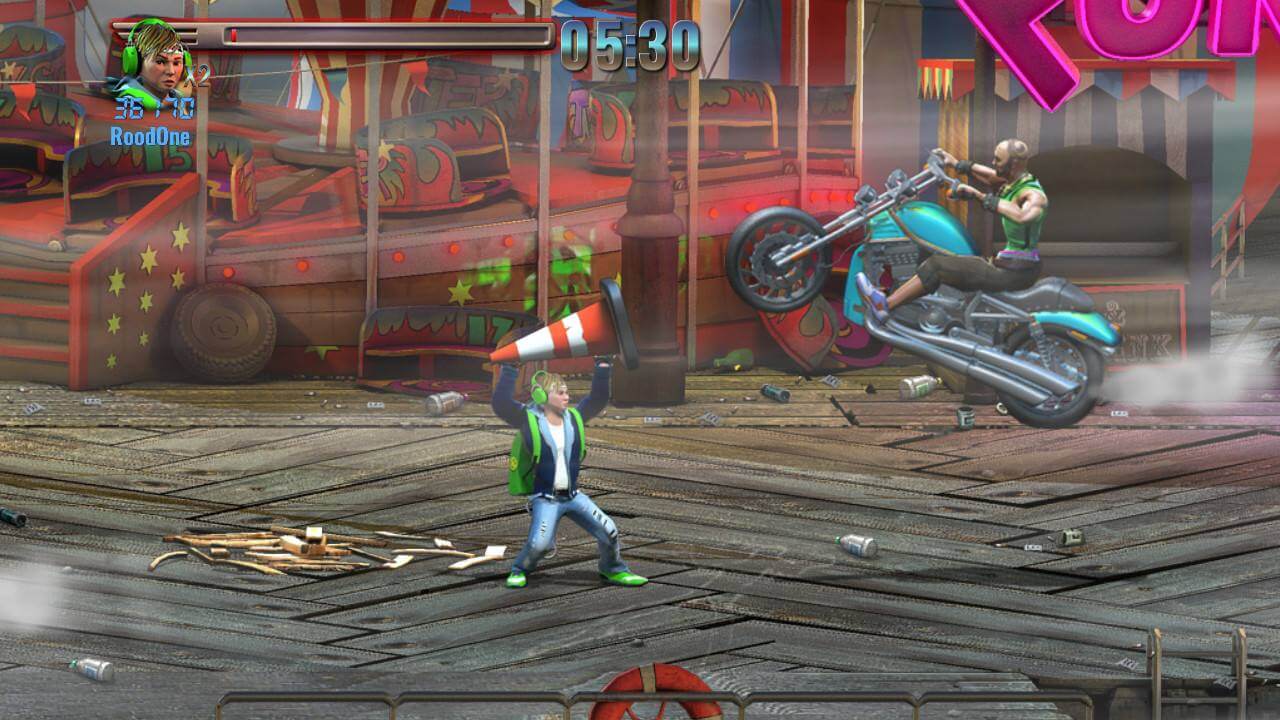 Worse yet is that at least two of the game’s handful of bosses have long periods in which they can’t be hurt, either when they are carrying out prolonged invincible attacks or during the times where they call in cronies or pull other shenanigans and hang back. I’ve experimented quite a bit with special attacks, dash attacks and weapon attacks, hoping there were clever counters to their annoying behaviour, but came up with nothing in the end.

It’s only when I set back the difficulty to ‘Wimp’ and started playing together with my kid son (who picked Ashley, obviously) that I started to develop a feel for Raging Justice’s peculiar combat.

Like in Double Dragon, there is a separate button for kicks and a separate button for punches, both leading into fairly long, Final Fight- or Streets of Rage-esque auto-strings that can be mixed up between both punches and kicks for various, mostly cosmetic results. Pressing the opposite direction that you’re facing together with punch, gives you a quick back attack.

There’s also the obligatory, near simultaneous back and front hitting special attack activated by pressing punch and kick together, that saps you of some health, unless you have nothing left to give, which is your cue to go ape with said attack. Downed opponents can also be tormented with kicks or punches.

Adding to your move repertoire, which is in essence universal across all three selectable characters, is also a jump button for jumping attacks and a separate grab button for clinch attacks and throw follow ups. This button is also used to pick up weapons, which can be held on to and thrown, and to cuff dizzied opponents for a health bonus. Finally, double-tapping the control stick or directional pad left or right activates an instant invincible dash attack, complete with fancy shadow trail, and double tapping up and down initiates a small evasive roll up or down the screen.

In a nod to Konami’s Vendetta (also known as Crime Fighters 2), there is a huge variety of weapons to pick up, including all sorts of melee tools that smack foes against the background scenery, a shotgun and even vehicles like tractors and electric lawnmowers to run goons (or your co-op partner) over with. All these resources wear out rather quickly, however.

If there is one thing to say in favour of Raging Justice’s combat, it’s that unlike Double Dragon Neon and its polygonal 3D character model facilitated animations, it feels swift and brisk and the game is at its best when you stay mobile, knocking down one fool and stomping him out, before dashing into an oncoming crowd of other no-gooders, picking up a sledgehammer that fell out of the hands of a knocked down crook and flinging it at the dodgy raincoat wearing character on the other side of the screen who’s about to throw a stick of dynamite in your direction. In fact, it’s the weapons in particular that feel the most satisfying to use, above everything else.

I never found the fighting mechanics to be exacting and precise, however they were flexible enough to make them bend to my will and get the desired results, even though the large crowds of overlapping enemies (and a co-op partner) and the multi-use grabbing button isn’t a good combination, and can definitely throw a wrench in your cunning plans. Get a feel for the flow of battle in Raging Justice, however, and the higher difficulties suddenly become a more exciting prospect.

Raging Justice contains nine brief enough stages, that can be re-attempted at any point under the conditions (health, amount of lives and remaining credits) of your most recent playthrough of them and online leaderboards, driven by the bonus points awarding challenges given per stage (beat boss under X minutes, grab Y amount of point items, beat stage under Z amount of minutes, etc.).

Only the challenge to arrest specific scallywags feels a bit like a crapshoot, as it’s quite easy to kill perpetrators before you can even dizzy and cuff them for your ‘Good Cop’ bonus points. There’s also a Horde Mode style ‘Brawl’ mode for if you can’t get enough of inflicting pain on street dwelling miscreants.

At this point, the often mentioned sense of repetition that the old school scrolling beat ‘em up genre is usually associated with might start to set in. But why is that? 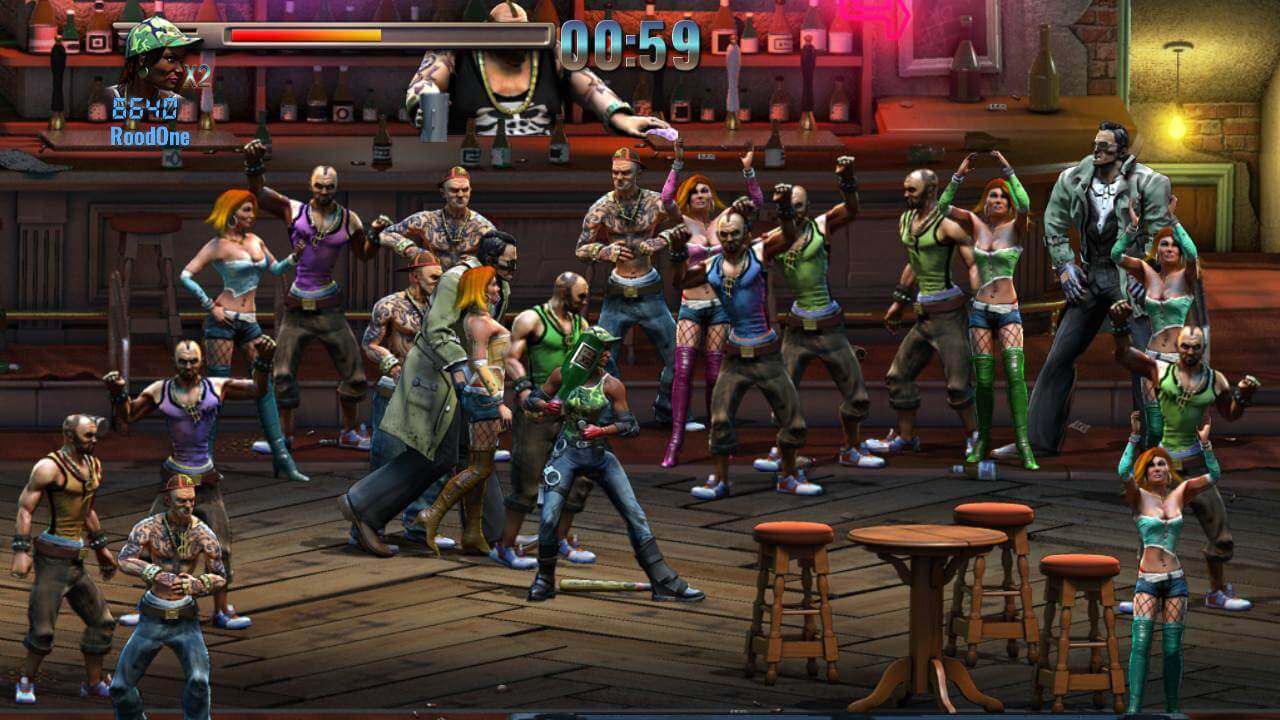 Why is it that eight hours into a more modern brawler like Ninja Gaiden Black, every new confrontation with a group of enemies still feels so fresh and exciting? The answer, of course, is because of a great increase of depth, in the form of more reactive and versatile enemies, larger move sets, greater possible combo experimentation, reliable defensive options and safe approaches beyond kiting and running away (and the evasive roll in Raging Justice certainly doesn’t cut it) and a variety of locales that change the conditions of fights significantly.

Later scrolling beat ‘em ups like Guardians, Capcom’s Battle Circuit, but also Noise Factory’s Sengoku 3 were attempting to expand to something approaching that level of depth more closely, but Raging Justice has planted its feet firmly and defiantly among the likes of Final Fight and Streets of Rage and makes a clear statement that this is the place where it wants to be, even though we’ve seen other recent throwback beat ‘em ups like Fight’N Rage by Sebastian Garcia, that focus on more ambitious, fighting game style combo systems.

But there is no sense in talking too much about the game that Raging Justice isn’t. If we grant it its throwback status, where does this eye-catching and very entertaining old school styled brawler stand among the pantheon of games it’s so heavily informed by and pays such loving homage to?

Due to some unnecessarily annoying boss fights and combat that lacks overall polish, a bit below Final Fight and Streets of Rage 2, I’m afraid. It also doesn’t help that Raging Justice has a very minimalist soundtrack that sounds like 80s style synth and rock backing tracks, without some actual melodies added in, resulting in music that fails to instill a sense of forward drive and/or smoothen over the game’s shortcomings.

With all that said, Raging Justice feels quick, responsive and satisfying enough to play, especially with a friend at the ready to grab a second controller, and if a brand new early 1990s-style brawler that falls a bit behind the greats of that era suits you just fine, then this throwback beat ‘em up isn’t a hard sell.

Despite my criticism I feel that, bad first impression aside, I got at least out of it what I was more or less expecting.

Raging Justice is available to download now for PlayStation 4, Xbox One, PC, Mac and Nintendo Switch priced around £10/€13/$15.