Almost a year ago I was tempted to hold up my hand for a download code of Solar Sail’s Smoke and Sacrifice for the Nintendo Switch, for the purpose of a review on Cane and Rinse’s website. But I simply couldn’t, as I had too many time consuming games to play for the podcast and with Smoke and Sacrifice being tagged with the RPG label, I figured it needed a substantial investment of hours for me to be able to give it a fair shake.

Colour my surprise then, that we were offered another review code for the same exact game a few weeks ago, only this time for the PlayStation 4 version. And since the podcasts I’m on this year are covering games that I’ve either already played through before or aren’t the lengthiest of experiences, it all seemed too fateful a set of circumstances to ignore.

So what was it then, that even tempted me to bite for that review code, last year? Simple: the highly detailed hi-res 2D art style as showcased in the game’s trailers and screenshots. To this day, and having spent many an hour with Smoke and Sacrifice, I find it all very reminiscent of the work of George Kamitani and his Vanillaware studio, in terms of graphical techniques. While lacking some of the animation flourishes of games like Muramasa: The Demon Blade and Dragon’s Crown, you’re getting the same kind of sense of an intricately detailed world of storybook illustrations come to life, right down to the manner in which characters move across the screen and artwork flashes red when under attack. 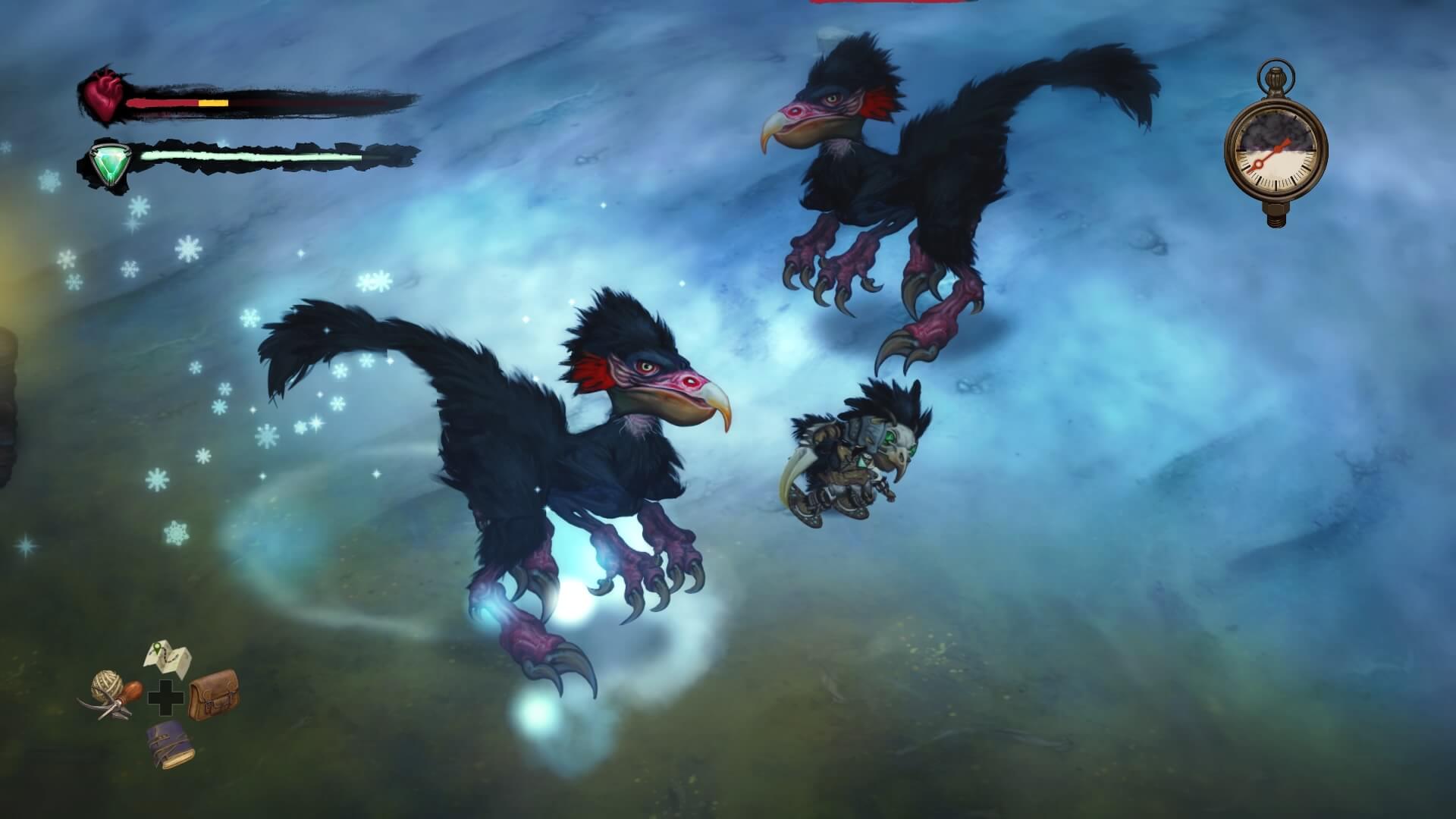 Smoke and Sacrifice conveys an atmosphere all of its own, however. A rural community seemingly inspired by the wider Tibeto-Burman culture and sustained by the warmth of an electrical “sun tree”, quickly makes way for a hostile and (literally) toxic, smoke besieged underground world of swamps filled with sickly, gnarly trees, snow covered battlefields of yore, industrial, metal floored areas and lava scorched terrain, where sinister ghosts, rampaging spiked boars, birdlike “raptors” and armoured pug bear guards potentially lead every expedition to a lethal outcome. 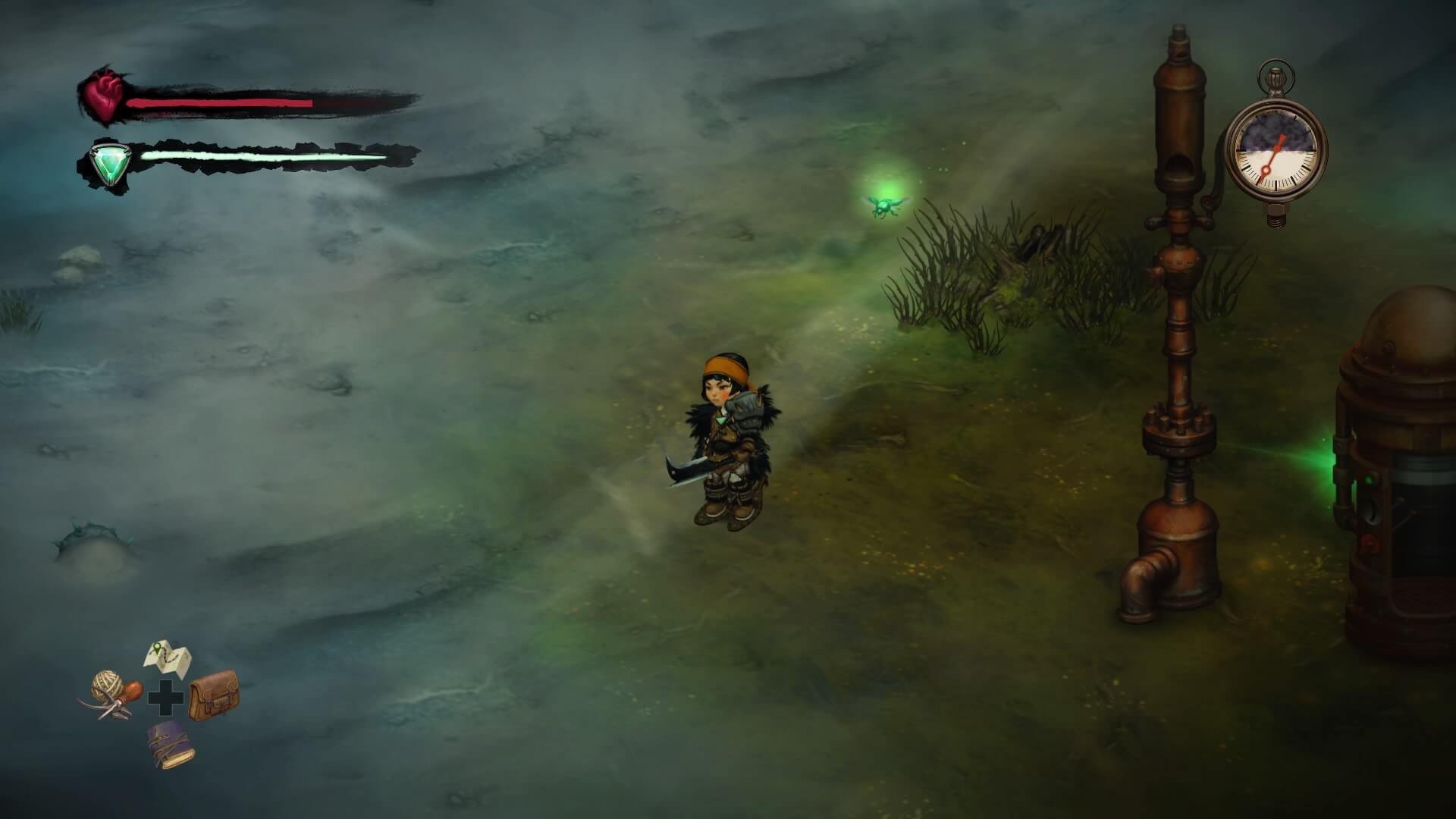 But let’s start at the beginning. Smoke and Sacrifice refreshingly puts you in the footwear of a mother called Sachi, who, as custom in her community has it, was forced to sacrifice her first born child at the altar of the Sun Tree, in order to keep the lights on. Seven years later, a disastrous event leads her to discover that her community’s firstborns aren’t dead but are forced to work for the priests in a secret world below and now she descends on a search for her son Lio, who should now be seven years old… if he’s still alive.

With the faux-isometric perspective, the 2D art style, the way your inventory menus are laid out and the emphasis on crafting, comparisons to Klei Entertainment’s Don’t Starve are easily made. But there is no hunger meter or other hardcore survival component – maybe save for that half of the clock cycle that introduces poisonous smoke and requires you to carry a light source around – and food is really only used to replenish Sachi’s health and ‘magic’ meter. Smoke and Sacrifice isn’t really much of an RPG either, as there is really nothing in the way of stat or number crunching or raising the level of your character. In essence, this one comes closest to a Zelda-style action adventure, sans dungeons. Progress is mainly dictated by unlocking crafting recipes for better equipment, either by finding them or by performing tasks for characters. Better equipment enables you to uncover and brave more and more of the hostile map, which eventually should lead you to Lio and the conclusion of your adventure. 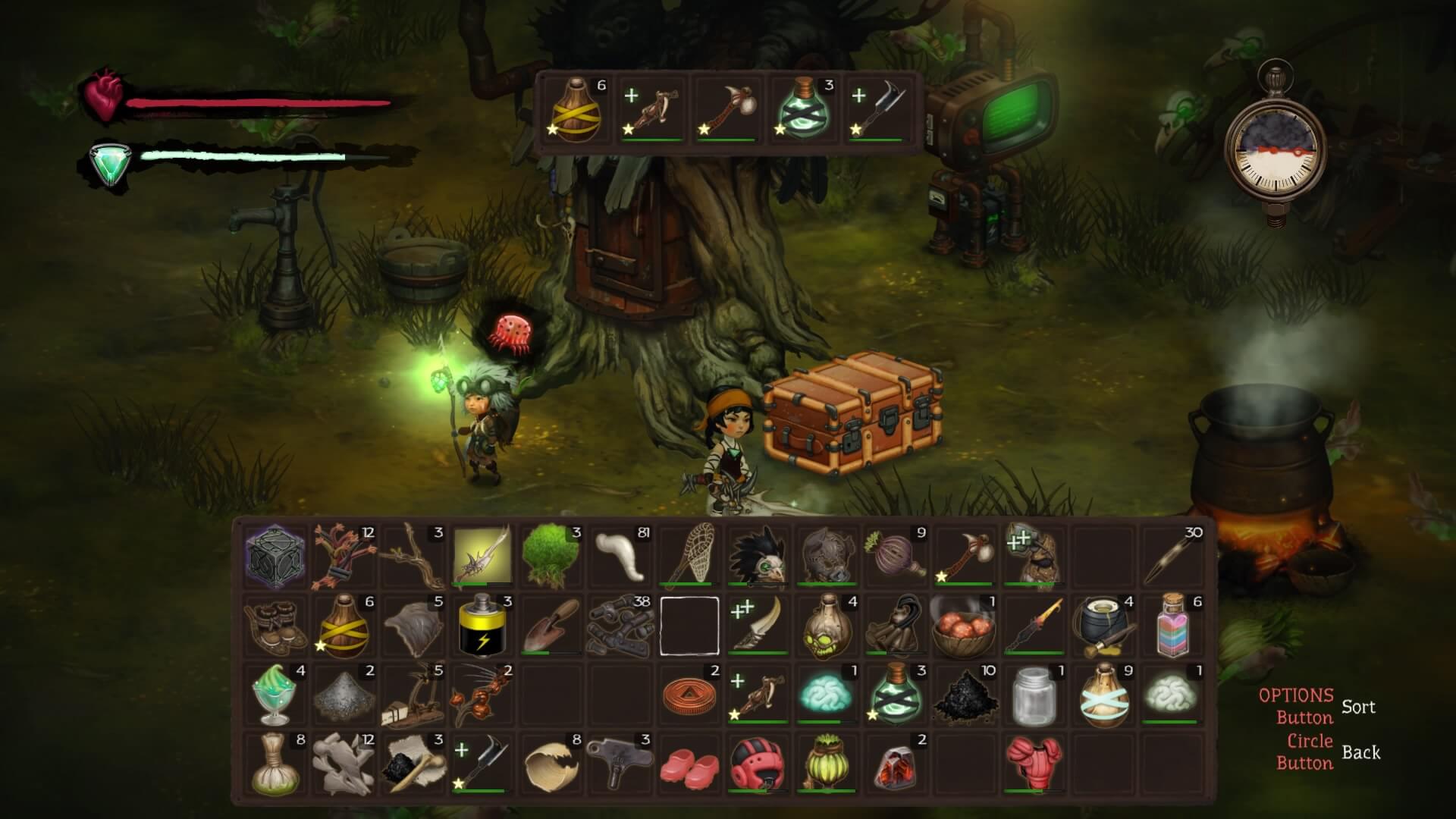 With its unceremonious in-engine cutscenes, lack of spoken dialogue, rather minimalist soundtrack, limited pool of otherwise beautiful art assets and relatively slow going progress, typified by a lot of roaming around, fighting creatures and gathering ingredients and resources, you could certainly make the claim that developer Solar Sail is attempting to do a lot with very little. It is to the developer’s credit, then, that Smoke and Sacrifice managed to compel me and hold my attention pretty much throughout. 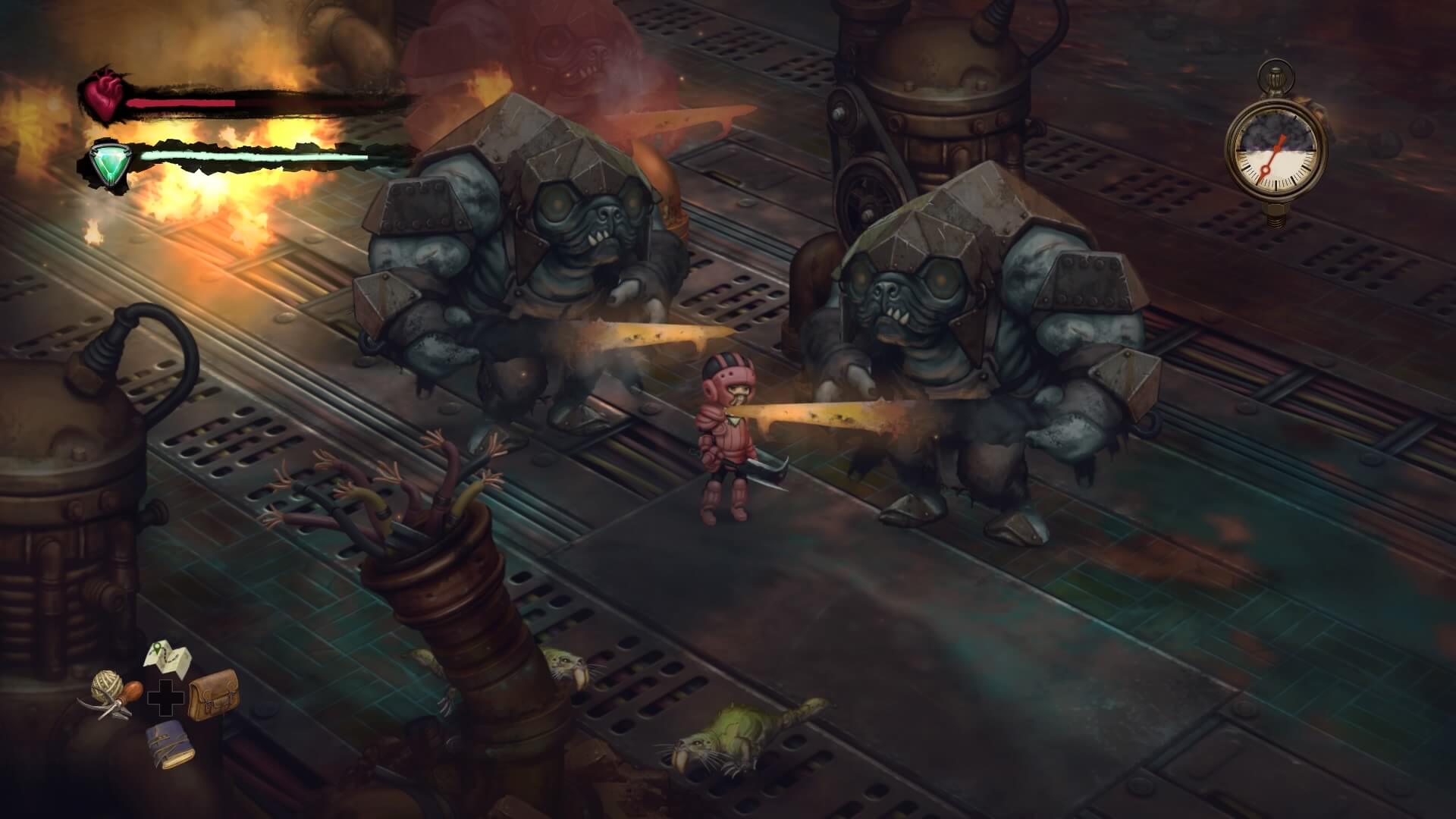 Though the storytelling is as minimal as the game’s music, you’re given just enough threads to remain at least somewhat intrigued. The combat initially comes down to poking at things and dodge hopping or running away to avoid retaliation, but various bomb and projectile weapon recipes offer enough room for a range of offensive tactics versus the ferocious enemies in the game and it’s very satisfying to use the right combination of elemental attacks to make short work of the tougher creatures, with accompanying visual effects to enhance the carnage (and it’s even possible to tame some foes and have them fight alongside you!). But the best thing about Smoke and Sacrifice is the payoff of finally getting that last elusive ingredient for a powerful bit of gear together, equipping it and using it to clear a path through what were once insurmountable obstacles.

Sure, you might have done similar things in other games and those mechanics might have been executed with more polish, pizazz and intricacy… but you haven’t done them in the eerie and beautifully illustrated pop-up book like setting of Smoke and Sacrifice and you haven’t done them as a battle ready mother, hellbent on reuniting with her abducted son, while she overthrows a wicked system of oppression in the process.