Finding an interesting game for the PlayStation Vita on launch day should have been easy. Unfortunately, the selection of re-hashed and re-packaged games just didn’t hold much of anything for me. Try though I might, my thorough search for a copy of the only re-hashed and re-packaged game that did interest me, Lumines, was painfully fruitless. With a furious diatribe against the current high street retail situation in the UK burning in my chest, I turned to the PlayStation Store. Thankfully, my anger was quelled by the pocket gem that is Tales From Space: Mutant Blobs Attack!!! (sic)

The second in DrinkBox Studios’ Tales From Space series, Mutant Blobs Attack!!! is a throwback to sci-fi and monster films of the 50’s and 60’s, in the form of a 2D platformer. This starts out fairly innocuously, but the game revels in its influences by the end. So much so that it’s nigh-on impossible to avoid all the nods to books, games and films littered throughout. Usually, I’d be disappointed to fall into the trap of defining a game purely through comparison to its forebears, but here it’s an absolute necessity… more on that later.

The format is standard enough, six “worlds” with anywhere between three and five levels (plus a bonus level) in each. Simple, and that’s exactly how the platforming starts out too. Mutant Blobs Attack!!! won’t win any prizes for its platforming; it’s a slow and undemanding process to maneuver Blob (the protagonist, a green blob, is resolutely nameless) around the environment. The mildly distinctive aspect is that Blob has to absorb items from its surroundings in order to grow large enough to devour the cork blocking the path onwards. Obstacle avoidance, puzzle solving, backtracking (to consume larger items) and finding collectibles are de rigueur, and all are present here.

Truth be told, the first world was uninspiring, and I was disappointed with how straightforward it all was. But this was simply a scene-setting exercise. You see, the effect of the story’s set-up is only really appreciated once the introduction of the basic mechanics is out of the way. There are two changes to the standard platforming levels that provide some pleasant variety, even in the early stages. The first are zones with effectively zero-gravity that have the player propel Blob around by expelling gas (not as flatulence-centric as it sounds). Movement becomes quicker and more frantic, bringing with it a change in the game’s rhythm, though what you’re doing is essentially the same. The real diversion, however, are the bonus levels. The perspective shifts to a top-down view and DrinkBox introduce one of their few concessions to the Vita’s particular toolset: tilt control.

Whilst touch control is a neat addition to allow the player to move platforms around the screen, opening paths and protecting Blob from dangers, the tilt control is elegant and precise. The idea is to move Blob around by tilting the 2D plane on which he sits, eating items and avoiding holes or obstacles. So far, so very mercury maze (or Monkey Ball for the younger, more safety conscious audience). The first bonus level I encountered was a real challenge requiring a steady hand and subtle movements of the Vita. I really can’t stress enough how precise the tilt control Mutant Blobs Attack!!! is. Once acclimatised to these levels I was able to notice another wonderfully subtle touch – each bonus level is presented through a distinctive aesthetic filter that mimics the screen of a different handheld system from eras bygone. 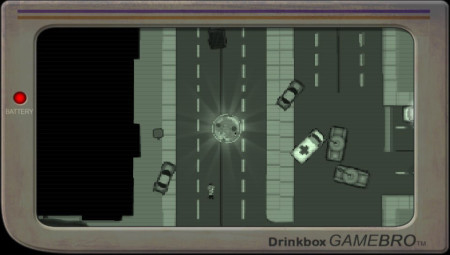 Be it the green/grey and black of the “GameBro”, or the wonderfully retro “Blob-o-matic” these levels are a clear sign that DrinkBox have designs on paying homage to, well, just about anything and everything that inspired them. Be it Arthur C. Clarke, Angry Birds, Godzilla or King Kong, the direct influences are soon coming thick and fast. Without substance, these would be no more than empty promises, but in the latter half Blob turns on the charm.

Blob grows bigger through the course of each level, and from modest beginnings devouring cups in the university lab from which he escaped, he would eventually be snacking on cows, cars, helicopters and, latterly, tanks. This aspect had me in mind of the equally cute and hunger-driven alien, The Maw, but there’s an even stronger parallel to be drawn. Blob’s story is told through newsdesk reports following the mayhem he is wreaking and they allow the art style to shine. The strong art and the weirdly abstract sense of narrative in this game brought Insanely Twisted Shadow Planet to mind, and that’s no small compliment. In particular, the TV-style framing of the screen provides a distinctive, but unobtrusive vignetting to the look of the game. It gives an enjoyable impression of voyeurism to the series of events surrounding Blob’s escape that is matched by the look of the top-down bonus levels (see left and above).

So, there it is: short, charming and dripping with references that any fan of 1950’s sci-fi should appreciate. The slow start is lamentable, but easily overlooked. The music is perhaps best described as whelming (underwhelming would be too harsh) – aside from a cracking end song by MEGASHAUN that can be found… here! But I was pleasantly surprised by Mutant Blobs Attack!!!, and if you have a Vita, a few hours to spare and could use a game that’ll put a smile on your face, you should be too.